At a university derided by some as a "Kremlin on the Charles," President Donald Trump's election is casting some classes and curricula in a new light.
By Amy L. Jia and A. Daniela Perez 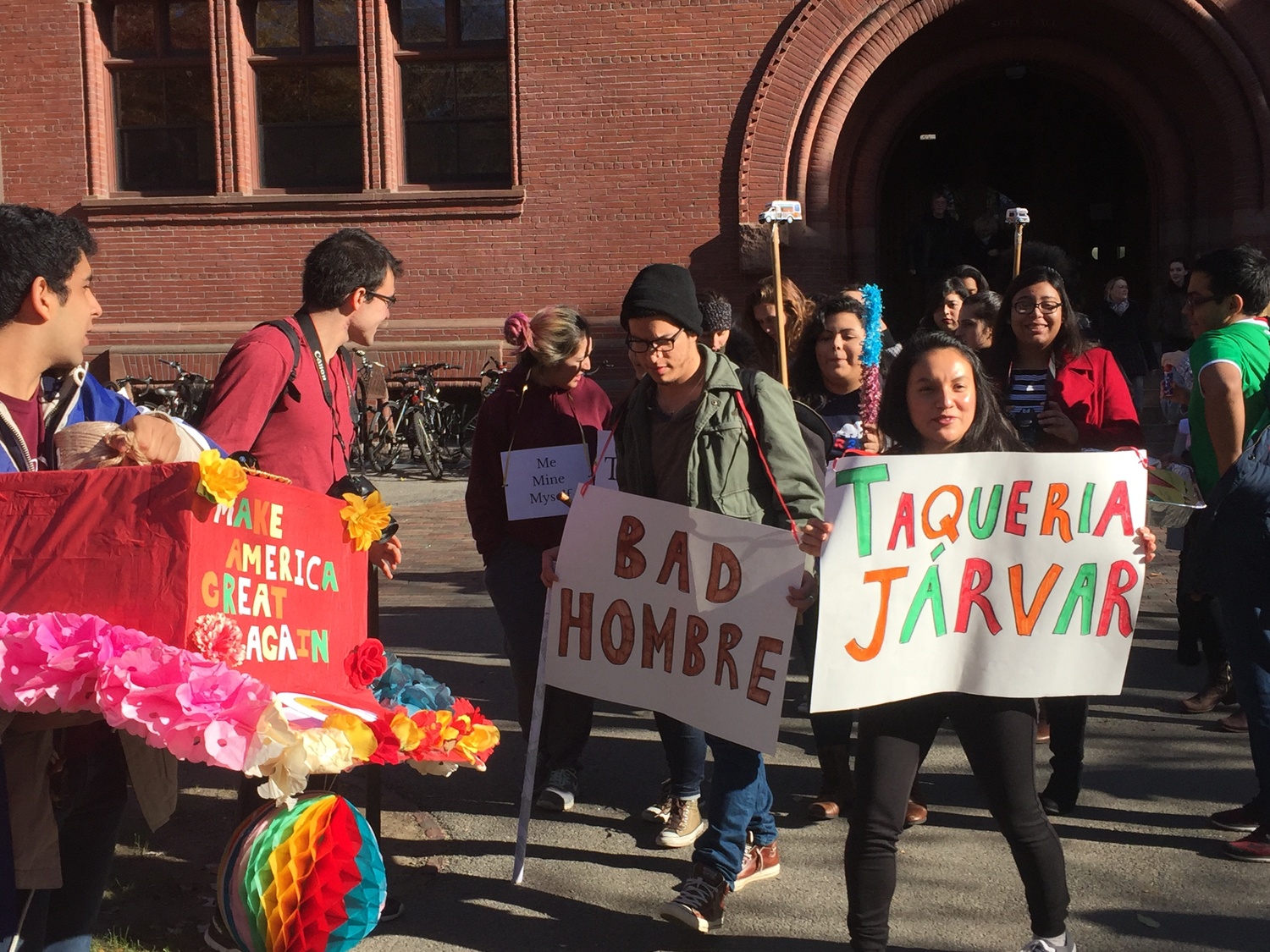 Students in Spanish 126: 'Performing Latinidad' process through the yard in Nov. 2016 as a part of a performance piece exploring experiences of Latinos in the United States. By Sidni M. Frederick

When Government and Sociology Professor Theda R. Skocpol learned Donald Trump would be the 45th president of the United States, it was the middle of the semester for USW 31: “American Society and Public Policy,” a class she co-teaches with Sociology Professor Mary C. Waters.

Skocpol said the themes of the class, which examines how policy issues and inequality manifest in American society, had come to national prominence throughout the contentious 2016 campaign season. Shortly after the election, she met with enrolled students outside of regular course hours to debrief.

“The outcome of the election was a surprise to a lot of people, and so we scheduled an extra meeting to talk about what some of the kinds of social trends that had been at work in the election might be, although that was at an early stage where there hadn’t been a lot of time for people to gather even all the data, let alone reflect on it,” Skocpol said.

While Trump may have given new relevance to some issues in the course, Skocpol said the idea that Trump would change how or what professors teach at Harvard is “ridiculous.”

“We’ve been teaching that course for years, and the purpose of the course is to think about how policy issues and politics and inequality play out in American society,” she said. “We didn’t change it because of Donald Trump.”

Other instructors agreed. While Trump’s election may have shocked academics and students at Harvard—derided by some conservatives as a liberal enclave, a “Kremlin on the Charles”—several professors say his presidency has not fundamentally altered the way they teach their courses.

“I have been teaching at universities both before and after the Trump election, and there are some things that have changed,” History and Literature lecturer Emily Pope-Obeda said. “But at the end of the day, I think a lot of the things that are going on with this administration are actually just bringing to light tensions that existed within university spaces in the first place.”

Because of some of the Trump administration’s controversial stances—like skepticism of climate change—several professors said there is a need for increased dialogue about these issues in the classroom.

Environmental Science and Engineering Professor Daniel P. Schrag, a former member of President Barack Obama’s Council of Advisors on Science and Technology, emphasized the importance of courses on climate change such as Science of the Physical Universe 29: “The Climate-Energy Challenge.”

“I think it’s really important that every Harvard student has access to a really good course on climate change and how to solve it with energy technology,” Schrag said. “I’m continuing to teach this course, I think, partly because of President Trump, because I feel like we need more Gen Ed courses that are about this topic.” 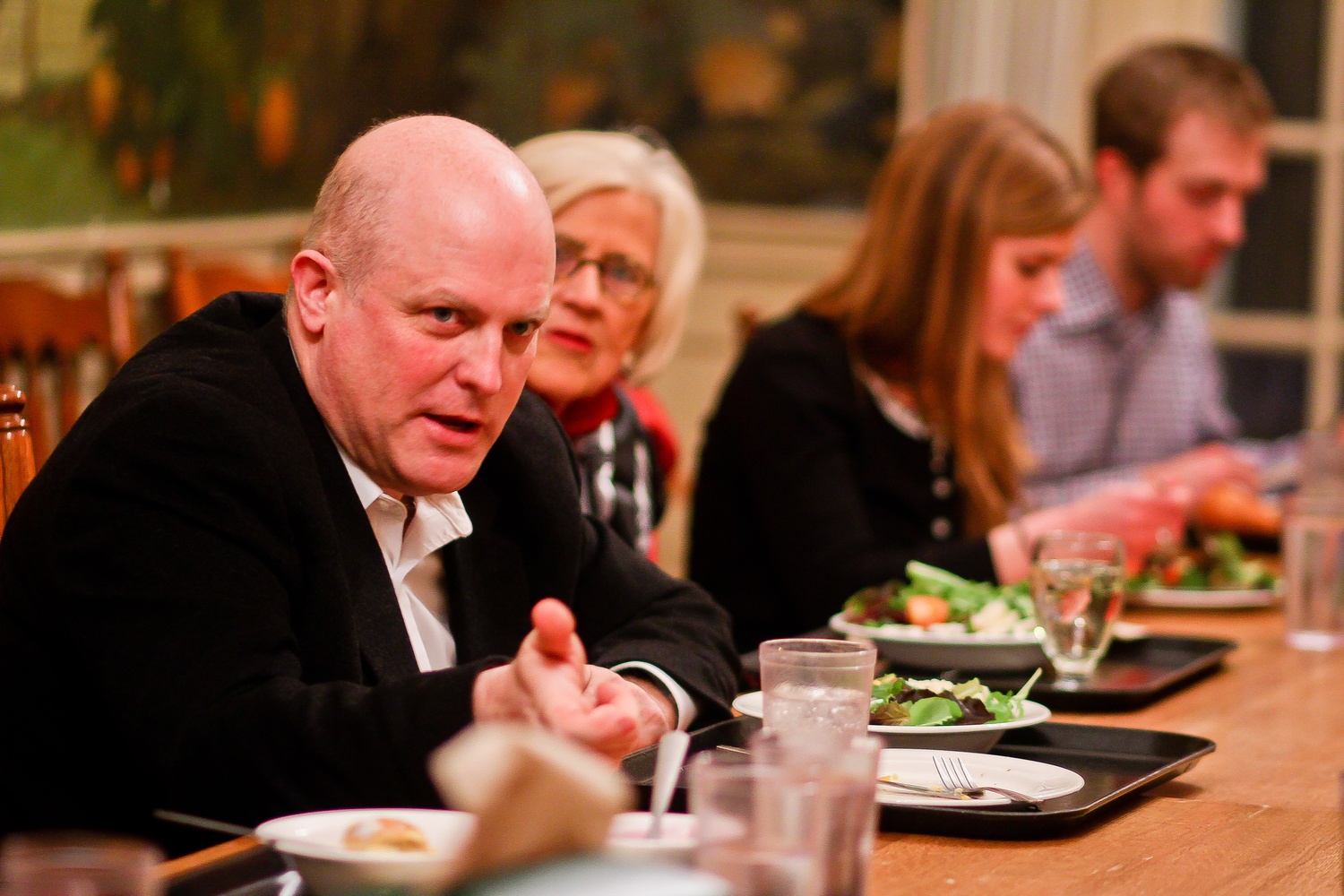 Schrag said he hopes that the Trump presidency encourages Harvard to offer more classes focused on this topic.

“Students at Harvard should understand the observations, the evidence, for why climate change is a serious concern for their future and for the future of the world, and should think about what a responsible path to dealing with it is,” he said.

Near Eastern Languages and Civilizations Professor Ali Asani, who teaches courses on Islam, said he thinks Trump’s presidency emphasizes a high degree of “religious illiteracy” in the United States.

“One of the things that I’ve done in trying to teach about Islam, especially my Gen Ed courses, is to create an awareness of this broader spectrum, and that when people hear things in the media about any sort of declarations about Islam, no matter by whom, they should be asking about which Islam, whose Islam, in which context,” he said.

In January 2017, Trump signed an executive order barring immigrants from seven predominantly Muslim countries for 90 days. In wake of the order, some Iranian-American Harvard affiliates said they felt unwelcome in the United States.

Asani said that, in his courses, he hopes to provide historical context so students—both Muslim and non-Muslim—will realize the situation will not always look so “bleak.”

“I sought on the one hand, in my courses, to provide students who are Muslim who are taking my courses, a sense [that]… history goes in waves,” he said. “It’s cyclical.”

Khalil G. Muhammad, a professor of history, race, and public policy at the Kennedy School of Government, said he found that although much of his syllabus for Democracy, Politics, and Institutions 931: “Race, Inequality, and American Democracy” remained identical to that of past years, Trump’s election and presidency has offered additional opportunities to tie historical issues to contemporary ones. 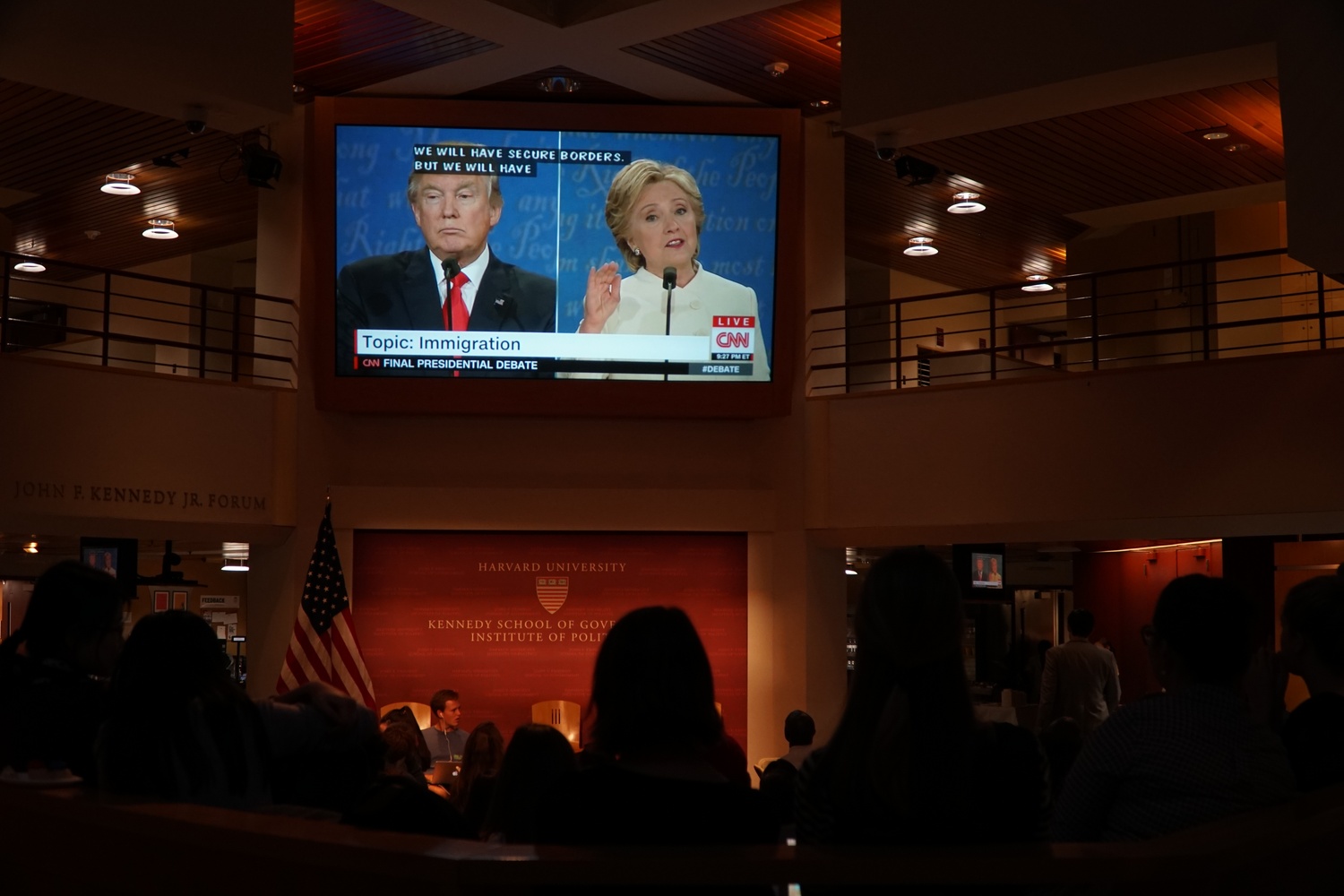 Students watch a presidential debate at the Institute of Politics in 2016. By Ryosuke Takashima

“My syllabus was mostly built before the election, and the content of the course has a large focus on history, particularly United States-based anti-racist ideas, practices, and policies. And, as such, whether Trump were president or not, 95 percent of the content would be there anyway,” Muhammad said. “That being said, because Trump has been so articulate for a set of ideas that have been recurring in American history, he and his positions have been very prominent, contemporary examples that connect the past to the present.”

“I think, in many ways, it is an ethical imperative for being educators in a time when you couldn’t ask for better material to illustrate how important these issues are,” he said.

In addition to necessitating increased dialogue, some Harvard faculty say the Trump administration's actions over the past year mean there is a need to represent a more diverse set of narratives and viewpoints in their classrooms.

“I think what’s frustrating and overwhelming to a lot [of students] about what they’re seeing in the news is that there isn’t that diversity of representation. These voices aren’t being portrayed,” Pope-Obeda said. “So what we end up talking about is how much more you can see when you read somebody’s story than you can from seeing pictures in the news.” 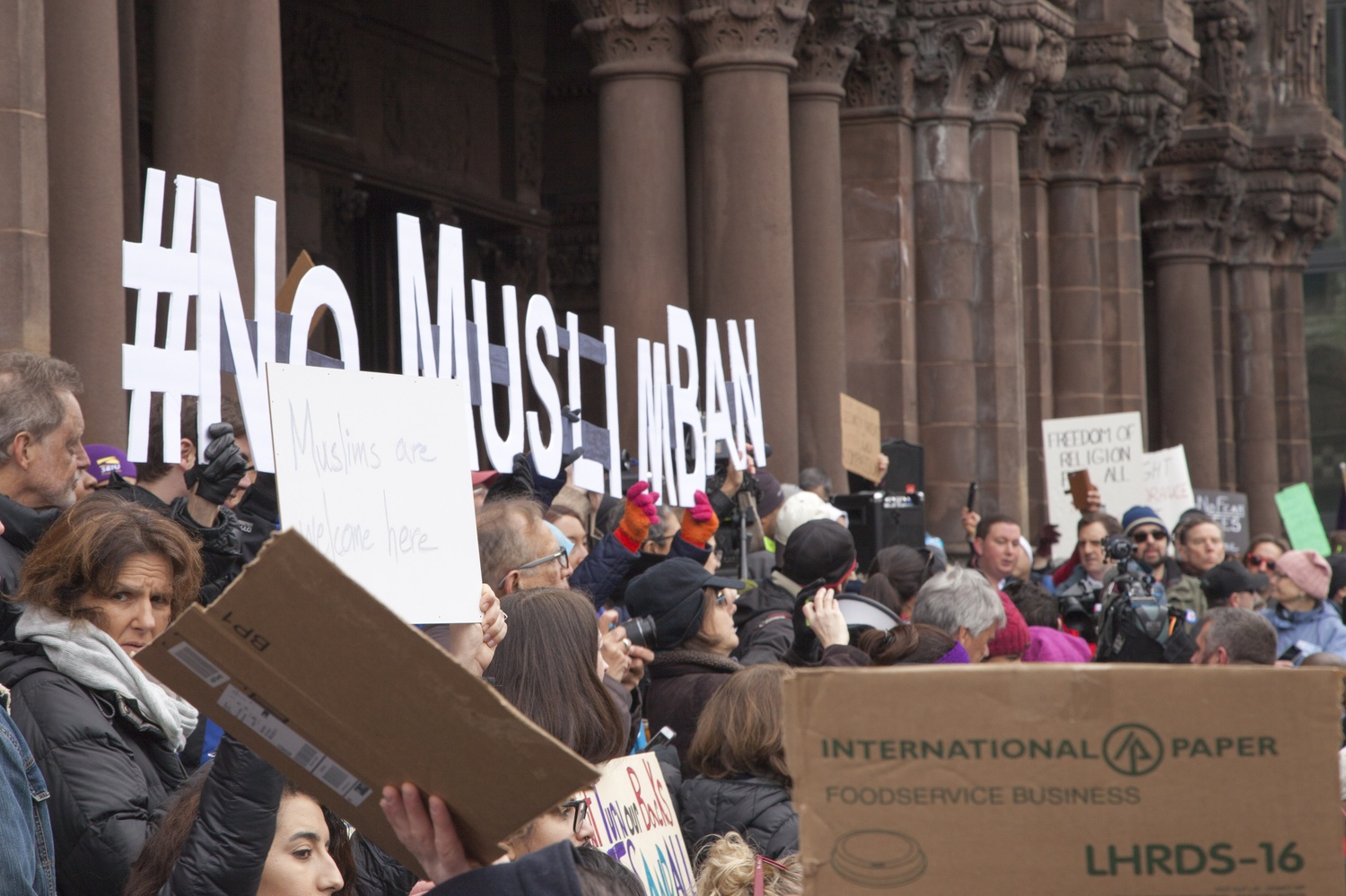 Pope-Obeda, who teaches History and Literature 90CT: “Deportation and the Policing of Migration in U.S. History,” said it is important to read texts that represent the diversity of voices in underrepresented groups, as opposed to works that simply state how these groups have been affected.

“I think it’s really important to have a syllabus and curriculum that doesn’t just show the events of the time period, but also shows the discussions,” she said.

Tali Zechory, a preceptor in French, said the humanities are an important area in which to engage with politics.

Government and African American Studies Professor Jennifer L. Hochschild said she has worked to include viewpoints she personally disagrees with in her class United States in the World 15: “Race, Ethnicity, and Immigration: From Obama to Trump.” Trump has also inspired a change to the subtitle of the course—it used to be called “Is the American Racial Order Being Transformed?”

“I’m trying to incorporate, probably more seriously than I have, genuinely conservative views into the class, because clearly, this country is much more mixed on issues of race, ethnicity, and immigration than I at least would like it to be. But again, I feel like my responsibility as a professor, [and] students’ responsibility as students, is to engage with people they disagree with,” Hochschild said.

“The course definitely has the same structure, but it’s that some of the topics resonate more—or have new meaning—now than they did before,” he said.