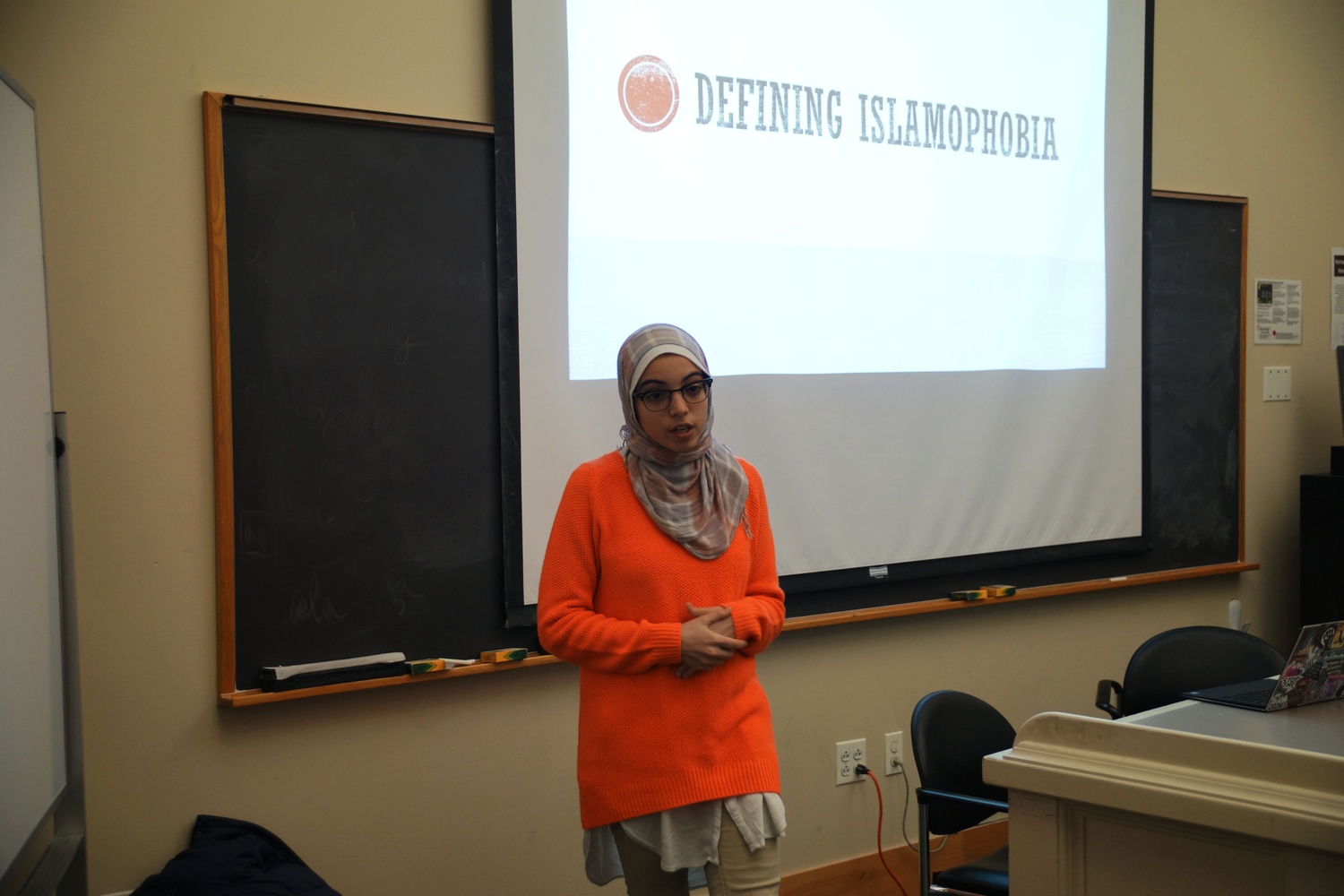 Anwar Omeish ‘18 gives a talk on Islamophobia as part of the Stand Up With Our Muslim Neighbors event held at Boylston Hall Monday night. By Zennie L. Wey
By Alice S. Cheng and Kristine E. Guillaume, Crimson Staff Writers

Harvard Hillel and the Harvard Islamic Society hosted a presentation and panel discussion Monday, briefing attendees on Islamophobia at Harvard and around the United States.

The event, called “Stand Up Against Islamophobia,” was the first in a series of events hosted by Harvard Hillel called “Stand Up,” aimed at engaging Harvard's faith groups and addressing discrimination against religious minorities.

The first portion of the event was a presentation from Director of External Relations of the Harvard Islamic Society Anwar Omeish ’19, which discussed the existence of institutionalized Islamophobia, defined by Omeish as structural discrimination based on race, culture, religion, or identity.

Omeish said her group was engaged in efforts by the recently-launched Anti-Islamophobia Network to combat policies that institutionalize Islamophobia.

“Islamophobia is not [just] interpersonal, it’s also structural,” Omeish said. “It extends into policies, and it has extended into policies before the Trump administration and obviously it’s worse now, but this is something that Muslim people experience.”

The next event brought together three members of the Harvard Islamic Society: Sahar M. Omer ’20, Tajrean Rahman ’20, and Saim Raza ’19. The panelists spoke about their personal encounters with Islamophobia and support from peers in their hometowns and at Harvard.

The panel also included a question and answer session during which an audience member asked what Harvard can do to help Muslim students feel more comfortable. Omeish and other members of the Harvard Islamic Society said they have met with the Harvard administrators to devise new strategies to support the Muslim students at Harvard.

“Right now, I believe that the Jewish community is in a position of great privilege,” Abouzaglo said. “As people who have experienced a history or historic oppression that now that we find ourselves more comfortable specifically in America that we have a moral conscription to stand up and ally with all marginalized groups.”

“For me, the most important allyship of solidarity is with those of fellow religious minorities in America,” Abouzaglo added.