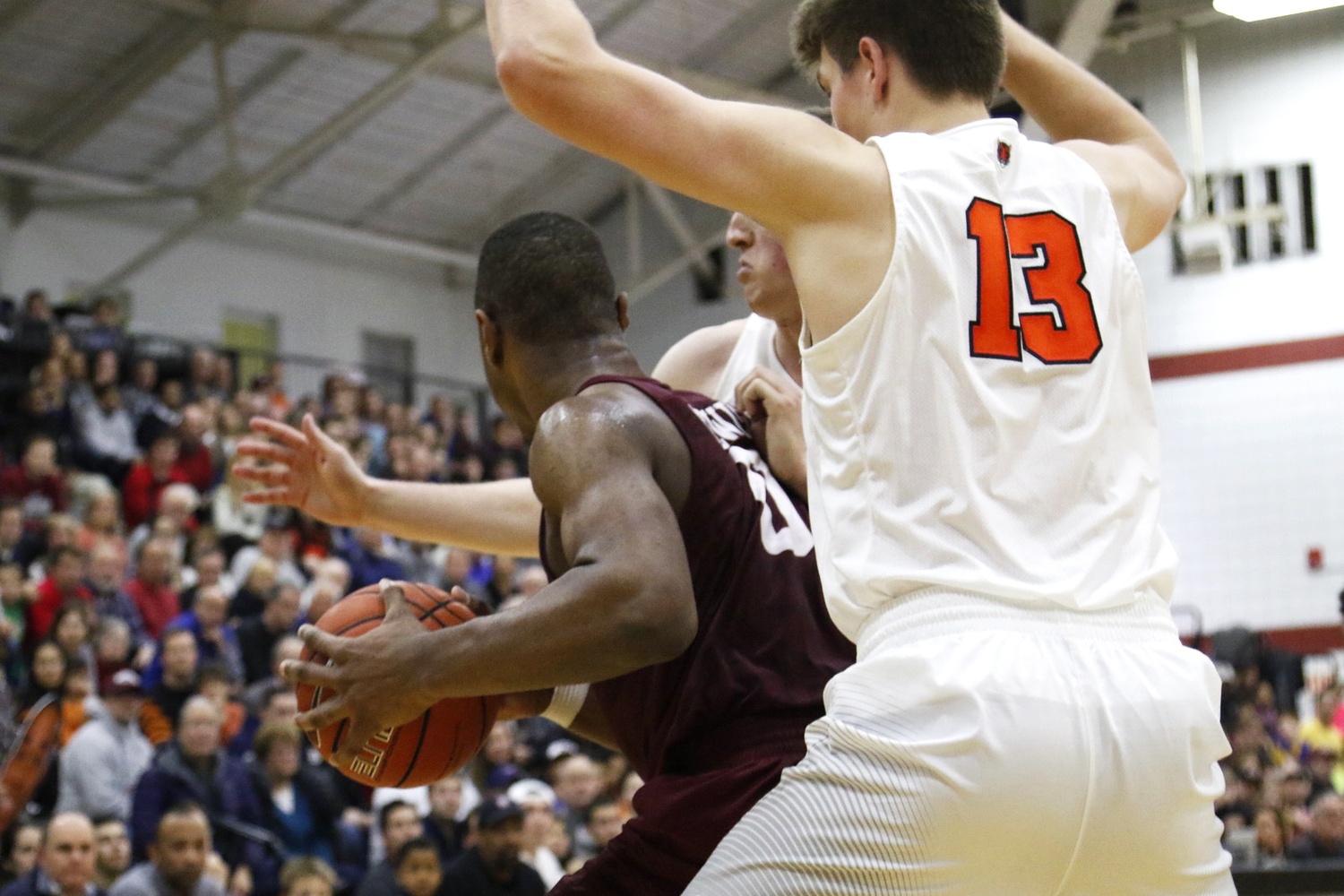 Freshman Chris Lewis and the rest of the Harvard men's basketball squad will look to defend their home court this weekend against Cornell and Columbia. By Timothy R. O'Meara
By Theresa C. Hebert, Crimson Staff Writer

The last time the Harvard men’s basketball team played Cornell and Columbia, both New York teams had the Crimson on its heels. Against the Big Red, Harvard had to overcome a 12-point deficit to eek out the eventual five-point victory. The next night versus the Lions, Harvard fell just three points shy of digging itself out of a 19-point gap, handing the team its first loss of the Ivy season.

In the two weekends since Harvard traveled to Ithaca and New York City, the Crimson is 3-1, but most importantly has started to play more consistent basketball. Last Saturday’s contest against Yale was the first time in the last six games that Harvard had not faced a double-digit deficit at some point during the game.

Some of the consistency has come purely as a result of more experience. With one of the youngest teams in the NCAA, Harvard coach Tommy Amaker noted that at times his team has lacked composure. With more games under their belt, however, the players have improved their ability to stay steady during pressure filled situations.

One example of this came in Saturday’s game against the Bulldogs. With 2:24 remaining in the game, the Crimson had a comfortable 10-point lead over Yale. A foul and a turnover, however, quickly pulled the Bulldogs back within six, with Yale freshmen Jordan Bruner and Miye Oni each scoring in the waning minutes to bring their team back within reach. Though the Crimson was still in the driver’s seat, flashbacks to the team’s collapse against Princeton the week before weren’t hard to conjure.

“I just thought sometimes when you go through that, you’re looking at the pain of that, you maybe have a little more resolve in that situation or moments like that,” Amaker said. “Maybe the next time, you’re better off for it. We went into [the Brown and Yale] weekend with a lot of emphasis on concentration, that has a lot to do with what we lacked so we really tried to hone in on it.”

Aside from the added experience in conference game situations, the Cornell and Columbia may also see new personnel from the large Crimson roster. While the big names—co-captain Siyani Chambers, freshman guard Bryce Aiken, or sophomore guard Corey Johnson—may remain the same, Amaker has continued to experiment with his lineups since the these teams last met.

Last weekend, and briefly against Princeton, that new face was sophomore forward Weisner Perez. Perez had not seen game action since Dec. 30 against Howard in which he played for one minute. Before Howard, Perez had seen seven total minutes in two games against MIT and Fisher, both Division II opponents.

But according to Amaker, Perez put in a string of strong practices that earned him a spot in the rotation, coming off the bench for 10 minutes against both Brown and Yale, tallying six points and 10 rebounds on the weekend. While it may not necessarily be Perez who sees game action this weekend, he is a symbol to Harvard’s lengthy roster that it’s never too late to earn playing time.

“Things can change so having options and getting these guys to continue to work, all being on the same page and if something presents itself for them, they can make the most of it,” Amaker said. “That’s Weisner right now, greatest example of all the things we’re talking about. He kept working and made an impression to us in practice. We had him in there and he performed well.”

Though Amaker noted that he doesn’t like using the term “role players”, having the depth that Harvard does allows the coaching staff to implement certain players on a more game-by-game basis, depending on the strengths and weaknesses of the team they are facing on a given day. One example of this has been the use of freshman forward Robert Baker to provide defensive length in the zone, with Baker having a better ability to stretch between defending the paint and the perimeter when the team forgoes man-to-man coverage.

Columbia has lost three of its last four games, while Cornell has lost five of its last six, but the Crimson isn’t taking either team lightly.

“You can never underestimate any Ivy league team and every single game they’re going to come at you with as much fight as possible,” freshman forward Chris Lewis said. “[E]very team, no matter which one in the Ivy League, every one is filled with competitors, everyone is always ready to play, knows your tendencies, your weaknesses, and if you’re not ready to come to the game prepared, they’ll exploit them.”