Athlete of the Week: Wang Back in Action with Record-Setting Performance 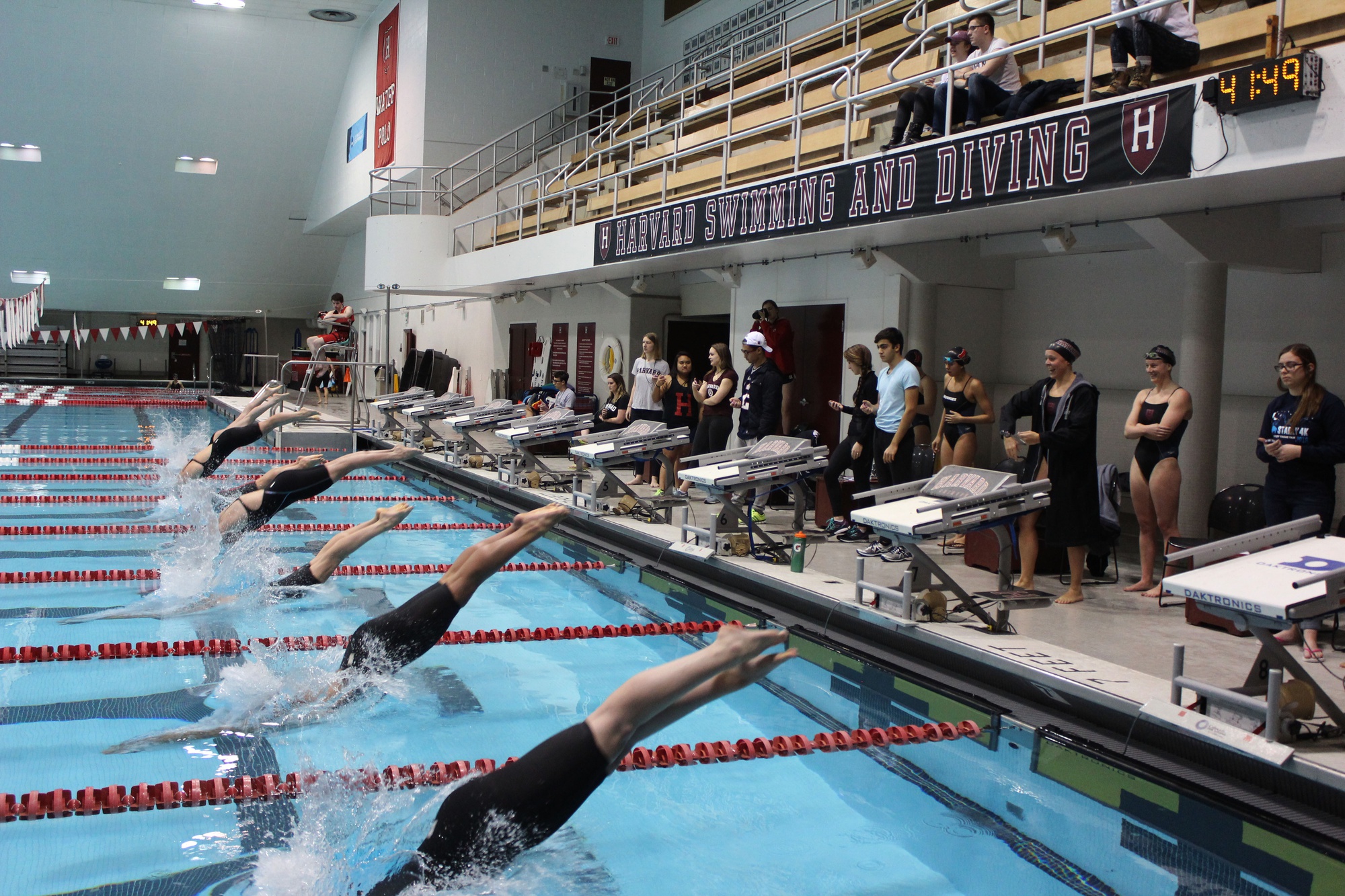 Sophomore Sonia Wang battled back from an injury to win the 400 individual medley at Ivy League Championships and led Harvard women's swimming, pictured here in earlier action against Northeastern, to a second-place finish.
By Meg Leatherwood, Contributing Writer

Sophomore Sonia Wang battled back from an injury to win the 400 individual medley at Ivy League Championships and led Harvard women's swimming, pictured here in earlier action against Northeastern, to a second-place finish. By Tiana A Abdulmassih

It is not particularly unusual for sophomore Sonia Wang to put a team on her back. The Upland, Calif. native has earned four All-Ivy League honors, qualified for the NCAA Championships, and set multiple records throughout the span of her Harvard career. Yet at last weekend’s Ivy League Women’s Swimming and Diving Championships, Wang brought unusual meaning to that common phrase.

Wang came into Friday’s 400-yard individual medley as the event’s defending champion, and she finished holding that same title. However, Wang’s victory came under circumstances distinct from those she faced a year ago. After she missed the entirety of the season up to that point battling a stress fracture in her back, the event marked her first return to the pool.

The road to Wang’s repeat title has been marked by the challenge of an injury, one that has not only been difficult to overcome, but also to pinpoint. Yet, to her teammates, Wang’s determination to compete has been evident throughout her journey.

“They don’t really know what exactly it [her injury] is, but it happened earlier this season,” co-captain Daniela Johnson Restrepo said. “She’s seen a lot of specialists, and they don’t know the actual cause of it, but it’s like a fracture. She’s been trying to rest her back, while also training, which has been crazy.”

“Her coming back, to be able to swim for the team this year was an amazing accomplishment,” co-captain Summer Schmitt said. “It speaks so much to her dedication to the sport and to the team.”

Striving to get back in the pool, Wang has dedicated herself to the process of recovering. Leading up to her return, she sought medical counsel and was instructed to rest. But Wang did not neglect her training while heeding this advice, working diligently to fight her injury.

“She’s been going to the training room,” Johnson Restrepo said. “She had to do a lot of side things to get ready for this weekend.”

Wang started the event out in front, but the swimmers to her right and left slowly began to close in on her lead as the race progressed.

“When [Wang] pushed off in the freestyle leg, I think she could see this one other girl in particular,” Johnson Restrepo said. “You could see, especially on the lap 50, that she just increased her stroke rate, really fought all the way to the wall, and out-touched the other girl.”

While other swimmers may have the tendency to lose steam as a long-distance event progresses, Wang’s teammates claim that the opposite can be said of her.

“She is definitely a distance swimmer and she comes on strong at the end,” Schmitt said. “It’s always fun to watch her race, because she fights all the way to the end.”

“Usually people get slower in the race, but she just kept on getting faster,” Johnson Restrepo said. “It was really inspiring to watch.”

Pulling ahead with her final surge, Wang was able to touch the wall first in a time of 4:14.21. Wang’s mark was enough to not only secure her title as the event’s defending champion, but also to break the Katherine Moran Aquatics Center pool record.

Wang’s performance gave momentum to a Crimson team that went on to finish the Championships in second place overall in the Ancient Eight. Overcoming injury to claim her first-place result, Wang left those in attendance stunned. But, for her teammates, Wang’s efforts in the title meet simply showcased what they already knew to be true about her.

“She’s such a fighter,” Johnson Restrepo said. “This girl is one of the greatest fighters I know of.”

“She pushed herself so hard for the team,” Schmitt said. “She did it for all of us. I hope she was proud of herself, because it was amazing.”

The Upland, Calif. native’s success wasn’t limited to the 400 IM, as she picked up two more podium finishes over the course of the meet. Wang claimed the bronze medal in both the 200-yard individual medley and 200-yard butterfly, as well.

Overcoming the obstacle of a broken back, Wang left with a broken record and a claim to back-to-back titles. Last weekend’s efforts speak not only to Wang’s skill within the pool, but also to her incredible resiliency far beyond it.

—Contributing Writer Meg Leatherwood can be reached at margaretleatherwood@college.harvard.edu.