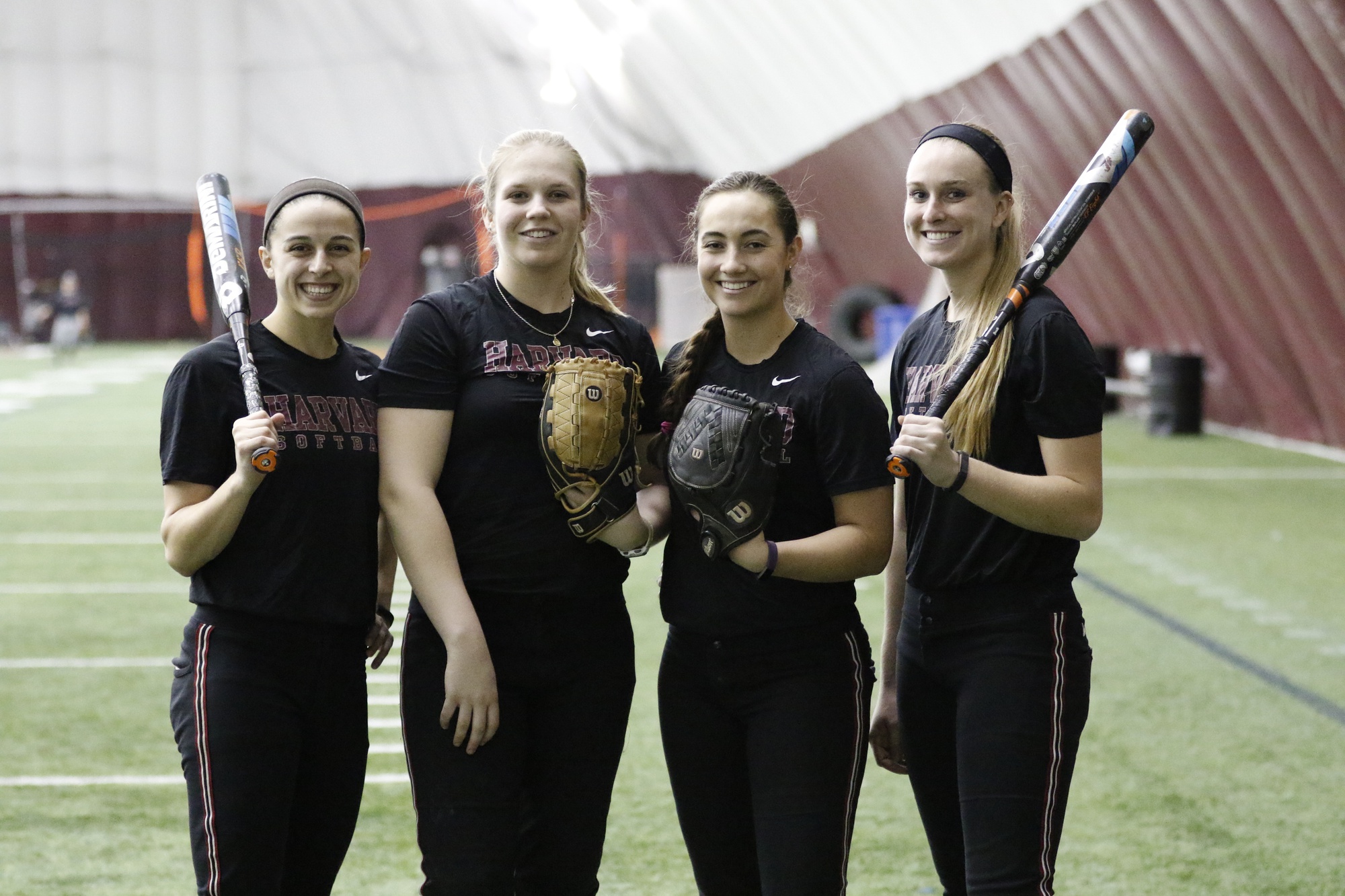 Leaders on and off the field, the seniors are pivotal in promoting team culture through study sessions and group bonding. By Timothy R. O'Meara
By Ginny Miller, Crimson Staff Writer 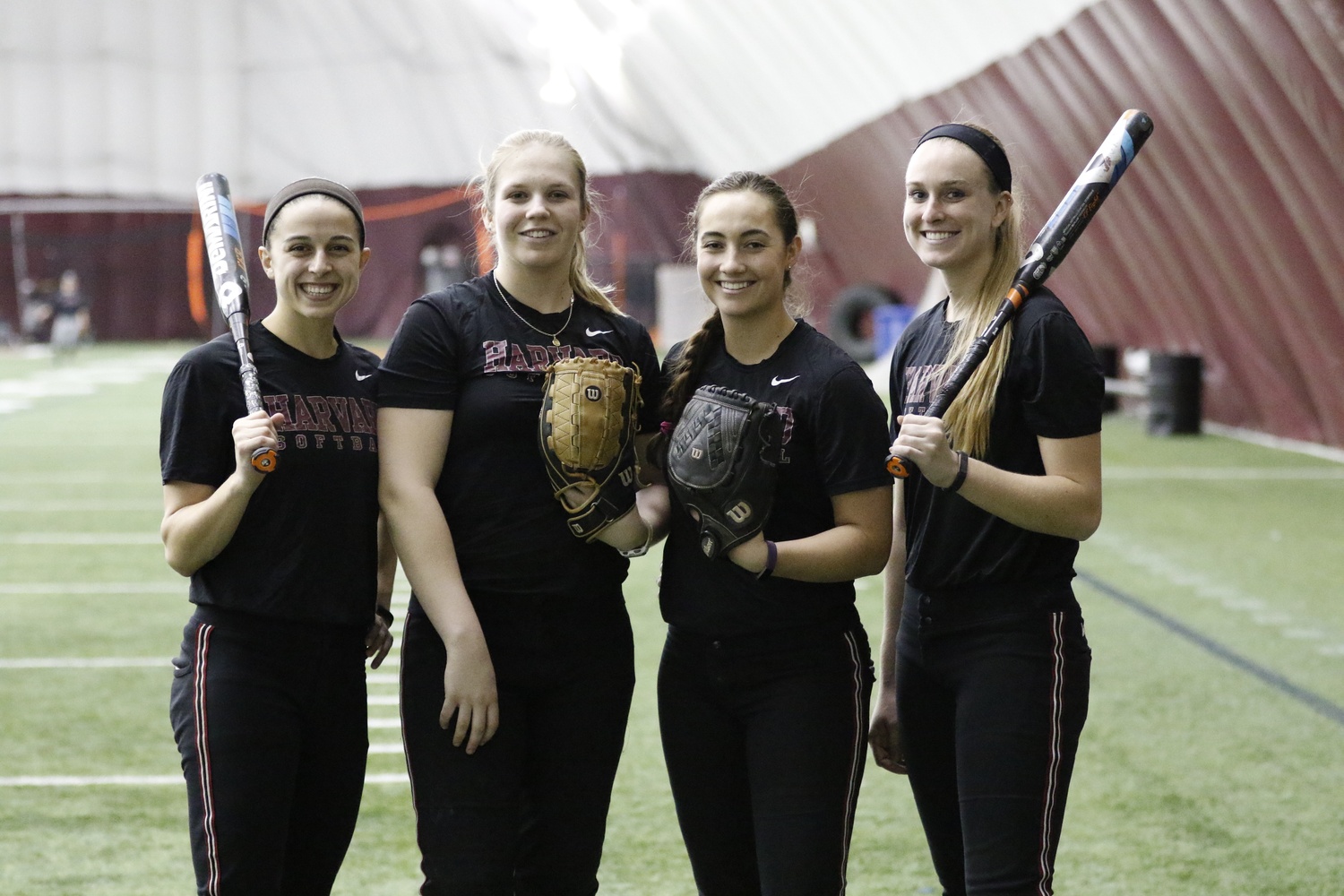 Leaders on and off the field, the seniors are pivotal in promoting team culture through study sessions and group bonding. By Timothy R. O'Meara

As the snow melts and the days lengthen, the Harvard women’s softball team prepares for the start of its season. The Crimson is ditching the infamous New England weather to open its season at the EMU Madeira Beach Invitational in Madeira Beach, Fla., this upcoming weekend.

Harvard has its eyes set on the Ivy League title that slipped through its fingers last season. The team had a heartbreaking loss to Princeton in the conference’s championship game last May. The program welcomes just five freshmen this season after coach Jenny Allard brought in an eight-person class last year.

“Last year was a turnover year,” Allard said. “We had graduated eight seniors, six of whom were starters. I feel that the now-seniors, then-juniors, really stepped up into some key roles. They had been playing behind seniors and then when those seniors graduated, it was their chance to step in and they really in their own way tried to step up last year.”

As the freshmen look eagerly ahead to the start of their Harvard softball careers, the seniors are looking back as they prepare for their last season on the diamond.

“If I could sum it up concisely, the friendships that I have formed and being part of a hardworking team with a great, gritty culture has been really fun in my time here,” co-captain Savannah Bradley said.

The class of 2017 is made up of six players with a lot of experience to their names in positions across the field.

Leslie came to Cambridge after a decorated high school career in Gilbert, Ariz. She played in 26 games as a sophomore and 29 as a junior. She split time with Bradley and was a catalyst for Harvard’s offense, chipping in multiple hits in last season’s opening tournaments as well as three RBIs and a stolen base in the Cornell series last year.

Bradley played first and pitched at Strawberry Crest High School in Tampa, Fla. During her prep career, she served as captain of the varsity softball and swimming teams before walking on at Harvard so it was no surprise when she was elected captain after last season. Bradley played in 40 games as a junior, posting a .305 on-base percentage to go along with four doubles and two home runs.

Panariello has had an impact for the Crimson since stepping foot on campus. Her breakout season was her sophomore campaign, in which she played in 37 games with 27 starts. Offensively, she hit four doubles and three home runs. During her junior year, she played in 44 contests and registered 11 doubles, finishing the season with a .318 batting average. Her consistency was key in multiple conference victories and earned her a spot on the All-Ivy League First Team.

The senior class also boasts a pitcher-catcher duo in Lindsey Hagberg and Taylor Cabe. An injury kept Hagberg from the field last spring. As a sophomore, she was able to play in nine games, with five starts, before her injury progressed. Hagberg, along with the rest of her classmates, is healthy and cleared to play for her final season.

Cabe has been a prominent player in the pitching rotation from the get-go. She recorded her first complete game, a four-hit shutout in March of her freshman season. The following year she made 27 appearances, including 12 starts, and posted a 4.12 ERA and 68 strikeouts, which ranked second on the team. Cabe had a coming out party as a junior, posting a 15-3 record and establishing herself as the team’s ace as she entered her senior season. The highlight of her junior campaign came when she blanked Princeton over seven innings to lead her team to a 1-0 victory.

The lone senior in the outfield this season is Los Gatos, Calif. native Cat Callaway. Callaway has been a key utility player for Harvard, seeing action in 40 games during her sophomore year with 39 starts coming at third base. At the plate, she batted .304 with 19 runs batted in, seven doubles, and three homers. Last year as a junior, she made the transition to left field and appeared in 39 games.

“This class has been a very solid, very reliable, very dedicated class for Harvard softball,” Allard said. “I think they have all grown in their owns ways throughout their four years. My goal for them this year is that they all have their best seasons of their careers. That is what I always hope for the seniors—they will leave putting their best season on the field.”

But just as impactful as the seniors’ stats are their contributions to a team culture off the field that fuels their on-field success.

“We have a strong team culture because we are all geared on the mindset of winning an Ivy championship, and that translates into our lives on this side of the river and across the river,” Bradley said. “We work really hard in school to stay on top of our work. We study in solidarity in dining halls or Starbucks or what have you. We will work on a Friday night when most of Harvard’s campus is not working. So we spend a lot of time together outside of softball.”

The senior class has been consistent and hardworking on the diamond and in the classroom. They have all at some point been recognized by the Coaches’ Association for having a GPA over 3.5 during the season.

—Staff writer Ginny Miller can be reached at virginia.miller@thecrimson.com