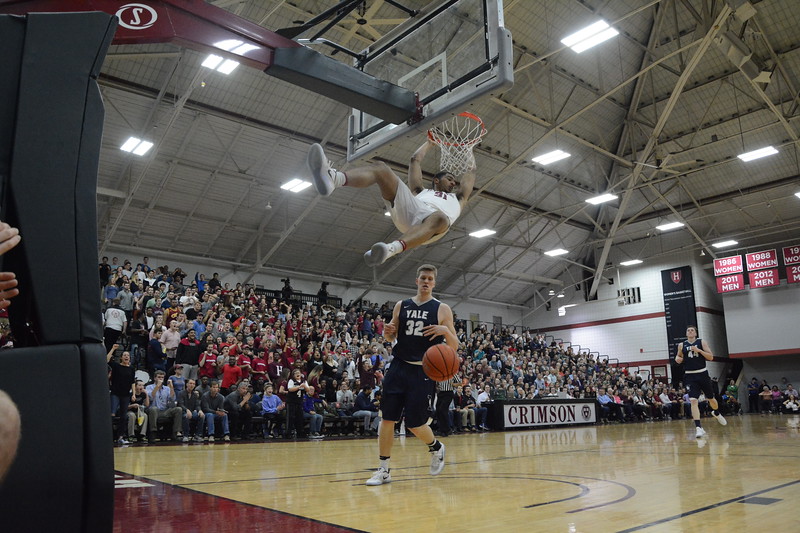 Freshman forward Seth Towns had 18 points Friday night against Yale, including a breakaway dunk off of a Bulldog turnover. By Eunice N. Michieka
By Stephen J. Gleason, Crimson Staff Writer

Freshman forward Seth Towns had 18 points Friday night against Yale, including a breakaway dunk off of a Bulldog turnover. By Eunice N. Michieka

A 15-4 run immediately following halftime propelled the Harvard men’s basketball team to a 77-64 win over Yale on Friday night at Lavietes Pavilion. The victory guaranteed the Crimson a top two seed in next month’s inaugural Ivy League Basketball Tournament. Freshmen Bryce Aiken and Seth Towns and senior center Zena Edosomwan led the Crimson (17-7, 9-2 Ivy League) to a 46-point second half. The season sweep over the Bulldogs (14-10, 6-5) was Harvard’s first since the 2012-2013 campaign.

Trailing by three at intermission, the Crimson got an easy layup for freshman wing Justin Bassey to start the second half and was off and running from there. The team was taking and making open shots to begin the second frame, a major shift from the fashion in which it ended the first half.

Less than two minutes after the break, freshman forward Chris Lewis found a cutting Towns for a layup and the latter picked up a steal on the other end that he slammed home for two. After Towns drained a three, a three-point halftime deficit was now a four-point Harvard advantage entering the second period’s first media timeout. The onslaught continued and the lead grew with the Columbus, Ohio native running the show. The freshman scored or assisted on 11 of the Crimson’s 15 points during the run that would prove to be the difference for Harvard.

The spark from Towns was a much-needed one for the Crimson following the break. Despite a hot start, Harvard entered intermission having coughed up an eight-point lead it held early in the first half. The Crimson went 6:47 without a point in the middle of the first frame.

“I was especially impressed with our initial start,” Harvard coach Tommy Amaker said. “I thought that really gave us some energy and certainly they battled back and were up by a possession at the half. I thought our second half with our poise, at various points to push up and get a lead, made a big difference.”

To make matters worse, the Crimson was getting killed on the glass. Yale outrebounded Harvard 24-11 before the break, including a 7-0 mark in offensive boards. Despite the big discrepancy, Amaker stuck to his guns. With the starting five he has used for the third contest in a row—Aiken, Bassey, Towns, Lewis, and co-captain Siyani Chambers—on the floor, the Crimson was able to find holes in the Yale defense and hold the Bulldogs to jump shots and one-shot possessions to begin the half. After making 13 of its 29 field goal attempts before the break, the Bullodgs hit just 10 of their final 28. Harvard meanwhile made two-thirds of its second half field goals while inducing 17 Yale turnovers on the evening.

If Towns got the second half party going, Aiken closed it out. The Randolph, N.J. native had 14 second half points on 4-of-7 shooting, including a highlight reel crossover that led to a wide-open three and brought the sellout crowd to its feet. The freshman did the same thing less than four minutes later to push the lead to 15.

“I think I was just thinking too much [in the first half],” Aiken said. “I was just second-guessing what I was doing, when to pass, when to shoot. When we came out for the second half, I just trusted my instincts and went with it.”

For the second time this season, sophomore guard Alex Copeland was the catalyst for the Bulldogs. Coming off the bench for Yale coach James Jones, the Los Angeles native teamed up with senior forward Sam Downey for 20 of the Bulldogs’ 34 points. The duo shot 8-of-14 from the field while the rest of the team was 5-of-15. As the Crimson forced Yale into more jump shots, Downey became less of a factor and Copeland was the only reliable scoring option for Yale. No other Bulldog scored in double figures after the break and the team’s inability to consistently make jump shots doomed it on the offensive end. In his two contests against Harvard this season, Copeland has scored 20 points in each game.

“He can create a lot,” Amaker said. “He’s very crafty and dynamic with the ball and his shotmaking ability changes it because of his size. He’s a hard guard in terms of how you rush out on him with his ball skills and craftiness to get by and make a play. He can be a dynamic offensive player and certainly we’ve seen that throughout his first year.”

For the third game in a row, the Crimson came out of the gate strong. Harvard hit four of its first five shots to begin the game. All but two of the Crimson’s field goals attempts before the game’s first media timeout were layups but Harvard stopped attacking the rim as the half progressed.

After drawing four Yale fouls in the game’s first four-plus minutes, the Crimson did not get to the line in the first half’s final 15:53 as the Bulldogs committed only one foul in that span. Despite the long stretch without a field goal—something that has become a Harvard tradition this season—the Crimson was able to stay in the game due to sloppy play by Yale. The Bulldogs turned the ball over ten times in the first half and its largest lead of the evening was only six.

Despite only having six players score and having its two bigs in foul trouble during the second half, Harvard was able to keep Yale at arm’s length after cutting the deficit to single digits with 2:10 to play.