Harvard's Seniors Bid Farewell to Lavietes with a Win 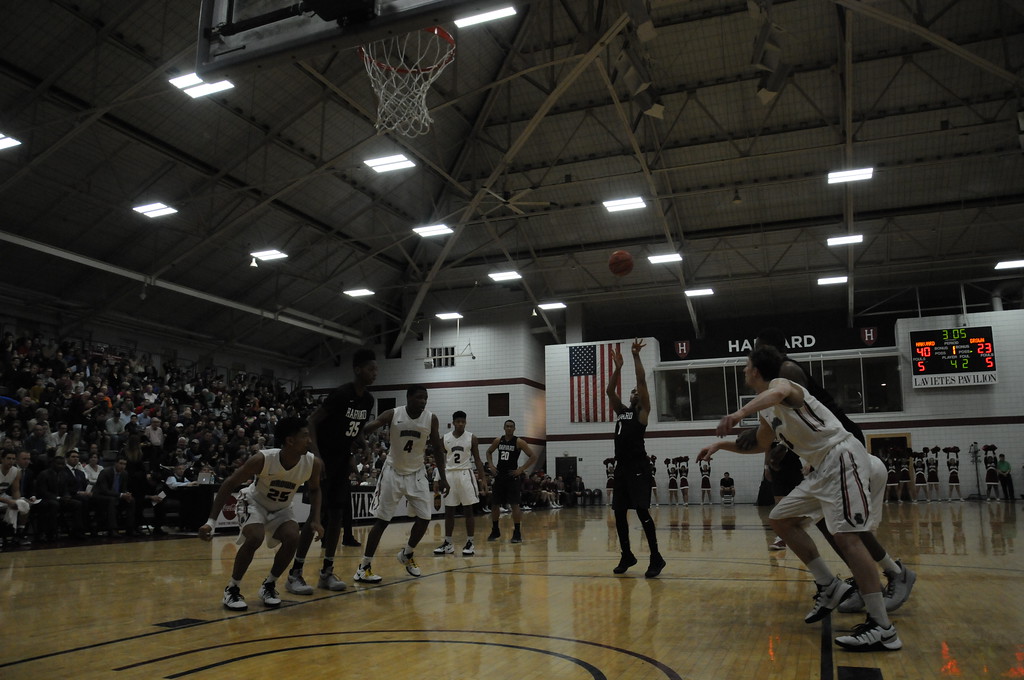 Senior co-captain Siyani Chambers went on an offensive scoring spree, notching 10 points over the course of three minutes at the end of the first half. By Krystal K. Phu
By Theresa C. Hebert, Crimson Staff Writer

The Harvard men’s basketball seniors ended their careers at Lavietes Pavilion in style Saturday night as the Crimson (18-7, 10-2 Ivy League) earned its most dominant conference win against Brown (12-16, 3-9), 77-58.

Harvard honored its senior class in a pre-game ceremony as this was the team’s final regular season game at Lavietes Pavilion. The four veterans—co-captains Siyani Chambers and Corbin Miller, along with forward Zena Edosomwan and guard Matt Fraschilla—took the floor at tip-off and gave Harvard a lead it would never relinquish.

While Harvard coach Tommy Amaker inserted all four into the starting lineup—whereas typically Chambers is the only senior who starts—the group made significant contributions in the early minutes, setting the tone for the beat down that ensued. Before substituting the class of 2017 for the typical core rotation, the starting five got the home team off to an 11-2 start, with three of the four seniors recording a bucket.

“I was really excited to see that happen, but I thought they did it within the flow,” Amaker said. “[L]ike Siyani didn’t look to try and get any shots he was just playing the right way, finding the open guy, setting other guys up. All of them just took the shots that were there.”

Many of the shots that were there belonged to Edosomwan, as his teammates found him for easy buckets in the paint. After Miller hit an opening jumper to put the Crimson up 2-0, Edosomwan tripled Harvard’s total with a pair of dunks assisted by Chambers and Fraschilla. Edosomwan finished the night just shy of a double-double, notching eight points and 11 rebounds. 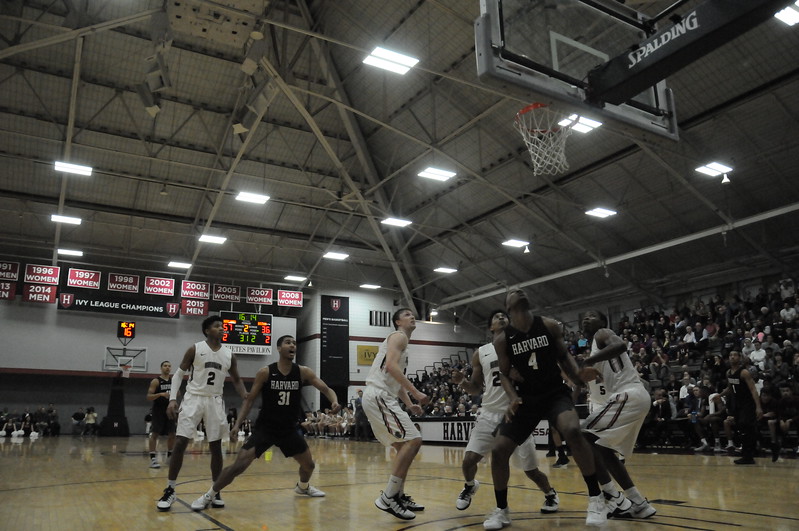 Senior forward Zena Edosomwan had a game-high 11 rebounds, more than Brown had in the entire first half. By Krystal K. Phu

While Chambers was the last of the four to get a bucket, he would leave Lavietes the loudest. The co-captain finished with a season-high and game-high 19 points off of seven-for-nine shooting from the floor. Late in the first half, Chambers put the offense on his back as he scored 10 of the team’s 12 points over a three-minute spurt. The one bucket he didn’t score—an Edosomwan dunk—he assisted.

Chambers had the best statistical night of the bunch, but Fraschilla elicited the loudest cheer from the crowd and his team’s bench as he hit a corner three in front of the Brown bench early in the first half. The senior had not played any meaningful minutes in Ivy play during his career, with his junior season cut short by an ACL injury. 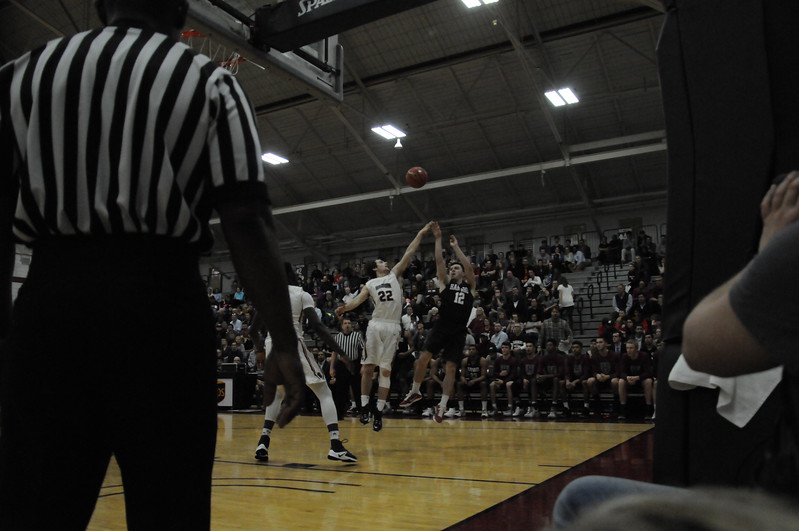 Senior Matt Fraschilla has seen limited minutes this season, but received a roar from the crowd after hitting an early three. By Krystal K. Phu

Fraschilla has plans to remain on the bench of a basketball team in the future, but as a coach rather than a player. During the pre-game ceremony, he was described as “an extension of the coaching staff”. With his experience, he was able to jump right into the offense seeing just six total minutes of play this season before Saturday night.

“[It helped] having four seniors out there that have been in the system for four years, five years for Siyani, six years for Corbin, that know what coach wants as far as the offensive end goes, know what kind of shots were looking for,” Fraschilla said. “I think that’s what you saw out there, lots of good ball movement, no rushed shots, guys were looking for each other and I think that’s why we got off to a good start.” 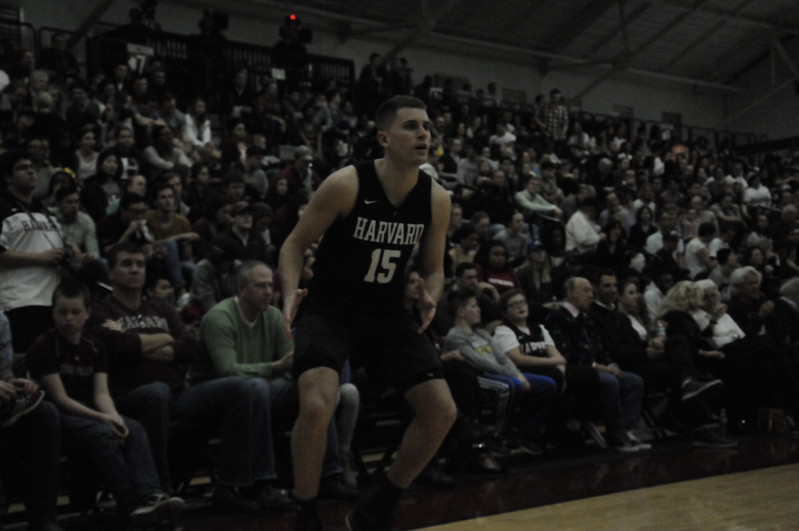 Senior Corbin Miller got the scoring started as he hit the opening bucket—a long two just inside the three-point line. By Krystal K. Phu

To call this group veterans would be somewhat of an understatement as only Edosomwan and Fraschilla joined the team initially as members of the class of 2017. Chambers was originally a member of the class of 2016, but was forced to withdraw from the university last season after suffering an ACL injury during a summer workout. Miller enrolled with the class of 2015, but took two years off from basketball to complete an LDS mission in Mexico.

Though their families littered the stands and the student section cheered loudest at their successes, the four seniors wouldn’t dwell long on the nostalgia and emotions of playing their final game at Lavietes Pavilion as the team still has at least three more games to play (next weekend at Penn and Princeton, followed by the Ivy Tournament).

“It was a great team win,” Chambers said. “We’ve been here a long time, we’ve seen a lot of things, done a lot of things, and to be able to spend that time on the floor together it was great. But that wouldn’t have meant anything to us if we didn’t do what we were supposed to do so I think it means a lot more to us that we were able to play how we played no matter who was on the floor and that we were able to come out with a victory against a tough team.”

—Staff writer Theresa C. Hebert can be reached at theresa.hebert@thecrimson.com