Men's Basketball Pulls Away from Penn 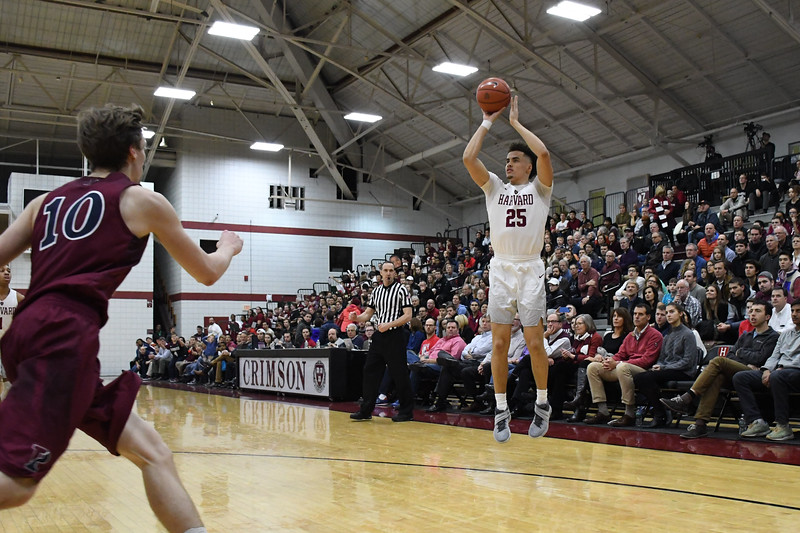 A Corey Johnson three with just over two minutes to play capped off a 13-2 Crimson run and proved to be the final nail in Penn’s coffin as the Harvard men’s basketball team pulled out a 69-59 win on Friday night at Lavietes Pavilion. The run gave the Crimson an eight-point edge that the Quakers would not cut to fewer than six down the final stretch. The 10-point margin of victory was the largest lead of the night for Harvard (12-6, 4-1 Ivy League) in a contest that was within three points either way for most of the second frame.

“Basically we talked before the game and talked about delivering the first punch, but Penn did a great job of making tough shots,” Johnson said. “We never felt worried, we knew we had the potential to come back, it was just a matter of digging down and just doing it.”

Much like Dartmouth did two weekends ago, Penn (7-10, 0-4) hit a three to beat the buzzer before intermission and give the guests a lead going into halftime. The Crimson was trailing at halftime for the fourth consecutive game but the three-point deficit paled in comparison to the 15-point one that the Quakers held less than eight minutes into the contest. As the shots started falling for Harvard after a cold start to the evening, the defense continued to hold serve.

“Things picked up a little bit once we saw the ball go in the basket a few times,” Harvard coach Tommy Amaker said. “We put ourselves back into it, or least we felt like we were settled having made a few baskets. I just thought that that was the key there. And our defense. That has been our calling card since we’ve been here in this program.”

The comeback run wasn’t particularly pretty from a shooting point of view. It lasted more than five minutes and was highlighted by an and-one by co-captain Siyani Chambers and offensive rebounds from senior center Zena Edosomwan, with Johnson’s two threes as the only converted jumpers.

However, the defense during the stretch was a chapter pulled straight from the Tommy Amaker How-To Guide. The Crimson held Penn to two points on 0-for-4 shooting over a nearly six-minute stretch in which Harvard forced four turnovers. On the evening, the hosts had 11 steals, with Chambers leading the way with four. It was the second game in a row that the Crimson held an opponent to fewer than 25 points in the second half.

Unfortunately for Harvard, the game was no cakewalk. Despite outscoring the Quakers 65-40 over the game’s final 32:10, a horrid start on both ends of the floor kept the game interesting. Penn did not resemble a winless Ivy League team when it came out of the gates, making seven of its first eight shots and consistently beating Harvard off the dribble.

From the jump, the Crimson looked more like the team that was trailing Columbia by 15 at halftime last Saturday than the one that cut that lead to two and held the Lions to 28.6 percent shooting in the second half. To make matters worse, the woes that plagued Harvard point guards Chambers and freshman Bryce Aiken six days earlier continued against Penn. After missing its first four shots, the duo have converted just two of its last 24 field goal attempts over the last two games.

However, the Quakers would cool off, ensuring that Harvard would not need another frantic second half comeback.

“I guess we’d like to overcome it in the first half so in the second half it’s a closer game but it’s really just about not letting it happen,” Johnson said. “We really just have to lock in. The past couple of games the starts of our games haven’t been the best, especially on the defensive end so we have to clean that up. But we did a great job of honing in on things we need to to get back in the game.”

The chipping away began with an Edosomwan free throw, a fitting way to start on a night in which the senior did a little bit of everything for the Crimson. In 20 minutes of action, Edosomwan had seven points on 3-of-5 shooting, grabbed 11 rebounds, and had five blocks.

Perhaps more importantly was what didn’t show up on the statline—his composure and his defense. With the result still in question with just over nine minutes to play, Aiken began to show his frustration after he was called for an offensive foul. Edosomwan grabbed his teammate, visibly calming the first-year down.

“The veterans and the seniors—that’s why our program has been good and successful,” Amaker said. “When you have players within the program that can see things and correct things, then you know it’s not always on the coaches to do those things.”

Just a minute and a half later, Harvard began its run with Edosomwan holding down the paint. The Los Angeles native teamed up with freshmen Chris Lewis and Robert Baker to shut down Penn freshman A.J. Brodeur, holding the forward to seven points on 3-of-10 shooting on a night when he turned the ball over six times.

Brodeur was not the only Penn player the Crimson put in tough spots on offense. After making seven of its first eight field goals, the Quakers missed 35 of their final 49.

Harvard for its part took 30 three pointers and only 33 twos. For the second game in a row, the long balls were not falling for Harvard players not named Corey Johnson. While Johnson has made 11 over the last two games, the rest of the team is 8-for-46 from long range.