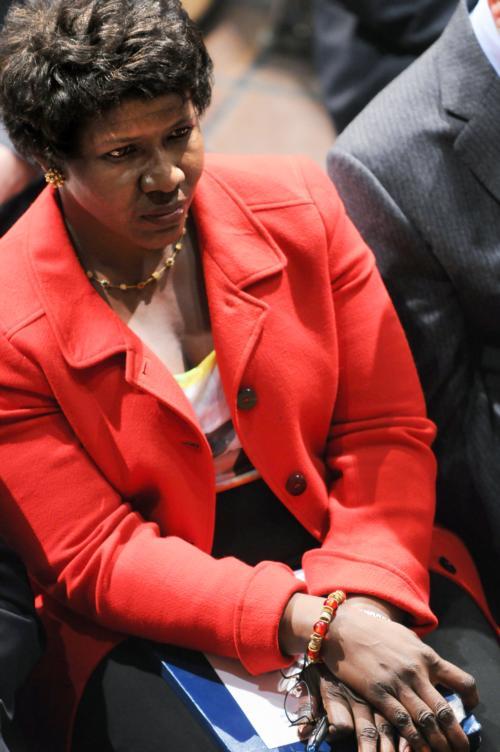 Journalists Judy Woodruff and the late Gwen L. Ifill will receive the Radcliffe Medal in May in recognition of their work on the PBS program “NewsHour.”

Michele L. Norris, a radio journalist and one of Ifill’s close friends, will receive the medal on Ifill’s behalf. A groundbreaking political reporter and newscaster, Ifill died Nov. 2016 at 61.

The late journalist Gwen L. Ifill, pictured at Harvard in 2009.

With this year's awards, Cohen said the Radcliffe Institute wanted to draw attention to the “importance more now than ever of integrity in journalism.”

“These are two journalists that we have major respect for and think have made major contributions,” she said.

Woodruff and Ifill will receive the award May 26 at the Institute’s annual Radcliffe Day celebration. “We’ve had a tradition of using the occasion to bring attention to the contributions of a woman and we build the day around the contributions of that person,” Cohen said.

On the morning of Radcliffe Day, journalists will participate in a panel called “(Un)Truths and Their Consequences,” moderated by Ann Marie Lipinski, the curator of the Nieman Foundation for Journalism at Harvard. The panelists will be government professor Danielle S. Allen; A’Lelia P. Bundles ’74, a former television producer and executive; E.J. Dionne ’73, a columnist for the Washington Post; and Peggy E. Noonan, a columnist for the Wall Street Journal.

During a luncheon after the ceremony, Woodruff will discuss her career in journalism with David Brooks, a columnist for the New York Times, and Walter Isaacson ’74, an author and president and CEO of the Aspen Institute.

Cohen said she wanted to invite speakers with different political views for the panel.

“We really think that the issue of integrity and truth in journalism is one that really transcends partisanship and we wanted to have people who were bringing different political perspectives and who shared concerns over the consequences of untruth,” she said.

Cohen said she hopes Radcliffe Day will not only honor the recipients of the medal but will also prompt attendees to think about integrity in journalism. “We started planning this before attacks on the media and fake news became hot topics,” Cohen said. “Our Radcliffe Day topic has only become more important.”