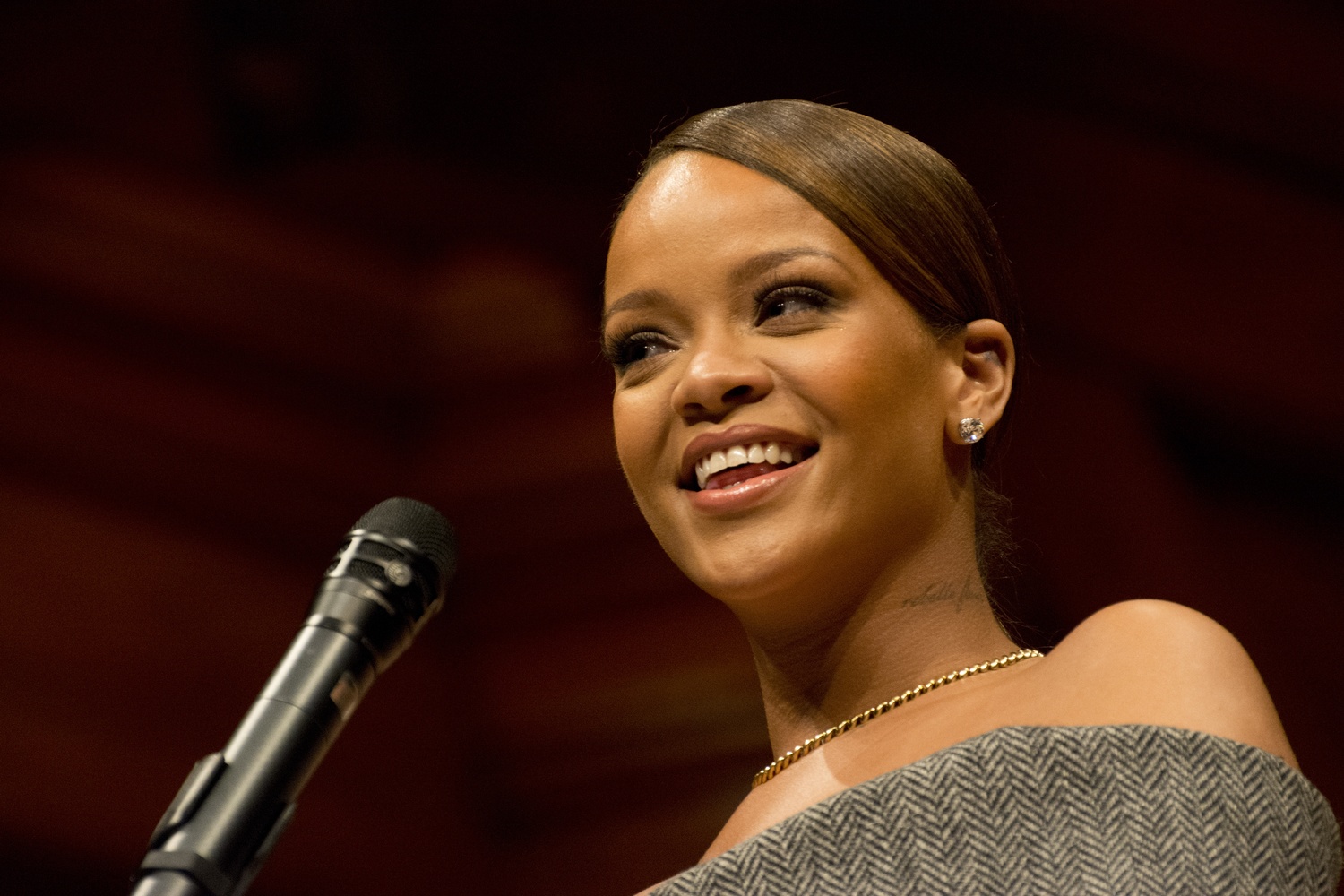 To a chorus of cheers, screams, and a standing ovation from students, international pop star Rihanna accepted the Harvard Foundation’s 2017 Humanitarian of the Year Award in a packed Sanders Theatre.

Though Rihanna, who originally hails from Barbados, is best known for her eight Grammy awards and perennial presence near the top of the charts, it was her philanthropic and humanitarian work that won recognition from the Foundation.

“I think we were really struck by Rihanna’s contributions to education and health care in the Caribbean, particularly her home country of Barbados,” said Avni Nahar ’17, an intern at the Foundation. "The way that she has really used her platform to advocate for change and for resources for people who need them.”

Rihanna began her humanitarian work when, as an 18-year-old, she founded the Believe Foundation to support terminally ill children. Today, one of Rihanna’s best-known humanitarian ventures is the Clara Lionel Foundation, named for her late grandmother. The foundation supports educational and health-orientated causes, like donating money towards global scholarships and funding a state-of-the-art oncology center at a hospital in Barbados.

Rihanna has also formed a partnership between Global Partnership for Education and Global Citizen and served as an ambassador for UNICEF’s Tap Project.

The award ceremony included a performance by the Kuumba Singers, a welcome from Dean of the College Rakesh Khurana, student tributes to Rihanna’s humanitarian work, and an address by Rihanna herself.

“Before I start with the mission of the College, I just have to say, ‘woah’,” a starstruck Khurana said before beginning his remarks.

The guest of honor was also in high spirits.

“I made it to Harvard,” Rihanna said. “I never thought I would be saying that but it feels pretty good.”

In her address accepting the award, Rihanna challenged audience members to make a commitment to helping “at least one person.”

“In this room, I see optimism, I see hope, I see the future” she said. “All you need to do is help one person and expect nothing in return. To me that is humanitarianism.”

Rihanna’s appearance on campus was met with enthusiasm from students. Students began lining up in front of Memorial Hall at 10 a.m. to secure tickets for the event that were released at noon.

“She’s been able to stay on top of the music industry for so many years, so I really admire that” said Shannon S. Lytle ’17.

The Harvard Humanitarian Award is given each year in the name of Reverend Peter J. Gomes as a way to honor exceptional efforts in humanitarian works. Past recipients have included gender rights activist Malala Yousafzai, singer Lionel Richie, and Delores Huerta, a farmworker rights activist.

Later this week, the Harvard Foundation will honor Academy Award-winning actress Viola Davis as the Foundation’s Artist of the Year at their Cultural Rhythms festival.