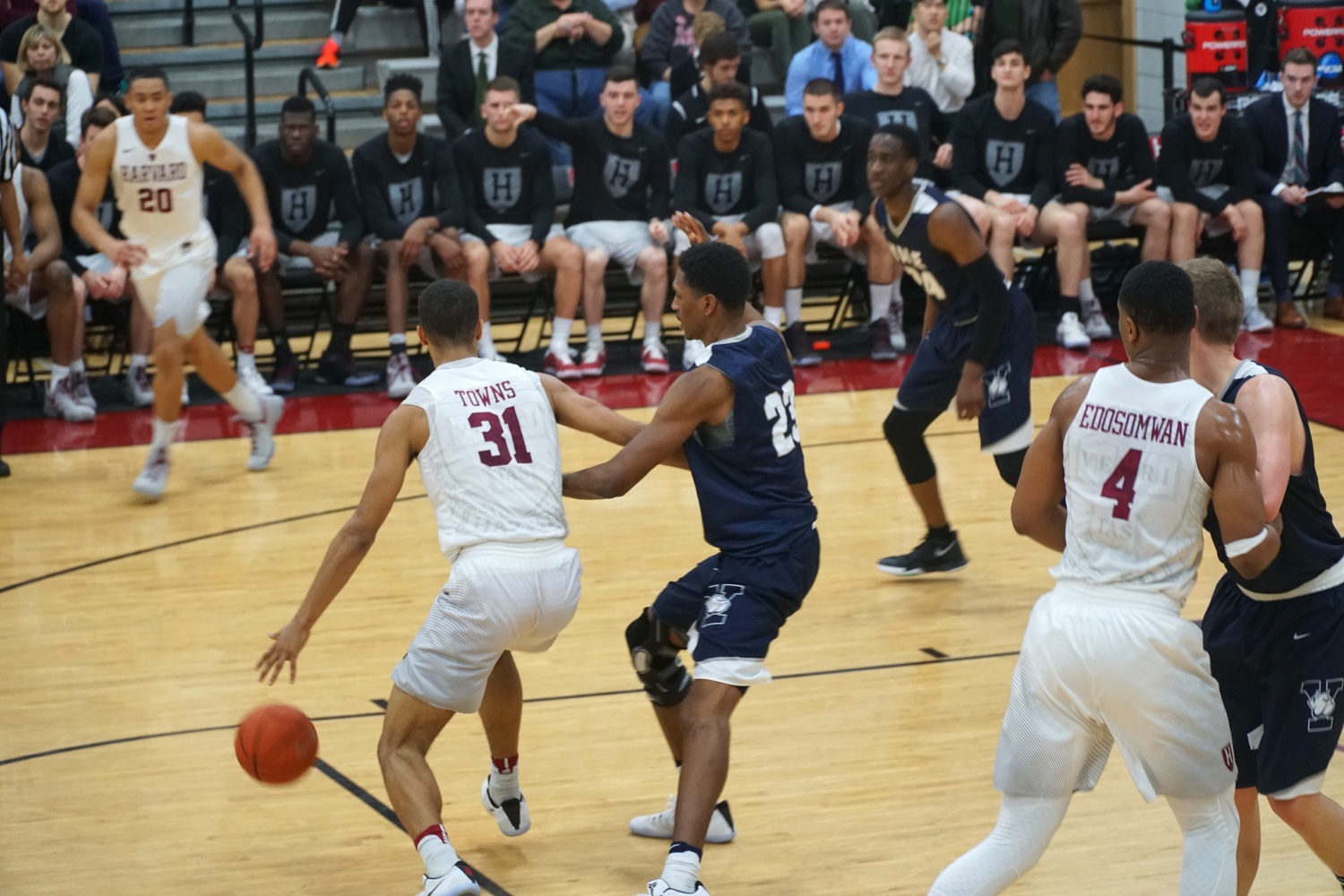 After losing a heartbreaker to Tigers at home the last time around, the Crimson is looking to avenge the loss Friday night on the road. A sweep of the weekend would keep Harvard’s hopes of a first place finish in conference alive, while Penn takes on the Crimson looking to keep its season alive. By Ryosuke Takashima
By Theresa C. Hebert, Crimson Staff Writer

The Harvard men’s basketball team is undefeated in its last six contests, but the sting of the one loss in the past month hasn’t gone away.

Before the Crimson (18-7, 10-2 Ivy League) strung together six wins to guarantee at least a No. 2 seed in the inaugural Ivy League tournament, it lost a heartbreaker to Princeton (19-6, 12-0) at home, 57-56. It wasn’t just the close score that made the loss tough to swallow, but the fashion in which it happened.

With Harvard in the driver’s seat, only one of a pair of free throws, a non-foul, a box out, or a three-pointer needed to go the Crimson’s way to hand Princeton its first Ancient Eight loss. Instead, Harvard failed to execute and senior Steven Cook put the nail in the coffin as he scored the winning basket off a missed Tigers free throw with just seconds left on the clock.

This weekend, Harvard will get a chance to avenge its last second loss and potentially hand Princeton its first conference loss of the season when they meet on Friday night in New Jersey. Next, the Crimson will head to Philadelphia where it faces Penn (12-13, 5-7) on Saturday.

“We’ve moved past [the Princeton loss] but I’m not sure that it’s gone away,” Harvard coach Tommy Amaker said. “Princeton’s very good and obviously has had a tremendous season. That was one game, I’m sure they felt the same way we felt, we didn’t close and they took advantage of it.”

Since the loss to the Tigers, though, the Crimson has improved its ability to close out games, winning its last six games by a margin of just under 11 points per game. The stretch included two victories over Ivy rival Yale, a win over Columbia (who bested Harvard in January), and a 19-point rout of Brown.

The winning ways have come largely as a result of more consistent play from Harvard’s freshmen on both ends of the floor. On offense, freshman guard Bryce Aiken—the Crimson’s leading scorer—is averaging 18 points per game since the Princeton loss. Classmate Seth Towns is netting an average of 16.5 per contest. While the pair has been tasked with bearing more of the scoring burden as sophomore guard Corey Johnson has battled illness, the pair has also improved their offensive efficiency and playmaking.

While Aiken and Towns have without a doubt performed well in Johnson’s absence, Amaker is looking forward to hopefully getting his sharpshooter back to full strength this weekend. Johnson is currently shooting at a 43 percent clip from behind the arc, good for fourth in the Ivy League

“He’s such a weapon and a threat because of his three-point [ability],” Amaker said. “He’s shooting as high a percentage as anyone from the three-point line and he can shoot it from really deep. He stretches the floor for us, meaning that someone really has to be on him on the offensive end, you can’t sag off, you can’t lose him.”

“They try to force you when they’re doing silly stuff on the offensive side,” Towns side. “They don’t really foul too much, they’re not going to bail you out and that’s something we’ve definitely gone over.”

With the stingy Tiger defense, Amaker is also wary of Princeton’s ability to score in transition off of turnovers, something that plagued his team the first time these two faced off.

“Transition is the best time to get threes because it’s a broken floor, you’re not back and set, things get a little chaotic if you don’t communicate,” Amaker said. And if you don’t have a sense of urgency to get back and find people, they hit open threes.”

After facing the current top seed on Friday night, Harvard turns around just 24 hours later to face Penn, who has been a different team since the Crimson last saw them. After starting league play 0-6, the Quakers have put themselves back in postseason contention by rattling off five straight victories before falling to Columbia last Saturday.

With the possibility that Penn’s postseason hopes could come down to the result on Saturday, the Crimson can expect the Quakers to come out swinging.

“They have elevated their confidence by winning some tough, tight games,” Amaker said. “We’ve done the same thing. The belief is there, you can see it and i think that’s something that’s happened for Penn and it’s served them really well.”

Staff writer Theresa Hebert can be reached at theresa.hebert@thecrimson.com.