Harvard Lacrosse Gusted Away by Minutewomen 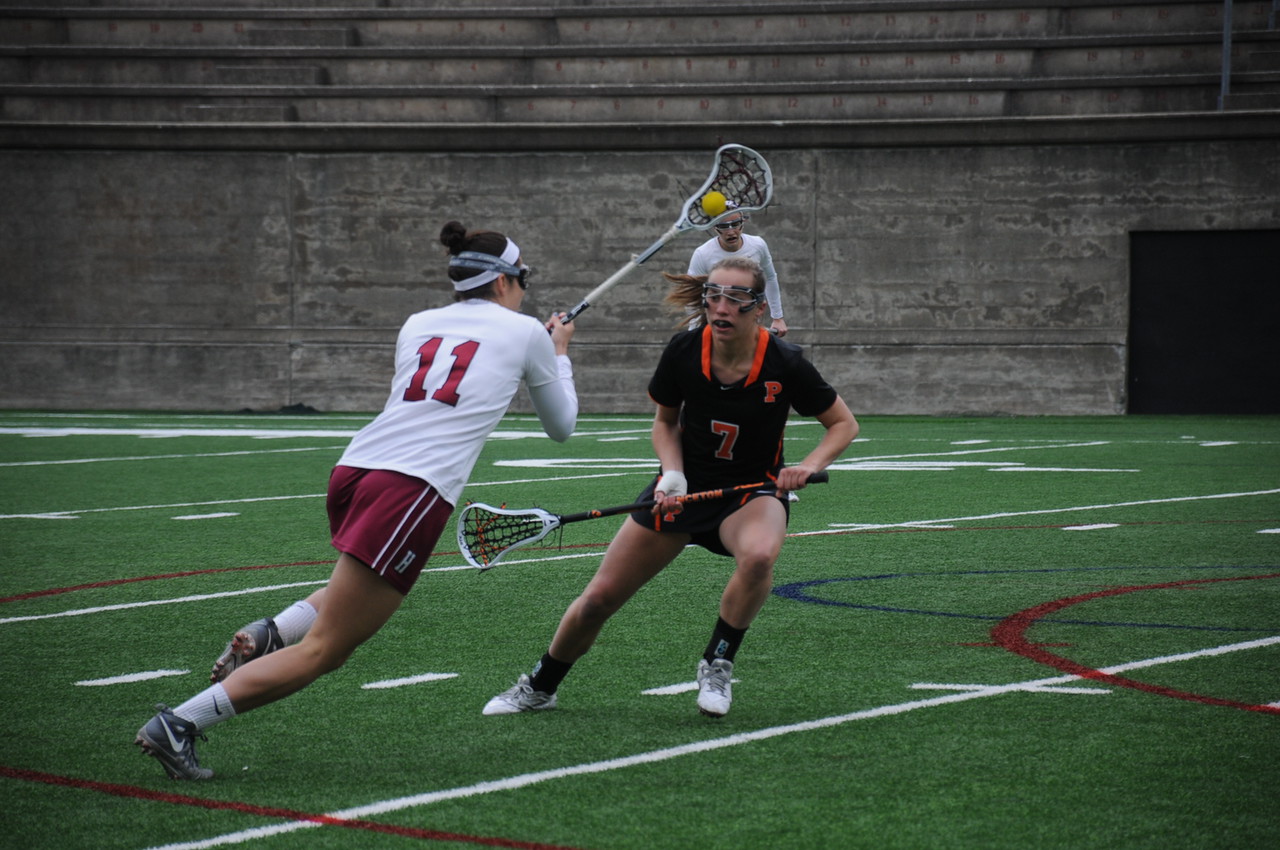 Senior defender Robyn White drives against a Princeton defender last season in a losing effort. The Crimson came up with a simlar result Wednesday night at Harvard Stadium against Massachusetts, which was the team’s second loss in a row after going on a three-game winning streak. By Hayoung Hwang
By Leena Ambady, Contributing Writer

­On a frigid night at Harvard Stadium, the Harvard women’s lacrosse team (4-3, 1-0 Ivy League) dropped its first home game of the season, falling 16-9 to cross-state opponent UMass Amherst (4-3). The loss was the second in a row for the Crimson, following Saturday’s overtime defeat by Syracuse.

Harvard got on the scoreboard first with a goal by senior attacker Marisa Romeo just 2 minutes into regulation. However, the Crimson’s only lead of the game lasted just under a minute, as UMass senior midfielder Sarah Crowley converted a free position shot on the next possession, followed by three Minutewomen goals to make it 4-1.

Senior midfielder Hannah Murphy led UMass by scored a hat trick and securing 17 draws for her team, despite facing off against Harvard’s senior tri-captain Maeve McMahon, whose 37 draw controls put her at second in the Ivy League.

“[Murphy] is a good player,” Romeo said. “We see a lot of players like her throughout the Ivy League, so it was good practice getting to play her in a non-conference game.”

McMahon did get payback, as she converted a career-high four goals on the night. She began by cutting the lead back to two goals with a curling shot that sent her diving to the ground. However, the Minutewomen answered with three quick goals to extend their lead to 7-2, two of the scores coming on passes from behind the cage to unmarked players in front of goal.

Undeterred, McMahon found the back of the net for the second time after executing a smooth dip move to evade a defender with 12:23 left in the first half. Sophomore midfielder Keeley MacAfee followed this with a low free position shot to the corner of the goal to cut the lead to 7-4.

But any offensive momentum built by the Crimson was stifled by a strong UMass defense who forced Harvard, a team that averages just 11.2 turnovers a game, to give the ball up 18 times.

The Crimson also struggled with organizing its offensive attack. Harvard only turned the ball over one more time than the Minutewomen, but many of its giveaways occurred when the UMass defense forced the home team to rush passes around the net and squander scoring chances.

Mistakes continued as the first yellow card of the game came with 8:50 left on the clock as McMahon was penalized for a dangerous shot and sent off the field for two minutes. The Minutewomen were able to capitalize on her absence, scoring three goals in the next three minutes from Murphy and junior attackers Holly Turner and Hannah Burnett. But three minutes later it was Murphy who was called for a foul, giving the Crimson a one-woman advantage that it exploited with a free position goal by Romeo before heading into the locker room down 10-5.

Harvard continued to struggle offensively in the second half, unable to score a goal for the first 20 minutes of the period. This scoring drought was largely due to UMass senior defender Allison Ryan, who tightly shadowed the Crimson’s leading scorer throughout the game, holding her to just two goals and ending Romeo’s four-game streak of hat tricks.

Despite the strong winds and temperatures in the low 20s, UMass came out of half time red-hot, with goals by 6’3’’ sophomore midfielder Kiley Anderson and Burnett, followed by a quick outside whip shot from Turner four minutes later. The Minutewomen then went up 14-5, their biggest lead of the game, with 10:58 to go after a second goal by Anderson.

The Crimson mounted one last offensive comeback with a three-goal run late in the second half, kicked off by a goal from restart by MacAfee and continued when senior tri-captain Megan Hennessey found the back of the net from a seemingly impossible angle. McMahon then cut it 14-8 by completing her hat trick a minute later.

This run was not enough to catch the Minutewomen. After two more UMass goals and another score by McMahon, her fourth of the game, UMass handed the Crimson its first regulation loss of the season, 16-9. The Crimson was held to just 9 goals, its lowest tally in a season where it has averaged an impressive 15.5 goals per game.

“We didn’t really play as well as we’d like to,” McMahon said. “UMass threw a lot of things at us that they haven’t done before and so it was kind of hard for us to adjust to it.”