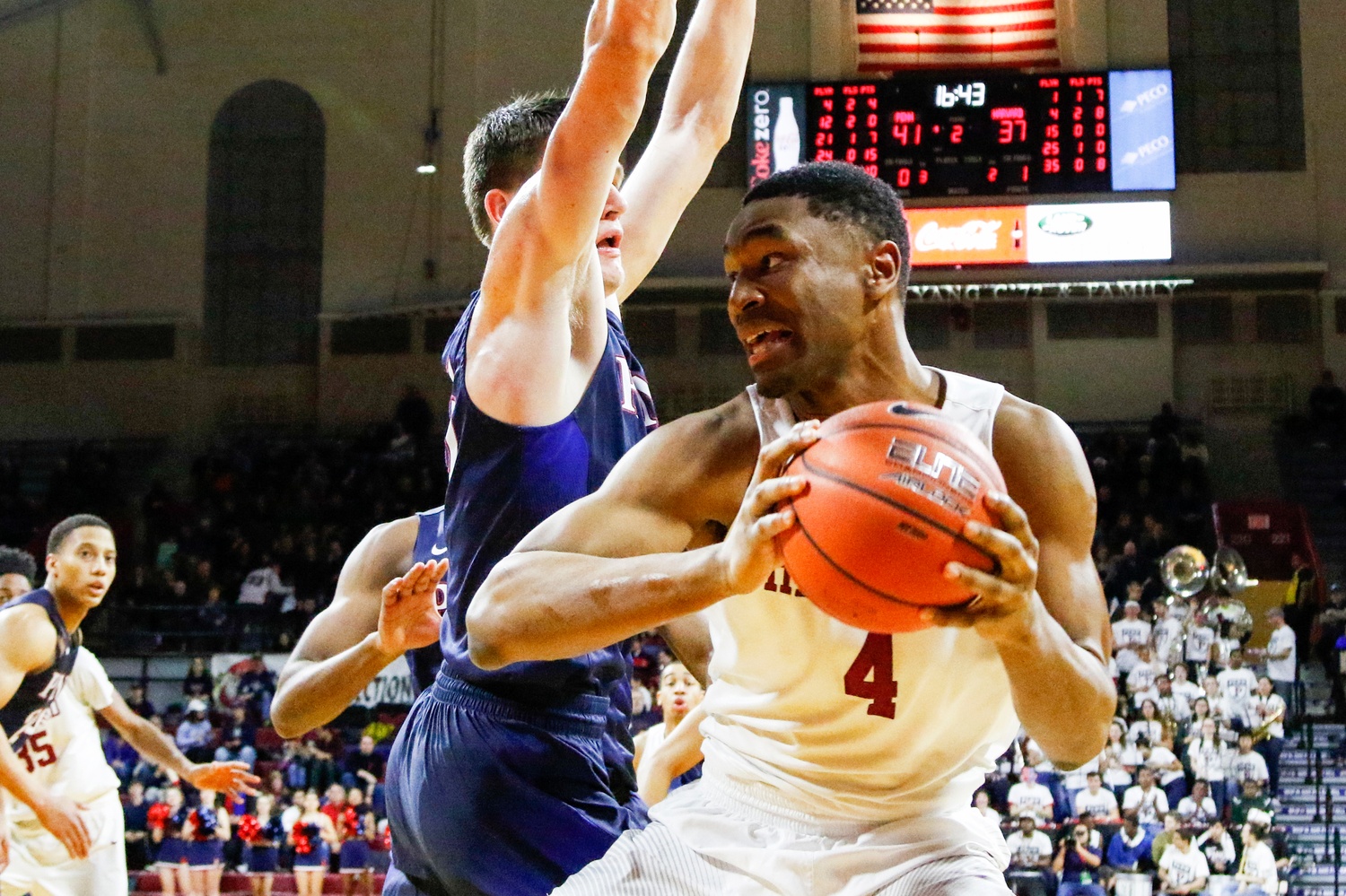 Senior Zena Endosomwan is one of three Crimson players to have seen game action in the 2015 playoff at the Palestra. Harvard must oust Yale in the first round of the Ivy League Tournament this year for a chance to earn the NCAA bid. By Timothy R. O'Meara
By Theresa C. Hebert, Crimson Staff Writer

Coach Tommy Amaker has been there before —playing a do-or-die game against the Bulldogs in a playoff scenario. Though this year represents the inaugural Ivy League Tournament, the Crimson’s first round matchup mimics a 2015 playoff scenario where Harvard and the Elis played a one-game playoff in order to determine who would take the league’s automatic bid to the NCAA Tournament.

This time around, the scenarios are a little bit different. With Harvard finishing as the second seed in the conference regular season standings and Yale following behind in third, the teams will face off to determine who will play the winner of Princeton (#1 seed) and Penn (#4 seed) in the Ivy Tournament championship and send one team to The Big Dance.

“I’ve been fortunate enough and lucky to experience it through the years in many different ways as a player and as a coach,” Amaker said. “I’m happy for our team and our program to get an opportunity to represent Harvard on the men’s side and see that we can do the best we can, to see if we can play well and win the inaugural tournament would be a really cool thing.”

The Ivy League Tournament is coming at the perfect time for Harvard, as it would have been eliminated from postseason contention by this point in the league’s old format. Though Harvard has benefitted significantly in recent history from the 14 game tournament of the past, the new tournament format gives the team a chance to unseat Princeton, who went undefeated during the conference regular season.

“I guess I am happy that the tournament is in place now because we didn’t really finish out the regular season how we had hoped for,” Chambers said. “[W]e didn’t have the outcome that we wanted in the regular season but we’re attacking this weekend like any other Ivy weekend and that starts with our preparation, we had a good practice yesterday and hopefully we can continue that today.

Despite Amaker and the experience of the senior class in tournament games, postseason college basketball is new territory for most of Harvard’s roster. Only co-captains Siyani Chambers and Corbin Miller and fellow senior Zena Edosomwan saw game action in the 2015 playoff at the Palestra, while senior Matt Fraschilla and juniors Chris Egi, Andre Chatfield, and Zach Yoshor were also present but did not play.

Though they are the least experienced in Ivy basketball, the Crimson will need to rely on the firepower of its freshman class in order to make it through Saturday. Newly minted Ivy League Rookie of the Year Bryce Aiken and classmate Seth Towns are Harvard’s two leading scorers, but more importantly they have had some of their best performances in big game scenarios.

Aiken, specifically, has been a key part of both of Harvard’s wins this season, scoring 27 points on the road against the Elis, then responding with 22 more when Yale traveled to Lavietes Pavilion on Feb. 24.

“We’ve needed everything he’s done when we’ve played Yale,” Amaker said. “He’s been a terrific player for us all season and sometimes you can’t expect him to do heroic things all the time and I think at various times he’s been that spectacular for us. But, he’s had a terrific first year and we’re hopeful that he can extend that through this weekend.”

In Yale, Harvard has a familiar opponent. The Crimson swept the Bulldogs 75-67 and 77-64 in two February contests, but Amaker isn’t taking his opponent lightly.

“They’re a very good basketball team and certainly we’ve seen some really good games with Harvard and Yale through the years,” Amaker said. “this year as well has lived up to the billing for both games.”

Amaker noted in a press conference Wednesday that one of the things that makes playoff tournaments exciting is the tendency to provide nail biters and games decided by a single basket. The Crimson has become intimately familiar with the phenomenon of the buzzer beater this season, losing its four Ivy League games by a combined 11 points, with the widest margin coming last weekend against Princeton where Harvard lost by four points.

“Those have been heartbreaking losses,” Chambers said. “Like you said they came down to the last plays and I think, we practice those situations daily. I think when it comes down to that we just really need to focus. Focus on who we are, communication is key, and trusting each other on defense and getting the defensive rebound. We practice that every day and we just have to do it now.”

Yale is coming in hot, sweeping its final weekend of games against Cornell and Columbia in order to clinch the third position in the tournament. The Elis showed they can’t be counted out in any game, overcoming a 14-point deficit to defeat the Lions last Saturday.

Harvard and Yale both have the Ancient Eight’s most recent Ivy bids, with the Crimson last participating in the madness in 2015 and the Elis in 2016. The increased competitiveness amongst the conference teams is one of the motivating factors for shifting to an end-of-season tournament.

“It’s not just exposure for Ivy basketball but all things Ivy,” Amaker said. “We talk about not just what the men and women’s programs are doing but what other sports on our campuses are doing.”

—Staff writer Theresa C. Hebert can be reached at theresa.hebert@thecrimson.com