Schools Will be 'Differentially' Affected by Endowment Returns, Faust Says 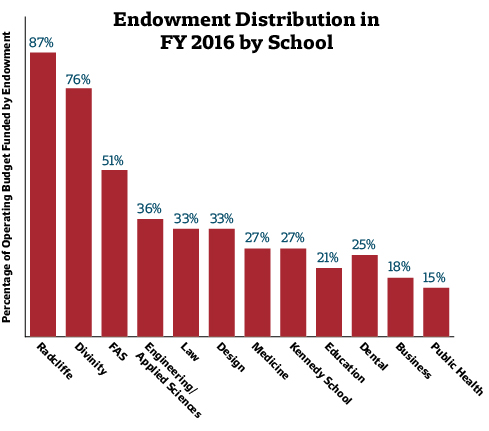 As Harvard seeks to cope with disappointing endowment returns from last fiscal year, some of the University's twelve constituent schools will be harder hit than others, University President Drew G. Faust said in an interview last week.

Harvard posted low returns on its investments in fiscal year 2016, coming in second to the last in the Ivy League with a negative 2 percent return on its investments. Combined with other cash flows at the University, the largest educational endowment in the world took a hit of nearly $2 billion in endowment value.

Since then, some faculty members have said they are worried about the financial future of the Faculty of Arts and Sciences, and the University’s endowment more generally. But those fears—which have manifested in a stunted salary hike for faculty members in fiscal year 2018—may be exacerbated at Harvard’s smaller schools, where money allocated from the endowment makes up a considerable amount of their annual operating budgets.

Faust said each of the schools will be affected “differentially” by the endowment's performance. She.drew a comparison to the financial crisis in 2008 to describe how these schools might be particularly affected.

“For example, right after the financial crisis, the heavily endowment dependent schools like the Divinity School, were really struck because we had an almost 30 percent drop in the size of the endowment and substantial cutbacks because of that,” Faust said. “But the School of Public Health, which gets 70 percent of its money from soft money, outside funding—particularly federal grants—was much less directly affected.”

Spokespeople from both schools declined to comment about ways that the endowment might pressure their budgets, though both indicated that they are eyeing fundraising as a way to offset the losses.

“We will continue to manage finances responsibly and fundraise,” Karla Strobel, a spokesperson for the Radcliffe Institute, wrote in an email.

With the prospect of having to tighten belts at different schools looming in the distance, Faust said that she was not aware of plans to reduce staff at any of the schools.

“We have adjustments in staff sizes, just on a normal basis, but beyond that—by normal basis I mean we start a new event, a new initiative, or an initiative disappears over time or something like that. But I’m not aware of any kind of systematic plans that a school might have,” Faust said.