The Evergreen Dean: Thomas A. Dingman '67 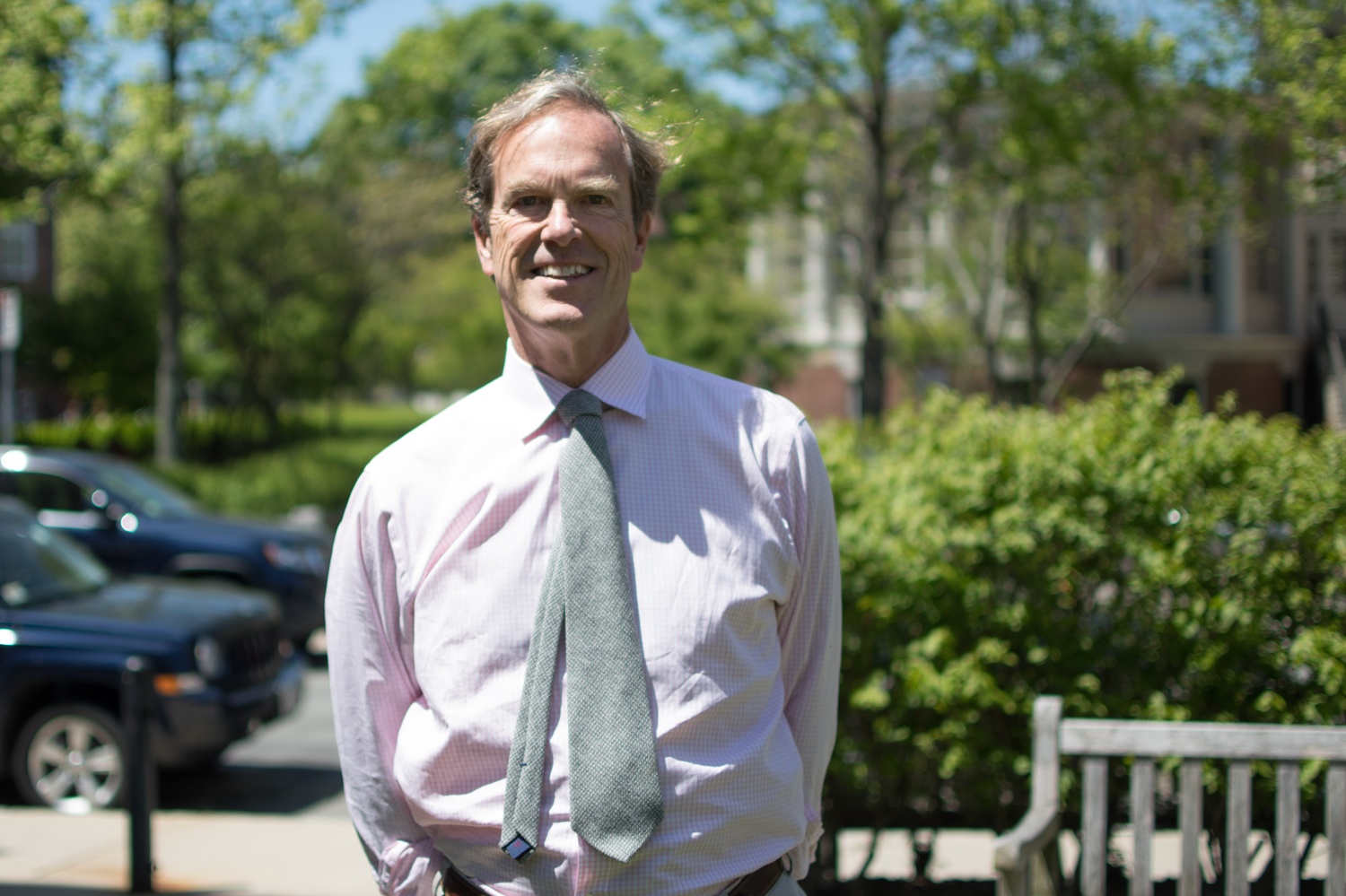 After graduating from the College in 1967, Dingman has spent a total of 44 years at Harvard, pursuing his graduate studies and working in a number of administrative positions. By Megan M. Ross
By Lauren A. Sierra, Crimson Staff Writer

As the 366th Commencement exercises approaches, many seniors at the College are savoring their last few moments as undergraduates at Harvard. But if any of them take a path similar to Dean of Freshmen Thomas A. Dingman ’67 after they graduate, though, it will be as if they never left.

Dingman sits on a cream-colored couch, laid back with his legs crossed and his arms perched across the top of the backrest. He talks in a simultaneously relaxed yet attentive tone, his booming voice echoing across the white walls and bookcases in his office. Dingman is clearly at home in his office in the Freshman Dean’s Office.

After graduating from the College in 1967, Dingman has spent a total of 44 years at Harvard, pursuing his graduate studies and working in a number of administrative positions. Over time, Dingman has carved out a clear niche for himself. Even as he says he’s learned Harvard, he’s shaped it himself—campus would be a very different place without him patrolling the Yard in his distinctive bright-red jacket.

Dingman came to Harvard from rural Connecticut after being admitted off the waitlist in the summer of 1963 as a member of the Class of 1967.

“I went to a small high school, thirty students in my graduating class, so Harvard was a bit of a culture shock,” said Dingman. “I had to get used to the much larger size, living in the city, and competition that I had never even begun to consider before.”

Dingman was a resident of Grays Hall his freshmen year and a resident of Eliot House as an upperclassman. He recalls playing intramural sports for Eliot and taking history tutorials within the House.

Dingman declared a concentration in History. In his junior year and the summer before his senior year, Dingman worked on writing a senior honors thesis, but eventually decided to drop the thesis. Although he has said that dropping his thesis troubled him at the time, he now sees his unsuccessful thesis as a growing experience.

Despite his academic inclinations, Dingman also took advantage of other athletic and social resources available at Harvard.

As a freshman, Dingman played on the freshman tennis and hockey teams. After he failed a Physics midterm and was told he should devote more time to his coursework, Dingman quit the hockey team.

According to Dingman, the friendships he formed as a freshman played a larger role in setting the tone for the rest of his time as an undergrad than the subsequent three years he spent living in Eliot House.

“I made several friends that continue to be some of my closest friends today, and that all happened within the Yard,” said Dingman. “People talk about the House system as sort of the crown jewel, but what they forget is that we have a four year residential system, and I’ve been determined to make sure that in the first year, there really is a distinctive experience.”

Many of those Dingman met in his freshman year went on to become some of his closest friends. Dudley F. Blodget ’67 and Dingman met on the freshman tennis team in 1963 and Blodget went on to be the best man in Dingman’s wedding. Dingman also officiated Blodget’s wedding.

“He is an amazing guy, eternally young and energetic, he is totally devoted to Harvard and each year’s freshmen class. He will run through walls for Harvard and any of the students for who he is responsible,” Blodget said. “However, it is irritating that he looks ten years younger than all of his ‘67 classmates.”

Dingman said he often wonders what his Harvard experience would be like if he were a student today.

“When I was a student, Harvard wasn’t anywhere near as diverse a place,” said Dingman. “I think now it would be so much more exciting to be in the College with students who were coming from all parts of the world, with need-blind admissions and much great diversity racially and ethnically.”

Dingman said many of the changes implemented over the years in the freshman dorms are positive.

“One thing that concerns me is that there was some missed opportunities when I compare my experiences with what is happening today,” Dingman said. “We were allowed to pick roommates, so I chose to live with somebody who also came from a small high school, so that was somewhat limiting.”

Since graduating in 1967, Dingman has held a number of administrative positions at Harvard, though he hasn’t quite spent his whole life at the University. Soon after graduating, he spent several years teaching secondary school in Connecticut and at Phillips Andover Academy in Massachusetts, working for Ted Sizer, the headmaster at Andover. During this time, he spent his summers working at Harvard’s Admissions Office.

Dingman’s admission to the Graduate School of Education for his Master’s degree marked the beginning of more than four decades of uninterrupted work at Harvard.

“To my surprise now, I’ve been here ever since,” he said.

Dingman has served as both an assistant to the Dean of the College and the Associate Dean of the College, and was previously a senior tutor in Leverett and Dudley Houses. He also briefly served as Interim Dean of Student Life after Stephen M. Lassonde stepped down from the deanship in January 2016 until Katherine O’Dair took over the position of Dean of Students in August of last year.

Despite this long list of positions in university administration, Dingman’s most prized title is his role as the Dean of Freshmen, a position he took over in 2004. He oversees academic, social, and residential life for College students in their first year.

“The changing nature of my work has kept me really excited about going to the office everyday,” said Dingman.

If there’s one aspect of Dingman’s job that he takes pride in the most, it’s the care that goes into creating a first year experience for students that is more enriching than the one he had fifty years ago.

“Now, we spend five weeks matching roommates by hand and we put you into entryways where you’re not going to find people who look just like you but where we hope there will be an ability to get along and learn from each other’s differences,” he said.

He keeps his own transition in mind today when working to cultivate an accessible freshmen year experience. He aims to do this through implementing programming like the First-Year Experience, a series of workshops and panels hosted for freshmen on topics like going to office hours, getting along with roommates, and managing time.

“If you can get the right start freshmen year, I think you’re set up for success for the years after,” said Dingman. “We do know a number of students struggle to find a place here and a sense of belonging. When you read about experiences like that on end-of-year surveys, it stings, but we’re really working hard on it.”

According to Undergraduate Council Vice-President Cameron K. Khansarinia ’18, Dingman’s dedication to students is his stand-out feature.

“He is definitely one of the most dedicated people I've had the pleasure of working with at Harvard. He just really cares so deeply for students and especially the freshmen experience,” he said.

Dingman said that working with students and finding new ways to make Harvard a more inclusive university was one of his favorite aspects of his job, which he described as “remarkable.”

“I think I’ve worked for seven different deans of the College and felt I learned something significant from each of them,” Dingman said. “I think I have the best job at Harvard.”