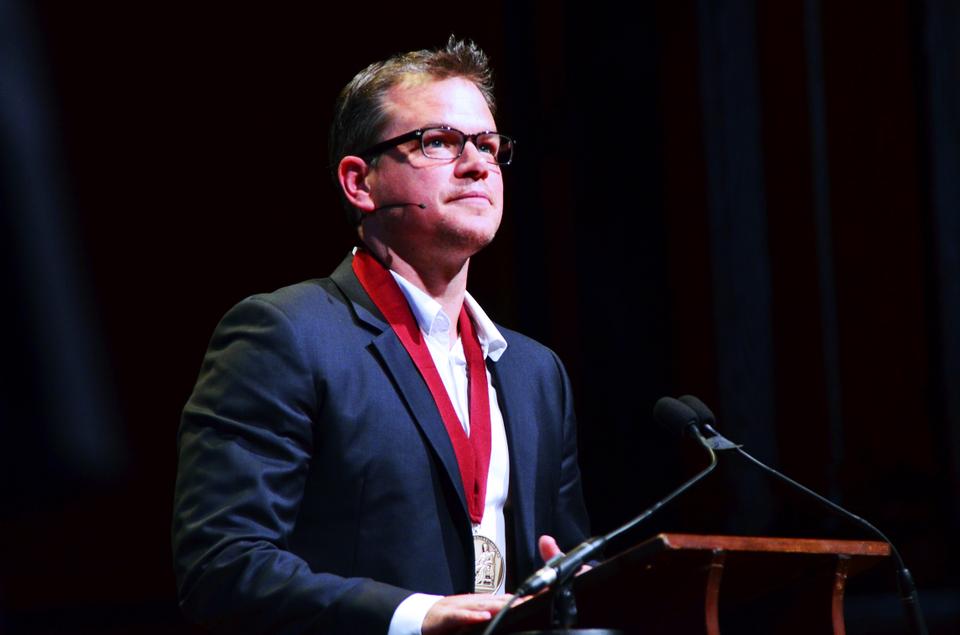 Matt P. Damon ’92 seemed poised for movie stardom in 1992. While other Harvard students were worrying about getting ready for adulthood, Damon had already appeared in several films and was working on the soon to be award winning script for “Good Will Hunting”.

“The first thing he said to me is that I was really lucky to room with [him],” Furman said. Damon was referring to the fact that he was going to be leaving campus toward the end of the year to appear in a movie, allowing Furman to enjoy the privacy and luxury of a freshman year single.

Furman said that native Cantabrigian Damon was a great friend who showed him a “different side” of Cambridge.

Damon also spent time with his friends from his high school, the Cambridge Rindge and Latin School, including actor Ben Affleck. Affleck often visited Furman and Damon’s Matthews Hall room freshman year, the trio doing things they “couldn’t do until [they] were twenty-one.”

Damon studied English, though he dropped out before graduation, while Furman focused on economics. Year later, then-President Obama would appoint Furman Chairman of the Council of Economic Advisors. When the two first met, Damon was so intimidated by Furman’s intelligence that he nearly turned around and went home.

The friends’ paths diverged at Harvard, although they remained close. Furman went to Adams and became integrated with leftists and activists. Damon went to Lowell and punched The Delphic final club.

Damon also joined the Harvard theater scene. One of his earlier roles was in musical revue “A...My Name Is Alice”—he had a minor role in the play after the original actor dropped out. Many of the actors in the show—who included China F. Forbes ’92 of Pink Martini and playwright A. Eisa Davis ’92—went on to become well-known in entertainment, film, and music.

Director Jennifer Giering ’92 remembered that Damon as a team player without “a performance ego,” qualities essential for the feminist show where women “shined.”

Damon also appeared alongside Joshua P. Anderson ’93 in a performance of “Burn This”.

“He already had a buzz,” Anderson said of Damon, adding that many of their castmates felt that Damon was well on his way to a successful career in film. “He was incredibly intense. He was not [in the show] to have fun or socialize. He was here to work.”

While in a playwriting class taught by Anthony Kubiak, Damon wrote the first draft of the script that would one day become Good Will Hunting as a final project.

The film’s love interest, Skylar, shares a name with Damon’s girlfriend at the time, Skylar S. Ulrich ’93, née Satenstein. Anderson suspected that the film’s Skylar was inspired by Ulrich, who is now a physician in Northern California. He recalls that Ulrich was “unlike any girl [they] had seen before,” with long blonde hair and a perennial motorcycle jacket.

“Let me tell you, I loved Harvard,” Damon said to the Crimson in 1997. “It was a huge, huge part of my life. I still have time left and I want to go back when I get a chance.”

Although he never managed to finish that English degree, Damon did return to campus to receive the 2013 Harvard Arts Medal.\

—Staff writer Michelle Y. Raji can be reached at michelle.raji@thecrimson.com.