Freshman Gina Kennedy didn't expect to play on the biggest stage for college women's squash. But she rose to the occasion.
By William Quan 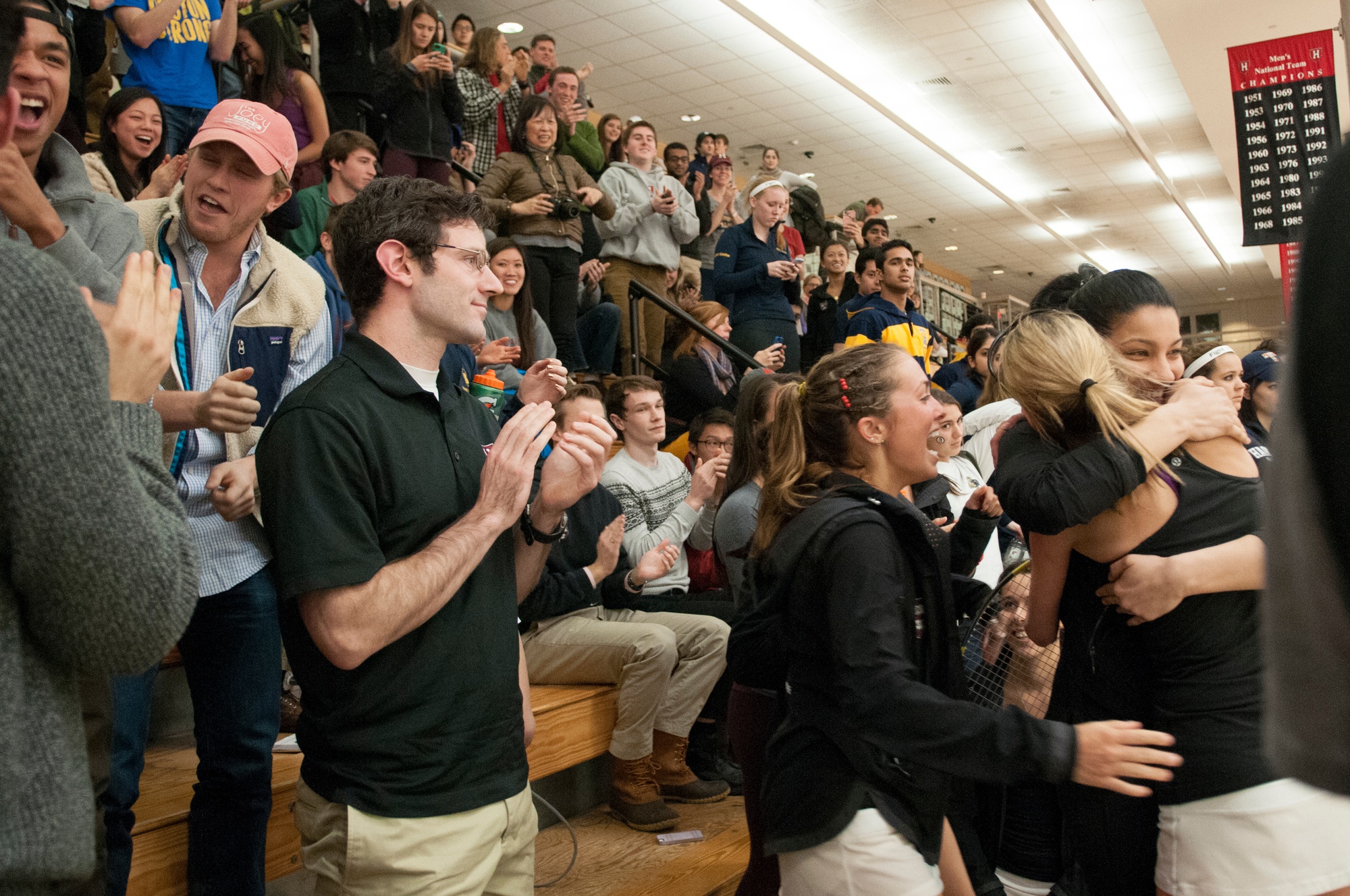 Eight months after arriving in Cambridge, Gina Kennedy accomplished a sporting trifecta that others would label as a lifetime accomplishment. Fresh off winning an Ivy League Championship, National Team Championship, and National Individual Championship, the freshman squash player has gone home for the summer with few other titles to train for.

But as many champions realize, one-time success is not enough. There’s always more to attain.

Although squash is played in a glass cage, the public perception of the sport is much more opaque. Not many college students know the rules of the sport, and even fewer can appreciate it. Playing it can be isolating. Stepping on the court brings the player into a dyadic world—personalities and playing styles clash.

Compound this deeply personal experience with rivalry, and the sport tailors to a niche group of strong-willed individuals. Gratification can be glorious, but defeat equally devastating, for there are few others with whom one can share the experience.

"I feel really lucky, actually, to have come into this team in this year," freshman Gina Kennedy said.

Kennedy and fellow first-year Amelia Henley brought their friendship and rivalry across the pond when the former England youth national teammates started college. Little has changed between them. The Brits compete fiercely in challenge matches during practice but hold a battle-tested friendship off the court.

“I feel really lucky, actually, to have come into this team in this year,” said Kennedy. “Everyone on the team is such great friends. Once I got here, obviously it was a very scary transition coming all the way from England and just moving to this new place. Obviously it helped to have Amelia there, but the whole squash team helped so much.”

Athletics teams often provide a support structure as students acclimate to the new academic environment. This social network can also change the experience of the actual athletic activity.

From travelling as a team to training together, the experience of playing squash now has a communal component. Intra-team competition, in the form of challenge matches, serves not only to distinguish but also to solidify bonds.

Most pragmatically, these exhibitions allow the coaching staff to rank athletes and draft lineups. But intra-squad rivalries can be a proxy to simulate the challenges athletes from other universities will throw at the Crimson, both in terms of skill-based challenges and mental training. It also closes the parity between athletics and elevates the team’s overall level of play.

In such an individual-focused sport, self-motivation and dedication often go hand-in-hand with success. Joining together as a team can elevate these characteristics and make the team better as a unit.

“Honestly, every single one of those freshmen had such a positive impact on the team and the team dynamic this year, on and off the court,” MacGowan said. “Gina and Amelia have incredible work ethics. They get to practice, and they have such a positive influence on the team, even as freshmen, which you might not necessarily expect.”

Student-athletes must be especially disciplined to balance schoolwork and athletic obligations. Still, Kennedy maintained as consistent a training schedule as when she plays at home.

Moreover, team training for Kennedy and the other freshmen provides for coordinated improvement and peer feedback. It also allows the team to form game plans, especially against the team’s rivals.

“I genuinely went into that match thinking that there was no chance that I could win,” Kennedy said. “Not that I played as though there was no chance for me to win. My mental preparation was that I was very relaxed because I wasn’t expected to do anything.”

This nothing-to-lose attitude put Kennedy up two games. From there, she secured a 3-1 victory. 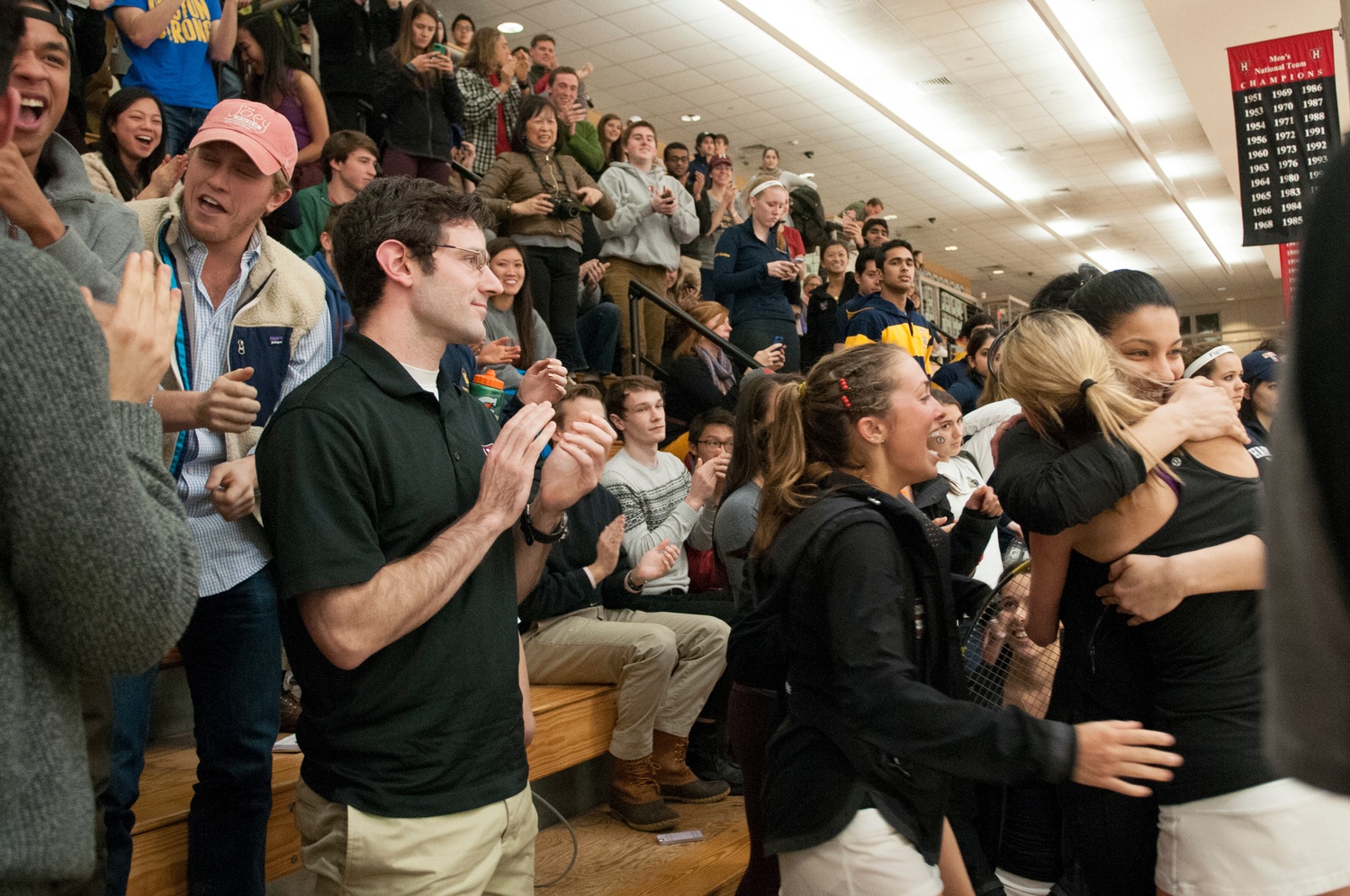 Perhaps more impressive than the honors Kennedy earned this year—Ivy League Rookie of the Year, First Team All-Ivy and College Squash Association All-American—was her ability to transition from a team environment to an individual player in one week, while winning two national titles.

“For me, personally, I saw my friends weren’t training anymore and having fun, whereas me and a few others still had to come down to the courts every day and train,” Kennedy said. “There was definitely a different feeling about it. Nobody was as fired up for it as Team Nationals.”

The lonely moments preceding her second national championship in seven days gave way to an outpouring of support.

“I’d never really experienced that amount of support,” Kennedy said. “Even though I have been playing squash my whole life, my friends back home don’t understand what happens or anything. I never had that experience when I’ve come back to school the next day, and everybody’s [said], ‘Oh my god, congratulations!’”

Coming back to Cambridge as a champion, Kennedy felt the support that a team could provide. With a year of college under her belt, she hopes that she can provide a similar experience for incoming freshmen.

“It’s exciting that we get new freshmen in,” Kennedy said. “Just hopefully I can show them as good as a time as the people on the team showed me in my freshman year.”