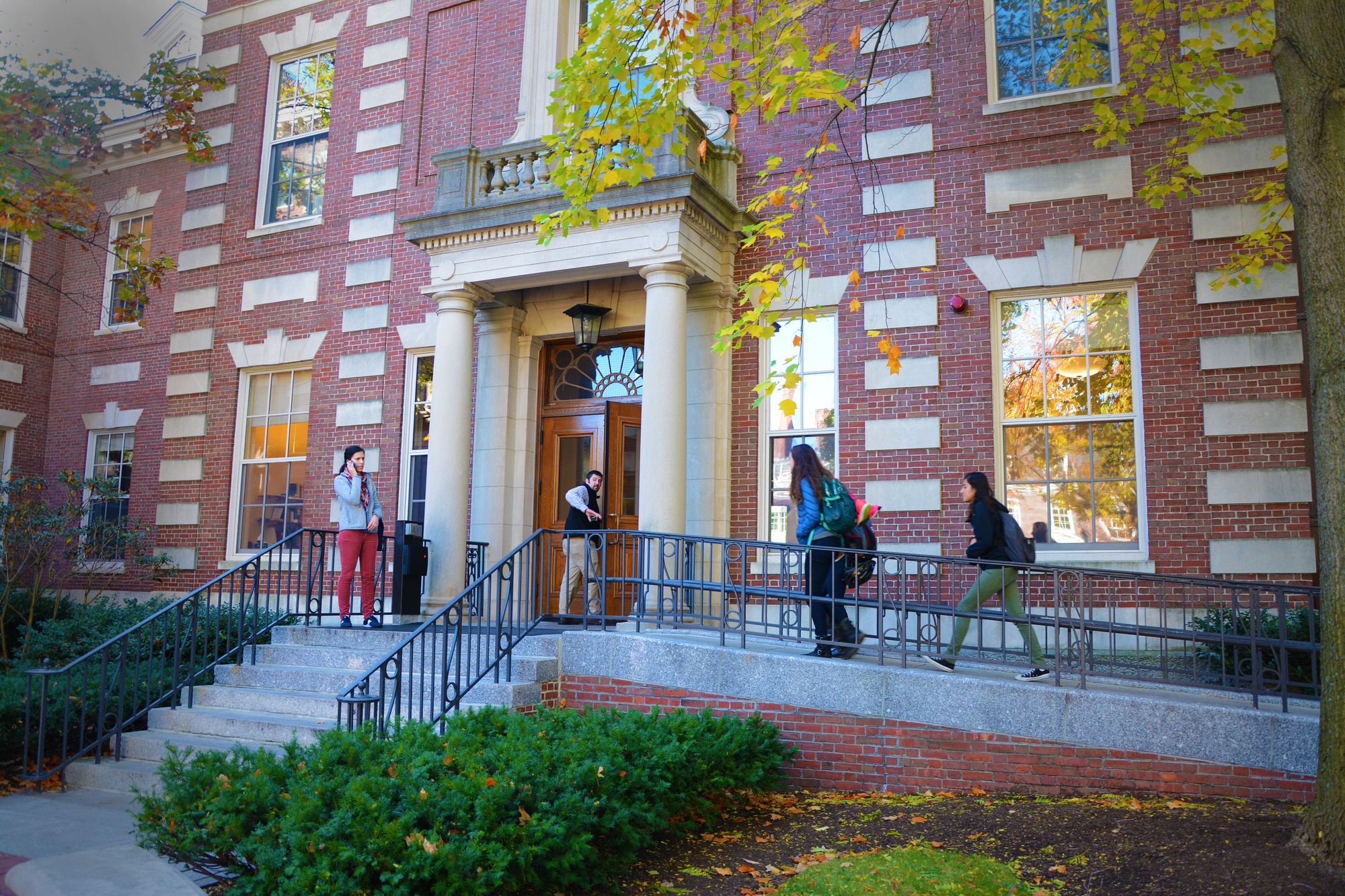 Students and faculty flow in and out of the Barker Center, home to the Humanities Center at Harvard, on a Monday morning. By Annie E. Schugart

The Four-Decade Road to Ethnic Studies

At Harvard, real pressures—both financial and ideological—loom along the road to a comprehensive ethnic studies program.
By Brandon J. Dixon and Kristine E. Guillaume

Though these numbers may frustrate the University’s ethnic studies advocates, another is far more troubling: zero—the number of ethnic studies concentrations at Harvard.

So when the Committee on Degrees in History and Literature, home to Harvard’s oldest concentration, announced in April a new field for ethnic studies, reception among some advocates was muted.

Tessa L. Desmond, the administrative director of Harvard’s Committee on Ethnicity, Migration, Rights—originally an Ethnic Studies secondary—said that while History and Literature administrators have framed the new field “as a natural first spot to begin,” ethnic studies offerings have in fact been decades in the making.

“Ethnic studies has been growing pretty consistently since the establishment of the secondary field in 2010,” Desmond said. “They’ve just been these small, incremental changes and shifts.”

More than four decades have passed since the first push for ethnic studies in 1972, and the waiting game, for some activists, is getting old. But for Harvard’s administrators, real pressures—both financial and ideological—loom along the road to a comprehensive program. As many of the student leaders pushing for the discipline prepare for graduation, dissent over the future of ethnic studies at Harvard continues.

In 1972, then-Harvard history professor John Womack compiled a list of undergraduate courses that could constitute a program focusing on the culture and history of ethnic groups in the United States, marking the first of twelve proposals that have been submitted to create the field.

Since then, the field has gained ground in uncertain fits and starts.

Through most of the 2000s, ethnic studies proposals faced significant faculty and student pushback, Desmond said. Ideologically, opposition to the program ran the gamut: some argued the program would not generate enough student interest to be worthwhile. Others argued that ethnic studies would divide Harvard along racial lines, and yet others maintain that the discipline is more political than academic.

Diana Sorensen, a former divisional dean of arts and humanities, convened a group of faculty in the 2008-2009 academic year to rethink ethnic studies as a discipline.

“That reading group came up with concepts of ethnicity, migration, indigeneity, and human rights, and said these four topics touch on ethnic groups in America in really interesting ways,” Desmond said.

The following academic year, the EMR secondary was created—at the time dubbed “Ethnic Studies.” African American Studies and Music professor Kay K. Shelemay, who chairs the committee for Ethnicity, Migration, and Rights and oversaw the name change in 2012, said the rebranding served to incorporate human rights into ethnic studies.

The renaming of the secondary field presented a new problem, though: ethnicity, migration, and rights, while more comprehensive, distanced itself in name from ethnic studies, what so many students were intensely working towards.

Desmond said she believes the name change obscures decades of work towards ethnic studies at Harvard.

“The effect, though, is that I think students don't recognize that we have this long history of ethnic studies,” Desmond said.

Shelemay said that although human rights are incorporated into the field, “ethnicity and ethnic studies remains our primary mission and that has been our mission for decades at Harvard.”

What some call Harvard’s sluggish progress towards ethnic studies is fueled by a variety of factors that divide advocates. For one, ethnic studies proponents disagree on a precise definition of the field.

Some, like ethnic studies advocates Sally Chen ’19 and Kaipo T. Matsumoto ’17, say they define the field as a holistic study of ethnic minorities in United States history.

“Ethnic studies is not the centralized space where you do different Asian American, Latinx, and indigenous studies, Muslim American studies,” Matsumoto said, adding he views it instead as a discipline “that looks at the US in its entirety, at its place in the world, in relation to the study of race, ethnicity, oftentimes class and gender as well.”

“In Ethnic Studies, I can learn about a community of Latinx farmworkers in California and how their income status and ethnoracial identities intersect,” Vasquez-Rodriguez wrote in an email. “On the other hand, if I wanted to study an indigenous group in Argentina, that would be more of a study of ethnicity.”

Another consideration preventing the advancement of ethnic studies is a lack of financial resources—a constraint exacerbated in part by shrinking federal funding for the arts and humanities and the lackluster performance of Harvard’s $35.7 billion endowment. Consequently, Harvard is hard-pressed to fund faculty appointments in ethnic studies, according to Dean of Arts and Humanities Robin Kelsey.

Faculty members who are drawn to the University may find scarce resources to further their scholarship. One solution to faculty recruitment problems is to “cluster hire”—hiring several faculty members in the same discipline at once. But this tactic may be even less feasible given financial pressures.

“We’re often stretched pretty thin. It’s not just the classes that we teach, and the students that we advise,” Park said. “Ethnic studies is not just an academic project, it’s a political project. It’s important because it offers a supportive space for students of color, or first generation students who may feel a little bit unwelcome here at Harvard.”

Chen said it is difficult to offer courses on a range of ethnic backgrounds without the manpower and funding to do so.

In recent months, ethnic studies at Harvard made headway after the degree committee on History and Literature began offering a field in the discipline in April.

In December, the Ethnic Studies Coalition circulated a University-wide petition calling on Harvard to establish an ethnic studies department, create a center for research in the field, and hire more faculty. Lauren Kaminsky, the director of undergraduate studies for History and Literature, said the petition partially motivated the creation of the new History and Literature field.

According to Kaminsky, several students in the concentration’s American Studies track have already written theses relating in some way to ethnic studies. She added that the new track seeks to provide a formal pathway for scholarship in the field.

“The only thing that’s going to change with the ethnic studies field is that, going forward, we’ll be able to actually advertise that we’re looking for people to teach in ethnic studies, but our hope is that we’ll get a wider applicant pool,” Kaminsky said.

To date, the committee for History and Literature has hired 11 new lecturers to join the staff in fall 2017, and Kaminsky said a “high proportion” of these hires have extensive training and expertise in ethnic studies.

But some say these lecturers, who often must leave their posts within three years and are also expected to lead tutorials and advise undergraduate theses, may be overworked. Park said that lecturers’ job requirements might hinder efforts to place ethnic studies on firmer ground.

Park, one such lecturer, said his position is at times “exhausting,” and that the short tenure can “make it that more difficult to sustain a movement for ethnic studies.”

Kaminsky emphasized that hires represent a “small scale” step towards more ethnic studies offerings, and that History and Literature hopes to see more long-term faculty at Harvard in coming years.

“We are really happy to help in any way,” she said.

By some measures, it already has. Kaminsky said she estimated about five to ten rising juniors would pursue the concentration’s ethnic studies track this year.

Matsumoto and Chen said the field was a promising administrative move, although they intend to follow up with the College on next steps.

“We were very much not opposed to [the ethnic studies track], but militant in not letting it stop there,” Matsumoto said. “We still feel that way but there are ways to celebrate the small victories that the ethnic studies for Hist and Lit have accomplished.”

“It seems to be like a necessary first step, but I’m sure nowhere near enough and nowhere near the last step,” she said.

Activists and administrators alike cite hiring tenured ethnic studies faculty as a top agenda item for the future of the field at Harvard—a future made uncertain by tight budgets.

Administrators like Desmond say Harvard should dedicate its existing financial resources towards building an ethnic studies research center, which she called an “intermediary” between the current History and Literature track and an expanded program in the future.

For Kelsey, the way forward lies in making the effort a “cross-generational” conversation that draws in Harvard affiliates from all age groups.

While large and established minority groups on campus have underclassmen who can continue advocating for ethnic studies, smaller groups such as Harvard’s Native Americans will have more difficulty passing the baton, according to Matsumoto, an outgoing member of Native Americans at Harvard College.

“We’re freaking out,” he said. “We do have underclassmen; the indigenous side doesn’t. We might have two, one, maybe. Asian American side has several. The Latinx community has several.”

Kelsey also said he intends to collaborate with Dean of Social Sciences Claudine Gay and Dean of the Faculty of Arts and Sciences Michael D. Smith to make ethnic studies more interdisciplinary.

“We took this year as by no means some kind of decision that the future belongs to the art and humanities with respect to this issue,” Kelsey said.

The field is growing out of the humanities division at the College, which, according to Desmond, “leaves students and faculty working in the social sciences without an analogous program.”

“I look forward to doing my part, in conversation with students and faculty throughout the division, to ensure that ethnic studies thrives at Harvard, including within the social sciences,” Gay wrote in an email. “I come to this with an open mind about what the ‘solution’ will be, though my guess is that it will be multi-faceted as befits the enterprise.”