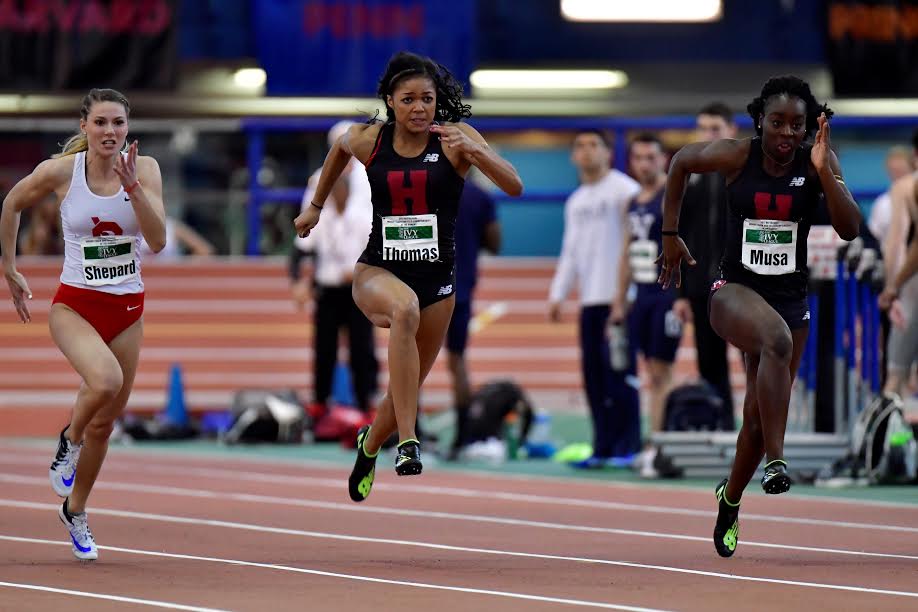 The Florence Flash: Female Athlete of the Year, Runner-Up

Pictured above, Gabby Thomas enters her junior year as one of the most prolific sprinters in Harvard history. By Courtesy of Harvard Athletic Communications
Sophomore sprinter Gabby Thomas broke records left and right during the indoor and outdoor track seasons.
By Cade Palmer

Gabby Thomas just might be the most prolific racer ever to run at Harvard. She is undoubtedly one of the fastest.

The sophomore has dominated the sprint scene in the Ivy League for the past two years, and as the 2016-2017 season wraps up, Thomas has cemented her place as one of Harvard’s most accomplished athletes.

“Last season I came in not really expecting anything,” Thomas said. “This season I have a lot of pretty concrete goals for myself that I knew I was capable of doing. In that sense, it was a lot more focused and goal-oriented.”

From the first meet of the indoor season, Thomas was already breaking records. She opened the season with a 300-meter dash time of 38.03, a program best. Only one month later, the sprinter claimed the program's second-best time as well, with a 38.60 second sprint in the event.

While Thomas also ran the 60-meter dash in the first two meets of the indoor season, it wasn’t until the Indoor Heptagonal Championships that her dominance was made known. Already holding the school record in the event, Thomas crossed the finish line 7.29 seconds after the sound of the gun, breaking both the school mark and the Ivy League record. The following day, the sprinter was crowned Ancient Eight champ for the second year in a row in the event.

Despite holding program records in both the 60 and 300-meter dashes, the two aren’t even Thomas’ best indoor events—the 200-meter is. It was at the Columbia East-West Challenge in January that Thomas became nationally relevant in the event. Taking bronze at the meet, the sophomore set both a school and personal record with a time of :23.01. The pace ranked fourth among all NCAA competitors at the time.

“I always like watching [Thomas] compete at the highest level because she carries herself with respect and dignity,” said relay partner Zoe Hughes. “A lot of people wouldn’t expect Harvard athletes to make it to things like NCAA Finals, let alone make it to the podium like she did last year. She’s so calm and relaxed about it and just seeing her go through that has helped so much.”

That school record would not stand for long. Again at Ivy Heps, Thomas broke both her own school record and the Ivy League record in becoming the league champion in the event. Finishing a full second ahead of the rest of the field, Thomas crossed the finish line in 22.88 seconds. The effort was enough to qualify her for NCAA Championships.

"I always like watching [Thomas] compete at the highest level because she carries herself with respect and dignity," freshman Zoe Hughes said.

“Heps is just so much fun, it’s very team-oriented,” Thomas said. “You’re winning points for the team. I didn’t really go to PR in all my events because I was doing so many. It’s just really fun to go out and compete with your team.”

Competing again in the 200-meter dash, Thomas posted a 22.89 second preliminary time, only .01 seconds behind her school and division record, to advance to the finals. In doing so, she became the first Ivy League racer to advance to the finals in the event. She ultimately finished eighth nationally and was awarded First Team All-America honors.

The indoor season, though, was just a preview of what was to come in outdoors. In the very first meet, Thomas took gold in the 100-meter with the fastest time in the East region at that point, contributed to the 4x100-meter relay team that posted the third-best mark in program history, and clocked the tenth-fastest time in program history as a leg for the 4x400-meter relay.

That was child’s play.

Not one to monopolize only sprints, the sophomore competed in long jump for the first time in the outdoor season and won at the Harvard-Yale vs. Oxford-Cambridge Meet. She also broke a 15-year school record with a jump of 6.1 meters. That mark did not stand for long, as she improved upon that record two weeks later with a 6.27-meter jump.

Next was Outdoor Heps. There, Thomas won every single event that she participated in. She won gold in the long jump, the 100 and 200-meter dashes, helped set an Ivy League record in the 4x100-meter relay, and aided in winning the 4x400-meter relay. Going five-for-five, Thomas was unanimously voted Most Outstanding Performer of the meet.

Even still, Thomas’ season has not yet drawn to a close. In late May, she will compete with several other Harvard athletes in the NCAA Eastern Preliminary Round in Lexington, Ky. Success in the Bluegrass State will bring her to the NCAA National Championships for the second year in a row.

“It’s just a matter of making sure I’m practicing and doing what I have to do to run the best times,” Thomas said. “What I’m personally focused on is making sure that I prepare myself for Nationals at Regionals.”