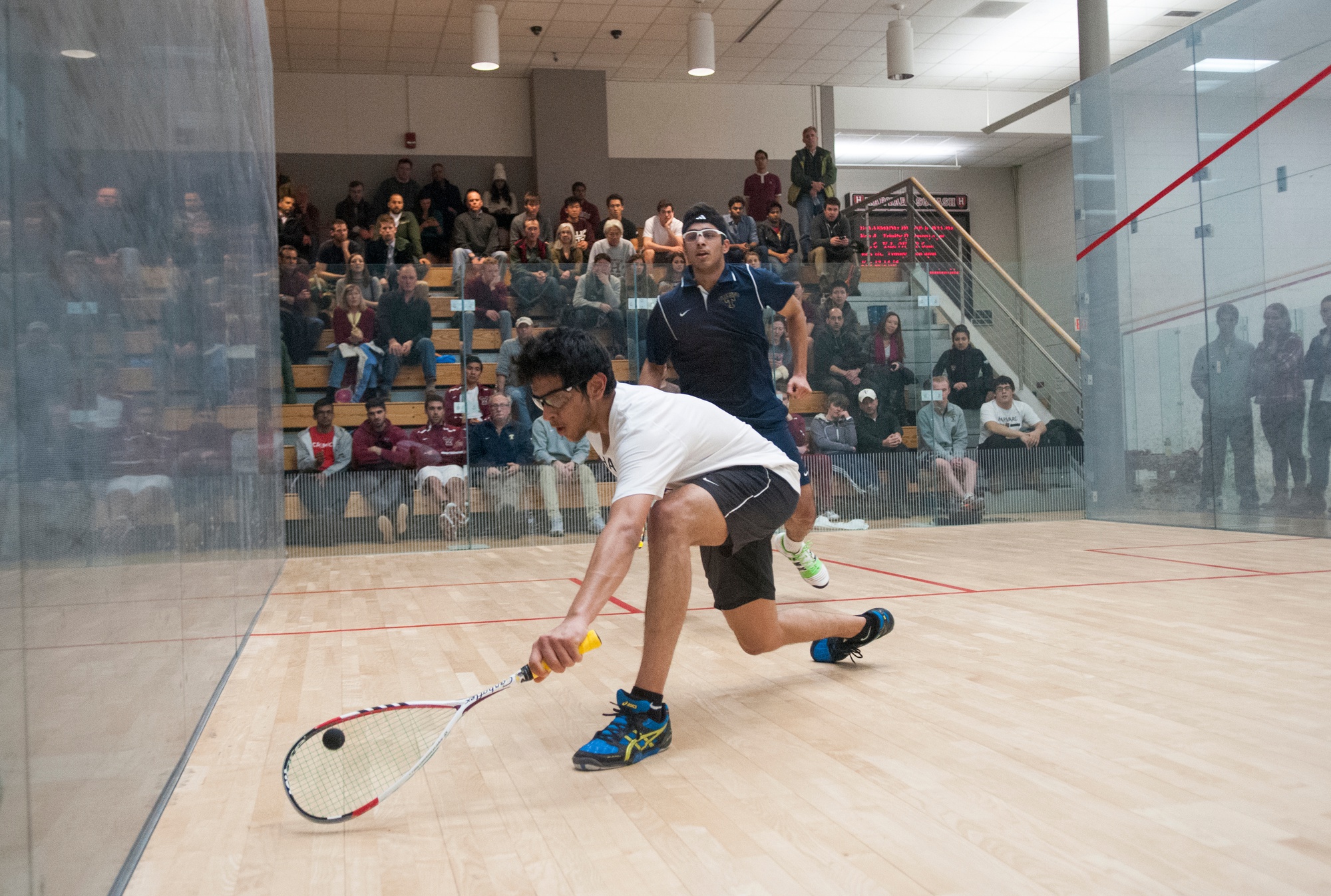 Madhav Dhingra, now a junior, lunges for a shot in a 2015 match against Trinity.
By Jackson M. Reynolds, Crimson Staff Writer

On the biggest stage, they fell just short.

Trinity sophomore Michael Craig and the rest of the Bantams stopped their momentum and flattened their hopes in mere seconds. The prospect of winning a 32nd national championship failed to materialize, but a phenomenal run of success helped provide them that chance at glory.

Over the past few months, the No. 2 Harvard men’s squash team had perhaps its best spell of play since it last won the CSA National Team Championships during the 2013-2014 season.

The Crimson (13-2, 7-0 Ivy League) completed an undefeated Ancient Eight season en route to a No. 2 ranking. Along the way, Harvard continued to accumulate victories against top-ten competition, besting each of the eight teams ranked below it in the category. St. Lawrence, Columbia, Rochester, Drexel, Penn, Yale, Dartmouth, and Princeton proved unable to match the Crimson’s quality.

One team had Harvard’s number, though. Trinity, winners of 16 national titles in the last 20 years, handed the Crimson its two defeats in heartbreaking fashion, both 5-4. The teams were ranked one-two in both meetings, with one coming during the regular season and the other in the National Team Championship final. As momentum swung back and forth throughout, both matches could have gone to either team.

Individually, Harvard players had strong seasons, as well. In the CSA Individual National Championships, freshman Saadeldin Abouaish reached the quarterfinals in the Pool division, while sophomore Alexi Gosset claimed victory in the consolation bracket of the Molloy North division.

The squad finished with a 103-32 record overall in individual matches across its 15 team competitions. Many of those wins came in dominant fashion over three sets.

“I'm happy with the season on a whole,” freshman Sean Hughes said. “I think the Ivy League championship and our strong road wins against St. Lawrence and Rochester were some of the high points of the season.”

After consecutive 6-3 road wins against No. 3 St. Lawrence (14-4, 5-0 Liberty League) and No. 5 Rochester (13-4, 3-2 Liberty League) during a late January weekend during winter break, the Crimson vaulted up to the nation’s top ranking. Harvard found the majority of its success against the Saints and Yellowjackets at the No. 4 through No. 8 positions. The quintet accounted for nine of the team’s 12 victories over the weekend.

Before its losses to the then-undefeated Crimson, Rochester was the top-ranked squad in the nation, having bested No. 1 Trinity (19-1, 6-0 NESCAC) the weekend before, 5-4. By season’s end, the Yellowjackets were the only squad to knock off the Bantams.

When considering what drove the team’s success this year, Hughes credits the strong work ethic present in the group and cohesive team dynamic that players developed. This closeness helped team members feed off one another when competing in matches and developing their game during practice.

“I think when a team gets a lot of strong and driven players like we had this past year, everyone pushes each other to work harder,” Hughes said.

Largely, team leaders and returning players set that social tone. But one would be remiss to neglect the contribution of the Crimson’s rookies to its recent run of success. In the squad’s two losses to the Bantams, the freshmen played an important role, nearly dragging the team to victory.

In both matches, the Crimson jumped out to early leads that Hughes’ victories helped build. Those early advantages faded in the next wave of matches, however, and it was up Abouaish to stop the slide. During the regular season, the Cairo, Egypt native was unable to execute the task, but in the championship final, he unflinchingly fought his way to a crucial victory against Trinity freshman Kush Kumar in three sets.

Another match featuring a Harvard freshman went down to the wire. Freshman Timmy Brownell took his match with Craig to to a fifth set. With the teams locked in a dead heat at 4-4, the crowds filled in behind the glass waiting in anticipation. Discernibly exhausted, the Belmont, Mass., native continually returned one impressive shot from his opponent after another, throwing himself all over the court.

Brownell ultimately gave way to Craig in spirited showings on both occasions, leading to agonizing defeats. But the fact that the team came so close with the help of these freshman was an accomplishment in itself.

In their other matches throughout the season, the rookies thrived. Abouaish completed the campaign with a 10-5 record while playing at the No. 1 position. Along the way, he picked up a dominant 3-0 victory against the winner of the CSA Individual National Championships, Columbia junior Osama Khalifa, 11-9, 11-5, 11-1.

Hughes went undefeated, 14-0, in his individual campaign with most of his matches coming at the No. 6 position. Brownell finished 12-2, with his only blemishes coming to Craig at the fourth slot. Hughes had the first undefeated rookie campaign for Harvard since junior David Ryan accomplished the feat in 2014-2015.

“The freshmen especially performed incredibly well,” co-captain Bryan Koh said. “Sean plays with huge intent and obsesses over what is the right and wrong thing to do in situations, which gives him the extra focus. Timmy is as relaxed as one can be in a national final, allowing him to play freely and move his opponent around confidently. Saad is incredibly talented with the way he strikes the ball, and his speed makes it that much harder for opponents to read him.”

Hailing from Newton Square, Pa., Belmont, Mass., and Cairo, Egypt, the three freshmen used their varied backgrounds and styles of play to become a successful part of the larger team unit right from the outset. As they became more comfortable, everything started to come more easily. Brownell credits this transition to his older teammates.

“I think that the freshman class had so much success this season because our teammates went above and beyond to make us feel like a part of the family from day one,” Brownell said.

“As a freshman, I was very happy with Mike [Way] and the rest of the coaching staff,” Hughes said. “Mike is good at allotting a lot of time to individual players and was very helpful in my game’s development throughout the season. I think I played better as the season progressed, and played my best squash at the end.”

While all three of these players were new to the college circuit this season, they were no strangers to competitive squash. Before coming to Harvard, the trio played heavily in prominent domestic and international tournaments.

In juniors, Abouaish earned the world’s top ranking for a period, finished third at the 2015 World Junior Championships, and was a runner-up at the 2016 tournament. He also finished as a three-time runner-up in the British Junior Open.

Hughes and Brownell made more noise on the U.S. circuit, although both Americans also competed in the 2015 World Junior Championships. In the 128-man tournament, Abouaish bested Hughes in the second round, 11-6,11-7,11-4, en route to his third-place finish. Meanwhile, Brownell lost in the round of 16 to the eventual champion, Peruvian national Diego Elías.

Domestically, Brownell was the 2014 U19 U.S. Junior Open Champion and a three-time U.S. Squash All-American, while Hughes was a three-time national champion and a four-time All-American. Moreover, in back-to-back years, both finished as runners-up in 4-3 losses to Brunswick School in the U.S. High School Team Squash Championships first division.

This seasoning on the junior circuit served the rookies well. Accolades have accumulated as a result of standout play. For his efforts, Abouaish won Ivy League Rookie of the Year and earned a place on the College Squash Association All-American and All-Ivy first teams. Brownell was a First Team All-Ivy pick as well.

Rookies were not the only members of the Crimson to distinguish themselves. In recognition of their accomplishments this season, junior Madhav Dhingra, junior Bradley Smith, and Way received notable honors. Way earned Ivy League Coach of the Year, while Dhingra and Smith were granted First Team All-Ivy status for the second and third times in their three-year careers, respectively.

While graduating seniors did not garner as many accolades, the veteran cohort played an important role. Koh, Dylan Murray, and co-captain Devin McLaughlin collectively sported a 32-6 record this season while playing at the seventh, eighth, and ninth positions, respectively. McLaughlin even polished off a perfect 13-0 record in his final act.

The group’s consistent presence at the bottom of the ladder provided stability to the squad, which allowed those above them to play more freely and focus in on their own game. Their steadying presence on the court and in the locker room nearly allowed them to bookend their careers with national titles.

Looking to the future, a majority of the Crimson’s top nine players return to the squad next year. In fact, all of Harvard’s top six players return. However, other top competition is also retaining much of its talent, leaving the Crimson much work to do in the coming months.

“Trinity has a very strong program right now and edged us 5-4 in both matches,” Hughes said. “We keep six of our top nine players next year, and they also keep the majority of their top nine players. I'm looking forward to playing them again next year.”

With another year of experience under their belt, newly elected co-captains Dhingra and Rya, must continue to set the hardworking tone that Harvard maintained throughout the 2016-2017 season.

“That's something I want us to carry on for next year, as I can only hope our incoming freshman have as positive an experience as we did,” Brownell said. “We've always been a talented team, but I think this season showed that a great team dynamic is the real difference maker between top-notch teams that we compete against.”