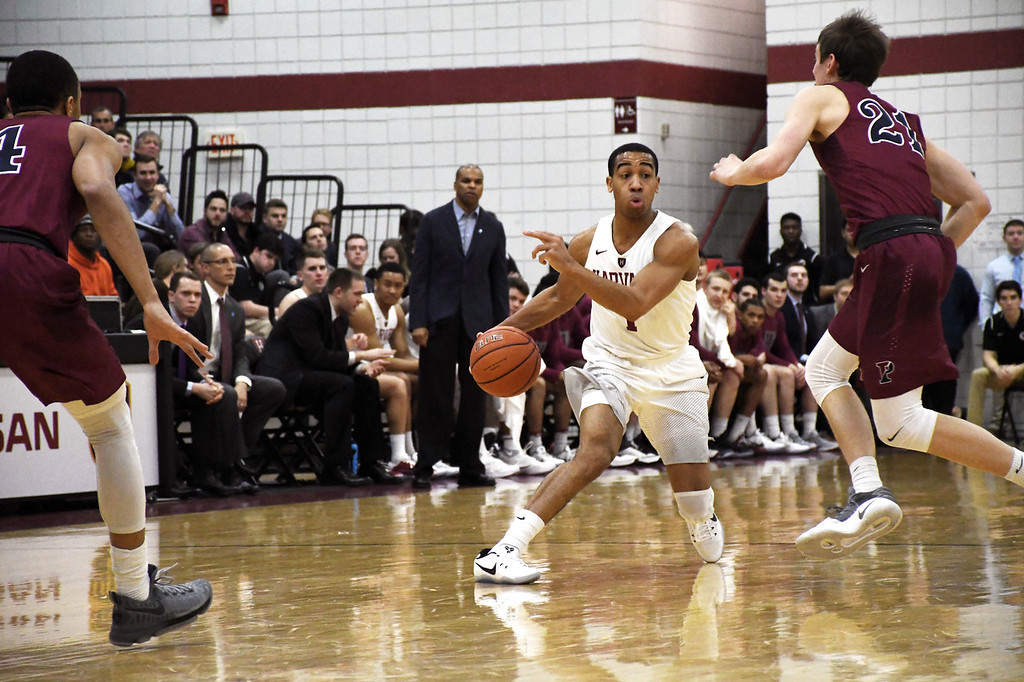 Siyani Chambers’ path to being one of the best players to ever put on a Harvard uniform was anything but smooth.

At first, he had no interest in coming to a relatively unproven basketball program, but after visiting campus and talking to the coaching staff, he decided to buy into the vision that Coach Amaker laid out for him as the Crimson’s next point guard.

After co-captains Brandyn Curry and Kyle Casey withdrew just before the start of his freshman season, Siyani found himself with the starting spot firmly in hand. While matching up with future pros, including Shabazz Napier, Matthew Dellavedova, and Langston Galloway, he became the first freshman to be named to the All-Ivy first team. He then led Harvard to the program’s first NCAA Tournament win, as a 14-seed, against New Mexico.

Siyani hosted me on my official visit not too long after that win, and while I was spending time with him throughout the weekend, he obviously got a lot of love from people on campus. He was appreciative, but if you know Siyani, the last thing he does is bask in accomplishments. All he was talking to me about was the next season: improving, developing chemistry with the soon-to-be-reinstated players, and following up with another Ivy League title. That told me all I needed to know about what kind of player and competitor he is. He was ready for an encore. That’s how Siyani is.

Siyani and Coach Amaker have a very strong bond, and it comes from trust and mutual respect between them. Coach knows that Siyani was essentially an extension of him on the floor, in the locker room, and across the River, in terms of leading by example and making sure guys were on top of their stuff.

When I showed up as a freshman, I don’t think Siyani and I had a full conversation for at least a month or two. It felt like he was testing me. I felt like once the season rolled around, I had started to prove myself and started earning the respect from him that we have built up over four years. We had the best team in program history that year, and part of it was because of how competitive practices were. I was lucky to have been able to go at it with those guys and really learn what it was like to compete, especially with guarding Siyani everyday.

"Coach Amaker would say that while Wes Saunders was our 'best' player while he was here, Siyani was our 'most important' player."

Coming off of three straight NCAA tournament appearances, and three straight all-conference nods, Siyani spent the summer after his junior season in Portland working for Adidas. He was able to work out with All-Star guard Damian Lillard and really fine-tune some parts of his game. That’s when he got the news that he had torn his ACL in a workout.

Obviously, this development was devastating to him, the team, and the coaches. We knew what it meant for our program: We were already very young, and now we would be missing our captain, our floor general. He could have stayed in school that year, graduated, and played his fifth year of eligibility almost anywhere. Any big-time program with a scholarship available would have offered him. He had earned it and, to me, had nothing left to prove. What he had accomplished here was enough.

Not to him, though.

Siyani withdrew from Harvard to rehabilitate his knee and retain his eligibility, and he ended up working in the Athletic Department during the spring so that he could be around the team. He developed relationships with the freshmen that he had never played with. He gave advice to upperclassmen on leading the team. He made us better despite not stepping on the floor. Again that’s how Siyani is.

Unfortunately, in my time to help fill the void at point guard, I tore my ACL in our second game. Siyani was there for me. Seeing him around campus and watching his journey to come back was inspiring to everyone. He was ready to prove he hadn’t lost a step.

This season was our senior season, and having Siyani back was a huge benefit for us. Much like having Brandyn as a mentor to Siyani, having Siyani as a mentor to our freshman point guard, Bryce Aiken, was critical. Bryce, a former top-100 recruit, is extremely talented, but where I thought he needed to improve was in his ability to make other players around him better. I think watching Siyani be captain while also making everyone better really helped Bryce develop as a player.

Siyani is one of the best players to ever compete at Harvard. Coach Amaker would say that while Wes Saunders was our “best” player while he was here, Siyani was our “most important” player. That’s a testament to his talent, playmaking ability, and leadership. Thanks, Si, for what you did for Harvard basketball. Good luck on the next chapter of your career, wherever you land.