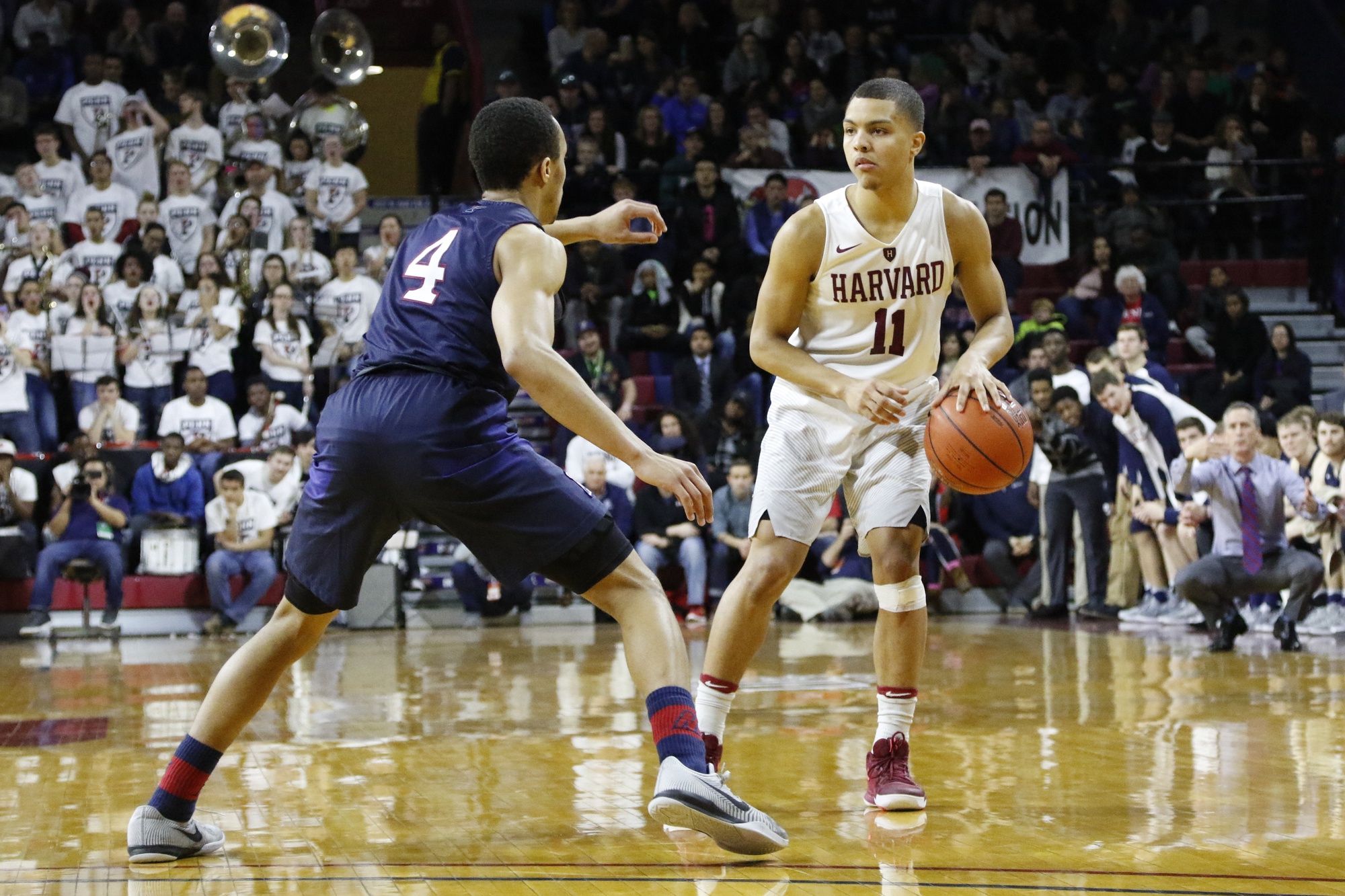 Bryce is Nice: Male Rookie of the Year, Runner-Up

Highly touted as a prospect, Aiken brought home Ivy League Rookie of the Year honors and shone brightest when the game was on the line.
By Troy Boccelli

Throughout the past season, Harvard basketball coach Tommy Amaker tended to describe his team’s success through a certain formula.

This formula was simple—“bench and balance.”

It was also true. In a conference dominated by teams with one or two stars, Amaker’s squad was deeper than most. On a given night, he would often play more than half his 20 player roster.

The special aspect about the Crimson’s bench, though, wasn’t necessarily its depth or balance. In fact, what stood out was often the efforts of a single player—freshman guard Bryce Aiken.

Playing at Yale in February, Harvard’s reserves combined for 34 points. However, 27 of those 34 points came courtesy of Aiken off the bench. Of the Crimson’s 26 games, the freshman started nine but still managed to end the season as Harvard’s leading scorer. If there were an award for Sixth Man of the Year in the Ivy League, Aiken would no doubt be on the shortlist.

He would have to settle for Ivy League Rookie of the Year and an All-Ivy first-team nod.

The numbers speak for themselves. The freshman averaged nearly 15 points a game to go with 2.8 assists and 2.2 rebounds. He was the first freshman to lead Harvard in scoring since 1988. Reflecting on that performance against Yale on the road, Amaker hardly seemed surprised. 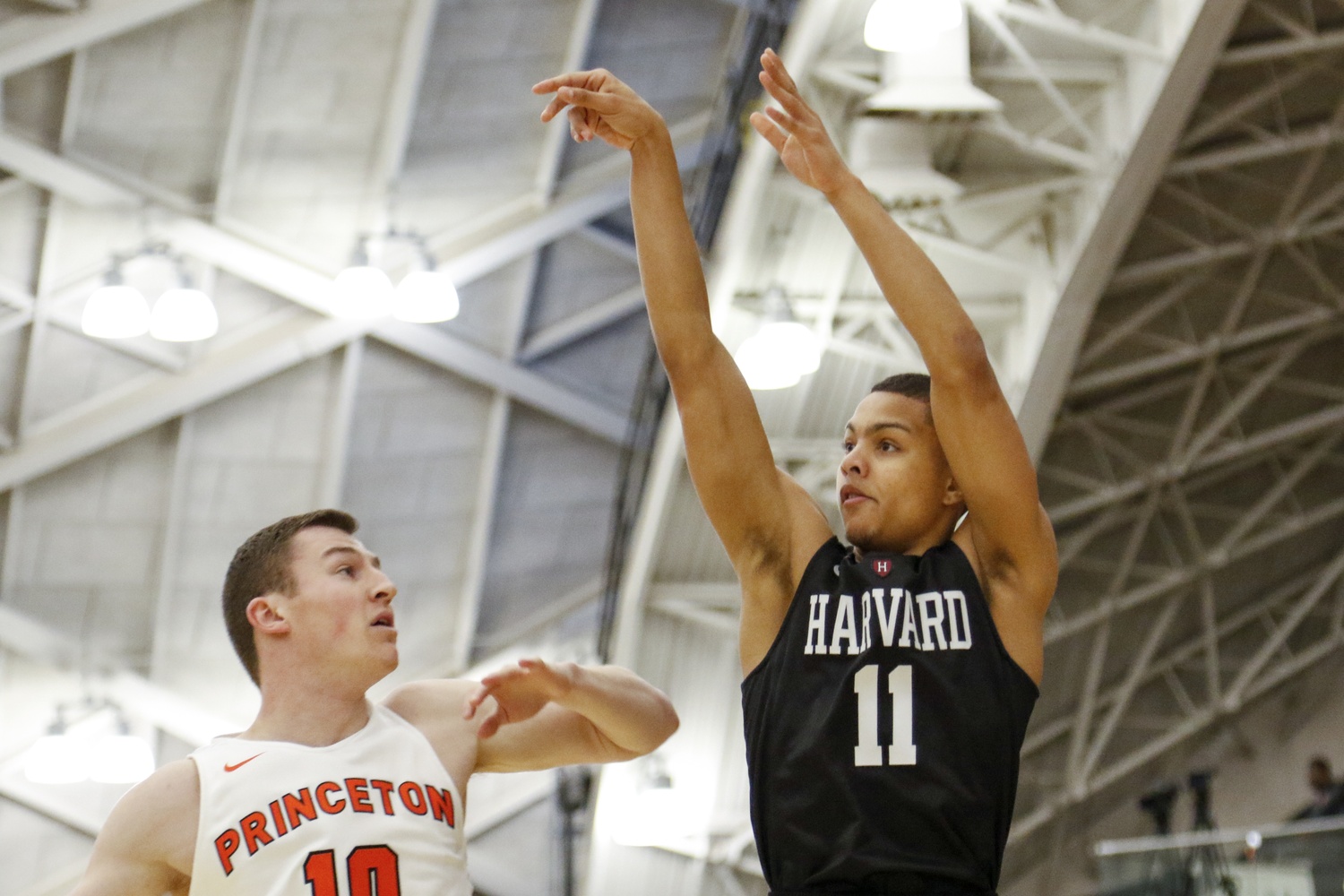 Freshman guard Bryce Aiken follows through on a jumper at Princeton. By Timothy R. O'Meara

Aiken certainly had an impact, but it’s an impact that went beyond sheer scoring. On a team full of talent, Aiken, much like co-captain Siyani Chambers, was a player Amaker gave a green light to on offense.

At times, this green light could end in performances like the contest at UMass, when the freshman went 0-of-9 from the field for six points and four turnovers in 23 minutes.

At his best, though, Aiken seemed unstoppable.

He made this ability clear in the season opener. Playing against Stanford in Shanghai, he led all Harvard scorers with 21 points off the bench. In contrast to a team—and largely a conference—that thrives beyond the perimeter, Aiken showed early and often that he would drive into the paint. He finished that game 8-of-8 from the line.

While Aiken bounced from highs to low, he brought a brand of consistency that not many players on the Crimson could. In a tight game, Amaker could always count on the freshman to show up.

This tendency was on display against Houston, in what arguably ranked as Harvard’s toughest nonconference matchup.

With just over five minutes left on the clock and the Crimson down seven, the freshman missed a jumper from the elbow. He got his own rebound, kicked the ball out to classmate Justin Bassey, and then got the ball back for a three near the left corner.

Thirty seconds later, and after a stop on the other end, Chambers drove the ball inside and kicked it to Aiken in the same spot. Aiken drained the second three and Harvard was within one with just over four minute to play.

After the two teams traded baskets, Aiken held the ball at the top of the key with just over a minute left on the clock. He dribbled the ball between his legs and found a cutting Zena Edosomwan for a layup that put the Crimson up by one. That score would prove to be the go-ahead basket as Harvard won, 57-56.

Aiken finished the game with 21 points—13 alone in the second half on 3-of-4 shooting from deep—to go with three assists, three steals, and three rebounds. 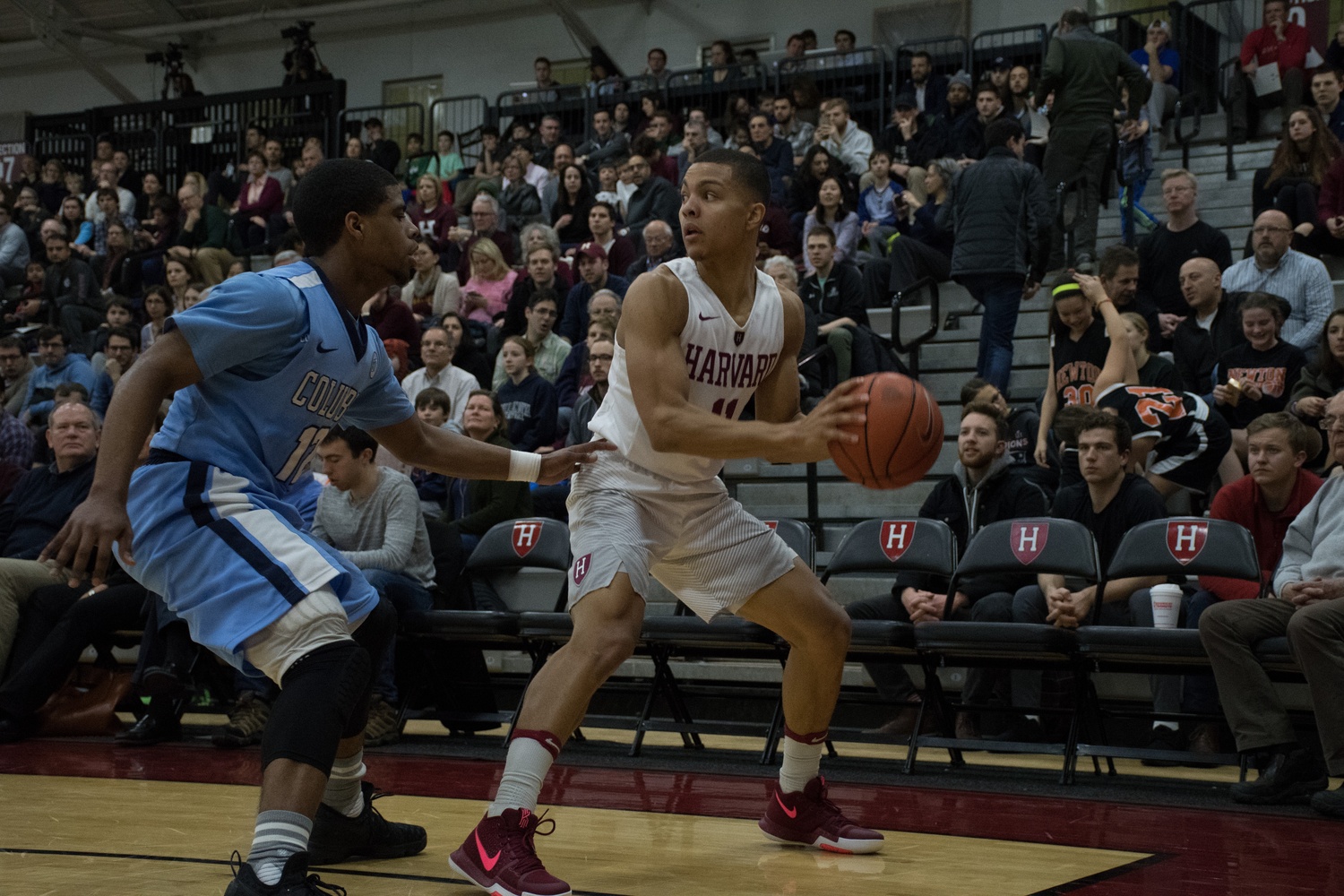 Playing at home against Columbia, freshman guard Bryce Aiken finds himself in a tight spot. By Megan M. Ross

The freshman’s production only continued.

In the Crimson’s next game, Aiken topped his previous performance, putting up 23 points on 7-of-11 shooting from the field and 6-of-9 from three-point range. All told, he would average 17 points per game in the month of December. And Harvard wouldn’t lose a single game.

“Bryce’s offensive ability is changing the game for us,” said Amaker after the game. “He’s done that now for the last two games where his shot-making ability just changes it, and that’s certainly something that we needed and will continue to need.”

The dominance didn’t stop once Ivy League play began, either.

Against Cornell, Aiken took over in clutch minutes once more. With just under a minute left on the clock and the Big Red up by a point, the freshman drove inside and kicked the ball out to Bassey in the corner. The wingman drained the three to put Harvard up by two.

After getting a stop on the other end, Aiken dribbled up the ball and let the shot clock wind down. With just over 10 seconds on the clock and two on the shot clock, the freshman drove inside and took a step back jumper from the elbow. The shot found nothing but twine and sealed the road win. He finished the game with 21 points on 5-of-8 shooting.

“Big-time play by him,” Bassey said. “He’s a savvy point guard, [and] he hit the shot at the end of the game. That’s why we have him and why we trust him with the ball.”

Aiken downed Cornell, but it was against Yale where the freshman always brought his best game.

It started with that away game against the Bulldogs in February. After a 12-point first half, he hushed a rowdy New Haven crowd with a three and the foul to put the Crimson on top, 55-53. Harvard led the rest of the way, as Aiken finished with 27 points, three rebounds, and two assists. It was Yale’s first home loss in over two years.

Then came the matchup against Bulldogs at home. In what went down as a runaway win for the Crimson, Aiken finished with 22 points on 5-of-8 shooting from beyond the arc to go with five assists and three steals.

His best outing, however, came in Harvard’s last game.

Playing for a spot in the championship game of the inaugural Ivy League tournament, Aiken topped his previous performances against Yale. After scoring eight points in the first frame on an afternoon when the Crimson couldn’t find the bottom of the net, the freshman nearly willed Harvard to a win on his own.

Over a period of four minutes midway through the second half, the freshman scored 12 of 15 points for the Crimson. The heroics came from Aiken and Aiken alone—only one of the freshman’s buckets came off an assist.

With 1:14 left on the clock, the Bulldogs’ held the lead at 71-66. With Yale forward Sam Downey switched onto him, Aiken dribbled left through a pick from classmate Seth Towns. He pulled up from deep and connected to put Harvard within two.

The Crimson ultimately fell, but Aiken finished with 20 points in that second half and a career-high 28 overall.

“He’s a creative shot-maker and playmaker, and we needed him to do exactly that,” Amaker said. “I thought he did a tremendous job of putting us in position to have an opportunity to pull it out. We wouldn’t have even been close if he wasn’t able to have some heroic shots and big plays that he made for our team.” 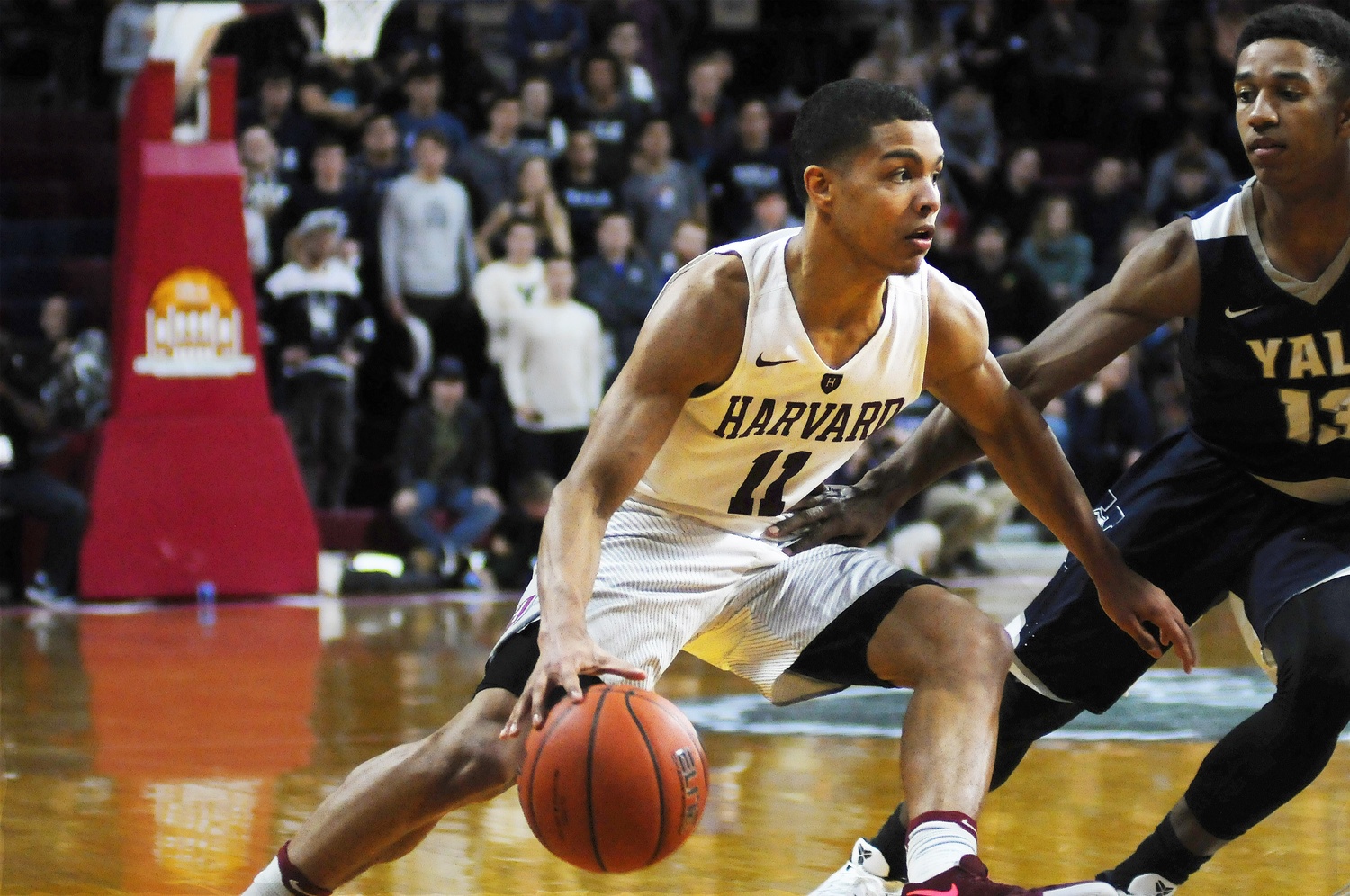 In a playoff matchup against Yale, freshman Bryce Aiken posted his most impressive stat line of the season, finishing with a career-high 28 points. By Derek G. Xiao

On the surface, it might seem that Aiken fills the void left behind by Chambers. After all, the freshman is the only other player in league history to win Ivy League Rookie of the Year honors and receive an All-Ivy first-team selection. The impact of Aiken, however, differs from that of the four-time All-Ivy guard.

Speaking on Chambers’ departure and Aiken’s growing role at the end of the season, Amaker was careful to assign the freshman the “quarterback” role that Chambers held for four years.

“[We’re] certainly not trying to take away from the true nature of his makeup, his DNA,” Amaker said. “We’re not trying to change him. We’re trying to add and grow and develop. But certainly the core of what we have, we’re very pleased with.”