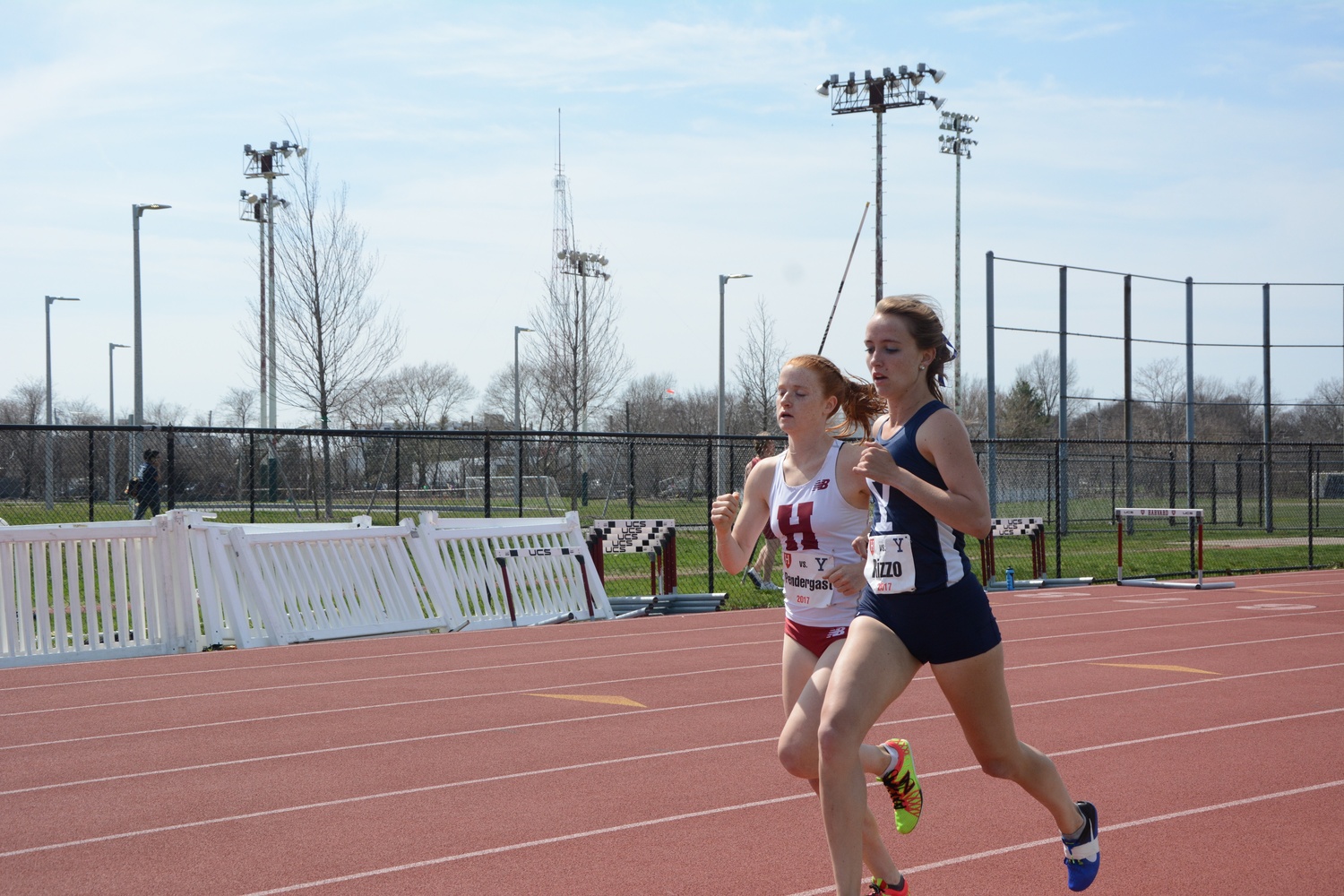 Sophomore Judy Pendergast keeps pace with a Yale opponent at a home meet this spring. Over the summer, the distance runner was one of five Crimson athletes to compete at the NCAA Outdoor Championships. By Amanda M. DiMartini
By Cade Palmer, Crimson Staff Writer

The name Harvard doesn’t exactly evoke thoughts of athletic prowess. But inside track and field circles, that fact may be starting to change.

Over the summer, the Crimson track and field team sent five athletes to the NCAA Outdoor Championships and qualified four for their respective junior national teams, representing the nations of the United States, United Kingdom, Canada, and Germany.

In the U.S. junior national championship meet, sophomores Judy Pendergast and Eliza Rego competed in the 3,000-meter run and 3,000-meter steeplechase, respectively. While Rego placed eighth, Pendergast clocked a 9:49.97 to finish second and qualify for the U.S. team at the Pan America Junior Championships in Lima, Peru. Jacob McLennan was tabbed by Canada to compete in the same meet but in the 400-meter hurdles.

“Being able to represent my country is something I have dreamed about since I was a little kid,” McLennan said. “Moments like these are so special because it gives me the chance to look back at all the work I have put in thus far. This opportunity definitely increases the momentum going into next season.”

Across the pond, two more rising sophomores earned spots on their national teams. Lisa Tertsch of Darmstadt, Germany, earned a national spot with her 10:22.76 time in the 3,000-meter steeplechase earlier this year at the Stanford Cardinal Classic.

In the same race for the men, Will Battershill qualified for the United Kingdom team. At the European U20 Championships held in Grosseto, Italy, Battershill placed third overall in the qualifying round. Though he did not start the final round, his bronze-medal-qualifying time of 9:07.97 would have been the eighth-fastest. That performance was good enough for the sophomore to ensure the selection for his home country.

Earlier in the summer, several of the program’s athletes capped the outdoor season in Eugene, Ore., at the NCAA Outdoor Championships. Among the top programs in the nation, the Crimson emerged with several standout performances. Arriving with Ivy League championships in cross country as well as indoor and outdoor track, Harvard left with five All-American honors and 29th place as a team, the best finish among all colleges in the Northeast region.

The second day of the four-day meet showcased the woman runners, and it was Thomas who took to the blocks first. Racing in the first heat of the day, the Florence, Mass., native clocked an 11.54 time. The finish, good enough seventh in the heat, placed her 22nd overall.

While the junior did not medal, she represented the first female Harvard sprinter even to compete in the event. For her effort, Thomas was given USTFCCCA All-America Honorable Mention honors.

Miller was up next. The senior was no stranger to the national stage—this competition marked her fourth time in as many years.

Miller raced in the third heat of the 400-meter hurdle semifinals to claim the second spot. Miller’s 56.98-second race was the sixth-fastest overall. She finished just behind USC’s Anna Cockrell, who clocked the second-fastest time of the day.

Thomas then took the track to compete in her most prolific event, the 200-meter hurdles. In the event for which she holds the school record—and for a time the fastest time of the season globally—Thomas placed first in the third heat and fifth on the day. With her 22.821 time, the sophomore came out just .001 seconds of the second-place finisher, Aaliyah Brown of Texas A&M.

“The finish of that race was important because it would determine my lane for the finals, and my intentions were to save some energy in prelims for the final,” Thomas said. “But towards the end, it was too close for comfort, so I had to grind for those last ten meters to get the first-place spot. It was close, so I wasn’t sure. I was excited to see that I was the heat winner.”

Uwaifo was the lone Crimson participant on the third day of competition. The triple jumper leapt 15.65 meters on his second jump to secure the 15th position, a career-high place at the national meet.

For his efforts, Uwaifo landed on the USTFCCCA All-American second team, becoming only the second male athlete in Harvard history to earn that distinction in the event.

The final day of competition began with another seasoned veteran for the Crimson. Okwelgou competed in the discus throw. The outgoing senior finished the event 23rd nationally with a 43.85-meter toss. She was awarded USTFCCCA All-America Honorable Mention for her effort, the final of a prolific career as a Harvard thrower.

Miller, another giant for the program, finished up in the 400-meter hurdle finals soon after. Competing in her second-ever finals, and first since 2015, Miller clocked a time of 56.61 seconds. The time secured sixth place and USTFCCAA First Team All-American honors.

Not 15 minutes after, Thomas was competing for her own national title. This race also marked Thomas’ second national finals in as many years. In the 2016 season, the then-freshman placed third.

This year, she achieved the same feat with a 22.61 race, just .01 seconds above her school record. Racking up USTFCCCA First Team All-America honors, the sophomore tied her effort last year for the best finish of any Crimson student-athlete in a sprint event. She continued an impressive career that looks to resume for Harvard during the upcoming season.

With Thomas and Miller combining to gain the team’s nine points for the meet, Harvard placed 29th as a team, the highest of any Northeast region school.

“It’s exciting and a great feeling to know that I am doing something that nobody has done before,” Thomas said. “But I also hope it puts Harvard on the map and lets everyone know that this program can be academically excellent as well as athletically. I want people to turn on the TV and see that it is possible for them—and even for my teammates to understand that this is the standard that the Harvard program is working towards.”