Football Picked to Finish Atop Ivy League in Poll 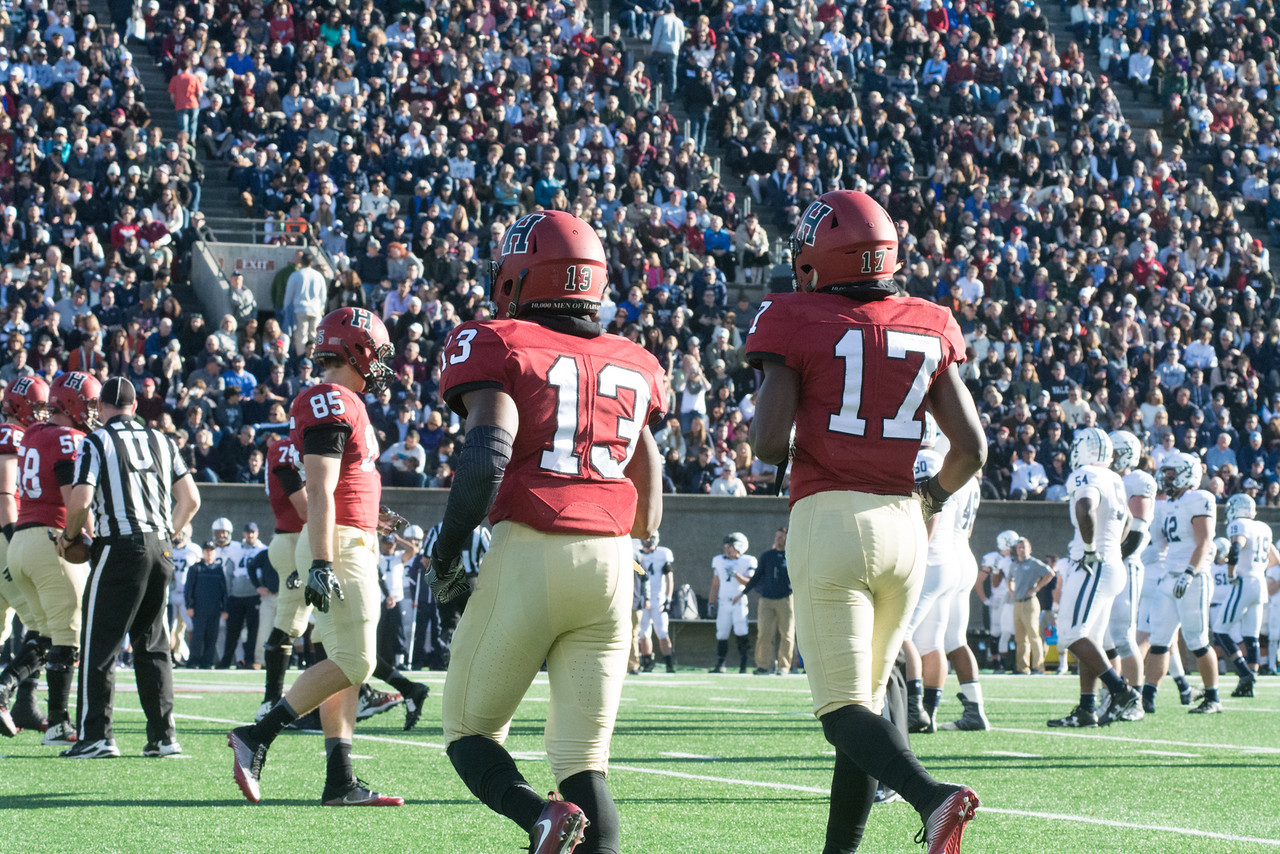 Picked to finish atop the Ivy League along with rival Princeton, Harvard football enters the 2017 season with plenty of questions, but also plenty of potential. After a devastating loss to Yale in the last game of the season last year, Harvard would miss out on a share of the Ivy League title. By Megan M. Ross
By Sam Danello, Crimson Staff Writer

Two weeks before the start of the season, a single question looms for Harvard football: Can the team shake off the dust from last season—which ended with a disastrous two-game losing streak—and claim a fourth Ivy League title in five years?

Late this summer, Ancient Eight pundits combined to produce a preseason poll. Together, they delivered a resounding answer for the Crimson: no one knows.

For just the third time in Ivy League history, two teams tied in the annual projection. Princeton and Harvard both received 120 points, although the Tigers received slightly more first-place votes (six) than the Crimson (five).

The deadlock leaves the Ancient Eight in a state of uncertainty heading into competition. Further complicating the picture is the presence of Penn, which placed a closed third with 110 points and five first-place votes. Yale landed in a more distant fourth.

This year marks the 144th season of the Crimson football. The past decade has brought especially intense pleasures. From 2014 to 2016, Harvard claimed three straight championships. And over the last 16 years, the Crimson set a conference record by earning at least seven wins each season.

Last season disrupted this dominance, as the Bulldogs defeated Harvard in the final game of the season. This outcome not only shattered a nine-year win streak in the rivalry but also butted the Crimson out of first place. Princeton and the Quakers shared the banner.

In 2017, Harvard returns over half its starters from last year. Among this cohort is top passer Joe Viviano, top rusher Semar Smith, and top tackler Luke Hutton. All three are seniors. This combination pairs with ferocious cornerbacks and safeties.

"Defensively, I think our back end will be a veteran group,” said coach Tim Murphy during a conference call. “We're really excited about our secondary.”

This group, however, faces a tough string of challenges in the year ahead. Last season, the Tigers started the talented tandem of Chad Kanoff and John Lovett at quarterback. A traditional passer, Kanoff recorded two interceptions in his final eight games and landed on the All-Ivy second team. Meanwhile, Kanoff—who is a do-it-all athlete—made history by racking up 31 total scores, more than five teams overall. For his efforts, he earned an All-American nod.

Kanoff and Lovett return as seniors now. And they come back with the mission of claiming an outright championship—something no team has accomplished since 2014.

In order to do so, Princeton must get past two-time champion Penn. Although media members projected the Quakers as a third-place finisher, this designation may not mean much—in 2015 and 2016, Penn won the title despite not finishing at the top of the preseason poll.

There are internal reasons, too, why the Crimson will face a tough climb to the championship. This offseason, Harvard lost a number of key seniors. Gone is tight end Anthony Firkser, who led all pass-catchers last year with seven touchdowns. The Jets brought him to training camp this year. Joining him in the NFL is Max Rich, a 6’7” offensive lineman who anchored the Crimson offensive line last year. Harvard will miss these stars sorely.

Still, the start of the season will bring lesser competition, as the Crimson faces several bottom-feeders before battling the Killer P’s. In the preseason poll, Dartmouth and Brown earned fifth and sixth, respectively. Columbia and Cornell rounded out the league with 38 and 36 points.

Previously, Harvard has beaten up on this lesser competition. In the last three years, the team has not lost once to these four programs.

And anyway, these early predictions have limited value. In the past 40 polls, the media has correctly predicted just 12 champions.

“The big thing is that we have experience this year,” captain Luke Hutton said. “We didn’t have it last year. Experience is your biggest ally. When you have guys who have played 10 games coming back, it’s huge for how well you’re going to play.”