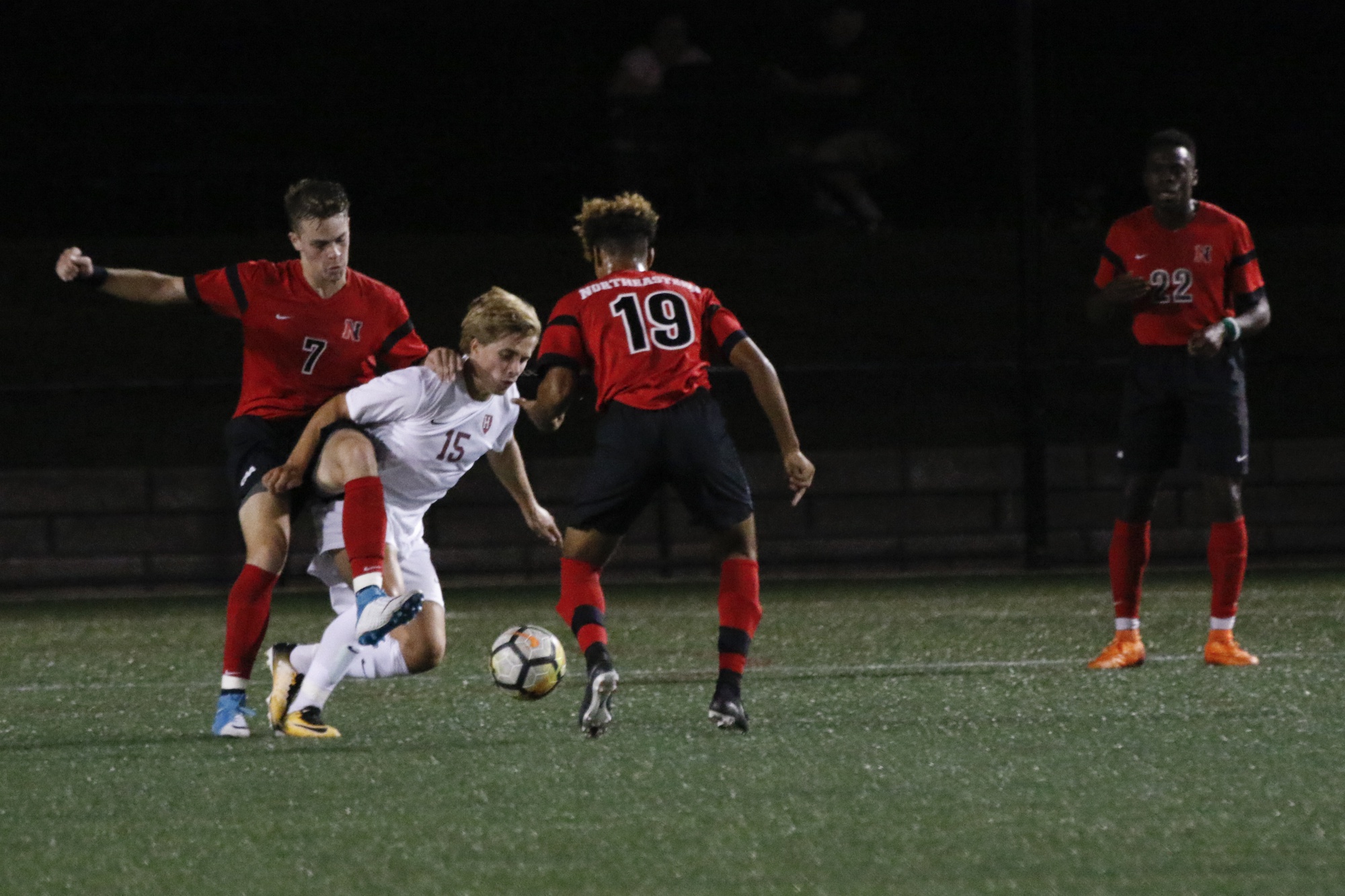 Freshman midfielder Cornelius Bencsik challenges for the ball in previous action against Northeastern. The Norwegian rookie made his first career start for the Crimson. By Timothy R. O'Meara
By Katherine H. Scott, Crimson Staff Writer

The Harvard men’s soccer team was unable to notch another win on Saturday night, falling to Boston University. The Terriers (1-5-0) avenged last season’s loss against the Crimson (1-3-1) and got its first win of the season in a close 1-0 game.

“It was obviously not the result that we wanted,” senior midfielder Christian Sady said. “But I thought overall we defended really well, aside from that one set piece that was just kind of a lapse in concentration and that’s easy to fix for us.”

Both teams seemed evenly matched from the starting whistle, with just four combined shots taken in the entire first half. Harvard’s offense flowed and the team was able to maintain possession in the attacking third, but nevertheless the team struggled the first half to earn clear shots on goal.

The team’s best and only attempt at goal in the first half came in the 13th minute when co-captain defender Eric Gylling took a screamer from 35 yards out, which unluckily hit the crossbar.

“I thought we kept good possession,” Sady said. “I would’ve liked to see us be a little more dangerous in the final third, but…I’m confident that moving forward we’ll be great.”

Though the offense was struggling to find opportunities to take shots, the defense remained steady and prevented the Terriers from getting many looks. The game also saw the debut in between the posts of Harvard freshman Matt Freese. The Crimson netminder saved two shots from BU’s sophomore forward Matt McDonnell and junior midfielder T.J. Butzke, as well as one from sophomore midfielder Satchel Cortet.

In the 44th minute, however, a Terriers free kick was curled into the Crimson’s penalty box. The ball was picked up by Terrier senior defender Adam Sheikali, who placed the ball just inside the left post to give his team the 1-0 lead going into the half.

“Matt Freese did great,” Gylling said. “I don’t think it’s the easiest thing to come in as a keeper and start a full game, especially against a crosstown rival, but he did really well.”

It was in the second half that the Crimson offense came alive and found a way to get past the BU defense. The Terriers made the first attempt at goal, but Harvard quickly responded with looks of its own.

Ivy League Rookie of the Week midfielder/forward Paolo Belloni-Urso took three of the five shots that Harvard had in the second half. One of the team’s best chances at an equalizer came in the middle of the second half when Belloni-Urso fed a ball to freshman midfielder Cornelius Bencsik at the top of BU’s box, but Bencsik’s shot went wide.

Though the clock was winding down, the Crimson offense upped the pressure on the Terriers defense. Ten minutes after Bencsik’s shot, and with just under two minutes left in regulation, the team had two more chances to score and send the game into overtime. After a foul on BU, Belloni-Urso sent a long free kick over the wall and right on target for goal, but BU’s William Bonnelyche managed to punch it away.

Bonnelyche was not off the hook just yet, though, as Sady was right there for a quick rebound. The Terriers goalie was quick on his toes and saved Sady’s shot as well, shutting Harvard out and sealing the win for his team.

While the offense was picking up its rhythm, Harvard’s defense remained just as strong as it was in the first half. Freese saved BU’s early shot in the half, and the back line stopped the Terriers offense from making any more attempts on goal in the last 45 minutes of the game.

Despite the loss, the Crimson gave a strong performance that can serve as a base upon which to build for the rest of the season.

“We had a few guys who weren’t healthy for the game so I think once they get back in the lineup that could help us with our attack going forward,” Gylling said. “We’re also talking about keeping our outside mids wider and looking for more productivity from the forwards.”