Football Rolls Over Brown, 45-28, Thanks to Fearsome Defense 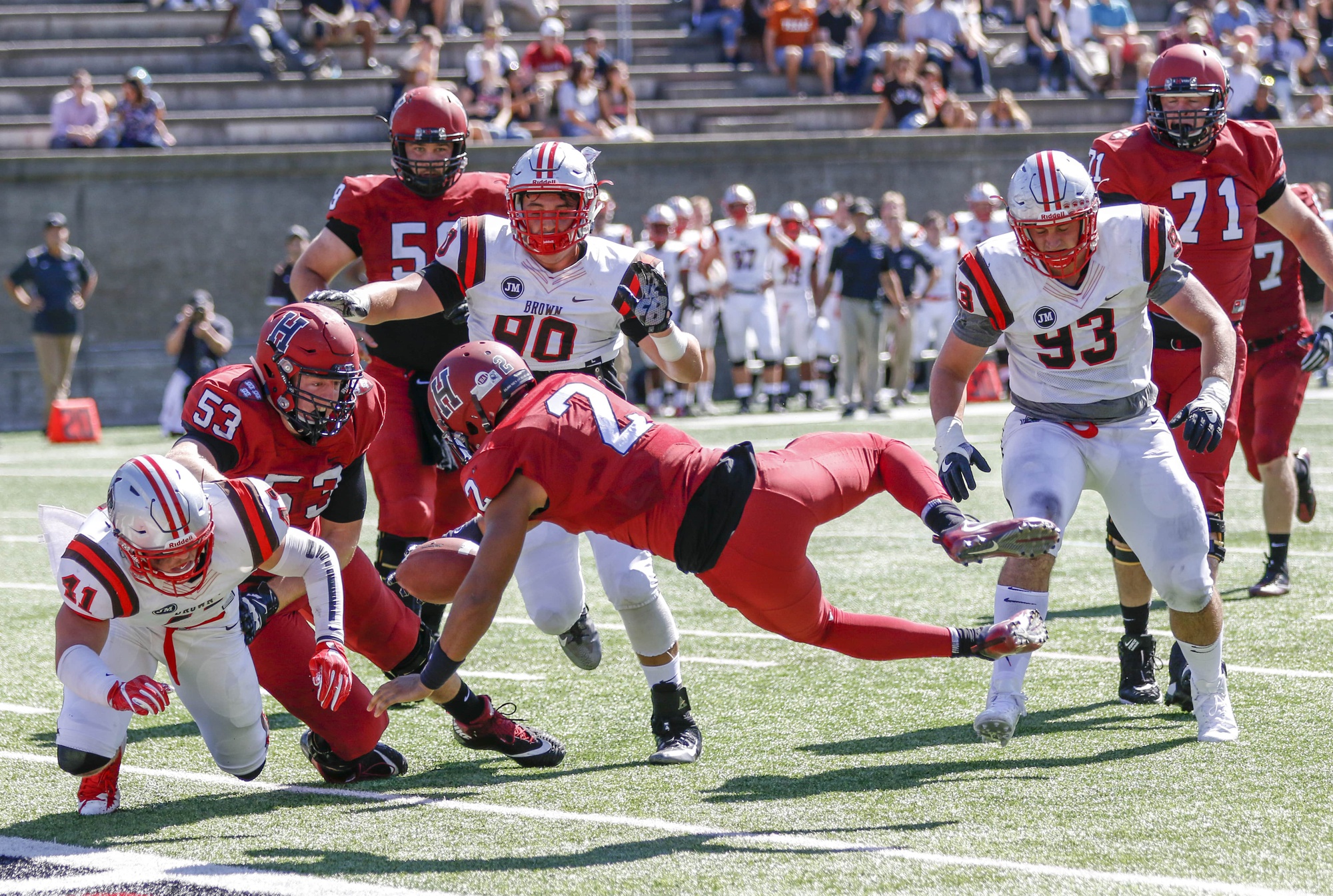 Sophomore wide receiver Lavance Northington dives across the goal line to give Harvard a 21-2 lead in the second quarter against Brown. By Timothy R. O'Meara
By Cade Palmer, Crimson Staff Writer

This Saturday, the Harvard defense was down a man, but a 12th was on the back of its helmets. A week after a major cervical injury to cornerback Ben Abercrombie, the Crimson pledged to honor the freshman with an inspired performance.

Harvard (1-1, 1-0 Ivy) made good on its word, shutting out Brown’s offense in the first three quarters en route to a 45-28 rout. The win represented the Crimson’s 17th consecutive home-opener victory and seventh in a row against the Bears.

“With Ben going down on Saturday, the emotions were definitely a lot higher,” said senior safety Tanner Lee, who shares Abercrombie’s Alabama roots. “There’s a lot more to play for, especially for someone that’s so close to me…. The season is about winning games, but it’s also about putting a championship ring on Ben’s finger. That’s what we’re playing for.”

In the first half, the Harvard defense proved extraordinary. Discounting a Crimson penalty in the first quarter, the Bears (1-1, 0-1) didn’t earn a first down until their seventh drive of the day, or two minutes into the second quarter. Brown totaled exactly nine rushing yards and 67 passing yards before intermission. By then, the hosts led 21-2. 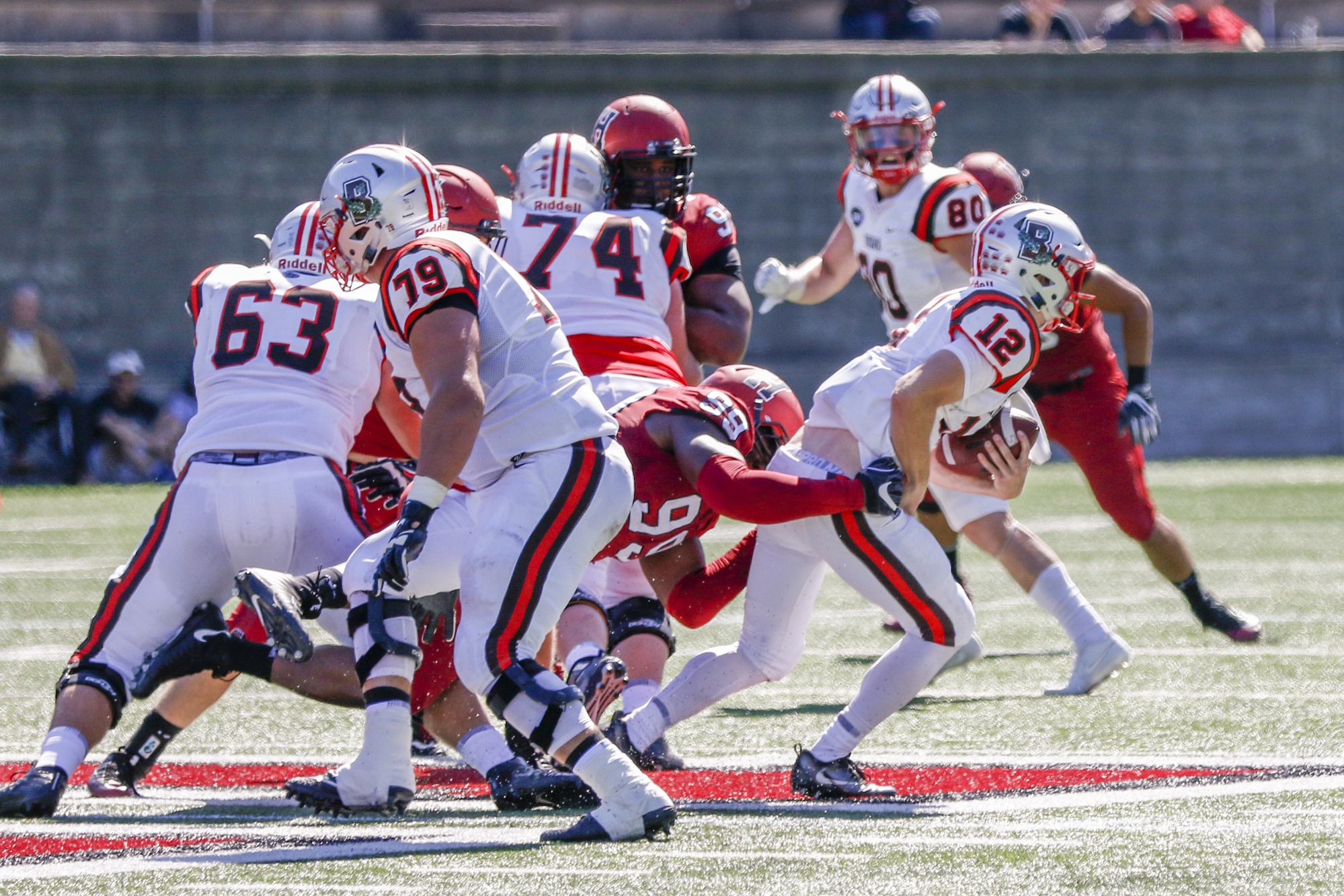 Quarterback Jake Smith made his collegiate debut, becoming the first Harvard freshman to start under center since Ryan Fitzpatrick. Having set a Michigan state record for touchdowns, the rookie showed a light touch on several passes.

The offense stalled, however. After six straight plays inside Harvard’s 10 that went for a loss, the Crimson swapped Smith for Joe Viviano. The fifth-year senior, who started last week, performed immediately.

Starting on Harvard’s two, Viviano delivered a strike, and then another, and then another. On that drive, the quarterback went five-for-five for 76 yards. The possession culminated when sophomore wide receiver Lavance Northington took a wildcat snap and found the end zone.

By that point, though, the Crimson defense had already dealt a backbreaking blow. With 2:10 left in the first quarter, playcaller Nicholas Duncan took a three-step drop and spotted a double-slant route. So did safety Lee. Dropping down to shadow the inside receiver, Lee anticipated the pass and sped toward the end zone. 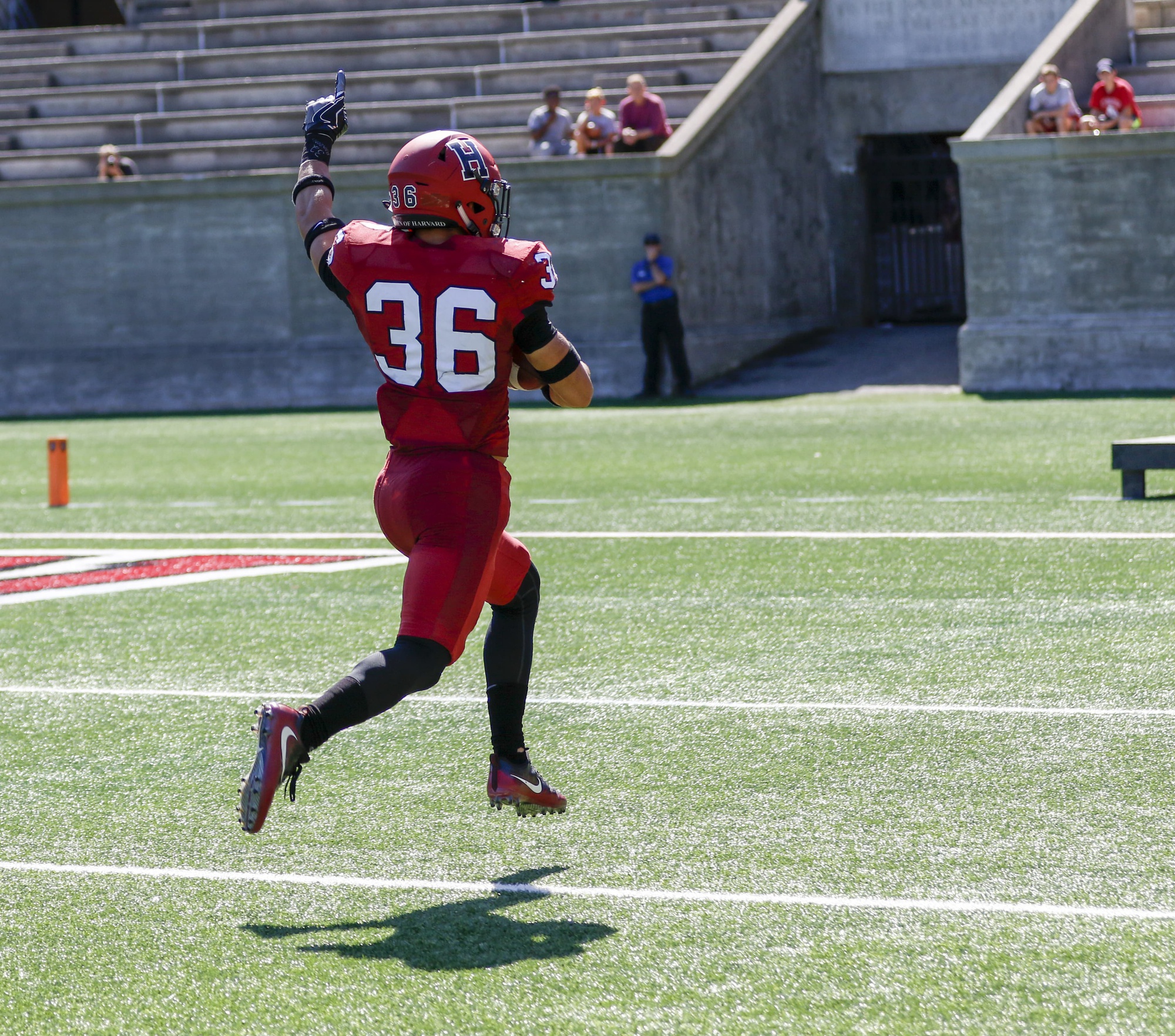 Safety Tanner Lee skips into the end zone after hauling in a first-half interception. The senior spearheaded a defense that collected three picks. By Timothy R. O'Meara

Harvard truly opened the rout in the second half. After receiving the opening kickoff, the Crimson marched down the field thanks to a 37-yard completion to junior receiver Justice Shelton-Mosley. Junior running back Charlie Booker III took care of business, breaking several tackles for a 27-yard score.

A field goal by sophomore Jake McIntyre extended Harvard’s lead to 29. Then the Bears returned the ball promptly. On a first down, junior linebacker Charlie Walker undercut an out route. He returned the ball to the 18, and freshman running back Aaron Shampklin punched in a score. Harvard 38, Brown 2.

All Harvard’s success started with dominant defense in the opening minutes. In the first quarter, Brown accumulated 33 yards over six drives. In fact, the two defenses tallied more points (nine) than the two offenses (seven), as the Crimson led, 14-2. 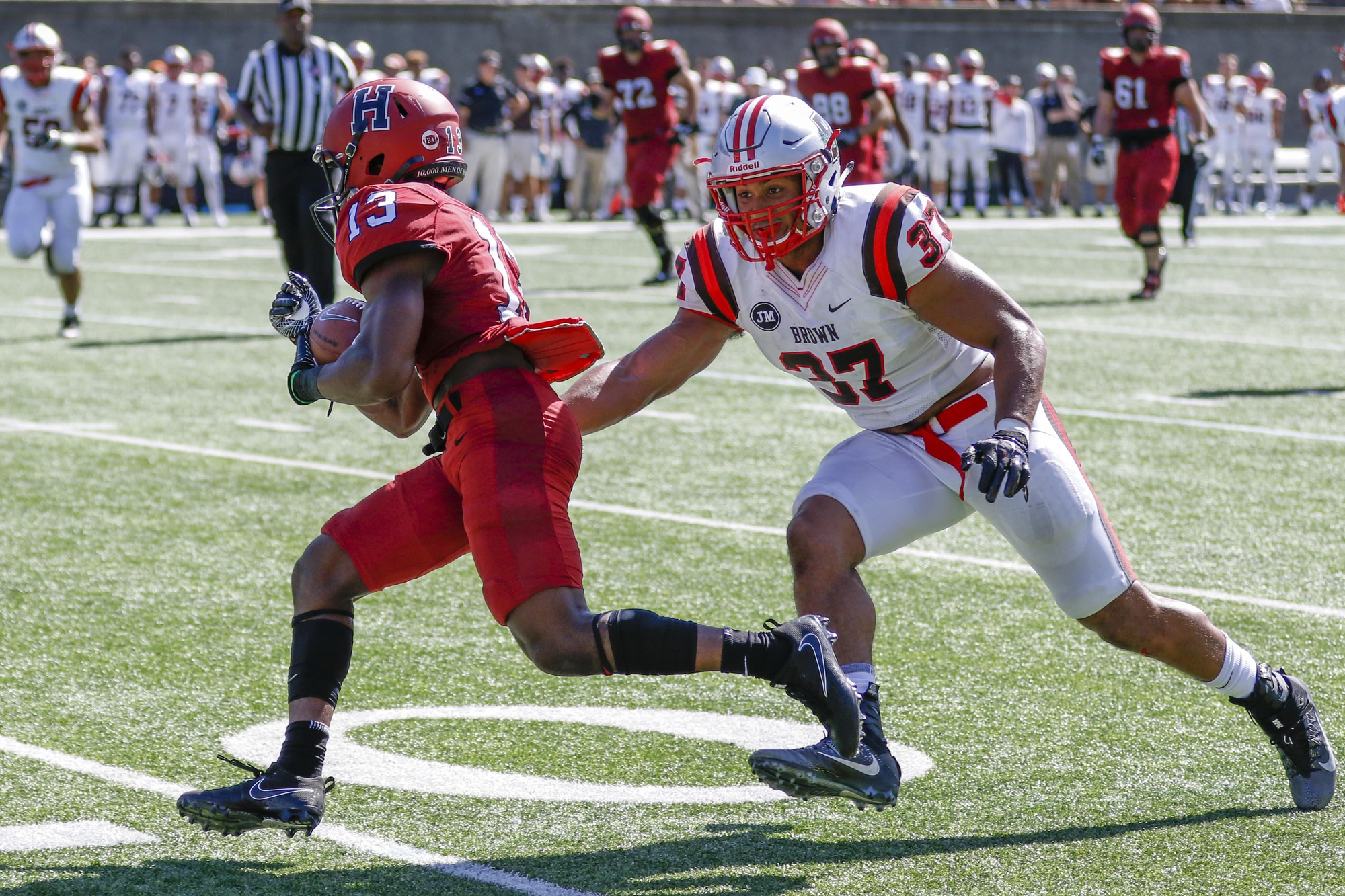 Booker owned the only offensive score. Smith set up the touchdown with a 31-yard completion to sophomore wide receiver Adam Scott. From there, Booker took a handoff, shook a tackle, and walked into the end zone for a 16-yard score.

The early scoreline might have been more lopsided if not for Bears punter Ryan Kopec. The junior landed several kicks inside the 10.

In the second quarter, Brown introduced some drama. Senior defensive end Richard Jarvis—last week’s Ivy League Player of the Week—helped stonewall Booker and punched out the ball. But on Brown’s first play, sophomore linebacker Joey Goodman came up with a diving interception.

“I think we had [momentum] a couple of times,” Brown coach Phil Estes said. “We had the fumble, and then we turned around and threw a pick on the next play. Whenever the defense creates some momentum for us, offensively we lost it.”

By the fourth quarter, Brown was down 36, but someone forgot to tell quarterback Thomas Linta. The senior, who replaced Duncan, led the Bears on four consecutive touchdown drives. He racked up 232 passing yards in the final quarter alone.

“You’ve got to attack the game every single series you can,” Linta said. “It doesn’t matter what the score is. I was looking at it [as] 0-0. I was just out there trying to play and score touchdowns every single drive.”

That effort fell short, however, as the Crimson held on for the three-score win. The game capped a tumultuous week following Abercrombie’s injury.

“We know that there’s only so much that we can control.” Harvard coach Tim Murphy said. “It speaks volumes of the characters of our kids—just the way they played today. They gave it everything they had. It was just a tremendous, across-the-board team effort.”