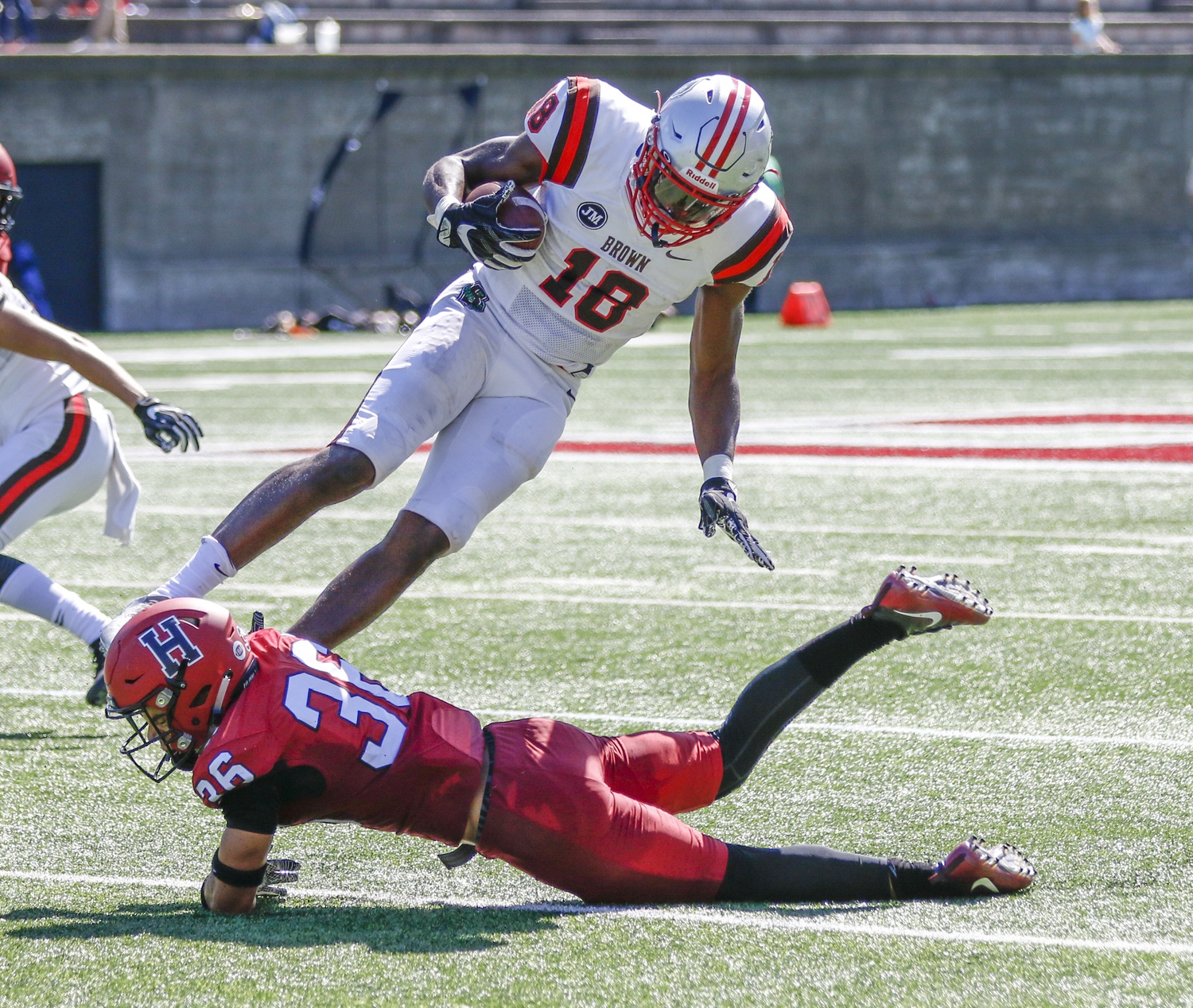 Safety Tanner Lee lunges for one of his five tackles. The senior also grabbed a pick-six to put Harvard up 21-2. By Timothy R. O'Meara
By Sam Danello

After 45 minutes of action, Harvard led 38-2. Thanks to sloppy defense and several onside kicks, the Bears (1-1, 0-1) closed the margin for a 45-28 finale. But only gambling addicts were paying attention to the final score.

For the Crimson, the blowout result came as a relief and a revelation. A relief, because Harvard players had undergone a difficult week following a spinal injury to freshman Ben Abercrombie. A revelation, because the victory over the Bears came after a disheartening loss to Rhode Island.

One is Abercrombie. On Oct. 16, the freshman suffered paralysis in a game at Rhode Island. Medics rushed him to a hospital, and his parents flew up.

Abercrombie’s prognosis remains uncertain. Yesterday, a local newspaper reported the hope that Abercrombie will be able to breathe on his own this week. No one knows what long-term prospects Abercrombie faces.

The other defensive back from Alabama is Tanner Lee. Last year, he led the Crimson with four interceptions. Given the similarities between Lee and Abercrombie, it’s easy to imagine why the freshman’s injury might affect the senior personally.

On Saturday, with emotions swirling, Lee played perhaps the game of his career. The high point came the first quarter, when Lee anticipated a double-slant route. He grabbed the pass and sprinted 39 yards to the end zone.

In the first half, Lee was a major reason why Brown converted one of 10 third downs. On the Bears’ second possession, Lee defended a third-and-18 by standing up a receiver after 17 yards. With 4:30 left in the second quarter, the safety snuffed out another third down by busting a screen pass.

Lee was only part of a stifling effort. Captain Luke Hutton racked up eight tackles. Afterwards, he attributed the intensity to Abercrombie’s injury.

“We don’t get scholarships, Hutton said. “That’s not our incentive. Our incentive is that we love to play the game. We love the guys in the room. Anytime something happens to someone, because of that love that we have for one another, you’re going to come out with a lot of emotion.”

Ryan Fitzpatrick, now with the Tampa Bay Buccaneers, was the last freshman quarterback to start for the Crimson. Sixteen years passed before coach Tim Murphy felt confident enough to trust Jake Smith, another rookie, with the keys to the offense.

Against the Bears, Smith displayed a soft teach and hit targets in the hands. He finished five-of-seven for 72 yards.

“The bottom line is that Jake had performed the best as quarterback in practice over the last two weeks,” Murphy said. “If you look at how relatively sluggish we’ve been, by high Harvard standards, over the past three or four games, we felt like we needed a jolt.”

Five minutes into the second quarter, however, Murphy had seen enough. He inserted fifth-year senior Joe Viviano, the expected starter. In the season opener, Viviano had missed deep balls and taken five sacks. Something must have snapped, because at Harvard Stadium, he was a man possessed.

Viviano took over on the Crimson’s two-yard line. Immediately, he zipped an 11-yard pass to senior tight end Jake Barann. Then came darts to junior wide receivers Henry Taylor (31 yards, down the sideline) and Adam Scott (27 yards, across the field).

All told, the drive spanned 98 yards and four minutes. Viviano finished the afternoon with a red-hot line, completing 11 of 13 throws for 150 yards.

“It was just my gut decision that, based upon the first couple series, Joe would give us the best opportunity to maximize our chance of winning this game,” Murphy said. “It’s hard to quantify, but [the competition] has made him a better quarterback.”

Junior running back Charlie Booker III was so good Saturday that his lone mistake occurred because no one could tackle him.

Four minutes before halftime, Booker rumbled into a scrum of defenders. The Bears wrapped him up but couldn’t topple him. After several seconds of grappling, senior defensive end Richard Jarvis ripped out the ball.

On the afternoon, Booker carried the ball 13 times for 77 yards and two touchdowns. Last week, he scorched the Rams for 139 yards on 13 rushes.

“I’m just reading everything, doing what I feel like I’m supposed to do,” Booker said. “It’s mainly my teammates carrying me through there.”

Absent from this list is senior Semar Smith, who is out for the season after a practice injury. He was slated for foot surgery last week.