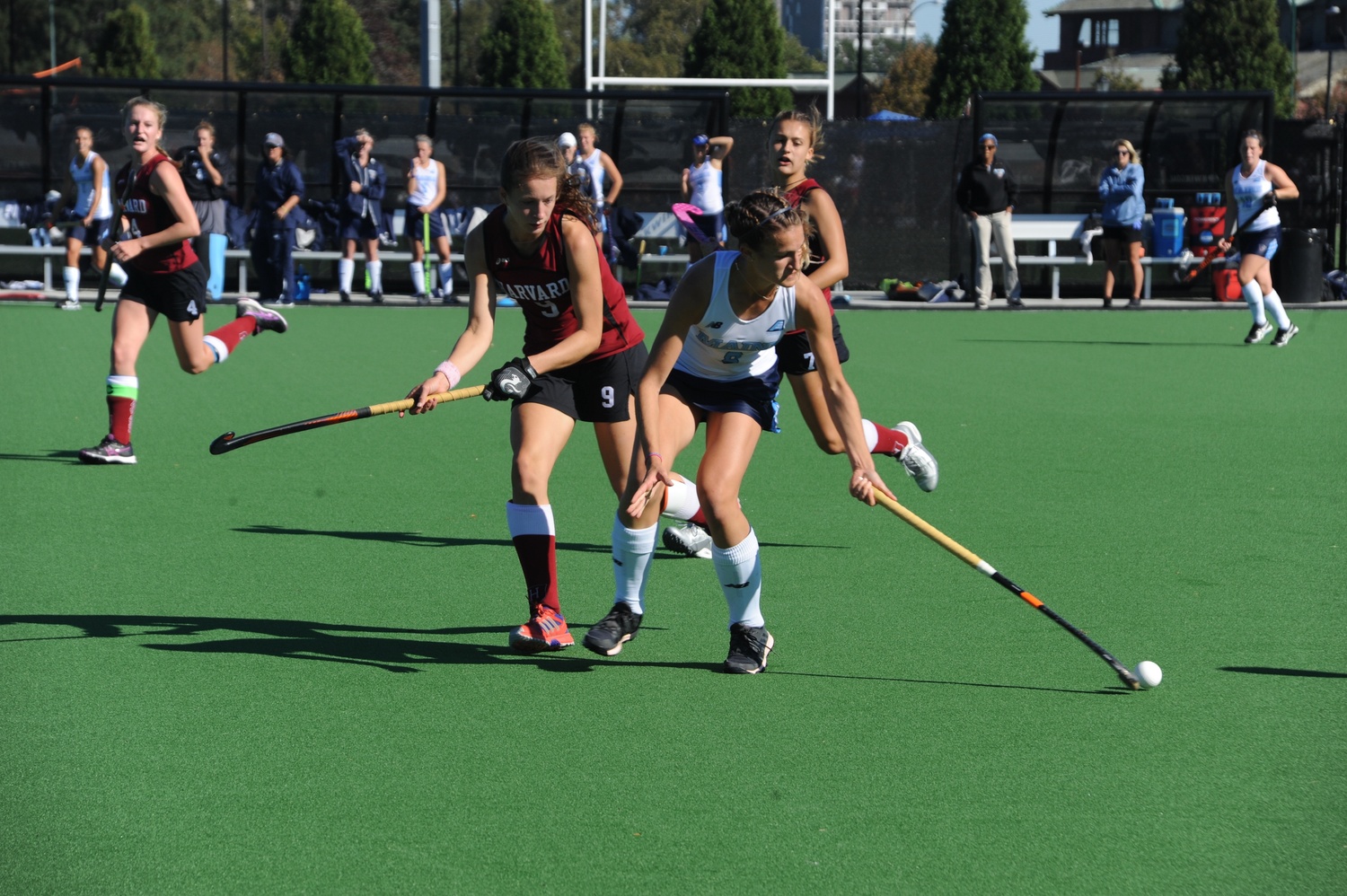 Junior back Olivia Allin and her Harvard teammates came back from California with a 2-1 record after going toe-to-toe with some of the country's premier teams. By Matthew W DeShaw
By Sean B. Chanicka, Crimson Staff Writer

After capturing its first outright Ivy League title since 1990 last season, the No. 20 Harvard field hockey team entered 2017 with high hopes. Its new campaign kicked off this weekend as the Crimson battled sweltering heat and got the best of two of its three opponents in California.

“The heat was definitely something we didn’t expect, but we were ready,” sophomore midfielder Bente van Vlijmen said. “Our staff was very prepared. We were hydrated and there were wet towels everywhere, but we still had to push and it was tough. But after a while we got into the game and the heat didn't bother us much until after the game had ended.”

The Crimson (2-1) opened its weekend slate by beating UC Davis (0-3) on Friday and No. 25 University of the Pacific (1-2) on Saturday. Harvard closed the weekend by facing off with its toughest opponent, No. 13 Stanford. In a close contest, the team eventually dropped its first game of the season to the Cardinal (3-2) in a shootout.

In the team’s toughest matchup of the weekend, Harvard conceded the first goal of the contest to the hosts, as senior midfielder Sarah Helgeson tipped in a cross in the 47th minute. Stanford sophomore goalkeeper Kelsey Bing managed to stop many of the Crimson’s early efforts, but the team was finally able to break through in the 70th minute.

After earning a penalty corner in the final minute, van Vlijmen fired the initial shot, which senior midfielder Hannah Wellington tipped just inside the net for the score. Neither team managed to break through in overtime, sending the game into a shootout which the Crimson eventually dropped 3-2 to the Cardinal.

“After the game, we held our heads high” senior goalkeeper Olivia Startup said. “We thought we performed really well because we competed with one of the top teams in the country. We thought it was a great testament to how strong Harvard field hockey has become.”

On Saturday, the Crimson rode a strong defensive performance for the second straight day to secure the victory. Trailing 1-0, freshman forward Mimi Tarrant continued her strong start to the season, scoring 15 minutes in to even the score. Minutes later, sophomore midfielder Maddie Earle scored following a scramble in front of the net.

Freshman back Hannah Pearce doubled the lead for the Crimson and pushed it to three in the 60th minute. The goals were Pearce’s first two of her collegiate career. However, the Tigers wouldn’t be denied, as the hosts scored two goals in quick succession to close the gap to one.

Van Vlijmen put to rest any hopes of a comeback, however, by scoring in the 69th minute. The goal was her second in as many days to start the season.

“We were pretty confident when we first started the game” van Vlijmen said. “We were really good at finding each other on the field and once we get into a flow, we feel as though we’re unstoppable. I feel as though that really showed through the first two games”.

Much of the Crimson’s success in 2016 came from strong defensive efforts, and the team’s defensive ability continued into its first matchup of this season against UC Davis. Harvard outshot its hosts, 19-0, accumulating 12 shots on goal.

In the second minute of the game, the Crimson scored its first goal as junior forward Kathleen Young found the back of the net. Just ten minutes later, Harvard saw its lead double. In the 22nd minute, senior midfielder Ellie Cookson saw her shot get deflected but Tarrant was able to secure the rebound and score her first career collegiate goal.

In the second half, the Crimson saw its leading scorer from last season—van Vlijmen—score the game’s third and final goal off of a penalty corner with 14:14 left to play. With the victory, Harvard improved to 4-2 in season opening contests under coach Tjerk van Herwaarden and 29-13-2 since 1974.

“I think one of our greatest strengths is that we have depth across the board” Startup said. “We’re a team where everyone has a chance to play and it really takes the entire team to secure these wins. We have a lot of great individuals but we know we’re strongest as a team.”

—Staff writer Sean B. Chanicka can be reached at sean.chanicka@thecrimson.com.