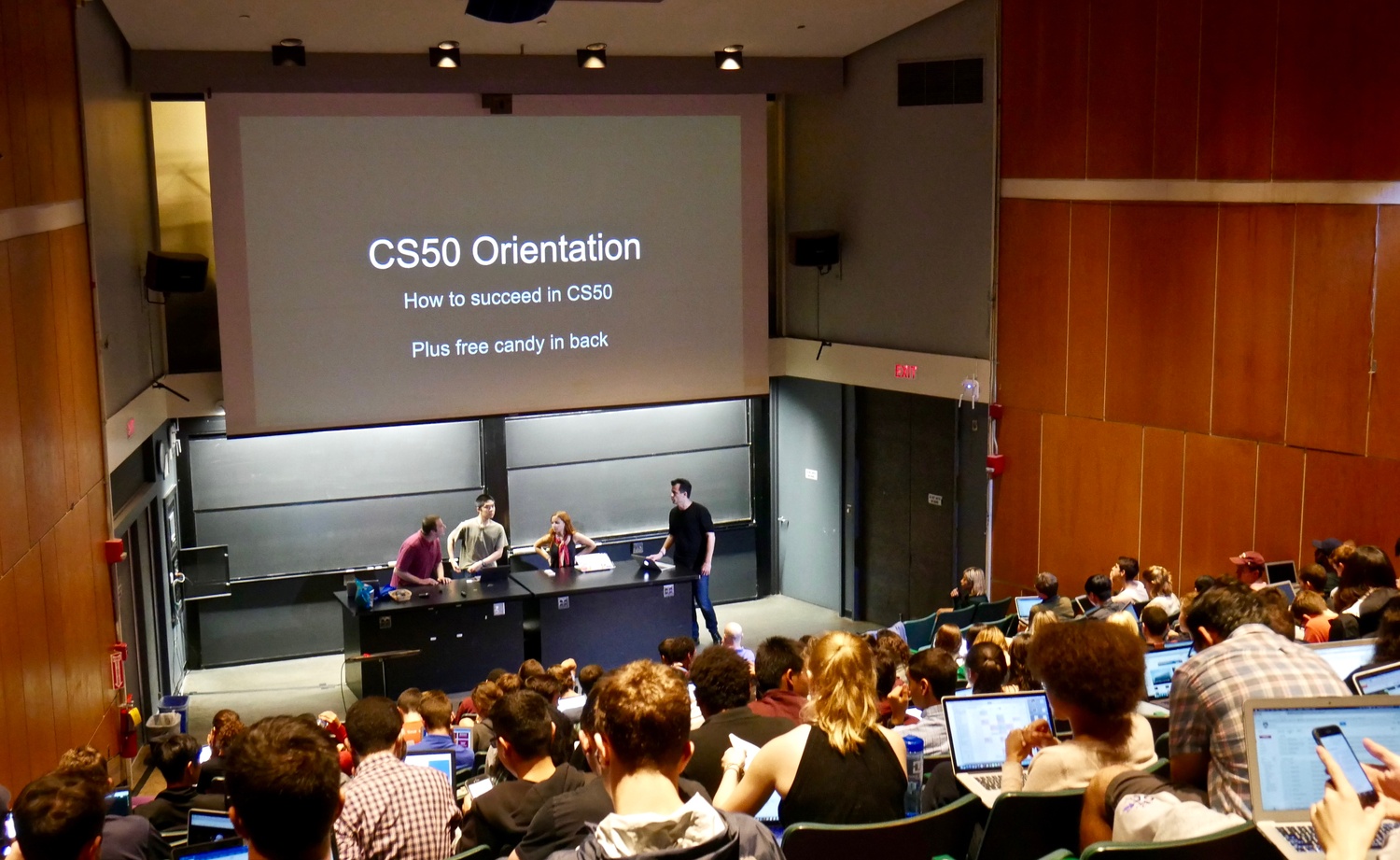 CS50 held an orientation this afternoon in the Science Center for students taking the course. By Amy Y. Li
By Hannah Natanson, Crimson Staff Writer

After a flood of cheating cases roiled Computer Science 50: “Introduction to Computer Science I” last year, Dean of Undergraduate Education Jay M. Harris implored students in the course not to cheat on assignments at an orientation session Wednesday night.

Course head David J. Malan ’99 introduced Harris as a “surprise visitor” to scattered applause and muttering among the 300-odd attendees. The dean spoke for roughly 20 minutes near the end of the session, repeatedly and bluntly warning against cheating. At one point, he asked the entire room to read CS50’s roughly 1,500-word academic honesty policy—slowly and silently, just to themselves.

“No one should leave this room not understanding 100 percent what it is that you may and may not do in this course,” Harris said, adding that cheating is “boneheaded.”

The unusual presentation follows a cheating scandal in the course that stretched the Honor Council—the body that enforces Harvard’s Honor Code—to its limits. Last year, 60 CS50 enrollees appeared before the Council to face charges of academic dishonesty. Wednesday’s orientation session is one of several changes Malan made to the course this semester, though he has said his decision to update CS50 is “unrelated” to the high levels of cheating last year.

Earlier in the session, held in Harvard’s Science Center, Malan walked students through the course schedule, expectations, and resources. Just before introducing Harris, Malan briefly reviewed the course’s academic honesty guidelines—which he summarized as “be reasonable.”

Malan also explained the software CS50 uses to check for academic dishonesty. First, a computer program compares current student problem sets against all problem sets ever submitted to the class to find and flag similarities, Malan said. After that, course staffers examine the flagged cases to determine which are genuine.

The software made more than five million comparisons and identified roughly 200 matches last semester, Malan said. Course staff, including Malan himself, eventually whittled that number down to the more than 60 individual cases he reported to the Honor Council.

“That’s ultimately what got referred to the Honor Council,” Malan said—the only reference he made to last semester’s widespread cheating throughout the hour-long meeting.

“Malan mentioned it rather obliquely, but there are a number of students right now who are not here at Harvard College because they cut enough corners [to] actually have been asked to leave the College for a year in many cases,” he said after taking the stage.

Harris urged students to think through the situation “rationally” and reflect that cheating on a problem set to get a slightly better grade in the short term will “make your life miserable” later on. He added that in his mind students increasingly treat class academic guidelines much like the terms and conditions “for some app.”

“What I’m going to ask you to do right now is to actually read the policy for this course in its entirety, and then we’re going to take a few minutes to ask, is there anything you truly do not understand?” Harris said.

Harris then nodded to Malan, who pulled up the CS50 academic policy page on the projector at the front of the lecture hall. For the next three minutes, Malan scrolled slowly through the guidelines while students watched the screen in total silence, and Harris watched the students.

He spoke up the minute attendees finished reading.

“Is there anything here that you find unclear?” he asked. Hands went up across the lecture hall.

Malan spent the last five minutes of the orientation session fielding questions from students confused about the course’s collaboration policy and whether or not CS50 enrollees are allowed to use code found online. He told them never to Google solutions, and never to borrow a friend’s work.

After the session ended, at least two dozen students lined up in front of the course staff at the front of the lecture hall to keep asking questions.

Malan declined an in-person request for an interview Wednesday night. Neither he nor Harris responded to an emailed list of questions about the event Wednesday.