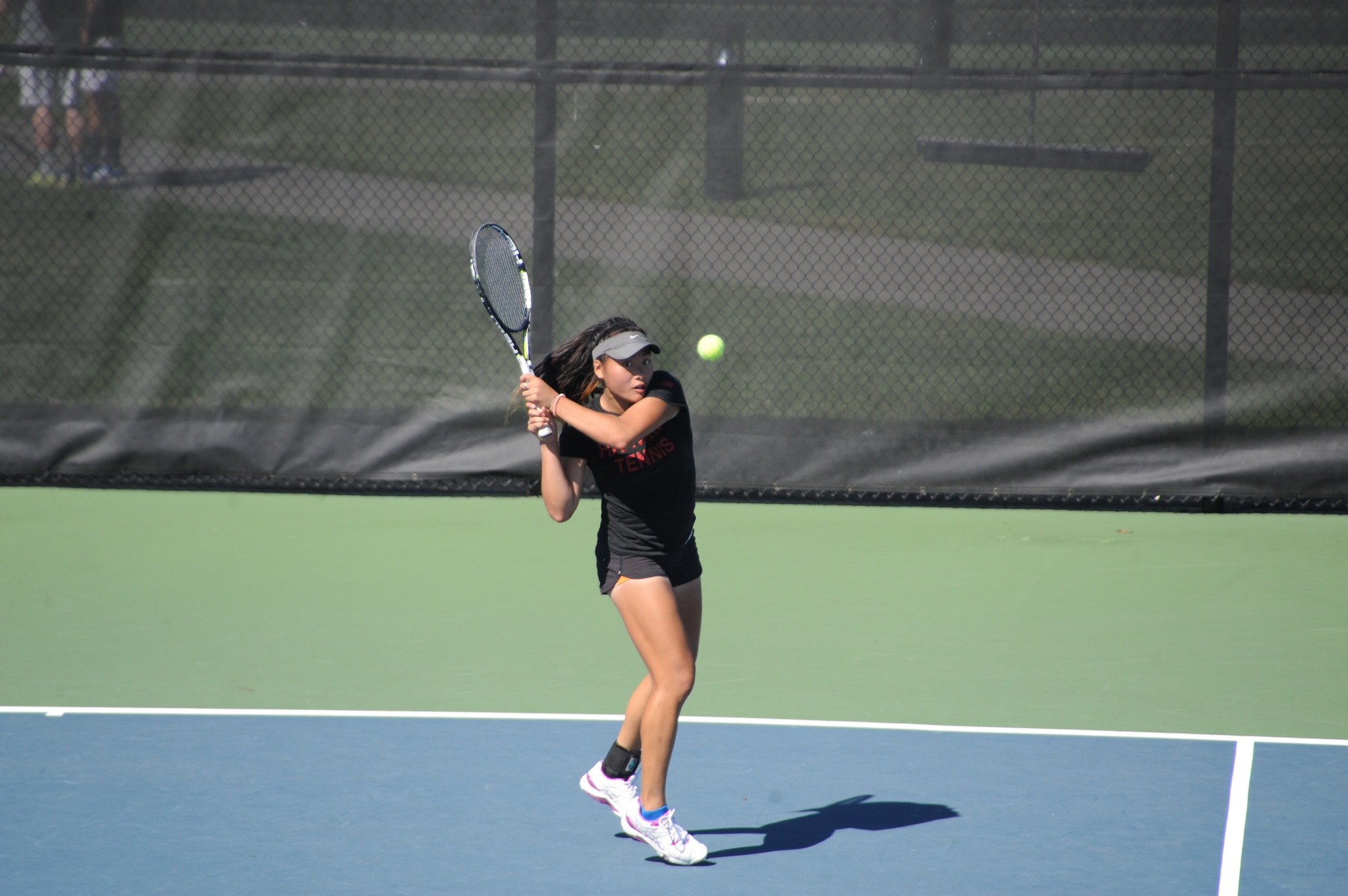 With a promising start against Howard University in the books for the Harvard women’s tennis team by Friday evening in Washington, D.C., the squad looked to be firing on all cylinders.

But after the weekend was completed, the Crimson (1-2) proved that it was unable to capitalize on its fast start. Competitive losses against Maryland (1-0) and George Washington (1-0) took away the momentum generated during Harvard’s 7-0 sweep of the Bison (0-1).

The top three spots of the lineup are where the Crimson put forth its most promising results over the matches. Playing at the top slot for the first time in her dual career for Harvard, sophomore Jenna Friedel posted a winning record over the weekend, 2-1. Sophomore Irene Lu and captain Annika Ringblom played to similar finishes at the second and third positions, respectively.

While the Crimson’s returners tended to shine brighter in the nation’s capital, the squad’s rookies still played a significant role in the first set of dual match action of their college careers.

“We have had a lot of good hitting this weekend, especially from the freshmen for whom this was their first team match,” Lu said. “I am excited to watch our team improve from week to week and see what is in store for us in the future. I think this weekend was a good test for the team and gave us a taste of close matches we may have during the rest of the season.”

Upon completion of its contests against the Colonials and Bison, Harvard traveled to College Park, Md., to face off against the Terrapins. Maryland demonstrated that it was the Crimson’s most difficult opponent of the weekend road trip, barreling its way to a decisive 5-2 victory.

While the final score was the more definitive result of Harvard’s two losses, the individual games were quite contested. Unlike any of the previous two days’ matches, two of the Crimson’s singles contests against the Terrapins went the full distance. Ringblom fell to Maryland junior Millie Stretton in a third-set tiebreaker, while freshman Neha Gupta won her bout against Terrapins sophomore Kate Yemelyanenka, 6-4, 3-6, 6-3.

Gupta and fellow rookie Jenna Moustafa were in fact the only two members to earn points in their singles matches on the day. Similar to Ringblom, Friedel and Lu suffered losses against their Maryland counterparts. Friedel’s defeat was more contested than that of Lu given that she was able to force two tiebreakers in her two-set match. Freshman Anna Li also fell in straight sets to her opponent.

On the doubles side of things, the Crimson lost two of its three bouts. The duo of Ringblom and Li failed to complete their match given that the ultimate doubles result became obvious before its conclusion. The Ringblom and Li partnership has proven to be successful for Harvard with the pairing having tallied a 9-2 record so far between the dual and tour seasons.

George Washington winning two out of the three doubles matches to collect the event’s first point proved to be crucial in its matchup against the Crimson, as the two squads split the singles portion of the contest, 3-3.

Sophomore Natasha Gonzalez and junior Isabel Jasper were unsuccessful against the Colonials’ pairing of Kamilla Beisenova and Diana Kussainova. They fell quite decidedly, 6-1. Lu and Moustafa were closer to victory in their own 6-4 defeat, but Ringblom and Li were ultimately the only duo win in the meet and did so in tiebreaking fashion, 7-6 (5-0).

In singles, Harvard triumphed at the top three spots of the ladder with Friedel, Lu, and Ringblom each winning in straight sets, while the Colonials proved victorious at positions four through six. Given that Ringblom is the only senior on the squad, the strength of Friedel and Lu’s play at the top will be crucial for the Crimson going forward. According to Ringblom, the duo is off to a good start.

“Irene and Jenna are great role models to the incoming freshmen on how to run down every ball and support all of their teammates even during big points,” Ringblom said. “Since they are only sophomores, I am very excited to see them grow as players this season and the next two years.”

In its first competitive action of the spring season, Harvard put forth a strong all-around performance against Howard. By the end of the day on Friday, the Crimson had claimed its first sweep since its victory over Providence in March of last year, 7-0. While the group certainly achieved a significant accomplishment, some shine should be taken off the win with Harvard’s path to success having been aided by two Bison forfeitures.

In the singles portion of the event, Ringblom kicked off her winning weekend with one of the more dominant victories of her Crimson career. Playing at the third position, the Palos Verdes Estates, Calif. native blanked Howard senior Sajela Harlow, 6-0, 6-0.

“Annika started this weekend with a bang,” Lu said. “She opened with a strong win over Howard, the first singles win of the season for the team. Annika continued to play at a high level throughout the weekend against George Washington and Maryland. She has been moving and hitting some of the best balls I have seen from her, and I am excited to see this momentum carry through the rest of the spring.”

Friedel, Gonzalez, Gupta, and Lu continued the trend for Harvard, each cruising to straight set victories against their respective opponents. The squad also collected its doubles point without much fuss, as it was undefeated in that portion of the match, as well.

The duos of Ringblom and Li and Mustafa and Lu both bested their Bison opponents in identical fashion, 6-2. Harvard’s final doubles match was a non-event, however, as Jasper and Gonzalez won by forfeit. Moustafa’s singles victory was also a forfeiture and helped the Crimson pick up its seventh and final point of the contest.

—Staff writer Jackson. M. Reynolds can be reached at jackson.reynolds@thecrimson.com.