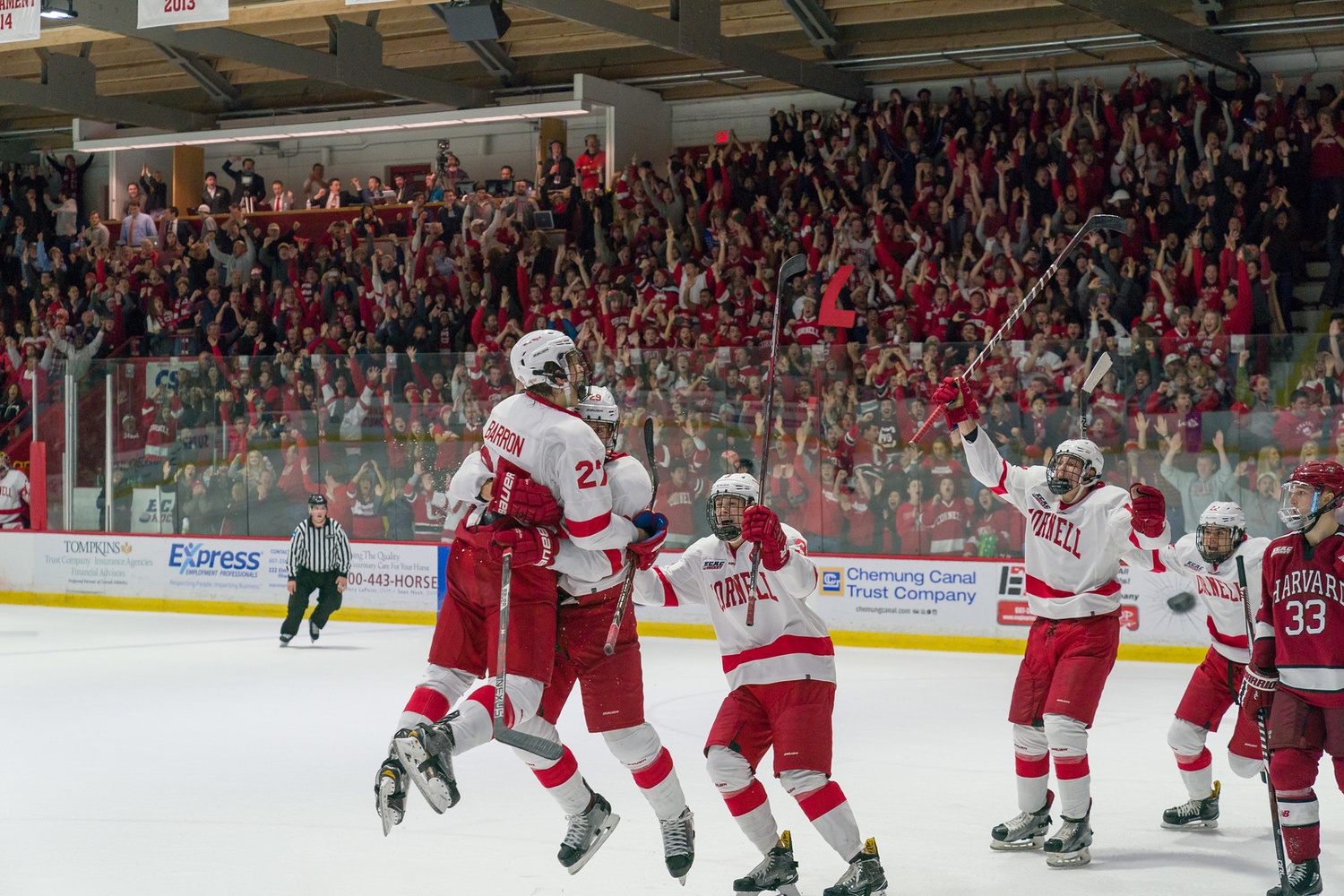 Back in November, blue-liner Alec McCrea's shot crossed the line with 2.3 seconds remaining, locking up the victory for Cornell. By Courtesy of David Burbank
By Spencer R. Morris, Crimson Staff Writer

In recent years, the Harvard men’s hockey team has skated in some of the country’s most storied arenas, from Madison Square Garden to Mariucci to more local ice sheets like TD Garden and Conte Forum. The Crimson certainly loves playing at these historic venues, just as it enjoys staying home and hosting teams in Cambridge.

And yet, even with the appeal of hitting the road and the comfort of the Bright-Landry Hockey Center, the team would still rather play its upcoming tilts with No. 2/4 Cornell and Colgate in another place: the meat grinder.

Donato and his Harvard squad know what’s in store this weekend, as the Big Red (16-2-1, 10-1-1 ECAC) and the Raiders (10-10-4, 6-5-1) barrel into town bringing their grit and defensive intensity with them. Both visitors are looking to cap off sweeps in their regular season series with the Crimson (9-6-4, 8-3-3), after an early-season trip to Upstate New York proved unfruitful for this weekend’s hosts.

“We got the team together after that and said, ‘Hey, this is what we need to do. We can’t take any shifts off, we can’t take any games off,’” Donato said. “Having our upperclassmen step up and show the freshmen the ropes…every game matters, no matter if it’s the beginning of the year or mid-season.”

Not only did Harvard return to Cambridge on Nov. 12 with zero points, but the weekend also kicked off a slump that saw the Crimson lose four straight games for the first time in more than two seasons. The Monday following this losing streak, the Harvard icemen dropped out of the USCHO top-20 poll, where they have remained ever since.

Cornell and Colgate each contributed to the frustration of a Crimson team that was finally forced to confront the realities of losing such an esteemed senior class in 2017.

Harvard started the weekend in Hamilton, N.Y., where it ran into a hot Raiders goaltender in sophomore Colton Point. Despite throwing 31 shots at Point, the Crimson managed to break through just a single time. The following night, Big Red junior Alec McCrea cashed in on a slew of Harvard penalties with just two seconds left, giving his team the win.

“We had kind of a heartbreaker at Cornell,” freshman forward Jack Badini said. “We thought we deserved better, and so we’ve been looking forward to this one.”

For these teams, a lot has changed since mid-November. A once-ranked Colgate team has lost seven of its last 10 contests, Cornell has ascended another 10 spots in the national poll to No. 2 in the country, and the Crimson have turned things around in 2018 despite a bit of a goaltender battle emerging.

Conversely, plenty has lingered since Harvard’s initial meeting with these two ECAC foes, such as the team’s focus on avenging the point-less weekend.

“Ever since then, we’ve had a bitter taste in our mouth,” Donato said. “From that point on, we kind of hit a skid after that. It was really tough to get out of that groove of playing so well and not getting rewarded for playing to the best of [our] abilities.”

Both the Raiders and the Big Red have benefitted from stellar play between the pipes throughout the season. Point and Cornell freshman Matthew Galajda sit among the ECAC’s top three and the NCAA’s top six in save percentage (.940, .930) and goals against average (1.88, 1.66).

These numbers reflect the stinginess and grit played by both teams visiting this weekend. Harvard expects nothing less.

“Cornell has got a good goalie, and obviously he’s really hot right now,” said Donato, when asked about the opposition. “They’re big, they get the puck behind you, and they work you down low…. For Colgate, they have a hot goalie as well. He’s been really good this year. They’re a team that plays consistent and they’re very disciplined.” 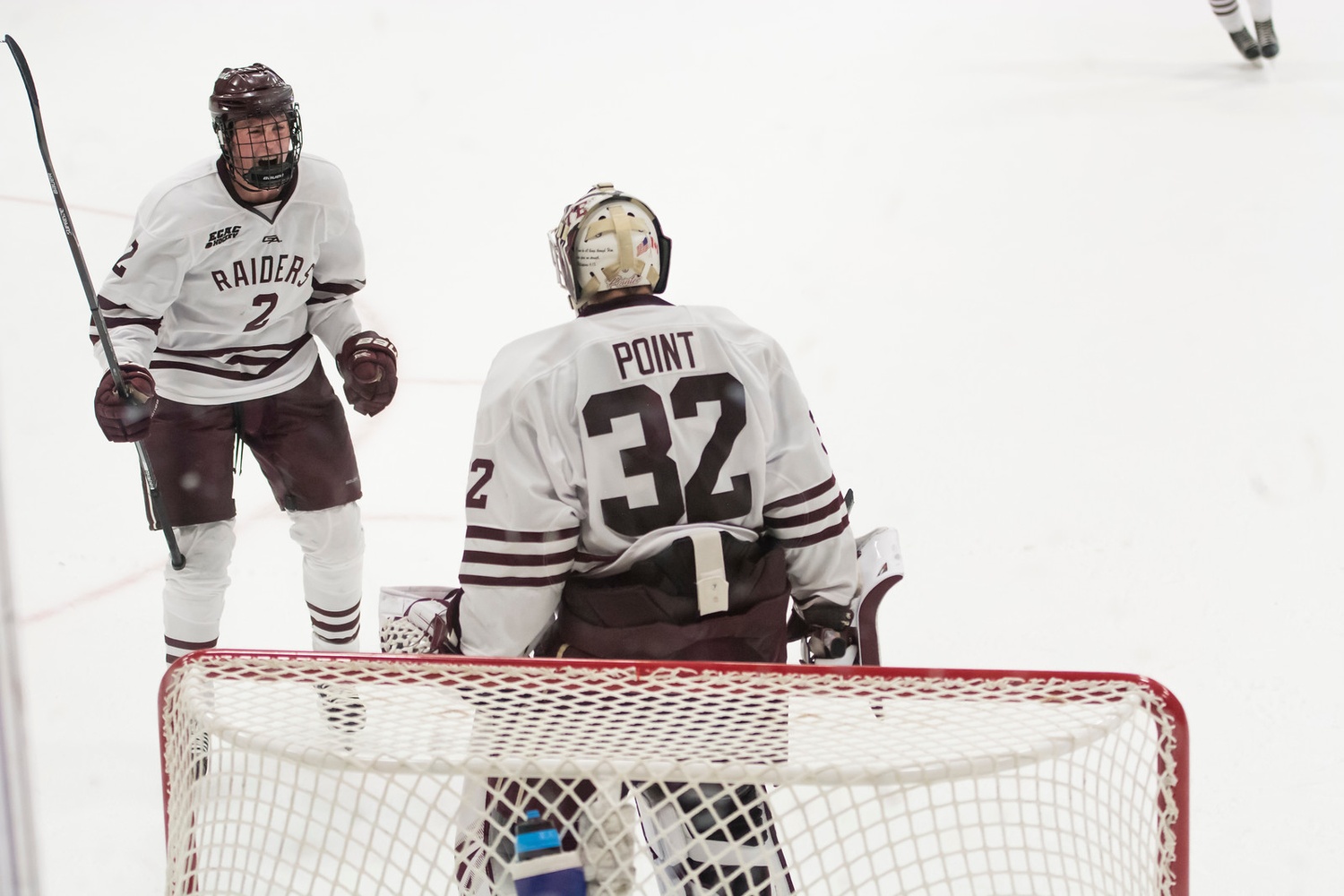 Sophomore goaltender Colton Point shut Harvard down in November's meeting. The Crimson will look to make Point's life a bit more nightmarish this time around. By Courtesy of Colgate Athletics

While the defensive prowess of both squads is undeniable, success on the other side of the puck is what distinguishes the Crimson’s competition this weekend. Cornell boasts an offense nearly as potent as its lockdown defense, whereas Colgate struggles to pot the puck. The Big Red scores the eighth most goals per game (3.42) in Division I. Coupled with Galajda’s solid play, this has earned Cornell an NCAA-best average goal margin of +1.89.

Meanwhile, Colgate’s offense—especially of late—has scarcely turned heads. Coming off a goalless home-and-home series with the Big Red last weekend, the Raiders have mustered an average of just two tallies per game over their last 10. This number is down a third of a goal since the November clash with Harvard.

Even back then, however, Colgate ranked bottom-10 in scoring, and this season-long struggle to find twine has resulted in a pedestrian –0.04 average goal differential, tied for 31st in the country.

“We know Cornell is going to be a battle,” Badini said. “We’re not expecting it to be a high-scoring game, so every little detail is important in that one. And then Colgate, same thing…. Two solid teams and we’re going to have to bring our A-game for sure.”

The low-scoring style of both foes this weekend will not deter Donato, Badini, and the rest of the Harvard forward corps. Scoring three goals a game in 2018, the group has ridden Donato’s stellar season to more quality chances and an uptick in complementary scoring.

Heading into the weekend, Donato leads the ECAC in goals (19), points (29), per-game averages for both (1.05 and 1.53, respectively), hat tricks (2), and shots on goal per game (5.47). The Boston Bruins prospect has accomplished all this in just 19 games, which is tied for the fewest among the top 33 point-scorers in the conference.

Because of his performance to this point, Donato currently sits second in the voting for the Hobey Baker Award, given annually to the top NCAA men’s hockey player.

Leading the offense for Cornell, senior and alternate captain Trevor Yates paces the Big Red in both goals (11) and points (17) and has proven his clutch factor multiple times this season, potting three game-winners. Back in November, the Crimson held the Beaconsfield, Que., native scoreless and will attempt to do so again.

Cornell benefits from significant scoring depth, however, with forwards from all four classes accumulating double-digit points. So tempering the Big Red attack involves more than just shutting down Yates. Among these double-digit scorers is sophomore Jeff Malott, who had a hand in every Big Red goal en route to a three-point night in the recent last-second thriller.

Six Raiders skaters have also eclipsed 10 points on the season, albeit in more games due to Colgate’s earlier start date than the Ivy League teams. Leading the charge up front is sophomore Bobby McMann, who has pocketed 10 goals and 10 assists through 24 contests.

To flip the script from November, keeping these teams’ offensive pieces in check is a must for Harvard.

“We learned that every team has an offense,” said Donato, when asked what his teammates took away from the November tilts. “Sometimes we would get down when we were playing defense a lot, but at the end of the day we’re going to play a lot of good teams, and we’re going to have to get comfortable playing defense.”

That being said, if the Crimson wants to remain unbeaten since Dec. 1 (6-0-3) in ECAC play—not to mention end Cornell’s eight-game unbeaten stretch (7-0-1)—punching through two seemingly impenetrable net-minders will be of greater emphasis.

For Harvard, this weekend will mark the second straight Friday playing the No. 2 team in the country, after the Crimson skated to a back-and-forth draw with Clarkson last week.

“It’s not a question of playing at that level, or if we had that talent,” Donato said. “It’s getting up and doing it every night and not taking nights off, or taking shifts off. We finally kind of learned how to get in that routine.”

As everyone in the program acknowledges, last time coach Donato’s squad clashed with these two Upstate New York rivals, it hit its rough patch of the season and is still paying for it in the standings. This time around, with conference standings starting to settle and the Beanpot fast approaching, Harvard cannot afford a relapse.

If all goes well, the two games will end up right where Ryan Donato and his teammates want them: in the meat grinder.