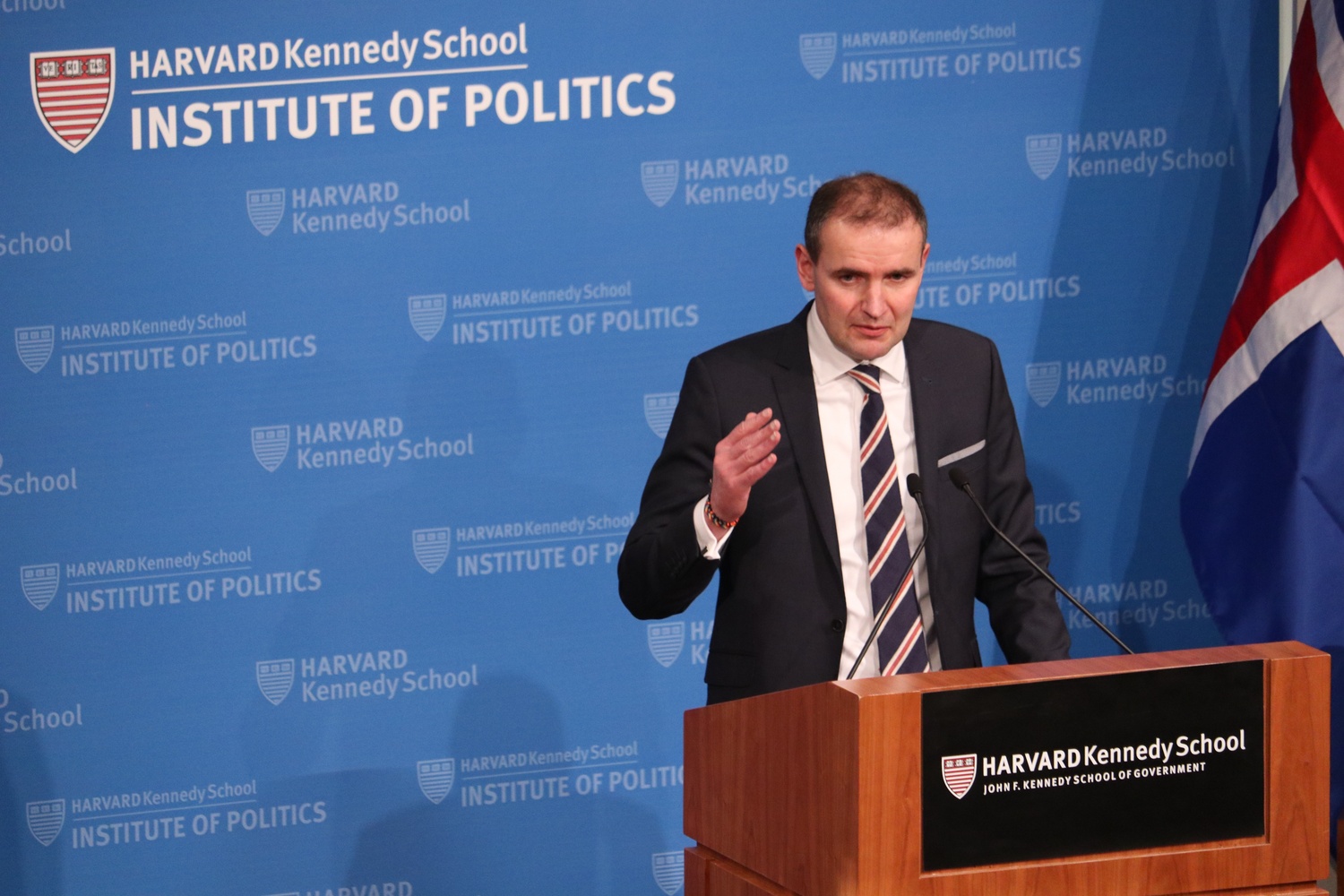 President of Iceland Guðni Th. Jóhannesson of Iceland addresses the John F. Kennedy Jr. Forum at the Institue of Politics on Friday. By Amy Y. Li
By Alexandra A. Chaidez, Crimson Staff Writer

Iceland President Guðni Th. Jóhannesson spoke about the country’s robust economic growth as well as the #MeToo movement during his visit to the Institute of Politics last week.

Jóhannesson was elected in Aug. 2016 in the wake of the resignation of the Prime Minister Sigmundur David Gunnlaugsson, who gave up the presidency after revelations about his links to secretive companies in offshore tax havens. The former historian rode a wave of anti-establishment sentiment and won election to the largely ceremonial role on a “non-partisan” platform. He now enjoys an 81.8 percent approval rating in Iceland, according to The Reykjavík Grapevine in June 2017.

“I think you have to have the right balance between belief in yourself and your capability to be a force for good and humility and awareness that you are not better than the rest,” Jóhannesson said in an interview with reporters before his speech Friday when asked about his approval rating.

Jóhannesson touched upon Iceland’s strong recovery from the 2008 financial crisis, citing growth in the important industries of fishing and technology. Jóhannesson also highlighted the growth of the tourism industry–1.7 million tourists visited Iceland in 2016, triple the number that visited in 2010.

“We need to have a free flow of people and ideas and services,” Jóhannesson said. “We need to build an open economy and then the future will be bright.”

Icelandic pride was on display during his visit, as he used the example of the national soccer team’s unlikely qualification to the World Cup as a time Iceland “punched above their weight”–a phrase repeated by Jóhannesson throughout the speech. Still, Jóhannesson underlined the importance of an “inclusive” sense of national pride.

“[Nationalism] gives you a sense that you are part of society and we are in this business together of living here and creating a better world,” Jóhannesson said. “Therefore, it is imperative and essential that nationalism be inclusive and tolerant.”

Jóhannesson also emphasized that Iceland is “not here to be perfect,” referencing the #MeToo movement’s presence in the county.

“While I agree that Iceland is in many ways a more secure place than other parts of the world, we should definitely not just simply salute that fact and pride ourselves of that and ignore the bitter truth that there is plenty we could do so much better,” Jóhannesson said.

“I think for us Icelanders we can enjoy the fact that you guys, for instance, see ourselves as a safe secure happy country but must never just stop there and honestly face the fact that we can not tolerate sexual harassment, sexual violence,” he added.

Talk about President Trump was not absent from the Icelandic President’s visit. When asked if he would be meeting with the U.S. President during his trip, Jóhannesson said he did not plan to pay a visit to the White House.

“I will not be meeting President Trump on this trip. It is a very short visit. I arrived yesterday and I leave this afternoon, so maybe some other day," Jóhannesson said.