The plaques from past victories line the walls of the “Bat Cave,” serving as daily reminders of the Harvard rowing program’s long-time greatness. The coxswains for the Harvard-Radcliffe women’s lightweight crew appreciate the program's greatness, but remain unintimidated.
By Connor J. Wagaman 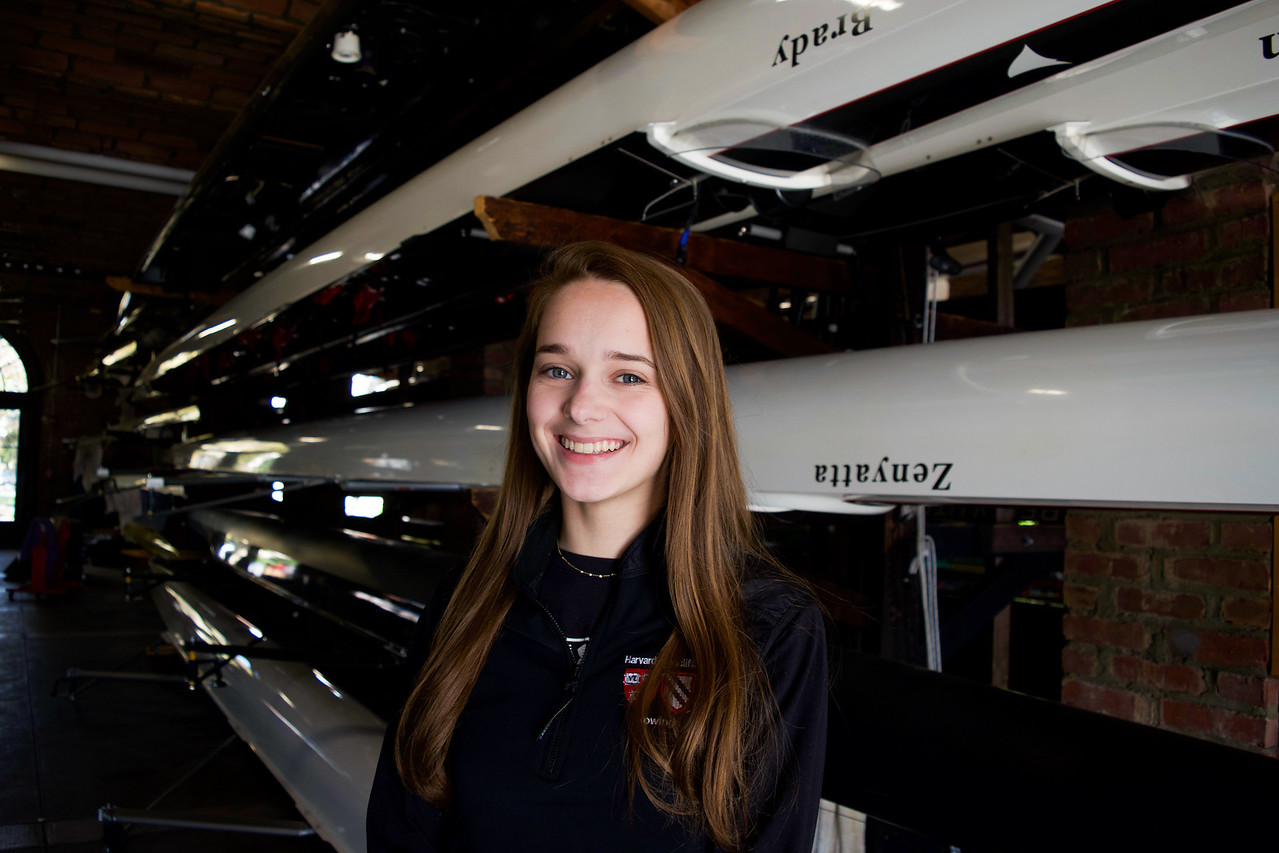 Freshman Mary Kolesar is the only coxswain with prior experience in high school. By Amanda Y. Su

The plaques from past victories line the walls of the “Bat Cave,” serving as daily reminders of the Harvard rowing program’s long-time greatness. All-Ivy athletes, national team members, and even Olympic medalists have sat, learned, and talked in this imposing room.

The coxswains for the Harvard-Radcliffe women’s lightweight crew appreciate the program’s greatness, but remain unintimidated.

“We’re a pretty unique squad because all of us are walk-ons,” junior coxswain Juliet Pesner said. “Claire [Burch] and I walked-on at the same time in our freshman year, so two years ago.”

Aside from freshman coxswain Mary Kolesar, who coxed in high school but was not recruited, all the coxswains were completely new to rowing when they first set foot inside Weld Boathouse along the Charles River.

Today, they are each part of the team.

Coxswains are much more than just a set of eyes for a boat full of backward-facing rowers. In practice and in races, a coxswain serves as the in-boat liaison for the coaches.

Navigation, though, is not an impromptu action of steering around obstacles and turns. Planning the right course is a process that begins days or even weeks before the big day.

“One thing that I like to do is spend a lot of time just looking at physical maps of the course and drawing lines on them to show what covers the shortest distance,” Pesner said. “It’s not like something you calculate — even though Claire [Burch, a physics concentrator,] probably has. But, yeah, seeing what the tightest lines are, there’s kind of conventional wisdom about it.”

The Head of the Charles provides a unique advantage to the host’s teams because it takes place on Harvard’s home course.

“We’re fortunate that, for such a big race, it’s [a course] that we’re on every single day,” Burch said.

Stellar coaching also plays a part in planning the best course, especially for races in unfamiliar waters. The toughest comes with how much and how quickly to steer the boat.

“It’s a lot about the turns — figuring out where the big turns are, where you need to start the turns, how to get through the bridges on the turns, navigate other boats,” senior Krista Anderson said. 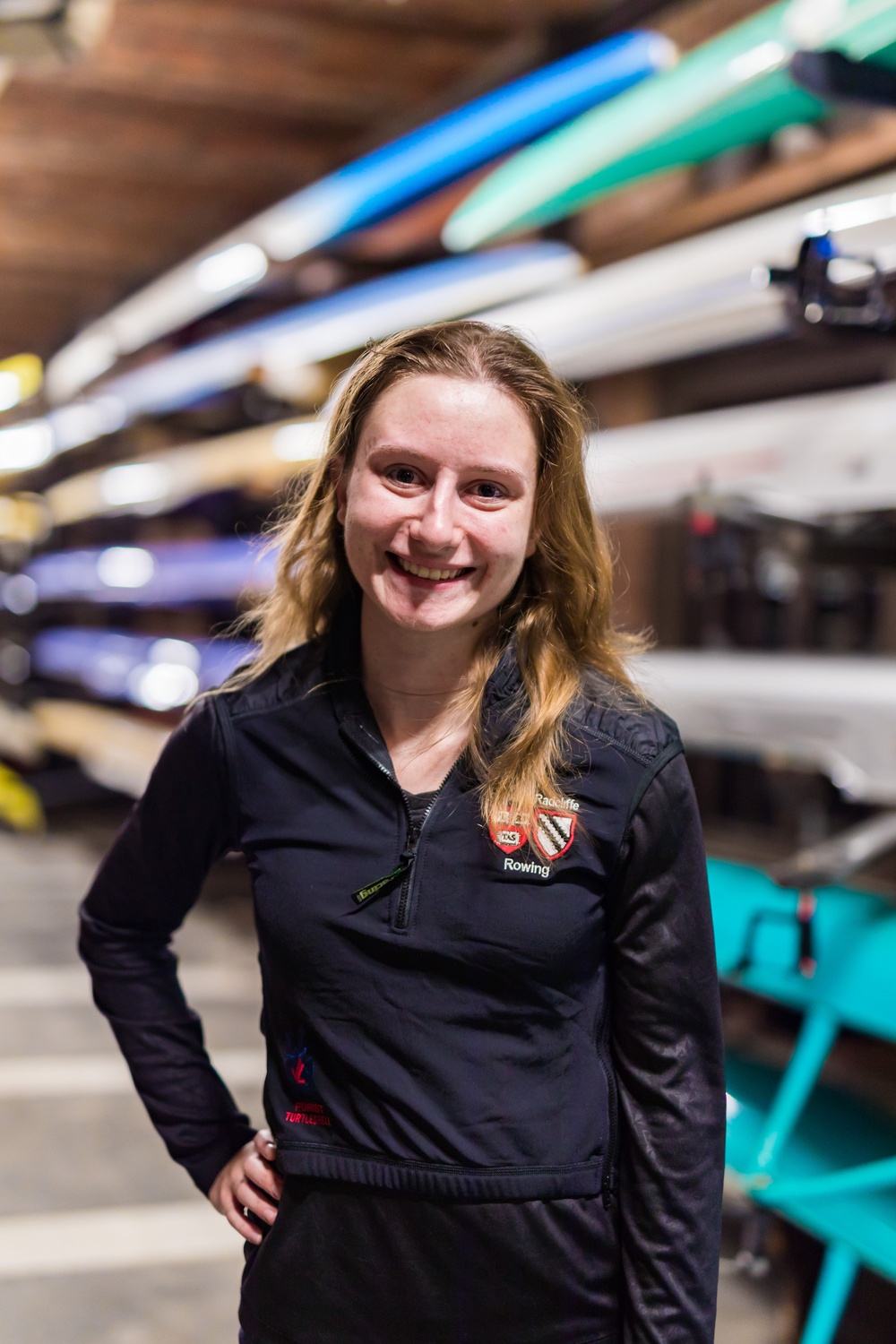 Krista Anderson, along with the rest of the coxswains across the crew program, are just as responsible for motivation as they are for navigation. By Joshua Y. Chiang

In addition to steering, coxswains are also tasked with keeping morale up during the dregs of a race’s three- or four-mile coordinated sprint. Rowing is akin to a 20-minute three-legged race, except with four or even eight participants instead of just two.

“Some of the most motivating things are hearing where you are on other boats, and what’s called walking through another boat, which is when you go from being behind them to all the way out ahead of them, and some people would say, ‘picking people off,’” Burch said.

Keeping the entire boat of rowers alert and in sync is crucial to a crew’s success. The falter of a single rower’s stroke can cause the entire boat to, in rowing parlance, “catch a crab.” Any crab requires the boat to stop and restart rowing, and a particularly forceful crab can even eject a rower.

All these motivating efforts require heavy thought, energy, practice, and rehearsal from the coxswain. Like quarterbacks watching tape after a football game, coxswains often listen to in-race tapes of what they said and how they said it.

“I think when I first started coxing, I had no idea how much you could possibly think about the words that came out of your mouth,” Pesner said. “You listen to recordings of yourself during your race — for example, you think about down to the individual word, what were the words that were most effective, what was not effective, what do you listen to yourself say and kind of cringe — cause it happens, where you’re like, ‘Why did I say that, that wasn’t motivating at all!’”

Because of the heavy impact of their words on the rowers, vocal health is imperative to coxswain success. 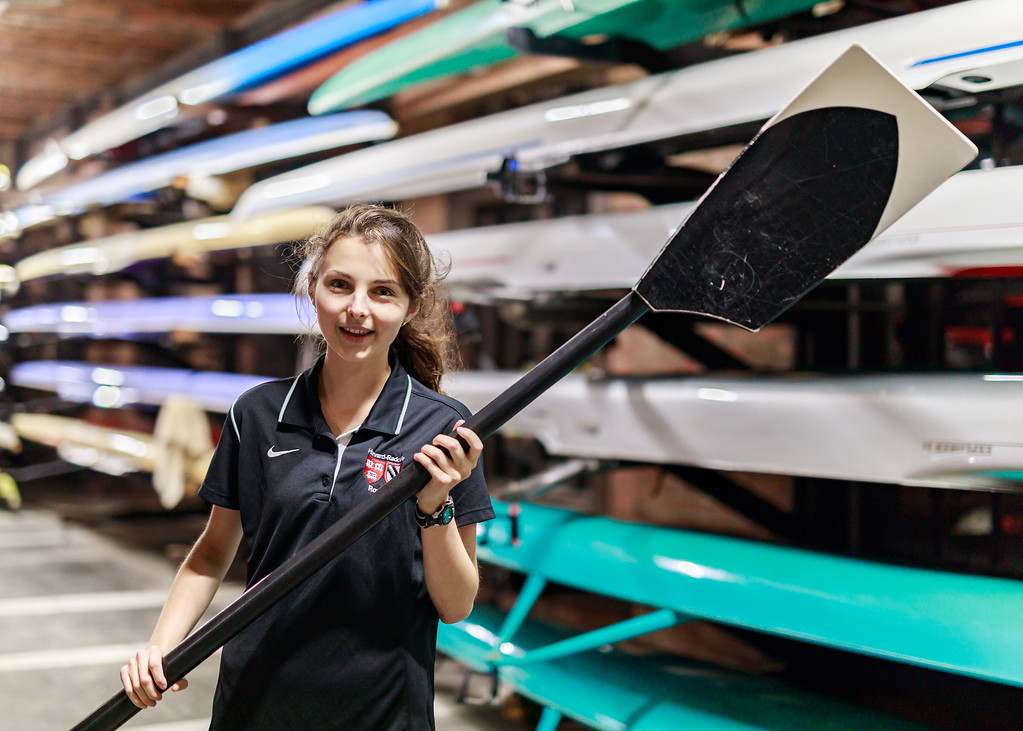 Outside of her role as a coxswain, Claire Burch conducts physics research and is interested in hydrodynamics. By Joshua Y. Chiang

Although coxswains today use a voice-amplifying “cox box,” the heat of the moment can still bring significant vocal strain and the occasional loss of voice.

“When you get, like, really excited and you’re in a race situation, [yelling] just kind of happens naturally,” Pesner said. “It’s not even something I think about that much.”

Despite the high level of commitment required from coxswains every day, from charting out the shortest route and brainstorming improved motivational tricks and phrases, to meeting with coaches and exercising with the team, life for coxswains does not start and end at the boathouse.

“I like doing visual arts a lot, like painting and sketching,” said freshman Mary Kolesar, the newest addition to Harvard’s coxswain squad.

Burch even brings some of her non-coxing life to practice every day and enjoys exploring the intersection of her extracurricular and academic interests.

“I do physics research, and I always try to bring in a little bit of that hydrodynamics to practices, to varied success,” Burch said. “Thinking about shifting your center of mass during parts of the stroke in a way that will keep the majority of your momentum toward its bow and sort of offset that inertial movement the least. So I do try to kind of talk to them about these things.”

The coxswains appreciate the diversity of their group and of the team in general.

“I think one of the coolest things about our team is that everyone is an incredible athlete and really focused on the sport, but everyone comes from a really wide array of places on campus,” Pesner said.

This April, Burch led the Harvard third varsity eight to a victory over Princeton by 0.548 seconds at the Eastern Sprints Championships after falling to the Tigers earlier in the month. Perhaps Harvard rowing’s improved knowledge of hydrodynamics made the difference.