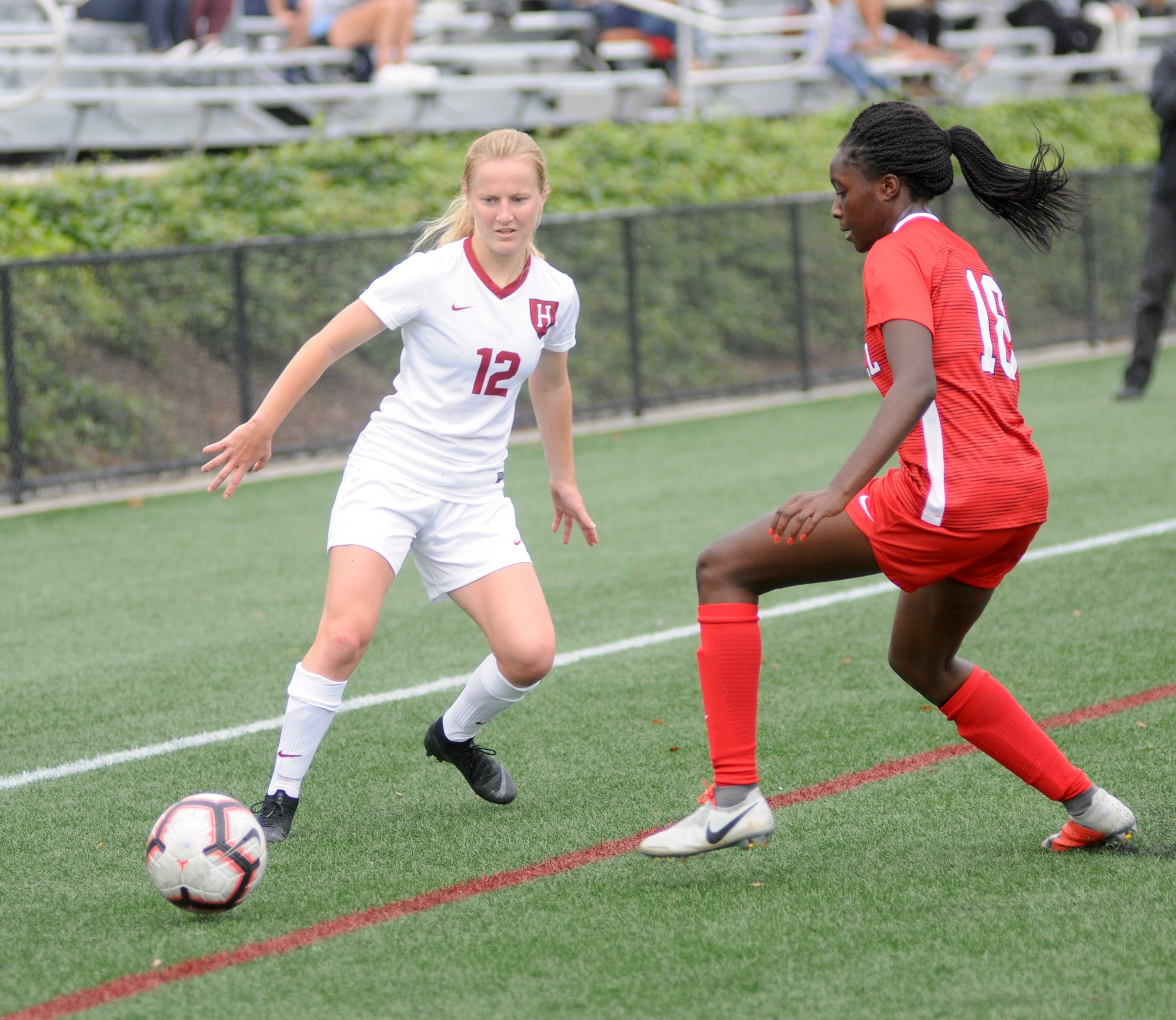 Junior forward Murphy Agnew was unable to convert on either of her two shots against the Tigers. By Henry Zhu
By George Hu, Crimson Staff Writer

In a heavyweight clash between two of the top three teams in the Ivy League, the Harvard women’s soccer team entered Saturday night’s contest at Princeton needing a win to keep pace with conference leader Penn. Under the lights on Sherrerd Field at Class of 1952 Stadium, the Crimson started quickly, firing off the first two shots of the game within the opening ten minutes.

Harvard continued to put pressure on Tigers junior goalkeeper Natalie Grossi in the first half, forcing her into three saves before halftime. The away side was not able to capitalize, however, leaving the door open for Princeton to seize control of the game after the intermission.

Seize control is precisely what the Tigers did, as two goals by junior forward Courtney O’Brien put the home team up for good. The Crimson was not able to repeat its heroics from the previous weekend — when it came back from 2-0 down on the road against Brown to win, 3-2 — and was ultimately shut out, 2-0, this time around.

With the victory, Princeton (9-3-2, 3-1-1 Ivy) moved into a tie with Harvard (6-6-1, 3-1-1 Ivy) for second place in the Ivy, with two games remaining for both sides. Coupled with the 2-1 win that Penn pulled out over Columbia hours earlier, the Tigers and the Crimson now both sit three points back of the league leaders.

“We knew going in that Princeton would be a very strong opponent, [having been] in and out of the Top-25 all year,” Harvard coach Chris Hamblin said. “I thought we did an excellent job taking the game to them in the first half, but unfortunately we weren’t able to capitalize and they turned it around in that second half.”

O’Brien supplied the fireworks on the field Saturday night, as her goals in the 47th and 60th minutes were all the Tigers needed to come out on top. The first came against the run of play, just after sophomore forward Murphy Agnew saw a great opportunity saved by Grossi on the other end of the field. She collected the ball at the left side of the box, turned to shift the ball to her right foot, and fired low into the bottom left corner of the goal.

Thirteen minutes later, O’Brien tacked on a well-placed, lofted header to secure the brace. The two goals were her first of the season, as she finally broke through after getting on the score sheet several times earlier in the season for assisting goals.

The Crimson was able to keep star forward Mimi Asom quiet for most of the night, save for her assist on O’Brien’s opening goal. Asom entered the game leading the Ivy League with 55 shots and 10 goals to her name, but the visitors limited her to three shots and lone assist on Saturday.

“They have a lot of players who can score in a lot of different ways,” said Harvard captain and midfielder Leah Mohammadi. “We were able to do a good job defending Mimi, but then Courtney O’Brien ended up being to one to hurt us.”

On the other side, the Crimson saw four players — Agnew and Mohammadi, along with freshman forward Jordan Di Verniero and freshmen defender Jillian Wachira — contribute two shots each to a final total of nine shots, five of which were on goal. Another newcomer, freshman Sophie Hirst, tacked on a lone shot.

After using seven substitutions in the non-conference tilt at BU and four substitutions against Brown last week, Hamblin went with just two on Saturday. Di Verniero and freshman midfielder Lara Schenk were the only ones to make an appearance off the bench for Harvard, as the back line played the full 90 minutes.

“We were playing well in the first half, and it made sense to us to keep who we had on the field,” Hamblin said. “A lot of times, teams will sit back and try to hit Princeton on the counter, but with the personnel we had on the field, we were able to be aggressive and create quite a few quality chances.”

While the contest marked a happy return to the scoresheet for O’Brien, who collected her first two goals of the season after scoring nine in 2017, it was also a significant one for Grossi. With the shutout of the Crimson, Grossi tied the all-time shutouts record for a Tigers goalkeeper. She and Kelly A. O’Dell, Princeton Class of 1983, are now tied with 23 shutouts apiece, and Grossi will have at least two more opportunities to grab her 24th and sole possession of the record.

Harvard, meanwhile, will look regain the touch that powered its four-game scoring streak in next week’s matchup against Dartmouth. Any more dropped points now will likely knock the Crimson out of the race for the conference title.

“We’re obviously down after the loss,” Mohammadi said. “But we know we’re still in the running and we’re going to make sure to come out and play accordingly next week. You never know what can happen in the Ivy League, and we want to send it to the final weekend.”