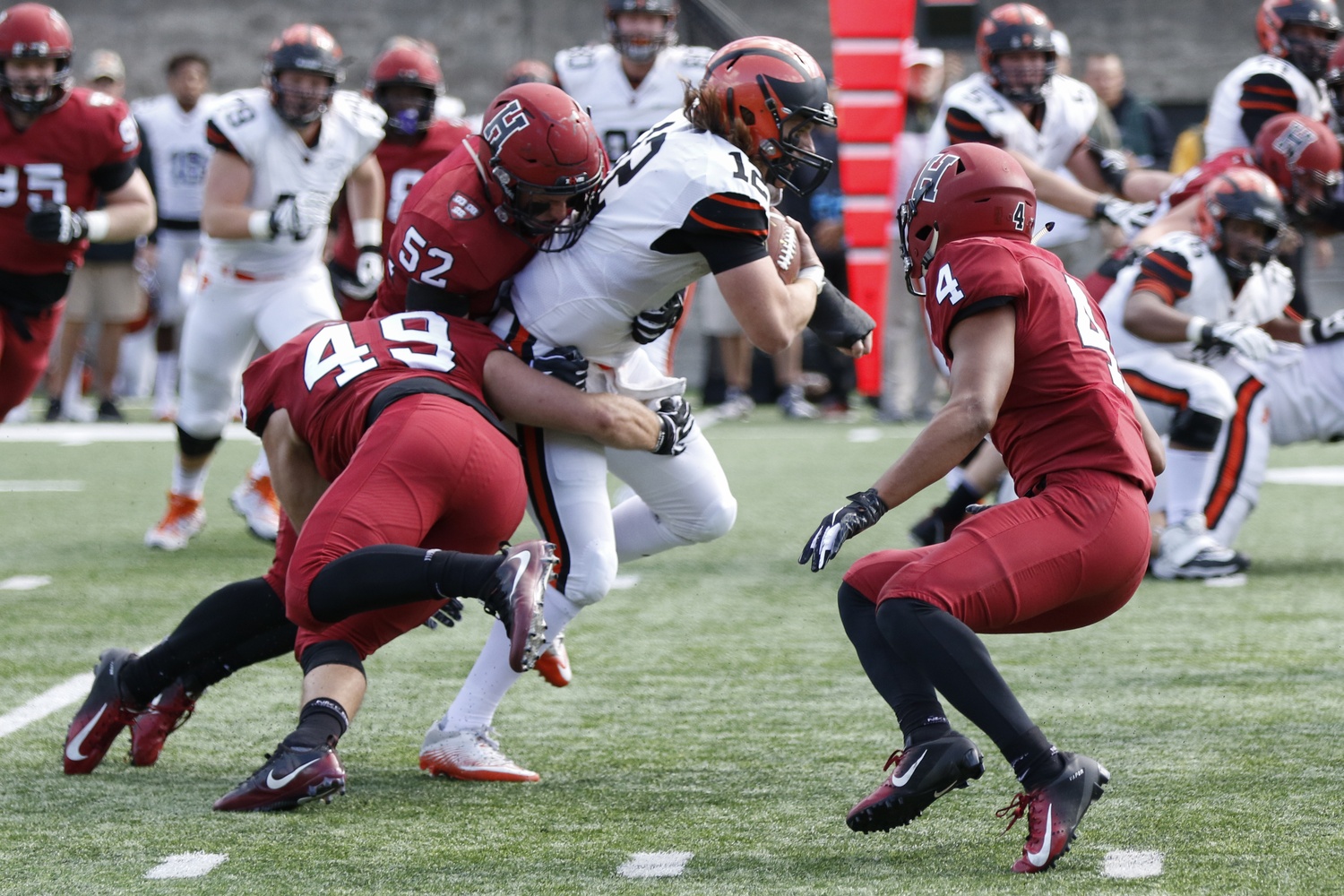 Harvard looks to pull down Princeton's John Lovett in Saturday's matchup. The defense will be especially key in the weekend's contest with offensive dynamo, Dartmouth. By Timothy R. O'Meara
By Jack Stockless

Seven years ago, Harvard hosted Dartmouth for a late October matchup at Harvard Stadium. At the time, the Crimson was 3-0 in Ivy League play, having just out-battled Princeton in a 56-39 slugfest. The Big Green, on the other hand, entered Cambridge with two losses to its name, fighting for any chance to keep its title hopes alive.

As the game began, steady rain morphed into snow. The surprising wintry conditions did not freeze the Harvard offense, however, as it piled up 395 rushing yards and did not commit a turnover en route to a 41-10 win. Future NFLers Kyle Juszczyk and Cam Brate were limited to a combined 57 yards receiving.

“It wasn’t in the forecast a week prior,” Murphy said. “There’s nobody in Harvard Stadium, it’s blizzard conditions, and we just executed really well. It was just one of those days.”

This Saturday, Harvard football travels two and a half hours north to Hanover, N.H., to face Dartmouth. This time, the Big Green is undefeated in the Ancient Eight — and overall — and the Crimson is the team trying to claw its way back into contention. Again, there is rain in the forecast. With temperatures in the high 30s, this contest may fall just short of replicating the seven-year-old snow game, but anything could happen in typically snowy New Hampshire.

One major difference between these similar-seeming contests might be the final score, as it would be surprising if Dartmouth managed to flip that 41-10 result from 2011 on Harvard’s head. The Crimson is undoubtedly better than the 2011 Big Green, but this year’s Dartmouth squad — ranked 20th in the coaches poll and receiving 394 votes in the STATS poll — is possibly the most complete team Harvard will contend with in 2018.

“I think Dartmouth’s the better team [between Princeton and Dartmouth],” Murphy said. “To me, when you have the dominant defensive team in the league, that has consistently been the ticket to winning an Ivy League championship, whether it’s Harvard or anybody else. They have three three-hundred pound, twitched-up defensive linemen. I can’t remember ever seeing that in the Ivy League.”

The Big Green’s defense outshines its offense, but each are complete units. It is first in the nation in overall defense and second in scoring defense. Key to the team’s ability to shut down opposing scoring chances are three behemoths on the line and a secondary led by the nation’s leader in interceptions.

The work of the linemen up front has freed up Dartmouth’s secondary to generate a number of key turnovers. Led by junior cornerback Isaih Swann (seven interceptions), the team has 12 total picks.

“You’ve got to be conscious of wherever [Swann] is on the field,” Crimson quarterback Tom Stewart said. “Don’t let him take any easy stuff underneath, just make sure we’re doing a good job looking him off, just taking what he gives us on each play.”

The Big Green’s offense is the polar opposite of its defense — where the defense grinds down opponents’ running attacks, Dartmouth’s ground game chews up yards seemingly at will (251.7 per game). The Big Green does not possess any one standout running threat, but so far Rashaad Cooper and Jared Gerbino have taken the reins. Cooper is a traditional running back, while Gerbino is a wildcat quarterback who has only thrown seven passes this season. Predicting Dartmouth’s sequencing and the plays on which it will opt to pass will be key for the Crimson to limit big gains.

Though the Big Green does not go to the air often, it does pass efficiently. The team is number one in the nation in quarterback rating and completion percentage. When Gerbino is not in the game, Derek Kyler takes snaps as more of a traditional signal caller. The sophomore has 10 passing touchdowns and has completed 76.4 percent of his attempts.

Harvard is a similarly constructed team in that its rushing attack and rushing defense have defined most of its games to this point. Sophomore running back Aaron Shampklin, who averages 129.7 yards per game, leads a backfield that is out-gaining its opponents’ running backs by over 118 yards per contest. It will be interesting to see whether the Crimson attempts to beat Dartmouth at its own game or switch up its strategy to combat the Big Green.

This game is Harvard’s third against a ranked opponent this fall — also No. 20/22 Rhode Island and No. 18/23 Princeton — the first time in the school’s history that it will have faced three ranked opponents in one season. The last three meetings between the Crimson and Dartmouth have all resulted in wins for Harvard, but only by a combined six points. The Crimson has also prevailed in 14 consecutive meetings with its neighbor to the north.

“It shows that what happened before us matters and what happens after us matters,” said senior safety and captain Zach Miller. “This game is bigger than ourselves and we have to play up to that ability. All the Ivy League games are basically rivalry games, so there’s a bit of added intensity going on, and we’re definitely going to bring it when we get up there.”