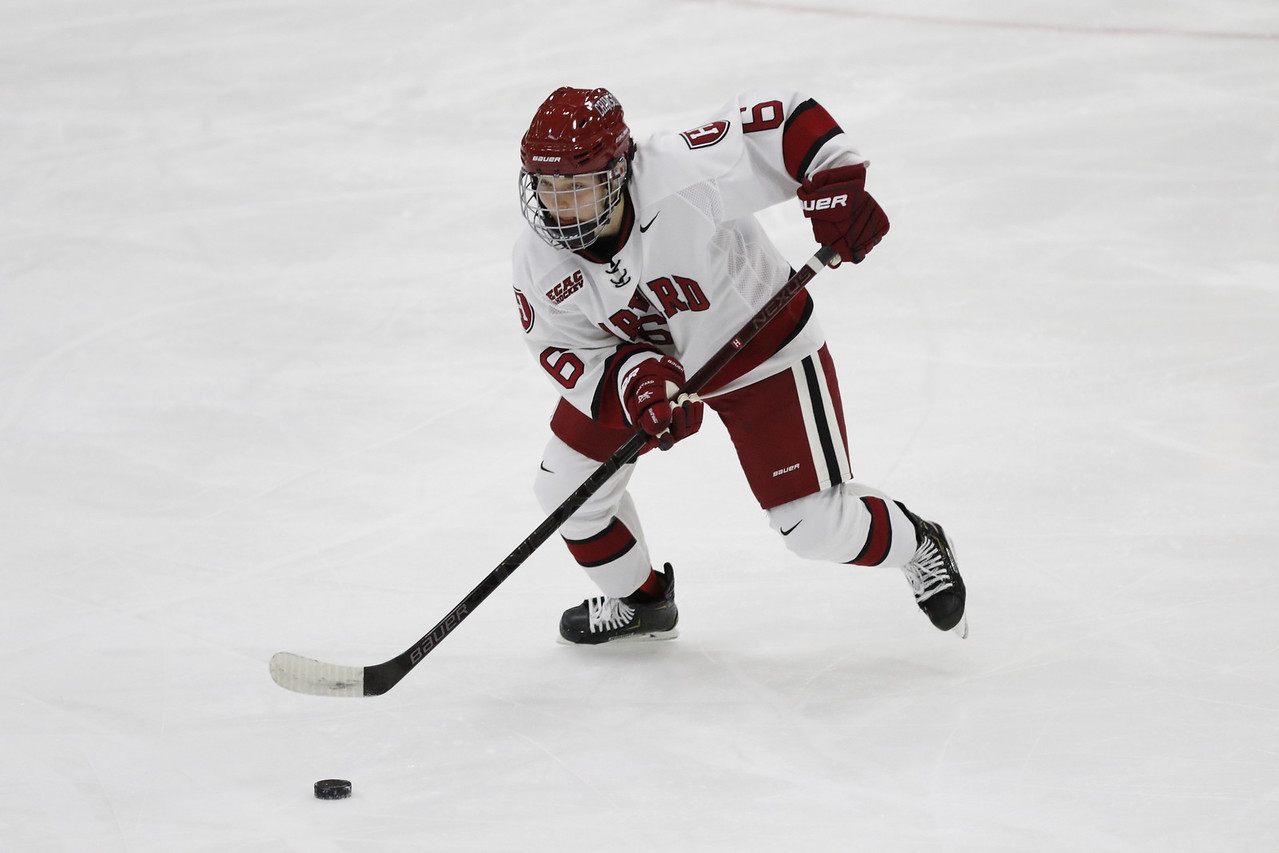 Following its win against Dartmouth, the Harvard women’s ice hockey team traveled to Ithaca, N.Y., to face No. 7 Cornell with the hosts ultimately coming out with the victory. Following the loss to the Big Red, the Crimson moved on to Hamilton, N.Y to face No. 9 Colgate but were edged 1-0, putting the team 0-2 for this weekend’s road games.

After its defeat at Cornell, Harvard (1-2, 0-2 ECAC) made some adjustments to the back line which were on display for its game against the Raiders (5-3, 2-0). However, the Crimson wasn’t the only ones playing stellar defense as Colgate matched Harvard’s energy, ultimately lead to a Raiders victory.

Halfway through the first period, freshman forward Dominique Petrie was penalized for checking, giving Colgate its first power play opportunity. However, the Raiders were unable to capitalize on the advantage due to Harvard’s solid power play defense.

“We shut them down,” senior defender Kaitlin Tse said. “That was a huge momentum gainer for the team.”

Colgate also got to showcase its solid power play defense on Harvard’s first power play, preventing the Crimson from using the advantage to gain the lead.

After a scoreless two periods, the Raiders managed to get on the board with senior forward Jessie Eldridge scoring early in the third period. Harvard, unable to answer, fell to a score of 1-0 as the clock expired.

Despite the loss, Harvard’s freshman goalie Lindsay Reed made a career-high of forty-nine saves, with twenty-one of those saves coming in the second period.

“Any night you can have a goaltender do that…it definitely gives the team confidence to play a little bit more offensively,” Tse said. “Lindsay is a good kid and we are excited to have her on the team.”

Despite the loss, the Crimson gained some key lessons for its upcoming games as it prepares for next weekend’s road game against Quinnipiac.

“We talked about getting ready,” head coach Katey Stone said. “Get ready during the week, so you are ready on the weekends. Some kids are more ready than others and we have to get those young kids up to speed, so that we can play more people in the line-up. That is our goal.”

After a frozen battle of clashing wills, Harvard fell short for its first road test of the season, losing 3-2 to Cornell.

Halfway through the first period — after some back and forth activity between the two rivals — Cornell was given an opportunity to take the lead in the form of a power play. Hoping to take advantage of this opportunity, the Big Red showered Harvard with a flurry of shots.

Harvard, despite being at a disadvantage, managed to hold off Cornell’s attack early in the power play. However, in the final seconds of the power play, Big Red junior forward Grace Graham snuck the puck past the goal line, putting Cornell on the board.

Three minutes later during another power play, the Big Red added to its lead thanks to a powerful shot by junior defender Jaime Bourbonnais.

“We started off pretty late,” Tse said. “We didn’t stick to our game plan and catered to what [Cornell] was doing.”

With a 1:23 left in the first period, the Crimson capitalized on a power play situation, managing to cut Cornell’s lead by half. During the man advantage, captain Lexie Laing redirected a shot from junior forward Kat Hughes, burying the puck inside the net. After another goal by the Big Red late in the second period by junior forward Paige Lewis, the Crimson found itself down 3-1.

In the final two minutes of the game Harvard pulled its goalie in favor of an extra skater, looking to increase its offense firepower. The Crimson scored again thanks to freshman forward Anne Bloomer, cutting Cornell’s lead to one.

With 25 seconds left in the game, Harvard looked to capitalize off its gaining momentum, but was unable to as the Big Red managed to keep the puck in its possession during the last seconds of the game.