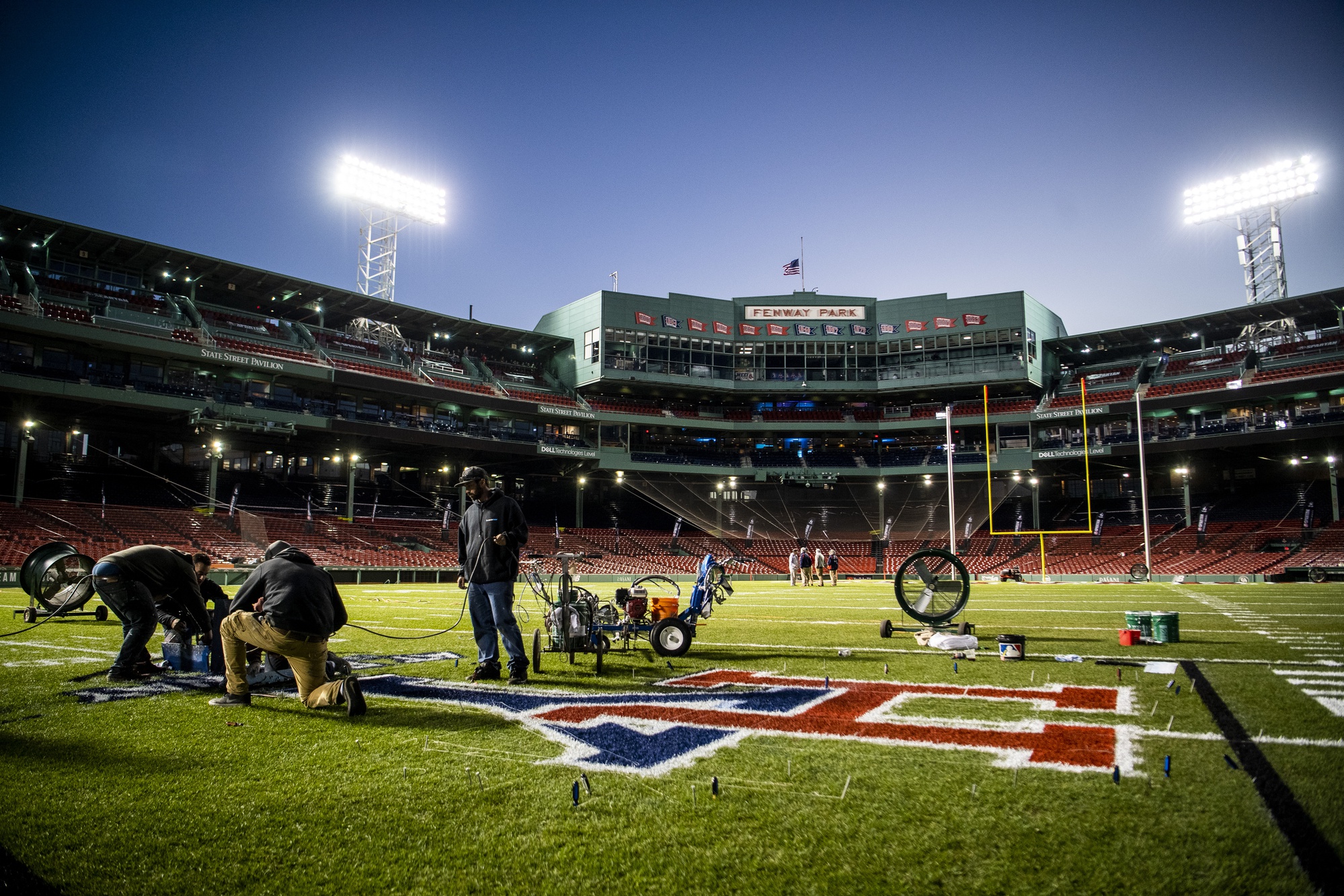 Fenway's grounds crew puts the finishing touches on the converted baseball field ahead of The Game. By Courtesy of Matthew Thomas/Boston Red Sox
By Jack Stockless, Crimson Staff Writer

Imagine yourself walking down Brookline Avenue in Boston’s Fenway neighborhood. You climb the David Ortiz Bridge which spans the bustling Massachusetts Turnpike below, and as you look to your left, you see the hulking mass of green which is the exterior of Fenway Park.

You continue across the bridge, making your way past the Cask ’n Flagon and crossing into the historic ballpark through Gate E on Lansdowne Street. Before you step across the threshold, you peer up at the towering rear facade of the Green Monster.

Climbing a flight of stairs, you near closer and closer to the grassy expanse within. Finally summiting the last step, you gaze out beyond the concourse and the left field grandstand to see two sets of yellow uprights standing tall above the surface.

Fenway Park is of course a stadium that has primarily been used for baseball since 1912, but this weekend it will play host to an equally historic gridiron battle between Harvard and Yale. The 135th playing of The Game will take place at a site other than Harvard or Yale’s campus for the first time since 1894.

In the weeks leading up to The Game, the ballpark has been abuzz with activity. Dave Mellor, Fenway’s head groundskeeper, has had to organize an ever-evolving staff to convert the baseball field into one suitable for football. He utilizes a full-time staff of four, a seasonal crew, and a contractor — Dennis Brolin, who was formerly in charge of the New England Patriots’ complex, and his company, Sports Turf Specialties — to handle the various aspects inherent in a field conversion.

“[Brolin’s] crew helps us with conversions and big projects like this and does great work,” Mellor said. “Depend[ing] on the day, there will be 20-plus people out there and some days there will be … 30 people. It just depends on the day and what scope of work is being done that day.”

For Mellor and his crew, the process began with removing the pitcher’s mound that usually occupies a prominent position in the infield as the only raised surface on the field. Next, the entire infield and any other clay surfaces are covered with a filter fabric so as to avoid cross-contamination from the sod. Sod is then layered over the clay to create a completely grass-covered playing surface.

Mellor echoes safety and playability, as it is a priority of his and Fenway’s ahead of The Game. Unlike during the Notre Dame–Boston College game in 2015, the bullpen walls out in right field are now removable. This allows for more space behind each end zone and allows more room for players to slow down before potentially coming into contact with walls. The weather also factors in heavily to a field’s safety and playability — as of Thursday, there was rain in the forecast in the days leading up to the game.

“You just never know with Mother Nature,” Mellor said. “We have two great weather services, and then everyone involved from the crew to our contractor just really stresses attention to detail and takes pride in what they’re doing.” 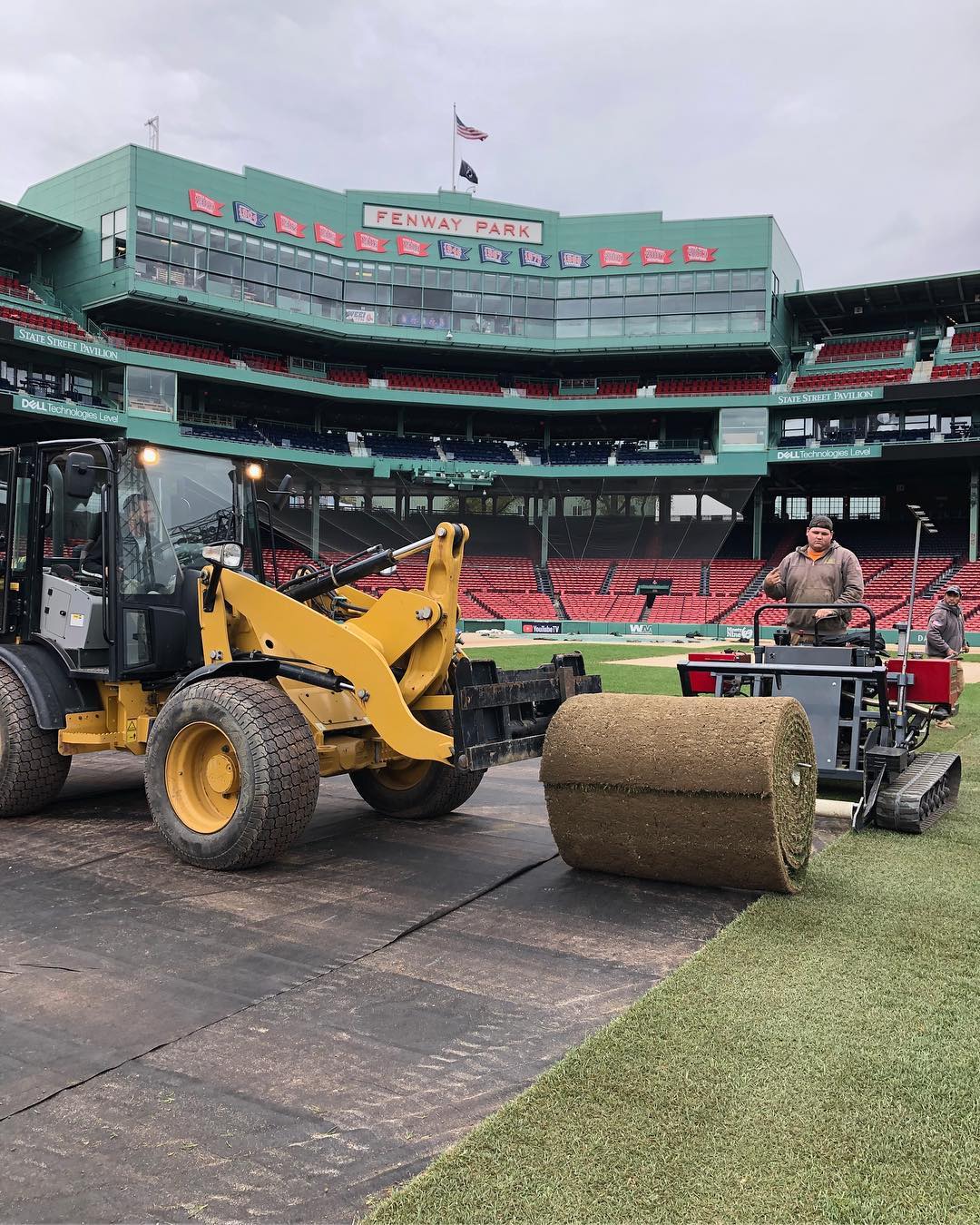 Sod is installed over the clay infield to provide an even playing surface. By Courtesy of David Mellor and Staff

Though Harvard football players are likely unfamiliar with Fenway’s playing surface, one former member of the Crimson, Bobby Leo ’67, can attest to the rain’s impact on a grass field. Leo was selected in the seventh round of the 1967 NFL draft by the Boston Patriots and played for the team in 1967 and 1968. In a game against the Buffalo Bills at Fenway in 1967, Leo took a punt back 43 yards before stumbling in the mud which coated the field.

“The field was great, except the first game I played there,” Leo said. “It was raining and muddy. I was returning kickoffs and punts mostly, but I was able to get in for some offensive plays.”

Innovations in field turf may curtail some of the slippage this weekend. With developments in the production of rolls of sod and groundskeeping improvements from the 1960s to today, players can count on a more reliable field surface that is more resistant to the elements.

“Technology’s come a long way through the years,” Mellor said. “The sod is big-roll sod. It’s four feet wide and up to 35 feet long. Each roll weighs up to a ton. That’s less seams. It’s just a heavier, better quality sod for better safety and playability.”

The field will need to measure up on Saturday, as a mix of rain and possible snow could impact the Boston area starting on Thursday night and extending into Friday morning. Though Harvard will have played two games on grass this season including The Game, the team has not been able to practice even once on grass, a first in Murphy’s 32-year head coaching career.

“We haven’t practiced once on grass this season because of the coincidence of really bad weather in the two weeks we’ve had it,” Murphy said. “In the Brown game we had sort of torrential, heavy rains that made the field really unusable, and the same thing has happened again.”

Murphy and his staff have considered hosting off-site grass practices at fields that fare better in the rain, but they decided it was not worth the investment due to the players’ jam-packed schedules.

“I always say to our kids, ‘Whatever the conditions are, it’s up to us to adapt, to evolve and figure it out, and that’s what we’ll do,’” Murphy said.

Mellor, who relishes special projects like this one because of the ability to create memories for a wide range of audiences, says that Harvard–Yale at America’s Most Beloved Ballpark will be a memorable experience.

“Fenway has an incredible aura to it to begin with,” Mellor said. “The history of this game, to be played at Fenway, I think just adds to that experience for everybody. I think the Harvard and Yale fans are some incredible fans and we’re proud to have them at Fenway.”