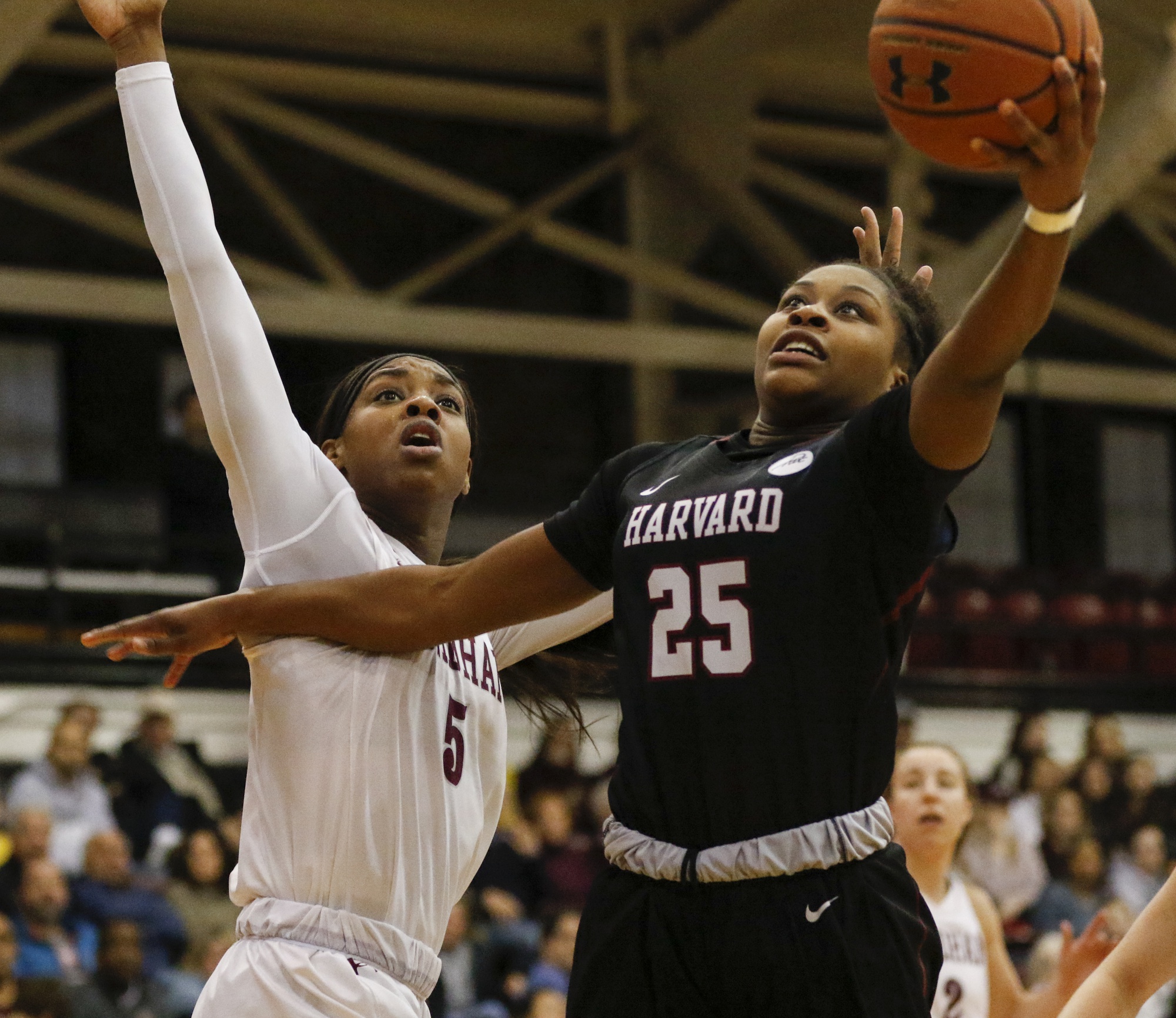 In order to be the best, you have to beat the best.

This cliché permeates the sports world frequently, but for Harvard women’s basketball, it’s a mindset they must adapt to as the start of the 2018-2019 campaign draws near. There will be no warm-up game designed to spoon-feed the team’s confidence.

For the Crimson, the season will start in South Bend, with the unenviable task of taking on defending national champion Notre Dame. But for a Harvard team looking to return to its first NCAA tournament in 12 seasons, playing the Fighting Irish will serve as a measuring stick against the very best that the country has to offer.

“I think it's a win-win for us, and it's an unbelievable opportunity, it’s gonna tell us where we are,” coach Kathy Delaney-Smith said. “I think we are better than where we've been in the recent past, and this is the test. Who better than to play against than last year’s national champions with all their stars returning? It's a big challenge for us and we really have nothing to lose. And doesn't that set up the greatest athletic matchup? And to be able to compete, let’s just give it a try.”

The road matchup means even more to one of the team’s veteran leaders.

Captain Madeline Raster, entering her final season, will be travelling home to South Bend to face off against Notre Dame.

This year, the Crimson will look to improve upon an encouraging Ancient Eight season that ended at the hands of Ivy Madness hosts Penn. A nail-biting semifinal in which Harvard had several opportunities to tie the game in the final seconds ended in heartbreak, and the resulting loss relegated the Crimson to the NIT, where they suffered an opening round loss at Fordham.

“Coming off of last year we were very disappointed in how it ended up, and this year it's all about change, so we’re establishing new rules, new traditions, new habits to form this championship culture to result in a championship in March because at the end of the day that's our main goal,” said junior point guard Katie Benzan. “We have the talent to get there, but just little changes here and there will help us push over that edge and actually get to the top versus right there. That's just the worst type of pain to be right there and able to do it, but it just didn't go your way.”

In game that felt like a hangover from the loss to the Quakers, Harvard leapt out to a nine-point first half lead before the Rams outscored them 41-14 in the second half. The disappointing loss marked the end of Taylor Rooks’ and Kirby Porter’s collegiate careers. 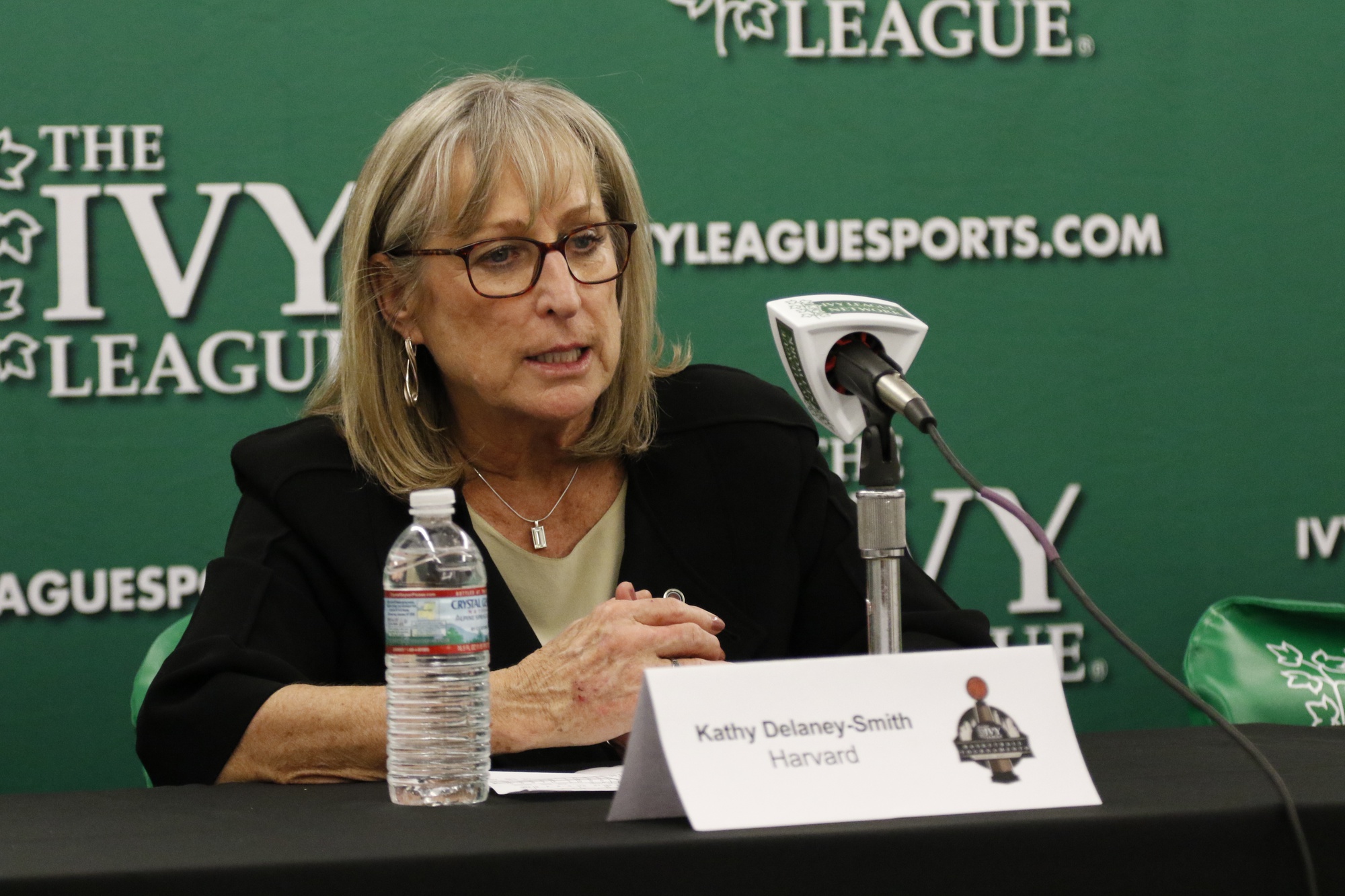 The 2018-19 season will be head coach Kathy Delaney-Smith's 37th year at the helm. By Timothy R. O'Meara

“We came off of last season pretty disappointed, knowing we had to make some dramatic changes, and we feel we did,” Delaney-Smith said. “I think the staff and I and the captains and everybody just said ‘we gotta make a change.’”

The narrow loss in the semifinals of the Ivy League Tournament, coupled with the second-half collapse in the Bronx will serve as motivation for a re-invigorated Crimson team that will open its season at Notre Dame and Big Ten foe Purdue. For Harvard to reach its potential early and often throughout the season, it will rely heavily on Benzan, the team’s leading scorer and three-point shooter. The Wellesley, Mass. native set several Ivy League records last season, and will look to continue her prolific career for the Crimson as the team’s main contributor and distributor.

“We’re just so excited, for one to play against someone other than ourselves, but also that our first two games in Indiana are at Notre Dame and at Purdue, and those games are gonna be high intensity and high energy, just very competitive,” Benzan said. “It’s the best competition out there and the biggest test. We’re just all excited to go out there and test ourselves and see where we’re at and whether we’re in a good place and where there's room for improvement.”

While the loss of Porter and Rooks will hurt Harvard, the team will add a talented duo of freshman from the Boston area, as Maggie McCarthy and Tess Sussman will help fortify the Crimson’s depth at guard.

“We feel this is a pretty veteran team, and the two freshmen are maybe two of the quickest learners I've ever coached,” Delaney-Smith said. “They’re just local kids and they’re close with each other and close with our team because they’re local, and they just haven't missed a beat. I feel like I’m coaching a lot of returners and a pretty veteran team.”

The local Sussman also saw some now-familiar faces in her high school career.

McCarthy and Sussman will begin their careers at Harvard under the guidance of senior guards Raster and Sydney Skinner, who will serve as co-captains this season.

Raster and Skinner will play a crucial role, both as emotional leaders and as replacements for some of the scoring lost with Rooks’ departure. The graduating senior tallied 12.5 points per game last season, just a point off of Benzan’s team-leading mark, and will be sorely missed as an offensive spark for the Crimson.

A familiar face will also help shore up Harvard’s depth — forward Maria Guramare will return for her second season in Cambridge after missing the entirety of the 2017-2018 season. The Bedarrides, France, native will rejoin a frontcourt anchored by junior Jeannie Boehm and sophomore Jadyn Bush. 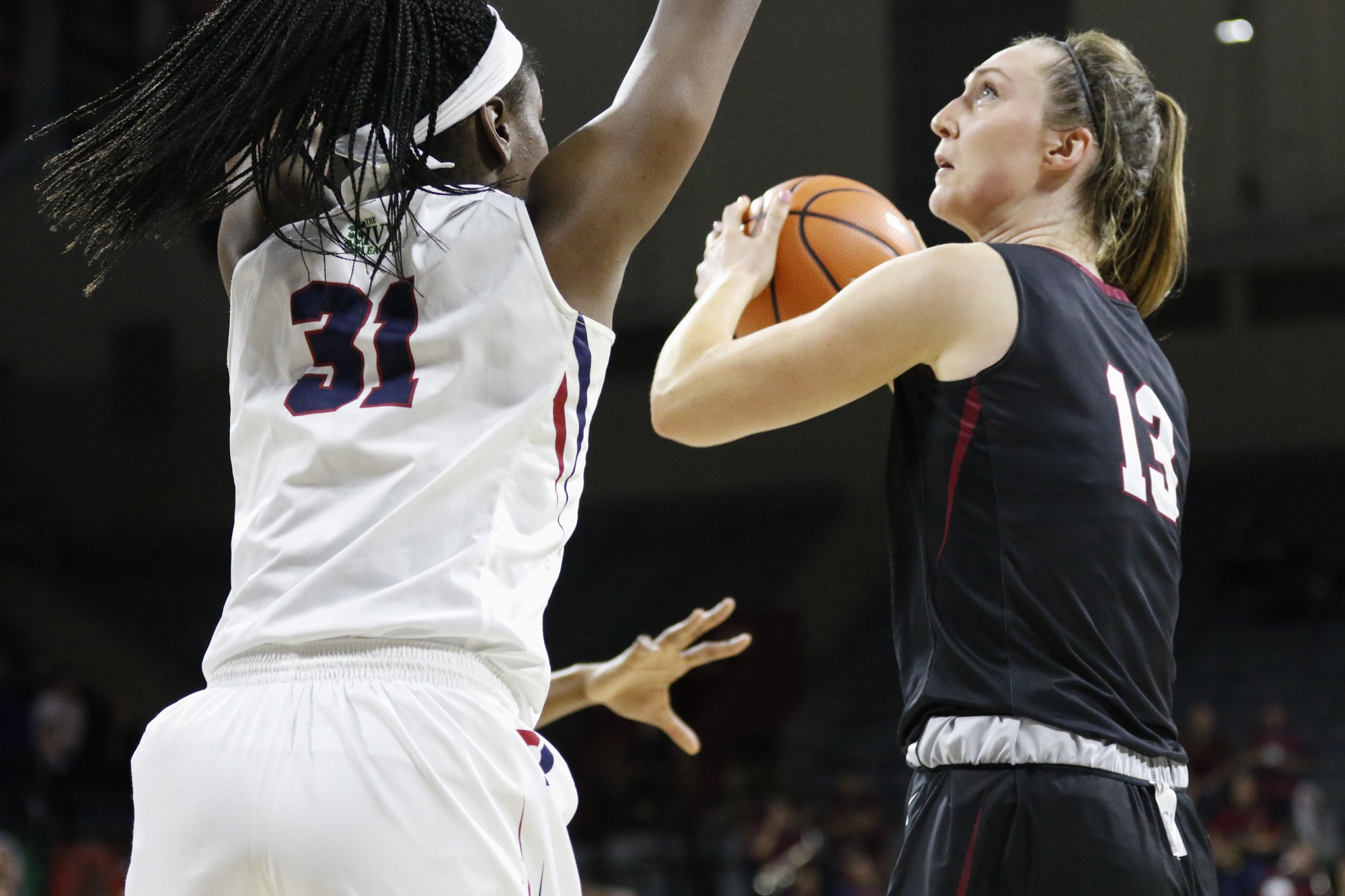 Junior forward Jeannie Boehm was named to the All-Ivy Second Team as a sophomore last year. By Timothy R. O'Meara

Boehm continued to improve in her second season for the Crimson, registering nearly 10 points per game and chipping in seven rebounds, alongside an impressive two-and-a-half blocks per contest. The junior will look to the free-throw line as a potential area of improvement — through her first two seasons at Harvard, Boehm has shot 25 percent from the charity stripe.

The squad starts the season with its tough road trip through Indiana, playing on the road against the unanimous number one team in the country in Notre Dame before traveling to Purdue. The remainder of 2018 holds a slew of non-conference opponents including Rutgers, BU, and Cal. Following the turn of the year, Harvard will head into conference play. Although they refuse to get ahead of themselves, the Ancient Eight always looms.

“I think the Ivy League is a tremendous conference to play in and it gets better and better every year, and I think it's gonna be at its highest every year,” Delaney-Smith said. “I think it's a tremendous conference to play in and I think every program in the Ivy League has a lot of positives that they can attach to their seasons and preach to their players that they have these things to go on, and that's going to make for a very exciting Ivy League conference for sure.”

Before the scheduled games, however, the team was hard at work in preparation — this year’s offseason took an international route.

“Something that was different this year is that in the last week of August we went to Spain together as a team and spent two weeks there visiting all the tourist sites,” Benzan said. “Then we played three games in Spain against three different professional teams in Madrid, Barcelona, and Valencia.”

The Crimson won all three of its matchups in the Spanish exhibition slate, showing promise for the upcoming season. Harvard also implemented some unique methods of preparation completely outside the realm of the basketball court.

“In preparation, we worked with this program that hires former Navy SEALs that leads a leadership and mental toughness program,” Benzan said. “We did that for two days working on the football field, running with sandbags on our back, lifting a log of wood, and the next morning at five am we had to go down to the pool and did some stuff down there, so it was different.”

Discipline has emerged as a strong theme for the squad this season, with multiple players echoing mental toughness this season. This sentiment starts right at the top with the returning captain.

“The big thing for us this year is the idea of discipline, and that manifests itself in a lot of different forms,” Raster said. “Last year we had a lot of good talent and the basketball skill, but it was more on the mental side where we sort of struggled, so reorienting our mindset towards more of a disciplined mindset is going to hopefully be the difference this year.”

Delaney-Smith and the rest of the coaching staff hope to see the hard preseason work pay off quickly in a tough slate of early games. Despite the anxiousness behind a new season, Delaney-Smith feels confident in her team.

“All coaches feel [at the start of the year] like they don't have everything in that they want, but I feel pretty good,” Delaney-Smith said. “I think our team is smart, I think they’re very focused, and I think they’re more disciplined than we've had in awhile, and I think that's going to lead to good things.”

Now matter how the team feels, the season is coming on November 9th. The Crimson have done all they can in preparation, and it is now time to see some different competition in games that count.

“If you ask the players, they're ready to get started,” said Delaney-Smith, echoing Benzan. “They get very tired of playing themselves.”