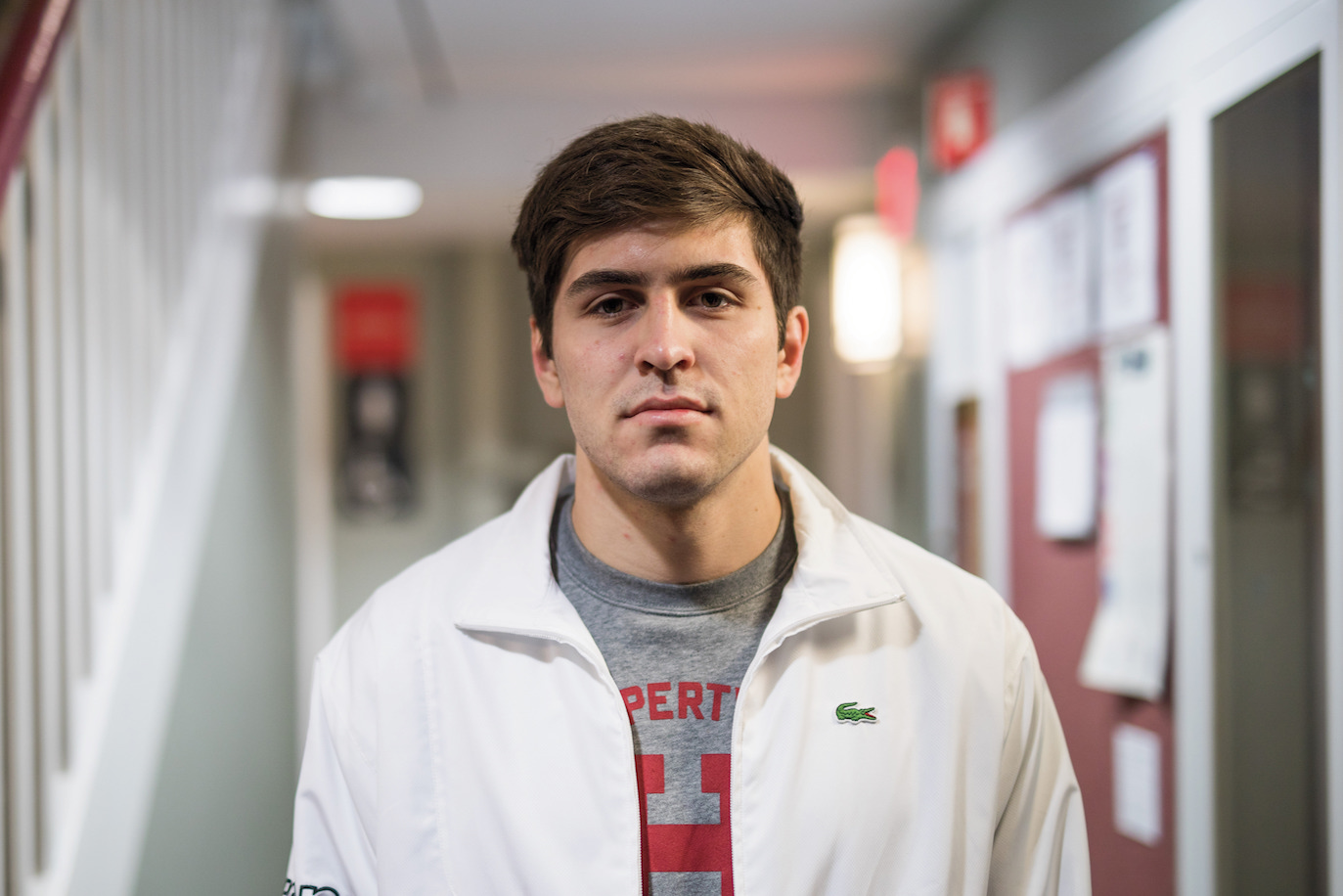 Unlike most incoming freshmen in college, Leo Tarantino didn’t spend the summer after graduating high school relaxing and sleeping in.

Tarantino was still getting up early, doing his lifts, and making sure his wrestling technique was in top form. When the Tarpon Springs, Fla., native arrived on Harvard’s campus for pre-orientation, he made sure that he had one-on-one sessions with his wrestling coaches before the rest of the team even arrived in Cambridge. This sort of level of dedication and commitment made Tarantino one of the best wrestlers in the country.

While still in high school, Tarantino and the rest of the freshman class—five rookies in total—were some of the most decorated wrestlers in the nation. They were national champions in their weight classes, won almost all of their matches in high school, and competed on some of the best teams in the country.

It’s not just about the accomplishments on the mat, though. What makes this freshman class especially unique is that the cohort has the ability to impact the future of Harvard wrestling’s culture.

Head Coach Jay Weiss recognized the excellence of this class during the recruiting process, before they were ever part of the team.

“We are very excited to have these student-athletes join our wrestling family in September,” Weiss said. “I enjoyed the recruiting process with each one of these guys, as it was clear they have the ability and character to be great on and off the wrestling mat.”

Upperclassmen and veterans on the team are cognizant of how the rookies have been transcendent as a class in respect to their character. Just a few months after the freshmen arrived on campus, captain Tyler Tarsi is already singing their praises.

“Across college athletics, it’s rare that freshmen contribute immediately to the team, but throughout preseason and the first few weeks of the season, these guys have totally bought into our program,” Tarsi said. “They’re not only great athletes but have stepped up as leaders already.”

The freshmen have realized that their age and inexperience as college athletes should not deter them from stepping up and being role models. They are also aware of how the ability to change the culture of the team can directly lead to better performances and results.

Tucker Ribman, a two-time Texas prep state champion and a native of Dallas, Texas, wants to make sure that impacting the culture of the team is one of the foremost goals of the freshman class.

Freshman Tucker Ribman will be aiming to use his expertise to elevate the Harvard Wrestling program to new heights this season. By Mia B. Frothingham

“This freshmen class really wants to make an impact on the culture and our coaches always tell us that if we have a good culture on the team, the results will follow that,” Tucker said. “That’s why one of our main goals this year is to continue to contribute to the positive culture on the team.”

These importance that character and a positive culture has on these freshmen was evident based on their priorities during the recruiting process. Tarantino, who was ranked No. 5 nationally in his weight class, could have gone almost anywhere he wanted to. He chose Harvard because of the coaching staff’s emphasis on the individual person and not just the athlete.

“I felt that the coaching staff here was a staff that really cared about you as a person before what they thought you would pan out as a recruit,” Tarantino said. “I felt the importance that our coaches put first and foremost as us as individual people. That is something I noticed here way above anywhere else, and I really took that to heart.”

Morality and personal development aren’t always prioritized by young athletes coming into a new level of competition. The fact that the freshman class prioritize the two demonstrates a clear sense of maturity.

The freshmen have also distinguished themselves by exhibiting camaraderie and teamwork. Phoenix native Bobby Groves recognizes that this companionship has led to a seamless transition to the team where the freshmen have even been capable of motivating the members of the team much older than them.

“It is important to remember that even as freshmen we can push the older guys and make them work harder,” Groves said. “Our ability to help each other out is what makes us a family.”

Along with their teamwork and character, the freshmen also have a reputation on the team for being able to have fun. On a team that stresses discipline and hard work as much as any team on campus, it is important to have a sense of humor that can lighten the mood. Pierce Bausano, a freshman whose father was a captain of Harvard wrestling, recognizes the significance of having energy and positivity on the team.

“I think the freshman bring a lot of energy,” said Pierce. “I know I myself try to integrate a sense of light-heartedness and positivity to the team.”

The freshmen have already proven themselves superb athletes across a variety of weight classes with skills sure to have a direct contribution to the team. Nevertheless, what has stood out about this class and why it can change the future of this team are the intangible aspects that cannot be measured by any statistic.

They have established themselves as the class that has discipline, exceptional character, incredible teamwork, and of course an impeccable sense of humor and positivity.