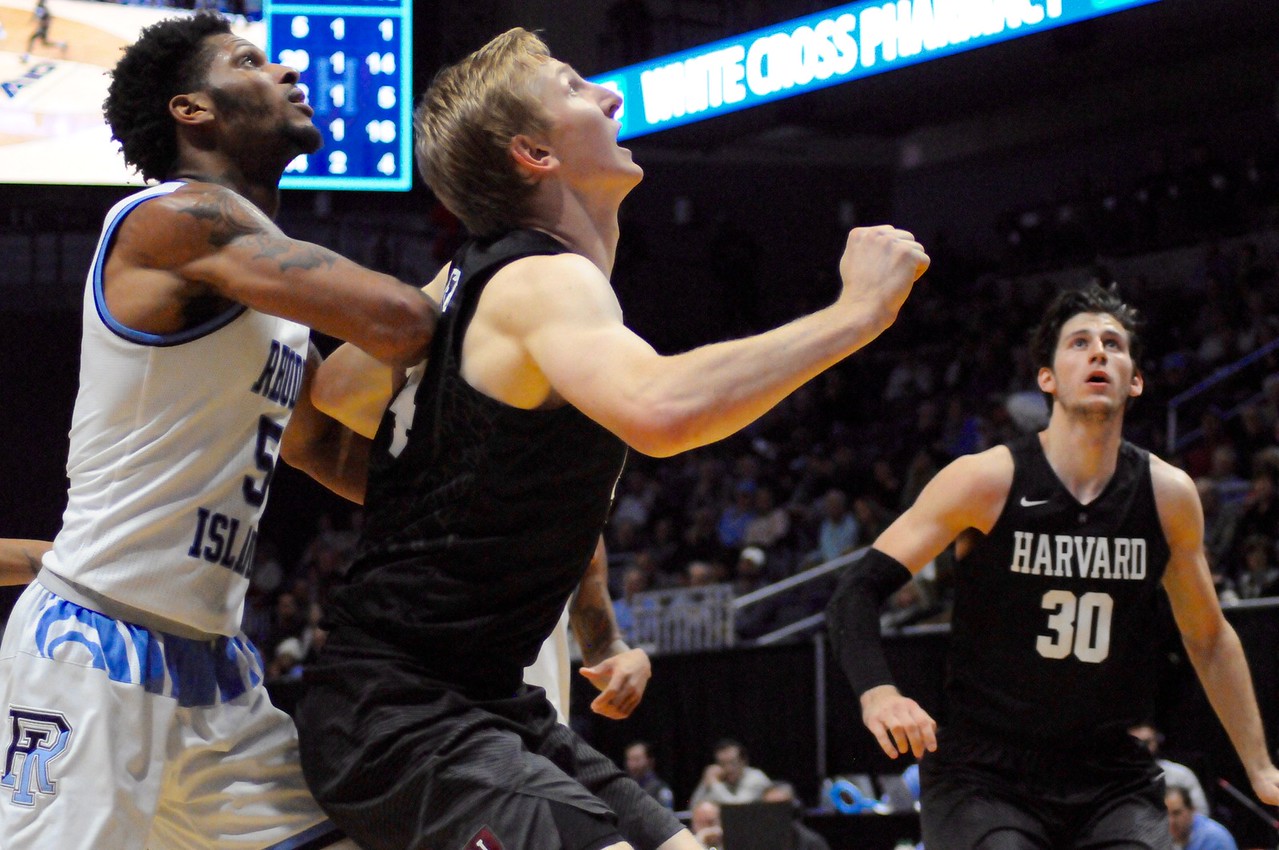 Junior big Henry Welsh had a career-high 15 points against the Gaels on Saturday. By Henry Zhu
By Joseph W. Minatel, Crimson Staff Writer

Travelling across the country for Thanksgiving break, Harvard men’s basketball split a pair of Bay Area road games. Following a close loss to San Francisco, the Crimson was able to top Saint Mary’s to cap off the California campaign.

Hoping to avoid going home without a victory, Harvard (3-3) needed to do what only one other team had done in the past three seasons: win a non-conference game on the Gaels’ home court. Such a feat could not be completed without a full and outright team effort, and the Crimson delivered just that. Even with senior captain Corey Johnson recording zero points and junior forward Chris Lewis not seeing action in the contest, five Harvard players finished the game in double-digits in scoring.

“The overall effort for all our guys [and] the front-line depth with Henry [Welsh] and Robert Baker, I thought we just had sensational minutes out of everyone and in a place like [McKeon] Pavilion], you need that,” coach Tommy Amaker said.

Harvard’s impressive scoring effort was led by junior forward Henry Welsh. Playing in his home state, the Redondo Beach native racked up a career-high 15 points and added five rebounds. Welsh was instrumental to maintaining the Crimson’s lead into the second half, hitting consecutive baskets to start the period.

Harvard shot 53 percent from the field as a team, the fourth time in six games this seasons that the Crimson has hit over half of its field goals. Adding to Welsh’s 15-point effort, freshman guard Noah Kirkwood tallied 12 points for the second straight game. Junior guard Christian Juzang, junior forward Robert Baker, and sophomore forward Danilo Djuricic each accounted for 10 points.

Harvard’s defense held tough in the first half, allowing only 24 points to Saint Mary’s (3-3). A 34-point effort going into halftime gave the Crimson a 10-point lead entering the break.

The Gaels eventually found offensive firepower, putting up 44 points in the second half. Harvard upped its own offense as well, tallying 40 points of its own in the latter period.

Saint Mary’s best chance came in the middle of the second half through an 11-1 run that cut the Crimson lead to only two. Before the momentum was completely swung in the direction of the Gaels, Harvard responded with a 6-0 run of its own. The Crimson was able to extend its lead to double-digits with just under a minute to play, allowing the clock to bleed out for the victory.

“Coming here to play against a really good basketball team and a very tough place that I’m not sure many people have been able to scrap out wins here, it just says a lot about the growth of our team,” Amaker said.

In Harvard’s first contest of Thanksgiving break, the Dons (6-0) kept their undefeated season alive with a nail-biting victory over the Crimson. San Francisco took an early lead, leaving Harvard to climb out of an early hole in an attempted comeback.

The first half was almost all Dons, with San Francisco taking a 32-21 lead into the break, a lead that was cut down by a Kirkwood triple just before the break.

Despite the Dons’ taking a 14-point lead early in the second half, the Crimson refused to back down. Slowly scraping away at the deficit early in the latter period, two free-throws from freshman Spencer Freedman finally gave Harvard the lead with 5:06 to play, the cap of a 16-5 run. San Francisco fought back, and with just over half a minute left held onto a fragile lead. Freedman’s runner to tie the game at 59 missed with 34 seconds left, and the Dons knocked down their free-throws at the end of the contest to ice the game.

“I was really pleased and proud that we fought our way and scratched our way back in it...I thought they got to the foul line a lot more than we did, which I thought was a big difference in the game,” Amaker said. “I thought their ability to get on the offensive backboard really hurt us as well.