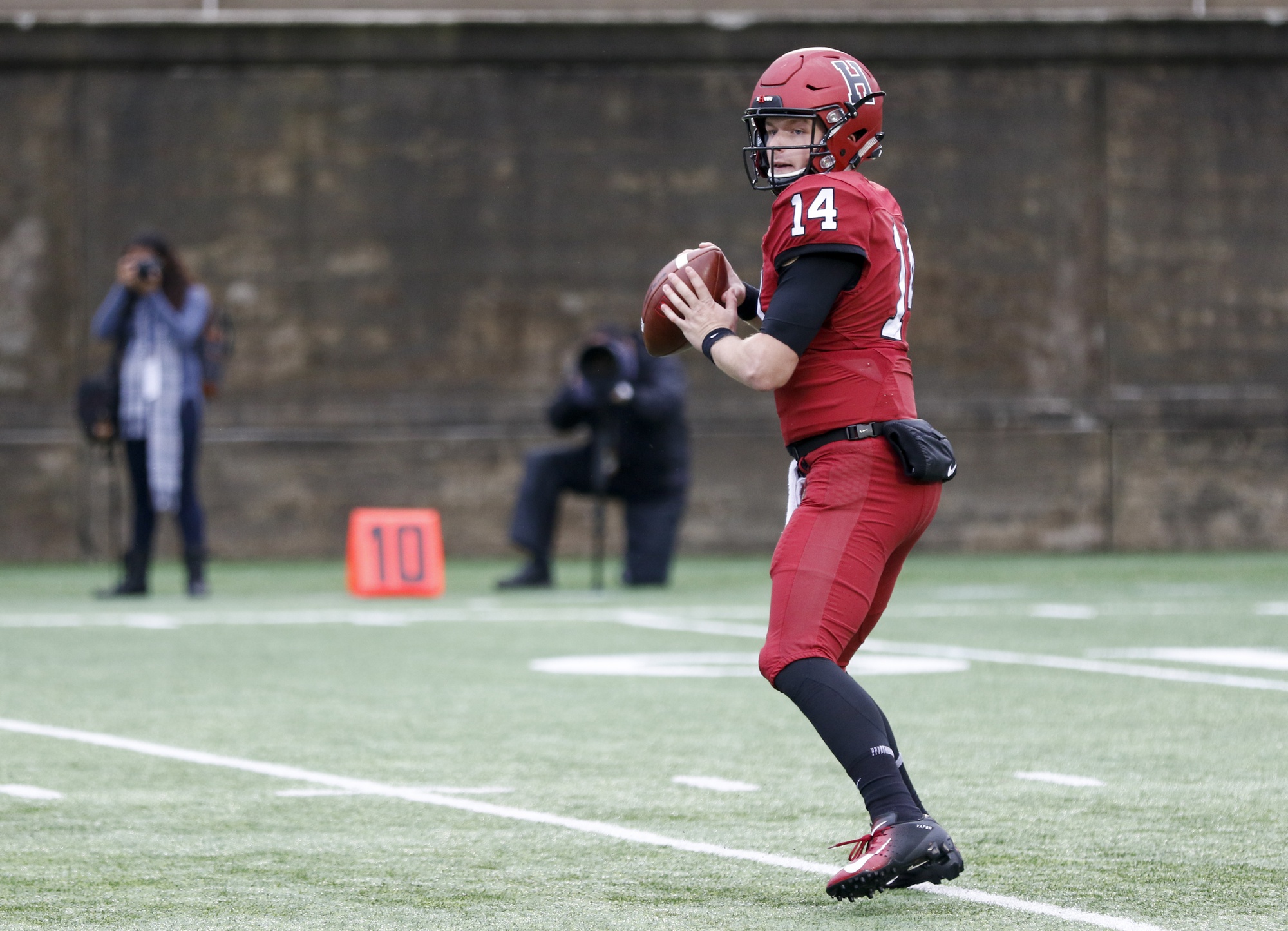 On Senior Day, a number of fourth-years shone brightest for Harvard football — but none of them more than quarterback Tom Stewart.

From the first play from scrimmage, it was clear Stewart had something special going. On the opening kickoff, B.J. Watson took the ball 55 yards out of the end zone, only to have his run nullified by a block in the back. Starting at the Crimson seven yard line instead, Stewart was determined to make up for the flag. The senior faked a handoff in the backfield and uncorked a ball that flew nearly 60 yards through the air. Junior wide receiver Jack Cook had his man beat by more than a step — the pass settled into his hands and he sprinted down the sideline into the end zone. One play, 92 yards, seven points.

Following the immediate score, Harvard did not relent in the slightest. The hosts piled on 14 more points in the first quarter and tacked on 17 for good measure in the fourth quarter, ultimately downing Columbia, 52-18. The victory levels the two teams’ overall records at 4-4 and bumps the Crimson (2-3 Ivy) over the Lions (1-4) in the conference standings.

Stewart finished the game with 15 completed passes for a whopping 393 yards. Most impressive, though, were his five passing touchdowns. The mark, achieved late in the fourth quarter, ties the most touchdowns thrown in one game in program history. The feat had been achieved thrice before, twice in 2011 by two different quarterbacks (Collier Winters ’12 and Colton Chapple ’13) and in 1953 by Carroll Lowenstein ’54.

Stewart’s top receiver was a fellow senior — Henry Taylor caught five passes for 105 yards and two scores. Taylor hauled in Stewart’s record-tying toss and also added a touchdown in the second quarter, a leaping grab at the back edge of the end zone.

The latter touchdown occurred on the first play of the drive. Four times on Saturday afternoon, Harvard led off an offensive series with an immediate strike for six. Along with Stewart’s game-opening toss, the others occurred when Stewart connected with Tyler Adams for a 75-yard trip to the end zone and when senior running back Charlie Booker tacked on the game’s final touchdown, getting the Crimson to the century mark.

“That’s the first game in a long time, probably since September, that the game hasn’t gone right down to the wire,” Harvard coach Tim Murphy said. “The bottom line is [I’m] just really happy for our team in general but especially for our seniors, such an amazing group of seniors in so many different ways, especially intangibly. They’re just always so positive. They’re always generating great energy. They’re among our best players.” 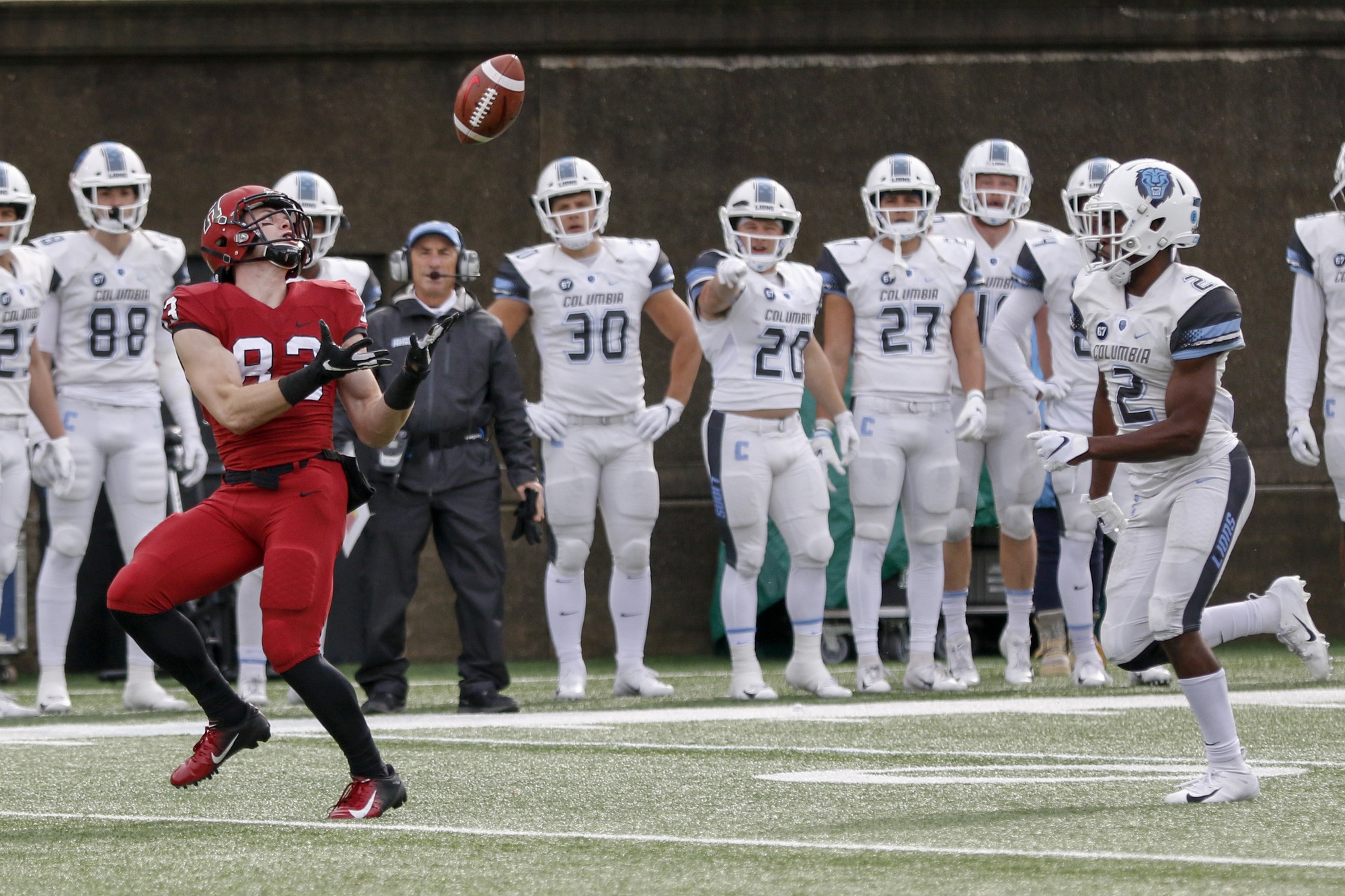 Jack Cook hauls in Harvard's first touchdown of the day. The Crimson went on to score 52 points, its season high. By Timothy R. O'Meara

The Crimson would not stop at 50. A wild sequence allowed the Crimson to add two points to its last touchdown. Jake McIntyre lined up for an extra point, only to have it blocked. The ball did not cross the line of scrimmage, however, and Cecil Williams nabbed it and dove into the end zone to record an interesting conversion.

Through one half, the rushing attack was not the focal point on a day that saw intermittent rain and violent winds sweeping into Harvard Stadium in the direction of the north end zone. The Crimson had lost 54 net yards on the ground, in part due to a botched snap on a field goal try that resulted in Jake McIntyre downing the ball all the way back at his own 21 yard line.

By the end of the game, however, Harvard finished with 103 ground yards. Sophomore Aaron Shampklin took the lead, tacking on 92 of those 103 and sprinting in for a touchdown in the third. Shampklin was part of the Crimson’s onslaught in the first quarter, albeit as a receiver. Running a wheel route out to the left, the sophomore back caught a perfectly-timed pass without much resistance from the Lions secondary and scooted 74 yards downfield for his second career receiving score.

An extreme wind whipped up about halfway through the third period, briefly slowing both sides’ offensive progress. Hats, yardage markers, pylons, and trash were blowing helter-skelter across the field. In the third quarter alone, the teams combined for five punts. This wind contributed to the run-heavy attack in the final 30 minutes. With 342 passing yards at halftime, Stewart had an opportunity to target the all-time mark of 448 (Chapple, 2011), but the elements curtailed his effort.

Unlike Stewart, Columbia quarterback Ty Lenhart struggled to connect with his wideouts on the deep ball, several times overthrowing receivers downfield. The rookie signal caller finished the contest 20-of-39 with 203 yards, one touchdown, and two interceptions. Lenhart is the fifth quarterback to play for the Lions this season as the team has dealt with a multitude of key injuries.

The second quarter took on a different character than the high-energy first. All of the first three drives of the quarter resulted in turnovers on downs. Two of those favored the Crimson, and the other was McIntyre’s mad dash to down the errant field goal snap. First, Columbia opted to go for it on fourth and two at Harvard’s 20 and came up a yard short on a direct snap run by Kyle Castner. The Lions, with a chance to redeem themselves on their next series, missed out on another three points as kicker Chris Alleyne rattled the uprights.

Columbia crossed the plane for the first time more than halfway through the second frame. To set up the score, the Lions ran a double reverse, but the ball ended up being pitched back to Lenhart. The rookie hit Emerson Kabus, who gained 103 receiving yards in the game, for a gain of 23. Two plays later, Castner catapulted himself over both sets of linemen and shoved the ball over the goal line. 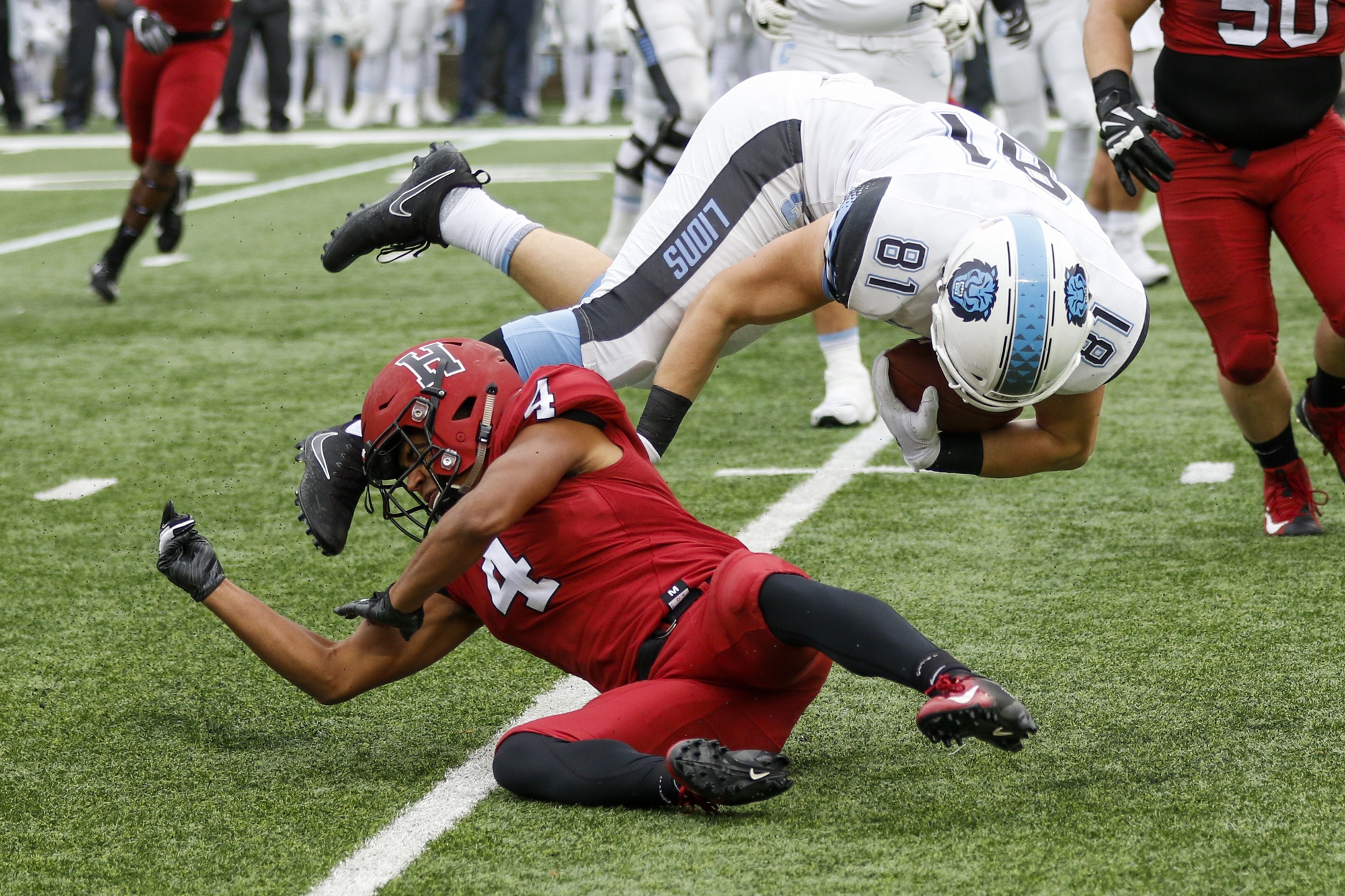 The Crimson broke a short scoring drought as the clock wound down toward halftime. Senior defensive back Wesley Ogsbury picked off Lenhart twice to deliver scoring opportunities for Harvard, the second of which saw Stewart hit Taylor on the back edge of the end zone.

“The second interception I was able to just sit there and bait him into throwing because of the defensive call, but I’ve got to give credit to those receivers,” Ogsbury said. “They’re gritty and they’re tough and that brings out the best in competition. That brought out the best in me.”

After the first pick, Ogsbury handed the ball back to Columbia receiver Kaleb Pitts, who responded by taking a swipe at the Crimson defender. Ogsbury hit the deck hard — a questionable amount of time after the hit — and the teams received offsetting unsportsmanlike conduct penalties.

On a day on which Harvard’s offense was its showcased unit, the defense flew under the radar but performed admirably. In addition to Ogsbury’s picks, captain and defensive back Zach Miller forced a fumble, the team accumulated nine tackles for losses, and linemen Brogan McPartland and Stone Hart teamed up to sack Lenhart three times.

Miller’s forced fumble ended up back in Columbia’s hands, and the Lions proceeded to score their second and final touchdown of the game on a pass from Lenhart to Pitts. The visitors had another scoring chance on their next offensive appearance, but on fourth and 17, McPartland recorded one of his two sacks by bursting around the edge and dragging down Lenhart from behind.