While the team is not content with a one-point weekend at home, it showed signs of improvement after a rocky start to the season 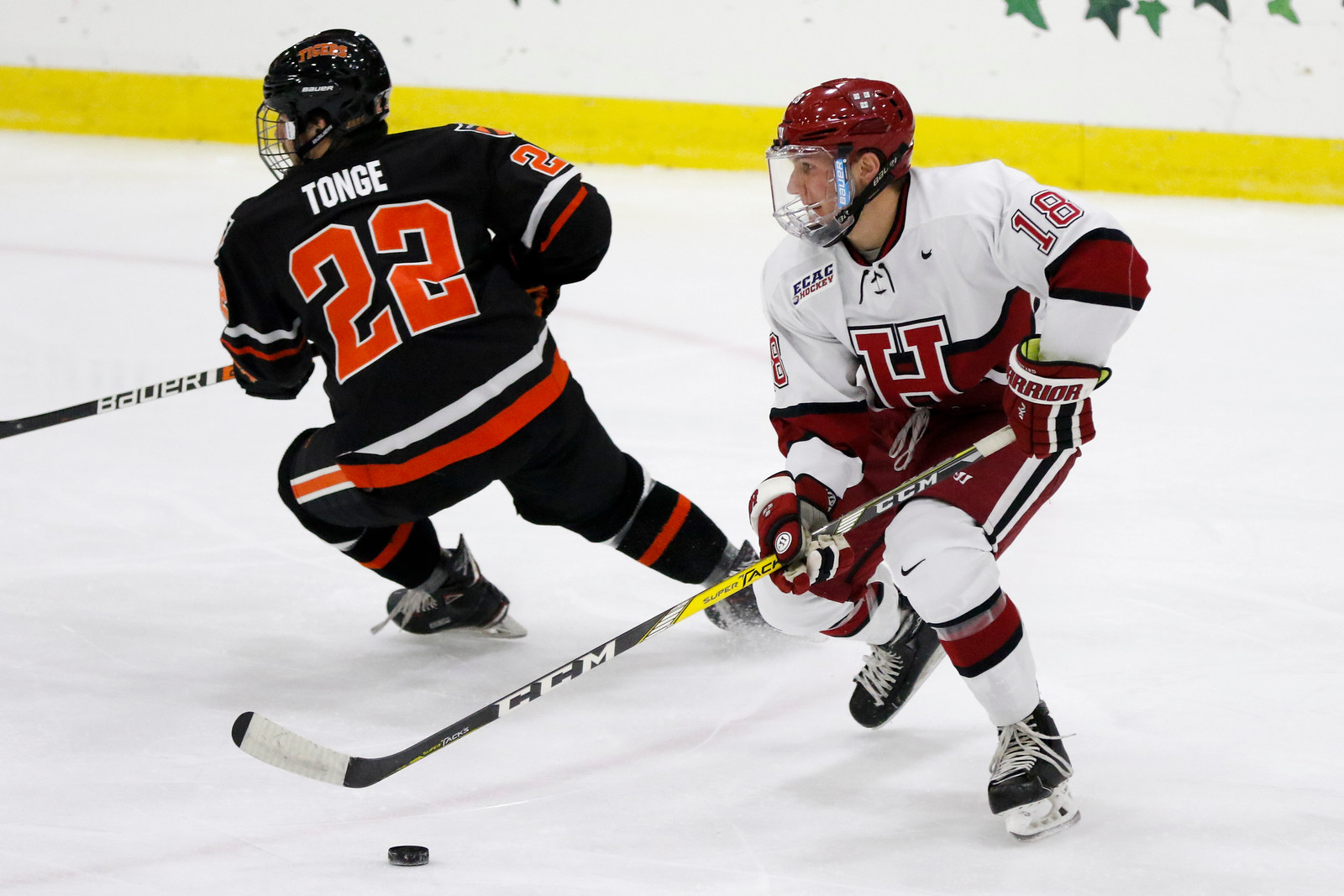 The Crimson picked up its first standings point of the season in Saturday's 4-4 draw with a ranked Princeton squad featuring two of the top scoring wingers in the country. By Timothy R. O'Meara
By Spencer R. Morris, Crimson Staff Writer

“Princeton was a good team. They pumped Dartmouth coming in, 7-1, so we knew we had to be ready,” co-captain Michael Floodstrand said. “We got a couple tough bounces there, but we did a good job of weathering it. It sucks to tie, but I think we did a good job of clawing our way back.” 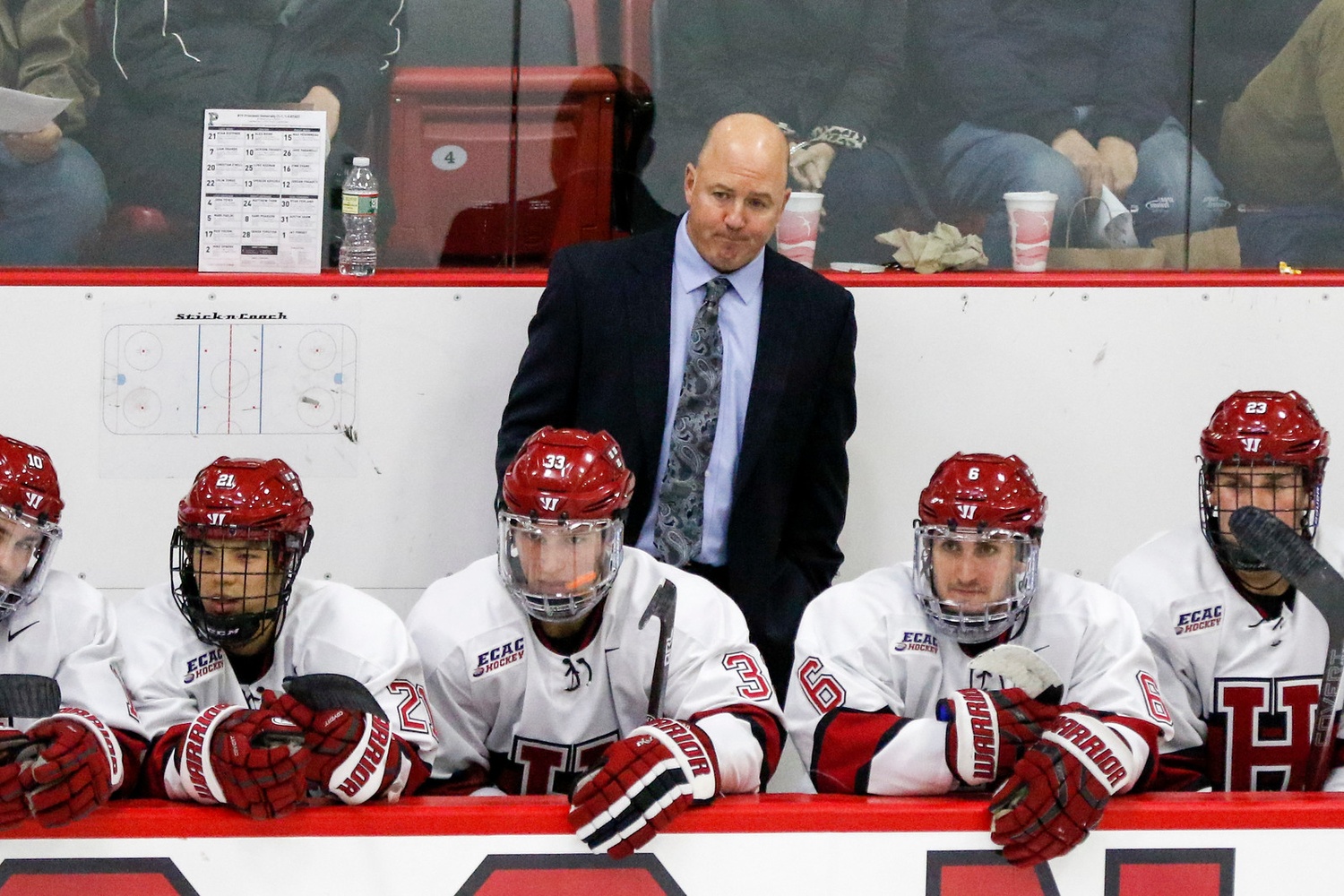 For the Harvard icemen, learning how to avoid beating themselves is as crucial as figuring out the other team. This trope has persisted since early last season. By Timothy R. O'Meara

The Ivy League rivals traded goals throughout the first two periods, and Harvard entered the third frame trailing by a goal, still in search of its first notch in the win column in 2018-2019.

“It’s always a dagger going into the third when you’re chasing, especially in this league [ECAC] when teams can really shut it down,” Floodstrand said. “The mentality was, keep going. We were outshooting them, we knew that we were kind of outplaying them five-on-five.”

Only two minutes had expired in the final stanza when freshman Jack Rathbone threw a puck toward Princeton goaltender Ryan Ferland. With multiple Crimson skaters jamming at Ferland’s pads, the puck eventually popped out to the left of the crease where freshman Casey Dornbach hammered it home, tying the game at four. 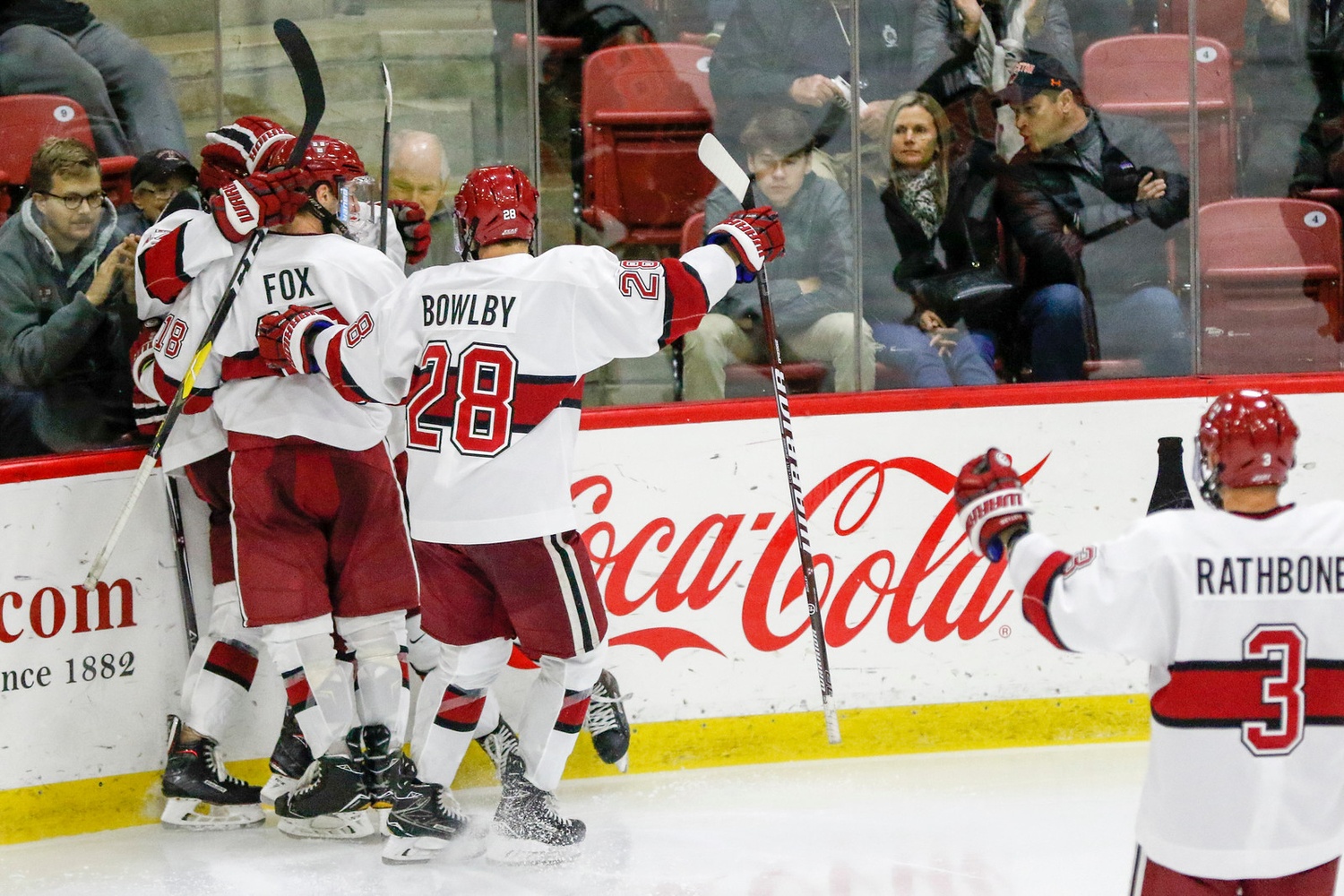 Freshman Casey Dornbach potted a third-period goal to tie the game at four goals apiece, where it would finish. By Timothy R. O'Meara

After a staggering five powerplay goals against Dartmouth last week, Harvard’s man-up unit was held off the scoresheet in Friday’s 5-3 loss to Quinnipiac. In the second period on Saturday, the Crimson once again produced on the man-advantage, as blue-liners Adam Fox and Reilly Walsh reminded fans, coaches, and players alike how dangerous they are in the offensive zone.

Fox began the sequence, receiving the puck at the middle point and toe-dragging his way around a helpless defender. With all eyes on the junior’s dazzling hands, Fox dished a backhand pass to an open Dornbach, who found Walsh on a low-to-high pass through traffic. The sophomore ripped a shot that skimmed freshman Jack Drury on its way to the back of the net.

Overall, the Tigers ran away with the special teams battle, as alternate captain Ryan Kuffner potted his second man-up goal of the night — an in-close redirect off the heel of his stick blade, eerily similar to his first — after Topatigh’s tying strike.

“We’re still searching for the understanding of how not to beat ourselves,” Harvard coach Ted Donato ’91 said. “We gave up a goal on our powerplay and we gave up two shorthanded goals, but I give our guys credit for battling through that.”

For the Crimson, the trend of untimely goals against — particularly at the beginning of periods — continued on Saturday night. Less than four minutes into the tilt, Princeton senior Max Véronneau gained possession of the puck off a center-ice faceoff. The alternate captain ripped a shot along the ice and beat senior net-minder Michael Lackey five-hole.

“The first [Princeton] goal, I don’t know if that’s a great scoring chance,” coach Donato said. “I think we probably want that back from a goaltending standpoint.”

Véronneau, always an offensive threat, finished with four points (1–3—4) on the evening. 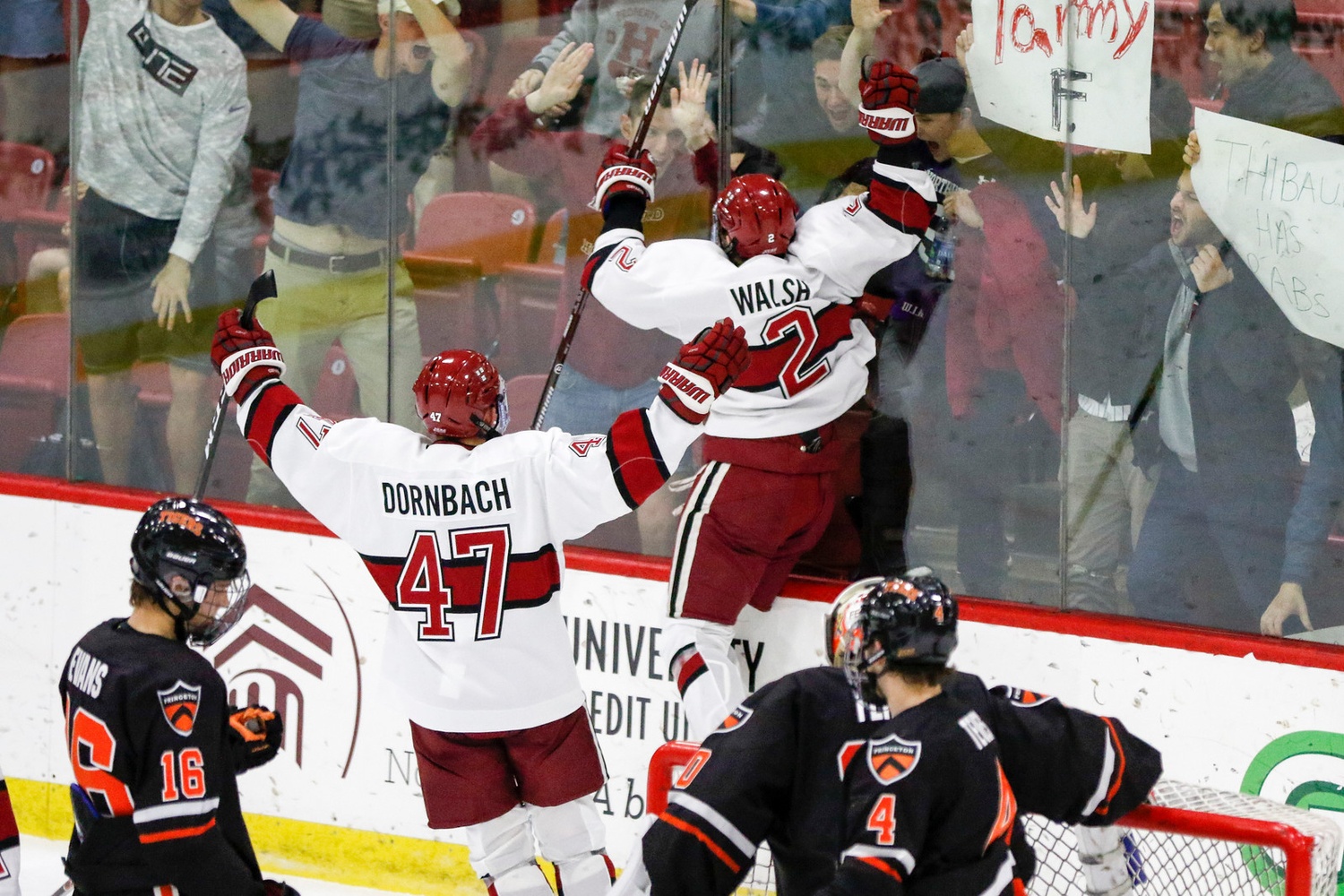 Sophomore defenseman Reilly Walsh's point-shot powerplay goal was ultimately awarded to freshman Jack Drury, whom the puck skimmed on the way into the net. By Timothy R. O'Meara

Unlike Friday’s contest, in which Harvard found itself in a multi-goal hole early on, the home team was able to notch the score less than two minutes after the Tigers tally, tilting the ice back to neutral.

Sophomore Jack Badini took the puck around the back of the cage before dishing to Rathbone at the point. The rookie fired a one-timer through traffic and found twine.

Not only did the Crimson even the ledger, but two minutes later it seized control of the game thanks to a hard drive to the net from sophomore forward Henry Bowlby. Ultimately, the opening period finished tied at two goals after Kuffner struck on the power play, but importantly, coach Donato’s group showed resiliency after allowing an early goal.

“We stressed — we were hoping — that [an early goal against] wouldn’t happen,” Dornbach said. “That’s something we have to work on. It always makes it tough when you’re chasing the game like that. Hopefully we can start getting some first goals, but I thought the guys worked hard [after conceding the first goal].” 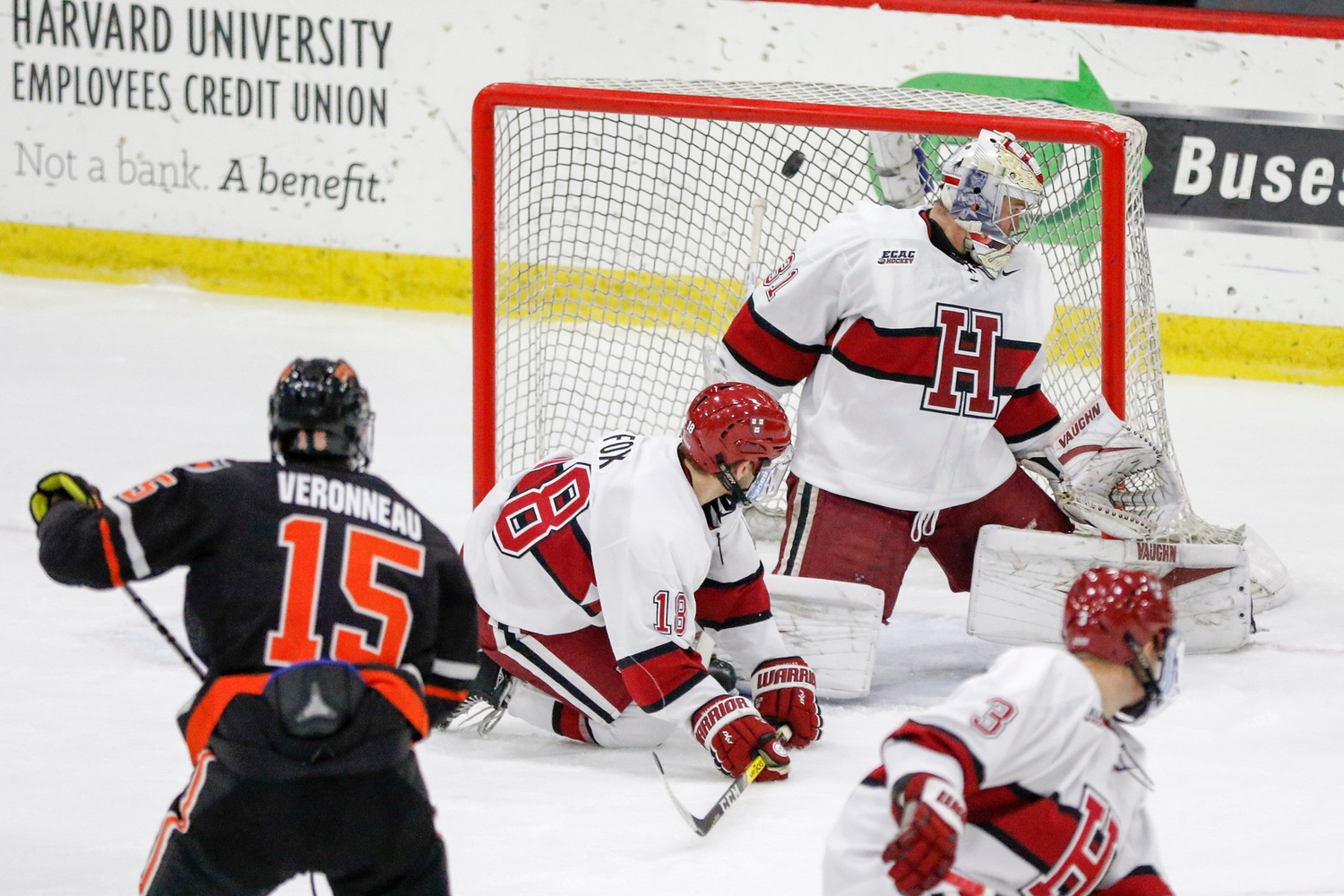 Saturday night saw Lackey regain his spot between the pipes after coach Donato, dissatisfied by Lackey’s seven goals allowed last week, gave the nod to junior Cameron Gornet on Friday. While his numbers (4 GA, .826 SV%) may not jump off the page, the senior backstop kept his team in the game and showed bursts of promising net-minding.

“I thought Michael battled,” coach Donato started. “I think much like our team’s game, it looked better but there’s still room for improvement and still areas we can be better. But I liked the fact that he came out and was really battling…. When all is said and done, I think he’s got a better game inside of him, and I think he would tell you that.”

Harvard’s goaltending situation will continue to develop as the season progresses, with the starting role very much still up for grabs while the goals against remain abundant.

Two freshmen, Drury (1–1—2 tonight) and Dornbach (1–2—3), netted their first career goals on Saturday night. Another rookie, Rathbone (1–2—3), added to his productive weekend with a strike of his own. In total, freshmen accounted for eight of the Crimson’s 12 points on the scoresheet and three of the team’s four tallies.

Prior to the tilt, coach Donato jumbled the lines quite significantly but left the pairing of Bowlby, Drury, and Dornbach from Friday night intact. The early chemistry starting to form between the trio will be key in establishing Harvard’s ideal line combinations moving forward.

“It’s just kind of part of the game and part of our team,” Floodstrand said. “The lines kind of shifted up a little bit, which is great…. It’s always super helpful to kind of get those changes and spark a little bit of excitement.”