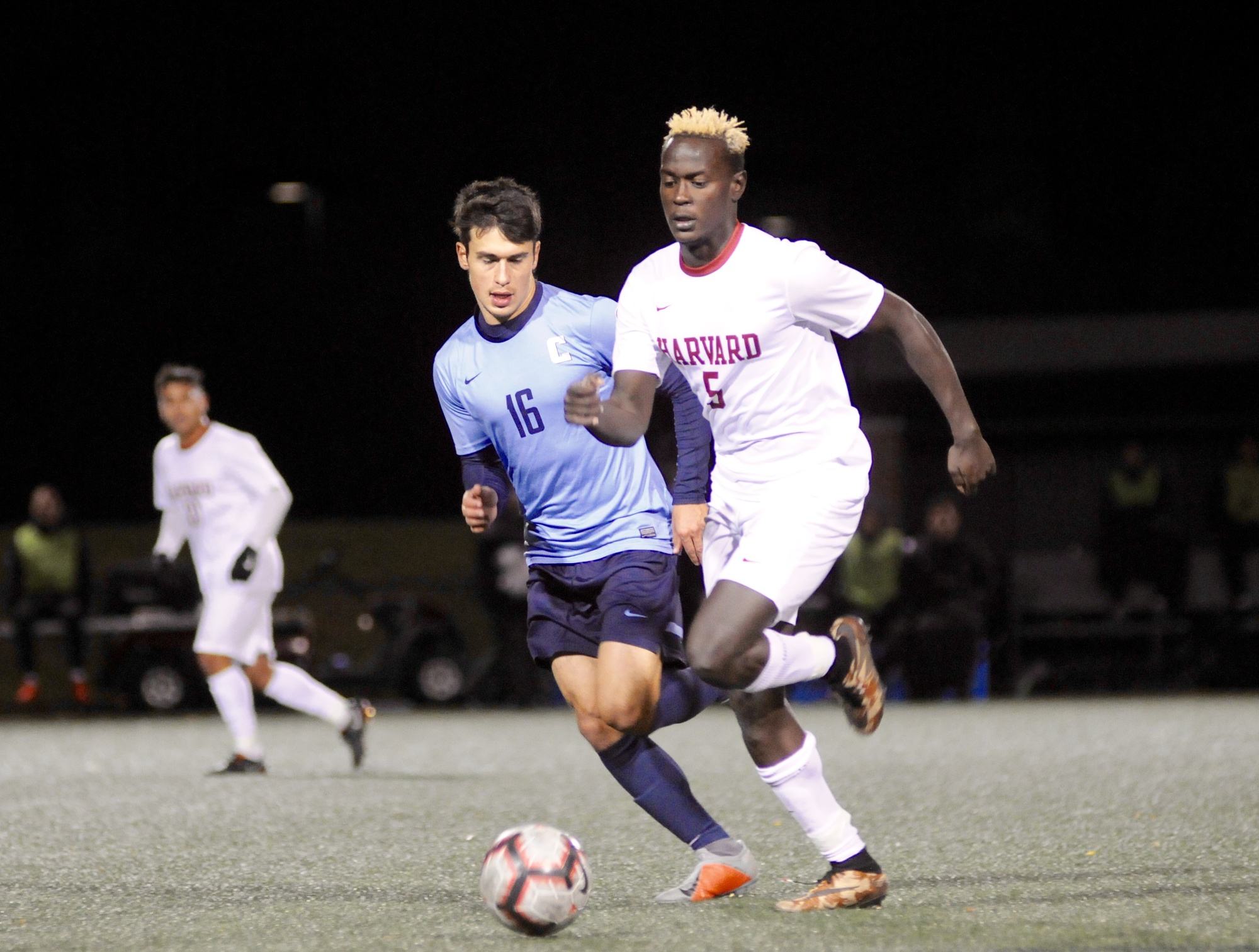 The Harvard men’s soccer team (3-12, 1-5 Ivy) dropped a close game to a strong Columbia (10-4-1, 5-1) squad on Saturday by a score of 2-1. For the third game in a row, the Crimson was faced with less than ideal weather. The Crimson played in fairly windy conditions on its Senior Night after enduring hail and rain in Hanover, N.H., and cancelling a game against Northeastern due to lightning.

This is the fourth season in a row in which the Columbia has had ten or more wins in a season. The Lions are now in the running for the Ivy League title. They can win if first-place Princeton loses or ties against Yale in its final game of the Ivy League next weekend and if Columbia defeats fourth-place Cornell.

Within minutes of the opening whistle, Lions senior Dylan Mott scored a goal that quickly changed the momentum of the game. The goal-scoring play started when sophomore defender Blake Willis threw the ball in on the left side of the field to freshman midfielder Sebastian Gunbeyi. Gunbeyi collected the ball near the end line and sent a left-footed cross to Mott who was left alone in the box. Mott sent the ball into the net, right underneath the crossbar.

Harvard responded by going on the offensive. In the 33rd minute the Crimson scored a tying goal on a penalty kick. Senior forward Cesar Farias Jr. scored his third goal of the season by firing a shot past Columbia senior goalkeeper Dylan Castanheira.

“I thought throughout the game, especially in the second half we started to dominate possession and I think we went on our front foot a little bit, which was obviously great to see,” said Harvard junior midfielder Taner Dogan. “The result was not what we wanted and we kind of lacked creating those clear cut chances in the final third and being clinical with our finishing, but we definitely had some positive takeaways from it. I think the last couple games kind of put together some stretches of domination on the ball and everything. But obviously the next step is to translate that to goals and results.”

The next goal did not occur until the second half. In the 51st minute of the game, the Lions earned a corner kick. Willis’ kick sailed into the box where Mott and freshman midfielder Andrew Stevens were waiting to get a head on it. Mott was given credit for the game-winning goal.

The action did not end there, though. There were several more attempts from both sides before the final whistle was blown.

Minutes after Columbia’s second goal, the Lions used their momentum to generate another possible goal-scoring opportunity. Junior John Denis created a 2-on-1 opportunity near the Harvard goal that was stopped by a foul on Harvard sophomore Fernando Docters just outside of the box. Denis took the kick, but the shot went wide right of the goal.

In the final minutes of the game, the Crimson had several attempts to tie the score up. One of them occurred in the final seconds of the game. Harvard drew a corner kick that was floated into the box, but the kick was saved by Castanheira before any Harvard player could get a piece of it.

Overall, the Crimson had eight shots, half on goal. Six of the eight shots were attempts from first-years. Harvard sophomore goalie Matt Freese recorded three saves in the match. Freese leads the Ivy League in saves per game with an average of 5.25.

“The younger players in the group have been a very important part of the team this year,” sophomore midfielder Paolo Belloni-Urso said. “They provide a lot of quality going forward and looking ahead we can see that this program has a bright future.”

Currently, the Crimson sits in last place — however, with help from the teams at the top of the Ivy League standings, Harvard could finish the season in fifth. The Crimson would have to beat seventh-place Penn and both Yale and Brown would have to lose to Princeton and Dartmouth, respectively.

“With the seniors and everybody involved we definitely want to finish out on a high,” Dogan said. “I think if we can go and play the way we have been playing in terms of calmness on the ball and willingness to play and combine that with creating a little more clear-cut chances in the final third...we are definitely in a good position to get results and finish our season on a positive.”