Women's Soccer Sends Out Seniors with Win Over Columbia 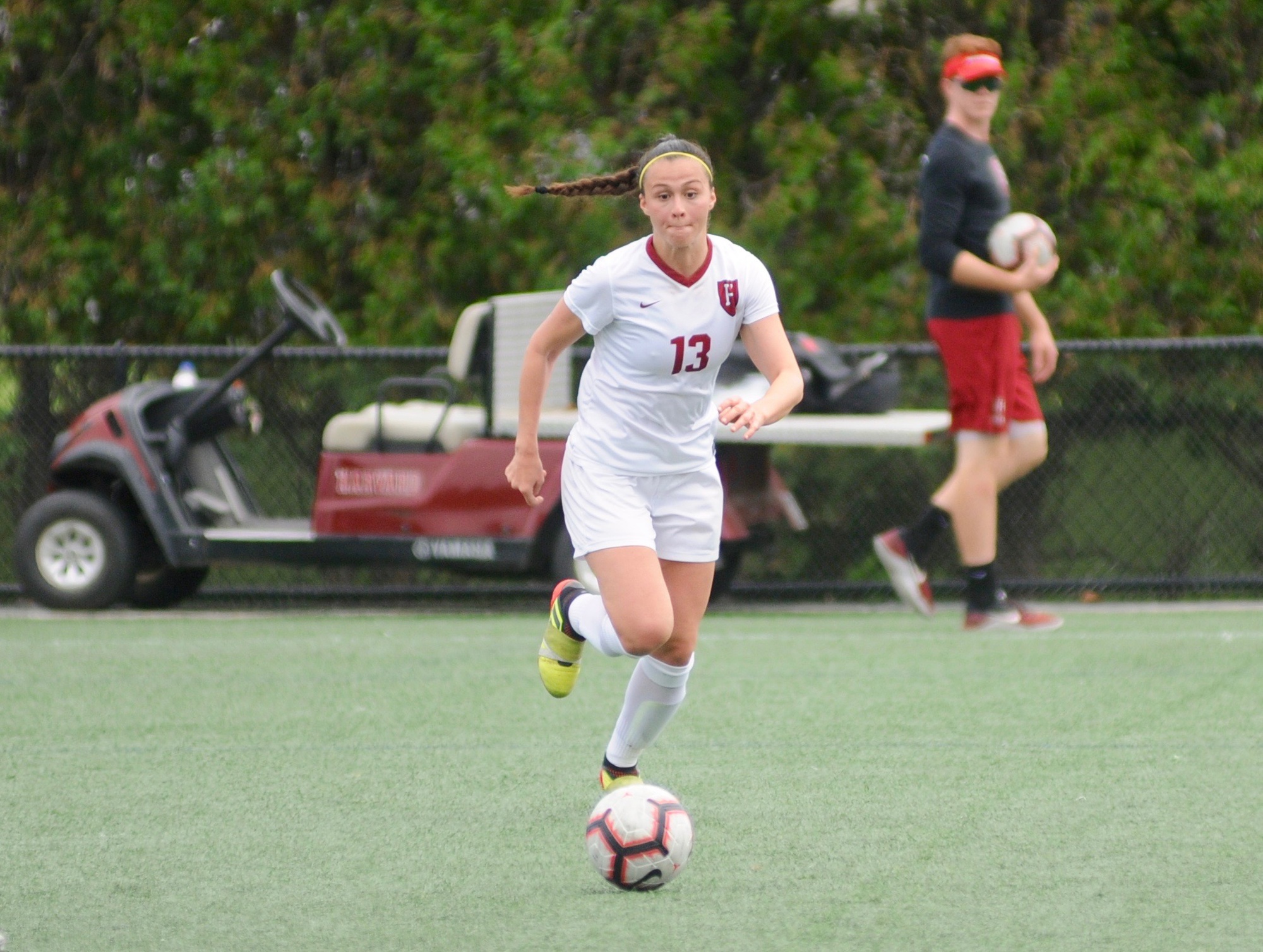 Senior midfielder Leah Mohammadi finished the season with a team-high seven goals, marking the second straight season in which she led the Crimson in scoring. By Henry Zhu
By Bryan Hu and George Hu, Crimson Staff Writers

As the Harvard women’s soccer team prepared to kick off against Columbia in its final game of the season, every single outfield player in the graduating class had scored a goal in their collegiate careers—with the exception of one.

Last Saturday at Jordan Field, senior forward Alli Wiggins changed that, powering her side to an early lead with her first career goal in her final collegiate game.

A stray ball in the 11th minute gave Wiggins the opportunity to put herself on the board. The Methuen, Mass., native collected the ball on the right side of the box and fired a low shot past Lions senior goalkeeper Sophie Whitehouse off a deflection, giving the home team an early 1-0 advantage.

“The ball was bouncing around the box, and fortunately landed right at my feet,” Wiggins said. “I knew I had a pretty good shot, and took it. It was great to put the team ahead in a game that meant so much to us.”

On a Senior Day teeming with emotion, the Crimson took that spark and overcame the Lions, 2-1.

“They’re just great people,” said head coach Chris Hamblin, having just finished his third year at the helm of the team. “They always put the team first. They’re always going to give their hearts every single day. They’re moving on to their next phase in life, but they’ve really given us so much, and hopefully they’ve taken a real positive out of their time here.”

Together, the senior class has seen its fair share of highs and lows, having won the Ivy League title and earned a bid to the NCAA tournament in 2016, but also having finished in the bottom half of the conference table in 2017. The graduating class of 2019, however, was able to end its time in Cambridge on a high note, capping a 7-7-1 roller-coaster 2018 regular season with a win.

The new-look Harvard squad got off to a 2-4 start in 2018, showing flashes of gelling but more so inconsistency, before busting out a huge 2-0 win over Northeastern in mid-September and setting the stage for a midseason renaissance.

The Crimson then got off to a roaring start in conference play, starting 3-0-1 and pushing its overall record to 6-5-1 before cooling off in late October. The squad proceeded to settle for a .500 overall record and a 4-2-1 Ivy mark, good enough for a tie with Dartmouth for third amongst the Ancient Eight. The Lions (8-7-1, 1-4-3) finished fifth.

On a windy Saturday afternoon, Harvard certainly came up clutch in the final game of the season. After Columbia tied the score in the 17th minute, the two sides went back and forth until a golden opportunity opened up later in the game on the counterattack for the Crimson.

Fed by an adept interception and clearing pass by junior midfielder Meg Tveit in the 79th minute, Mohammadi sprinted half the field with the wind at her back, finding sophomore forward Murphy Agnew with a through pass to the left side.

Agnew buried the shot for her second goal of the season and first game-winner, as the score proved decisive in giving Harvard a 2-1 lead.

“I just saw the goalie was off her line, and if I had taken another touch, she would have been there, so I just took one touch,” Agnew said. “It hit the back of the net...it’s so exciting because I really wanted to win this game.”

With heavy gusts of wind in the face of the Columbia attack, the Crimson defense was able to prevent any realistic scoring opportunity by the Lions in the closing minutes.

Columbia ended up outshooting Harvard 10-9, though both sides made three saves. The Crimson committed 11 fouls to the Lion’s four.

Lions freshman midfielder Jessica Schildkraut scored the first-half tying goal off of a rebound off the crossbar for her third goal of the season to make it 1-1. Fighting the wind, Columbia couldn’t fend off Harvard in the second half.

As the final horn sounded, so too did the curtain come down on the season.

Mohammadi led Harvard on the season with 17 points with seven goals and three assists, while Hirst, Agnew, and freshman Taylor Nielsen combined for eight goals and nine assists.

For all the uncertainty that surrounds incoming rookies, the platoon of freshmen produced fantastically for the Crimson, as nine of the team’s 19 goals were scored by first-years. The rookies were also instrumental in joining veteran defenders like Tveit on the backline, providing security for Etzel in goal.

Freshmen Trinity Thomas, Jillian Wachira, Jordan Di Verniero, and Lara Schenk, in addition to Nielsen and Hirst, all had their moments in significant playing time.

Etzel, closing a season with a career-best five individual shutouts over 1000 minutes played, got the win to move to 7-5-1. Etzel posted a career 0.99 goals-against average and made 119 career saves.

Harvard, picked to finish fifth in preseason predictions, performed better than the polls expected, but were perhaps inconsistent all season long. Though its mainstays are graduating, Harvard’s core of returning talent is formidable enough to become a consistent force in 2019 and beyond.

On Saturday, Mohammadi said she “just knew” Agnew would bury the game-winning shot in her post-game interview. Her words of confidence were not just in regards to on-field performances—the team’s leader has confidence in what the squad can do moving forward.

“They’re going to have a strong foundation to build on for the future,” Mohammadi said.

— Staff writer Bryan Hu can be reached at bryan.hu@thecrimson.com.