Men's Hockey Overcome at Home by No. 16 Cornell 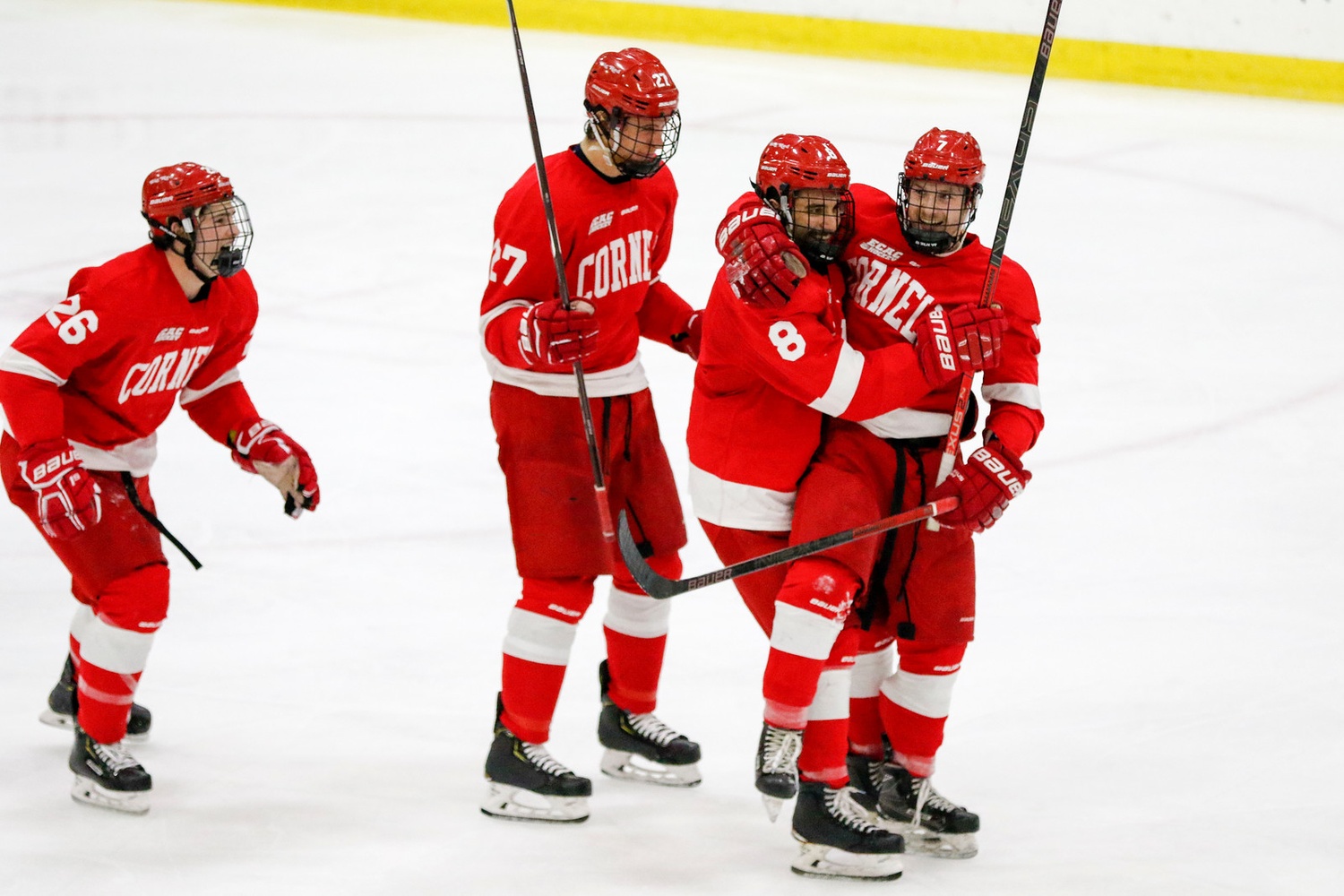 No. 16 Cornell dominated the second period en route to avenging Harvard's win one week prior. The teams will also meet at the Big Red's Lynah Rink in January. By Timothy R. O'Meara
By Stuti R. Telidevara, Crimson Staff Writer

Coming into Saturday’s big rivalry matchup with No. 16 Cornell, the Harvard men’s hockey team had the country’s best power play unit and fourth-best goals per game. The Big Red, despite its ranking, sat near the bottom of the NCAA in terms of penalty killing. As the contest played out, special teams were a factor — but in an unexpected way.

Cornell (6-5-0, 4-2-0 ECAC) outlasted a late push from Harvard (4-4-2, 2-3-2) to emerge with a 2-1 victory after going 2-for-4 on the power play. In fact, all three tallies in the game came on 5-on-4s. Despite the best efforts of senior net-minder Michael Lackey, the Crimson fell short after Friday’s decisive win, losing out on what would have been its first four-point weekend of the season. This loss is the home team’s last conference clash of the season, and comes just a week after it played spoiler to a Big Red-leaning crowd at Madison Square Garden.

“I thought we came out pretty strong,” co-captain Michael Floodstrand said. “[But] I think we kind of took our foot off the pedal a little bit late in the first, got dominated in the second…. Against a good team like that, they can just shut it down.”

The Crimson has had starting trouble often this year, but began the contest with jump. Instead, it was in the second period that the team faltered. Cornell piled on 19 shots to Harvard’s four in the middle frame after falling behind 1-0 in the first. 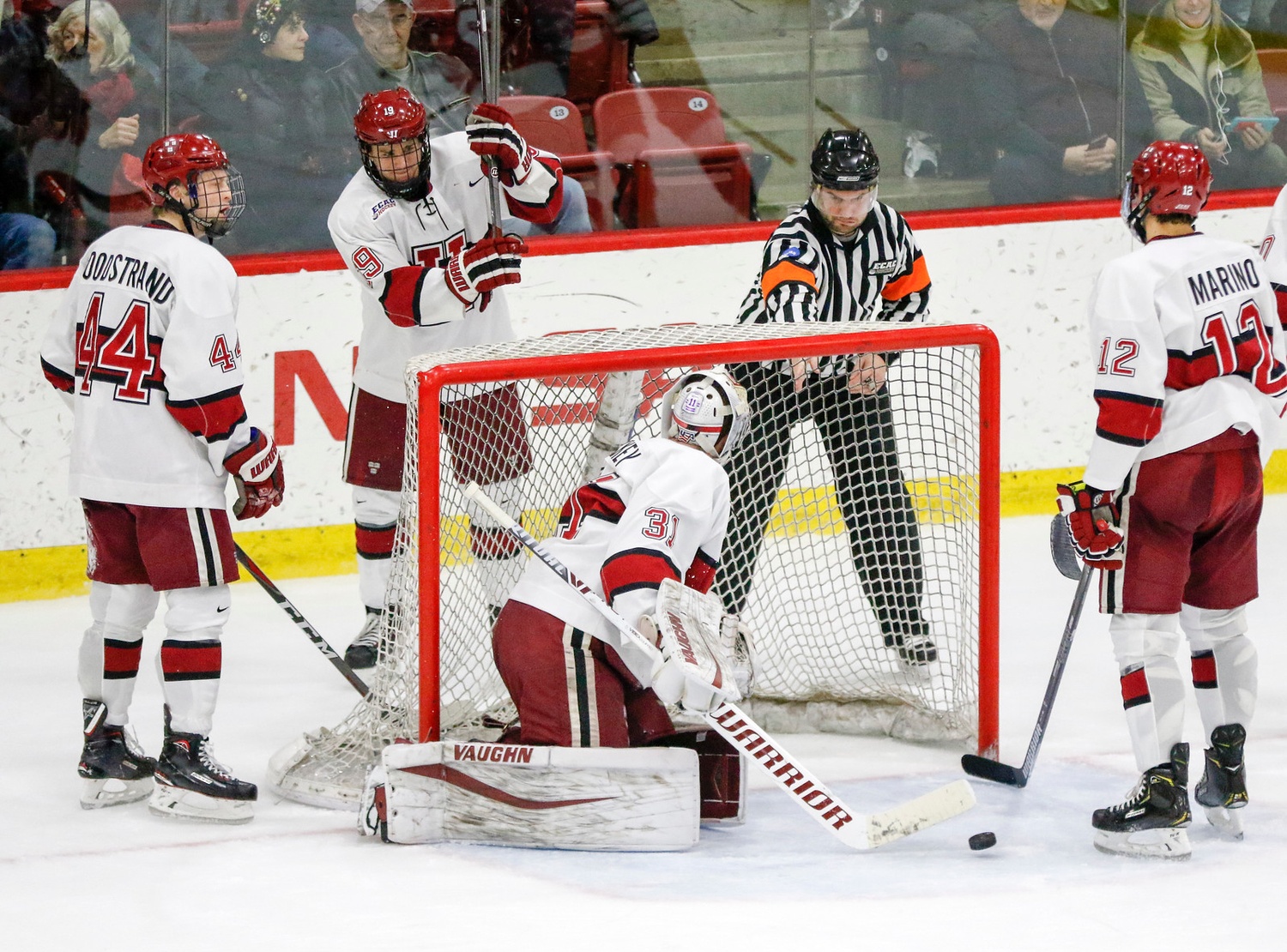 After the Crimson looked like the better team through the game's first 10 minutes, the Big Red stole momentum and potted a pair of powerplay strikes in the second period. By Timothy R. O'Meara

Two of those attempts were on the money, and came on remarkably similar attempts. Both were power play scores from in front of the net; the first was notched by sophomore forward Cam Donaldson, and the second came from the stick of classmate Tristan Mullins on a net-mouth scramble. The Crimson gave up three penalties in all that period while drawing zero — a considerable blow to a bottom-four penalty-killing team, as Harvard is. This dramatic momentum swing proved too much for the hosts to recover from.

“The second period, I didn’t think we played with a lot of poise,” said head coach Ted Donato ’91. “Took a couple of unnecessary penalties, we got beat back at the front of our net…. They were more determined, certainly, in the second period than we were, and that was the difference in the game.”

In the third period the tables turned somewhat in terms of pressure, as the Crimson outshot the Big Red 10-1 and prevented the visitors from getting a shot on net until over 13 minutes into the frame. Harvard also saw two man-advantage opportunities, the second coming with less than four minutes left in regulation. But it could not convert on either, and pulling Lackey for the extra attacker also proved fruitless.

The Crimson’s lone goal came at the 5:30 mark of the first period, on its very first power play attempt. As the second unit set up, junior forward Colton Kerfoot swept a pass to rookie defenseman Jack Rathbone at the left point. With Harvard skaters screening the Cornell goalie, Rathbone fired a shot that went right through the crowd and to the back of the net. The freshman’s tally extends the man-advantage unit’s streak of eight straight games with a conversion, and keeps its efficiency at the top of the NCAA. 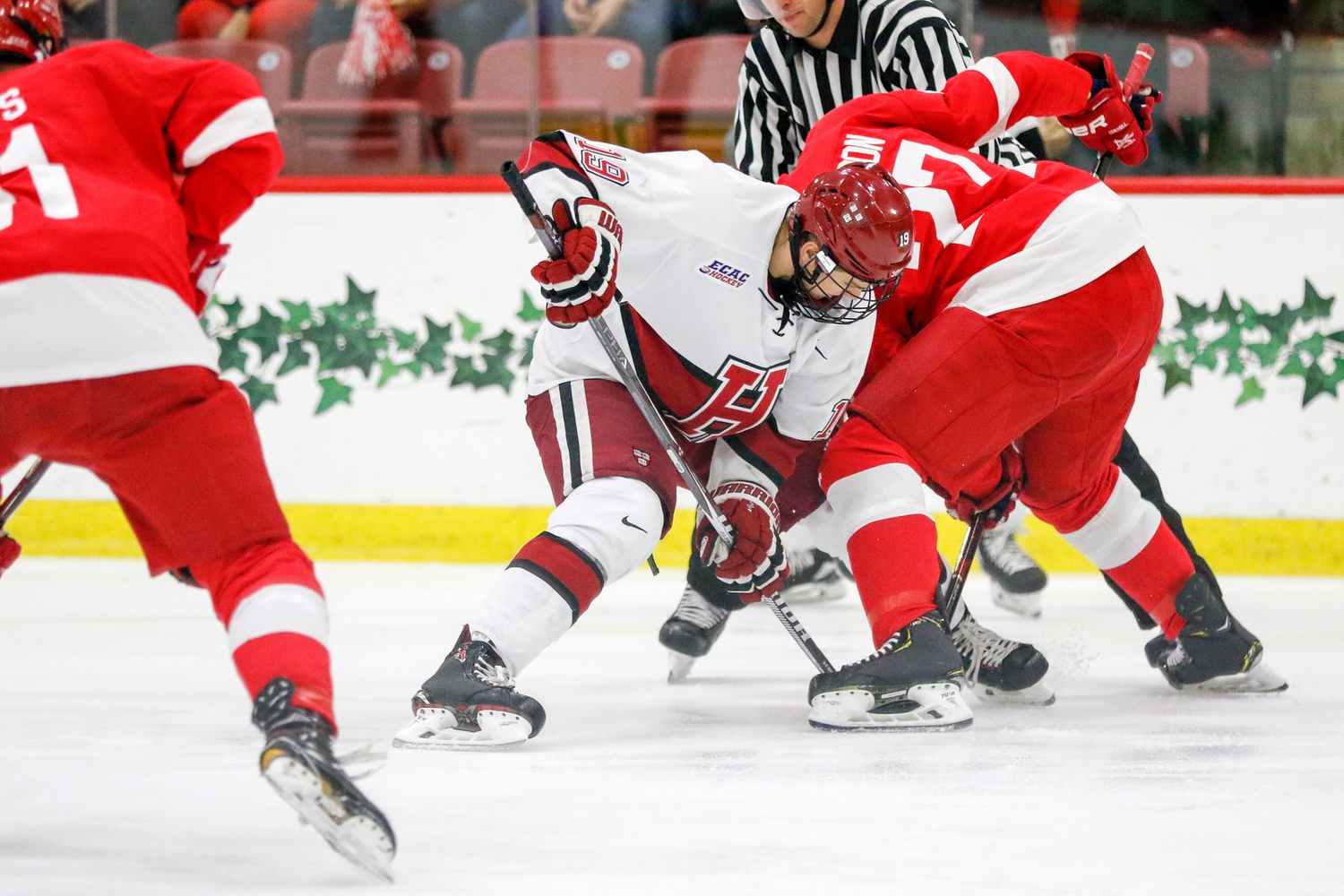 Both rivals entered Saturday's matchup with Harvard's victory at Madison Square Garden one week prior still fresh in their memories. By Timothy R. O'Meara

But Saturday’s game also marked the end of several players’ point streaks. Junior defender Adam Fox, the team’s points leader, saw his season-long point streak grind to a halt, while sophomore defenseman Reilly Walsh and co-captain Lewis Zerter-Gossage did not notch a point for the first time in seven and five straight respectively. The offense, however, was not coach Donato’s primary concern after the loss.

“I’m not as concerned about the [lone] goal as I am about our overall effort,” coach Donato said. “You’re not going to win a lot of games with 24 shots. We got the goal early, but we...can’t look in the mirror and say that we played our best or that we deserved to win.”

The Big Red, for its part, turned around its game after last week’s loss. The team has been plagued by the injury bug already this season, with several key contributors unable to dress against the Crimson. One big absence was sophomore goaltender Matt Galajda, who did not play at all this weekend after an injury sustained at Madison Square Garden. Instead, rookie Austin McGrath stepped up between the pipes — and played to his first win, stopping 23 of 24 attempts thrown his way. 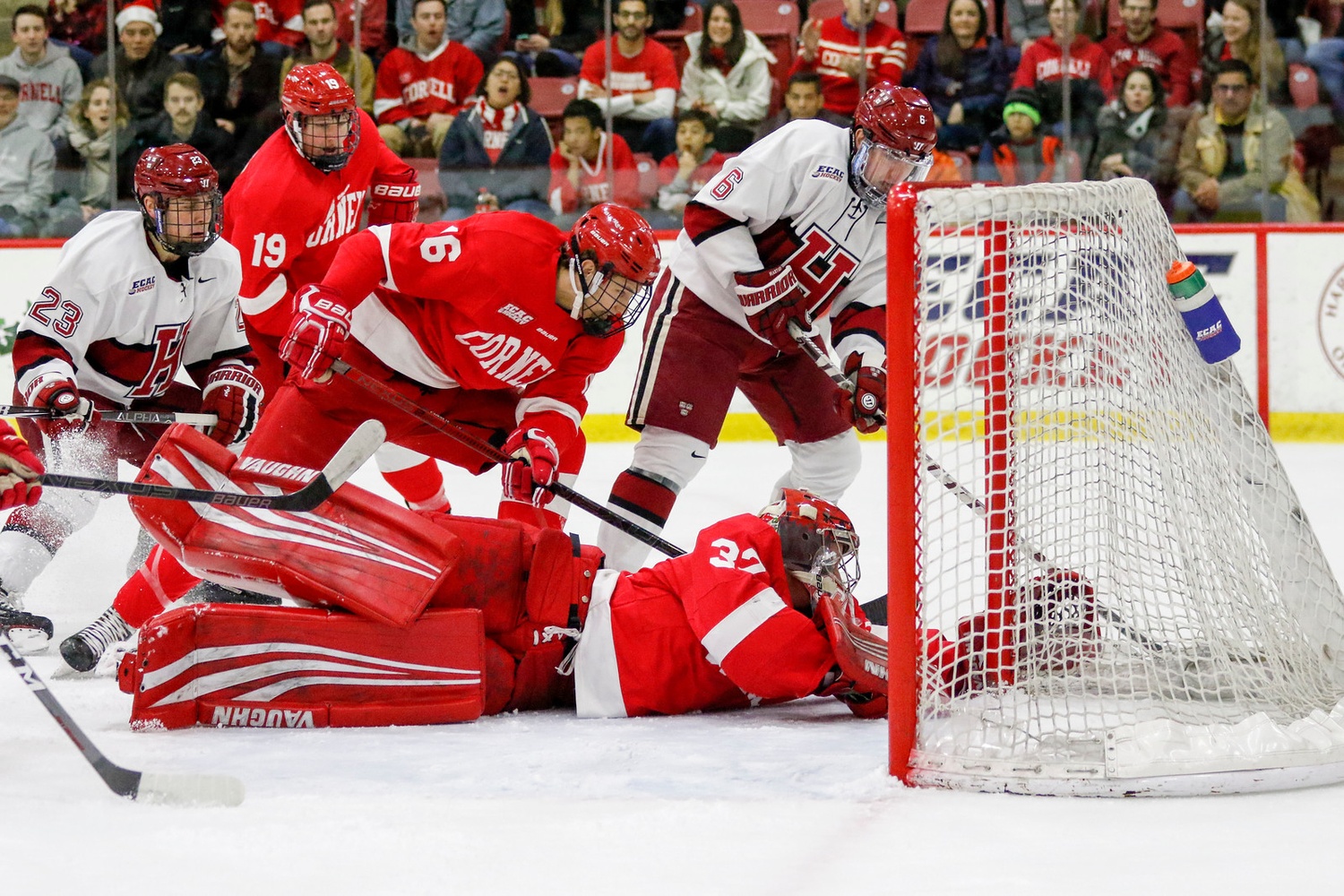 At the other end of the ice, Lackey turned in another solid performance (2.08 GAA, .933 SV%). The net-minder has picked up confidence in the past few weeks, and aside from a loss to ASU, has had good numbers for his past six starts. That positive, though not enough to secure a win, is a necessary foundation if Harvard hopes to overcome this stumbling block.

“I thought he was good,” coach Donato said. “I think he gave us a chance to win the game, and that’s ultimately what you need from your goalie. I thought he made some saves in the second to keep the game at 2-1.”

The Crimson will close out its 2018 play with a game at Bentley next week before hosting the Chinese National Development Team in late December. A win on Saturday could have had ranking implications for Harvard — and certainly for Cornell — in addition to boosting the team’s confidence heading into its winter hiatus, but the team will need to look ahead for a satisfying closeout to the year.