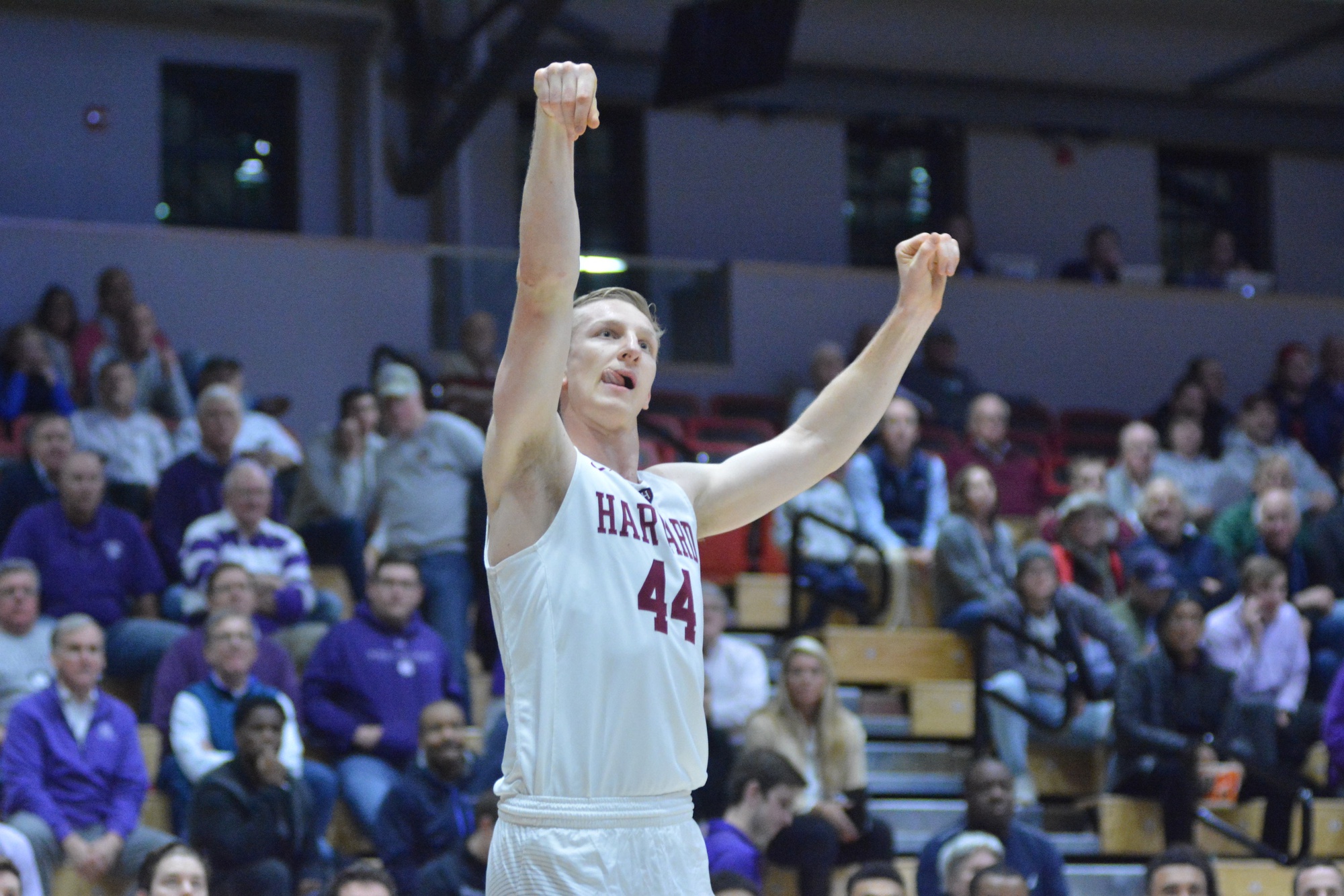 Junior forward Henry Welsh started again in this afternoon's contest and made the highlight reel with a breakaway dunk. By Henry Zhu
By Jack Stockless, Crimson Staff Writer

Just over twenty seconds separated point guard Christian Juzang and the Harvard men’s basketball team from heading to the locker room at halftime. Juzang dribbled the ball back and forth near the logo, bleeding nearly every second off the clock. As time was just about to expire, the junior advanced slowly toward his defender and then rose up, nailing a straightaway three-pointer to close out the half. The Crimson had taken a double-digit lead and appeared to be running away with the contest.

“Different players got us into a rhythm that really helped us,” coach Tommy Amaker said. “I thought the three at the end of the half by Juzang was a big basket to give us momentum going into the locker room with the ball coming out for the second half.”

That 11-point halftime lead proved difficult to overcome for George Washington, as the Colonials (3-9) fell behind by as much as 22 with three minutes to play in the contest. Harvard (5-5) walked away with a 75-61 victory to snap a short two-game skid.

After starting the afternoon just 1-of-10 from beyond the arc, the Crimson opted to continue shooting the deep ball, and it paid off handsomely. The hosts finished the game 9-of-20 on their remaining three-point attempts, providing the necessary firepower to maintain a double-digit lead until the end of regulation. More accurate shooting was especially crucial in the second portion of the opening frame, as it was a back-and-forth affair through the first 14 minutes of play.

George Washington ran a stringent press through most of the game, forcing the rock out of the hands of Harvard’s most capable ball handlers. This pressure was likely part of the culprit for the Crimson’s slow scoring start, as several times players opted for deep threes since the Colonials’ press had bled precious seconds off the shot clock.

Harvard countered with similar defensive intensity. Each team capitalized on the other’s turnovers — George Washington scored 13 points off giveaways and the Crimson added eight. The Colonials edged Harvard in blocks, 3-2, while the hosts picked up seven steals to the visitors’ five.

“We really just emphasized picking up our defensive pressure,” junior guard Justin Bassey said. “Start picking up three-quarters court, trying to turn them, getting them to play a little bit faster to more of our pace, controlling the pace of the game. That was huge for us and that led to a lot of easy points offensively.”

Harvard’s ability to quickly find shooters along the perimeter also paid dividends. With 11 minutes gone in the first half, sophomore Rio Haskett notched a steal and sprinted down the court, quickly dishing to freshman guard Noah Kirkwood all alone in the left corner for a three-pointer.

Kirkwood tied his career high in points with 20, and he added six assists and four rebounds in 30 minutes played. The freshman had an efficient shooting performance, going 7-of-12 from the field and 4-of-8 on threes. Amaker extolled the rookie for his ability to do it all, but he also noted that he would be expecting a consistently high level of play from the promising guard. Kirkwood’s impact is especially important due to the continued absence of juniors Bryce Aiken and Seth Towns.

“He’s playing a lot like the young man we had in the past who is probably the most decorated player to ever play for us, which is Wesley Saunders,” Amaker said. “He’s playing in a way like Wesley how he handles the ball, rebounds, leads the break. Wesley was our best perimeter defender. Noah isn’t that yet, but we expect him to become a better defender. But he’s in the mold of that type of player in our system for us and how we utilized Wesley through the years.”

Along with Kirkwood, another first-year with a notable impact on this game was forward Mason Forbes. Making his first start as a member of the Crimson, Forbes was 3-of-5 from the field for six points and six rebounds, four of which came on the offensive end. Second-chance points were crucial in the team’s win — Harvard tallied 17 points from offensive rebounds compared to just five for George Washington.

“We always try to get on the boards,” junior forward Chris Lewis said. “And I think today we just came in with high energy, and Mason was the one who really started us off with offensive boards, and we really just followed his energy.”

Lewis, a regular starter, came off the bench for the Crimson and notched eight points and six rebounds in Saturday’s contest. In all, Harvard sent 17 of its players out onto the floor. Freshman forward Kale Catchings made the most of his six minutes, scoring four points on a layup and two free throws.

“We had 16 assists,” Amaker said. “That’s a part of sacrificing, being unselfish. I’m pleased with that thought that we’re following through with having a team that’s willing to sacrifice.”

Next up for the Crimson is a trip to Atlanta, Ga., where Harvard will take on Mercer at State Farm Arena on Dec. 29.