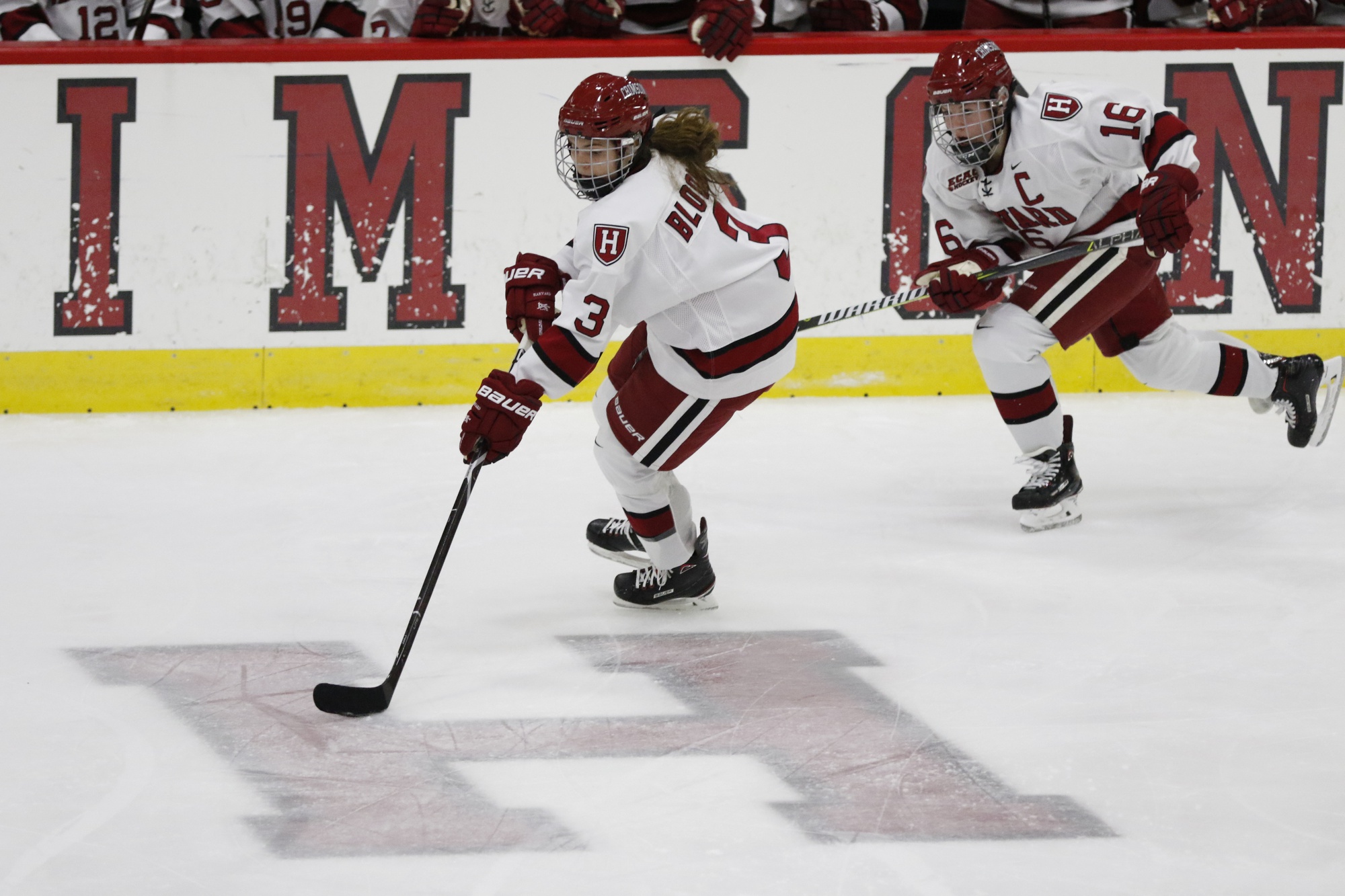 The Crimson completed a weekend sweep with a 4-0 shutout over Union. By Timothy R. O'Meara
By Mohamed Ahmed, Contributing Writer

Early in the second period, with the game still tied at zero, sophomore defender Emma Buckles rushed forward and intercepted a Union pass. Speeding towards the Dutchwomen net, Buckles unleashed a deadly drag shot, which flew by the Union goalie and slammed into the net.

“We had a lot of opportunities and pucks were not going in,” junior forward Kat Hughes said. “When Emma Buckles scored, it was a sigh of relief. We started to play a little more relaxed and settle into our game.”

The next three goals scored by Harvard would fall late into the third period, starting with freshman forward Kristin Della Rovere.

Taking advantage of a two on one opportunity, Della Rovere and Hughes outflanked the sole Union defender and raced towards the Union net. Near the goal, Hughes took a swift shot which bounced off the goalie. Moments later, Della Rovere appeared next to the goal and redirected the rebound which hit the top corner, doubling Harvard’s lead.

Harvard’s third goal would come twenty-nine seconds later, thanks to a tag team effort by freshman forward Anne Bloomer and sophomore forward Brooke Jovanovich. Near the Union goal, Jovanovich shot a pass towards Bloomer who capitalized on the shot opportunity and streaked the puck past the Dutchwomen goalkeeper.

“Every line contributed and every line scored back to back,” senior forward Bradley Fusco said. “We just kept building off each other and it was a three line effort.”

Harvard not only dominated offensively but defensively as well. Leading the efforts was freshman goalie Lindsay Reed.

Reed, coming off a strong performance against Rensselaer, recorded another shutout game, with a total of thirty-four saves.

“She came out with two shutouts in a row,” Hughes said. “That was really rewarding for all the work she has put in. It was nice to see her get that accomplishment and help the team out.”

Saturday’s game contained a number of key performances from freshmen players, including Lindsay Reed, Kristine Della Rovere, and Anne Bloomer, signaling the level of depth and talent present on the Harvard team.

“It has been really fun to watch them from week one until now,” Hallett said. “The college level it is so different, it is a lot faster and they all have developed really into that. Every single one of them comes ready to play and ready to go come game time.”

Completing its weekend sweep with back to back victories, the Crimson look to carry that momentum into the last two games of the semester. They face the Maine Black Bears at the Bright-Landry Hockey Center on Dec. 7, and the New Hampshire Wildcats at Durham, N.H. on Dec. 8.

“We only have these two games left in the semester,” Hallett said. “The goal is to win those games and finish on a high note was we enter the break and continue to train really hard to prepare ourselves for the second half of the season.”