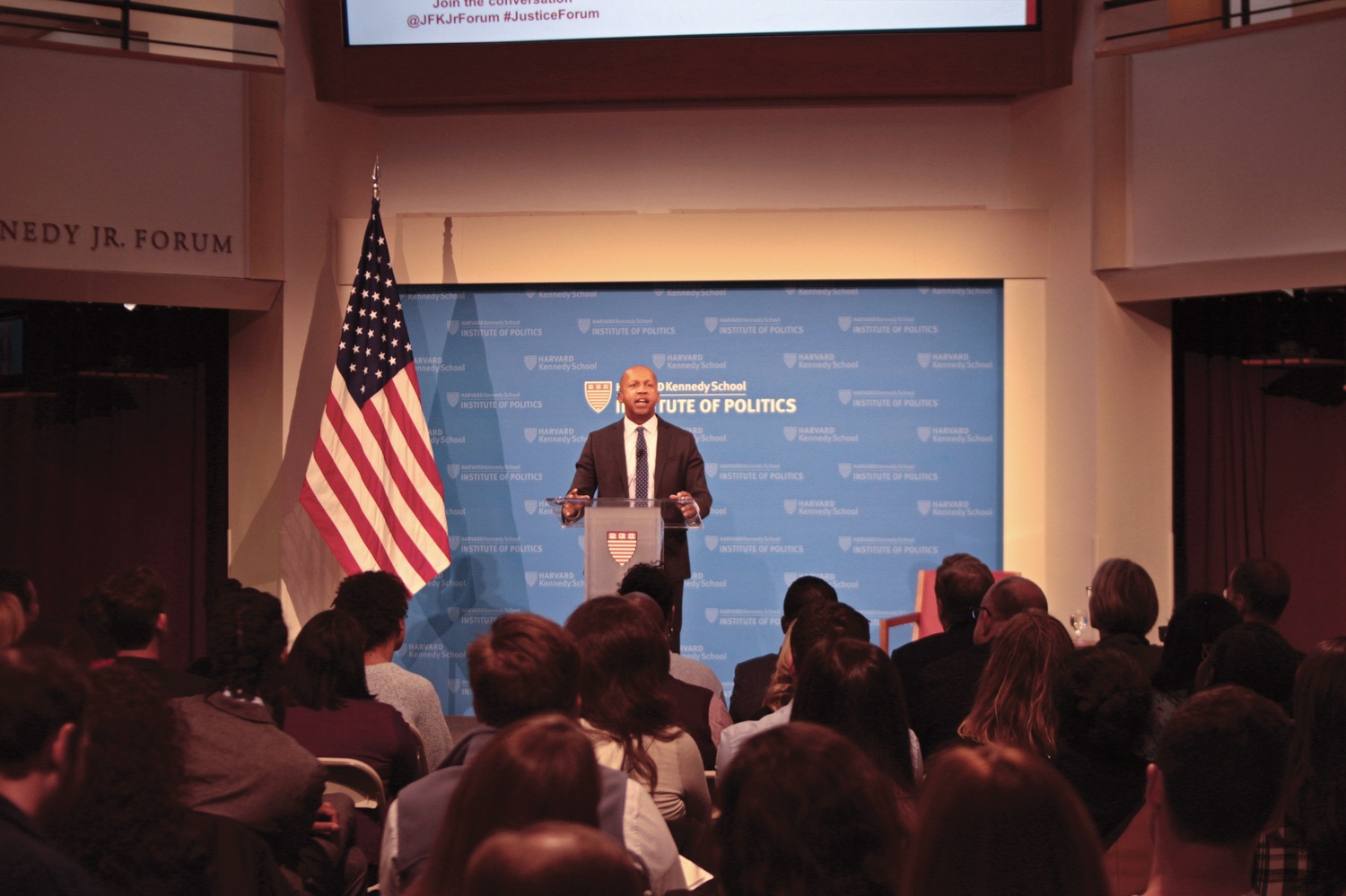 Renowned civil rights lawyer Bryan A. Stevenson addressed a packed John F. Kennedy Jr. Forum on Tuesday evening, sharing personal stories of both sorrow and success from his career in criminal justice reform, and calling on attendees to “change the narratives” that Stevenson said wrongly tint the way we think about justice.

Stevenson stressed his conviction that to make maximal change, one must spend time in the places where the problem exists—rather than in elite spheres of academia or politics.

This, for Stevenson, means “getting and staying proximate” to those who are behind bars or at risk of ending up there—“the people who are poor and suffering and marginalized.”

Stevenson received a standing ovation both before and after the hour-long event, which was hosted by the Institute of Politics and moderated by Sarah E. Wald, senior policy advisor and chief of staff to the dean at Harvard Kennedy School. Former University President Drew G. Faust and many freshman members-elect of Congress, who were on campus for an IOP conference, attended the event.

Stevenson — founder and executive director of the Equal Justice Initiative — has dedicated his career to challenging mass incarceration and discrimination in the criminal justice system. He has fought against lengthy prison sentences, advocated for children who are prosecuted as adults, and worked to get people off of death row. In 2012 he argued before the United States Supreme Court in a landmark case that ended life sentences without parole for all minors. Stevenson has degrees from both Harvard Law School and Harvard Kennedy School.

After a brief introduction by Wald, Stevenson framed his speech through the overarching question of how to change the world.

“I really just want to reinforce the importance of what brought you here,” Stevenson said. “I believe we can change the world, and I think we need to change the world.” Stevenson then cited a number of studies highlighting the U.S.’s incommensurate rate of incarceration and the racial and socioeconomic disparities in the criminal justice system.

“But I didn’t come to talk about the problems,” Stevenson said after a few minutes of presenting data. “I want to use the limited time I have to talk about solutions.”

He said he realized the importance of personally interacting with disadvantaged individuals during his time at the Law School, when he traveled to prisons to represent death row inmates.

“I met a condemned man who was literally dying for legal assistance,” he said. “Even though I was very ignorant of most of the things that he needed answers to, my proximity, my witness seemed to make a difference.”

Stevenson then discussed how reframing social narratives can make a big difference in public policy. Recounting his experiences in the criminal justice system, he said changing social stereotypes both reduces fear and increases hope.

“I’m here to tell you that if we allow ourselves to be governed by fear and anger, we’ll tolerate things we’re not supposed to tolerate,” he said. “Hopelessness is the enemy of justice.”

Stevenson concluded his speech with a call to action, encouraging audience members to do things that are uncomfortable and inconvenient.

“I looked and did some research, and I tried to find an example where justice prevailed, where equality triumphed, and nobody had to do anything uncomfortable or inconvenient,” he said. “I can’t find any examples of that.”

After the event, several students said they were energized by Stevenson’s address.

“It was a blessing,” first-year HKS student Bernice M. Fokum said. “I think Bryan Stevenson is the orator of our generation. He was able to solidify concepts that are so difficult to bring to an audience of this magnitude.”

“I’m slightly overwhelmed with really positive emotions, and very inspired for the future,” she said.