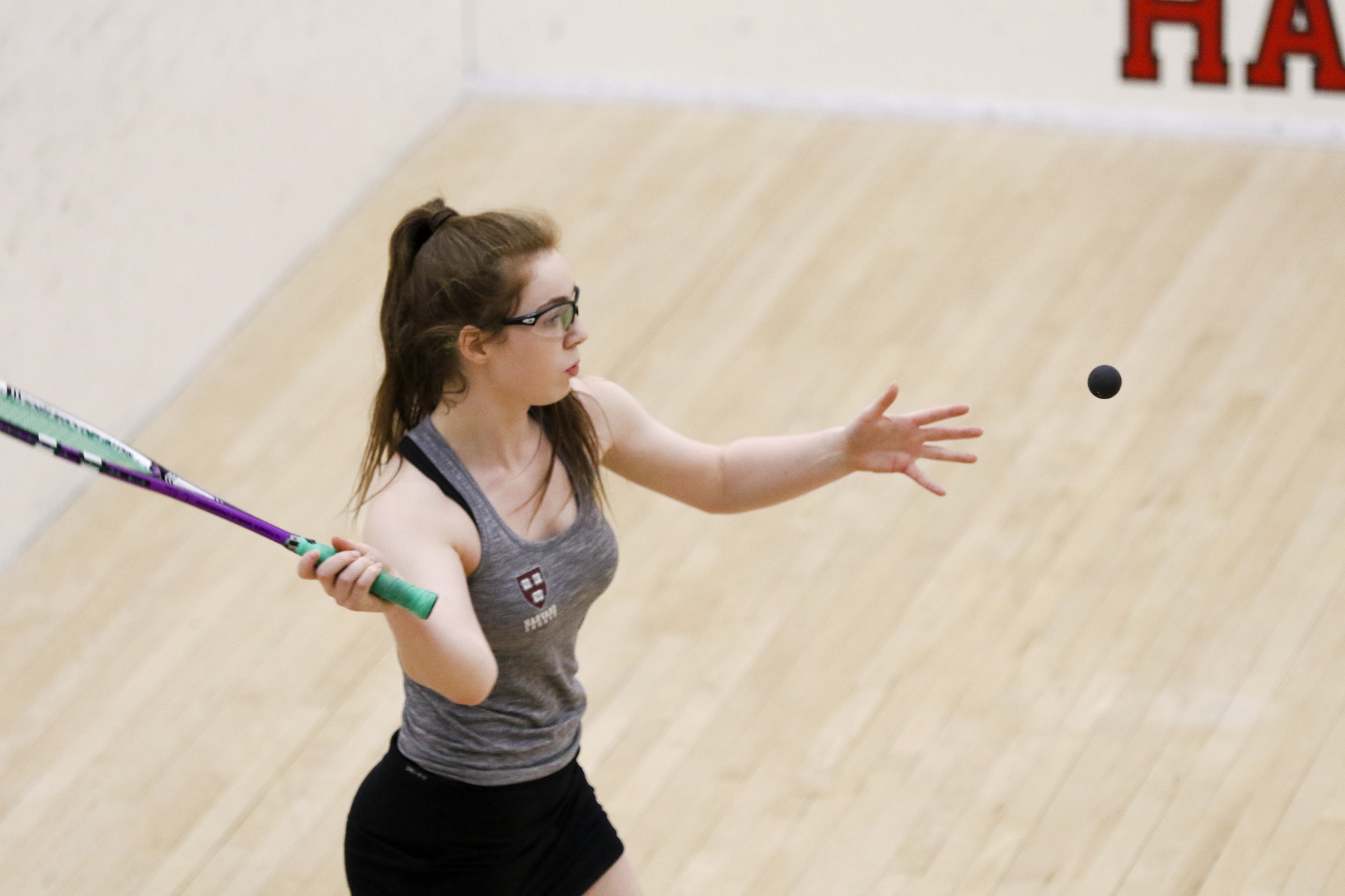 Dartmouth was no challenge for the Harvard men's and women's squash teams. By Timothy R. O'Meara
By Jackson Delgado, Contributing Writer

“Dartmouth is a strong team this year, so we definitely wanted to kick [the Ivy League season] off on the right note and get a decisive win,” men’s sophomore Sam Scherl said. “The rest of the team and I were just really focused today, and ready to get the job done.”

Crouin, the Crimson’s number one player, cited getting off to a strong start as the factor that propelled him to a sweep victory in the inaugural match of his career.

“The first few points of the first game were important,” the Var, France native said. “I showed [my opponent] that I was not going to give him anything. I did well in the first game, which gave me a confidence boost for the rest of the match.”

Crouin added about his debut, “It was my first match for the team, so I was really happy to play and I wanted to do well. It was great to get a point for the team.”

Scherl, Harvard’s number four player, agreed with the importance of getting off to a hot start, and added that maintaining that performance is what allowed him to pick up his decisive win.

“Coming out strong is always important,” he offered. “[So is] keeping the intensity up through the match, not giving your opponent anything to work with, and keeping your foot on the gas. [My opponent] was a strong player, but I kept him under control.”

The team will look to use this set of matches as a springboard as it considers the rest of the season that lies ahead.

“The most important part of our season is January through February,” said Scherl, the South Orange, N.J., native. “Right now, we’re just ramping up and making sure that we’re not leaving anything on the court this year.”

On the women’s side, the Crimson was equally dominant against Dartmouth (1-2, 0-1), if not more so. The team won all nine of its matches, and all but one were taken three games to none. Each of the Crimson’s top six players — in order, senior Sabrina Sobhy, juniors Gina Kennedy and Amelia Henley, senior Kayley Leonard, junior Eleonore Evans, and senior Sophie Mehta — won in straight games.

Henley, much like Scherl did on the men’s side, saw unwavering play as the impetus for her victory.

“[My opponent] was definitely a solid player — she ran a lot and she received a lot of balls — so I had to be consistent with my game and keep up the pressure,” she commented. “I couldn’t step back at all; I had to be on my game.”

Henley, as did much of the women’s squad, certainly dictated play on the court. Effective timing of cross-court shots ensured that her opponent was constantly moving around and gave her the upper hand in the match. Even so, she viewed shot placement as something that the team as a whole could further improve upon.

“We’re working on being more creative and attacking,” Henley added. “It’s still being patient and not trying to win too early, but we’re working on our game at the front. I’ve been working on my deception, so a pivotal moment for me was when I hit cross-court from the front and [my opponent] ran in the opposite direction.”

Coming off of a national championship win last season, the women’s team looks to keep up its ability to outlast opponents on the court.

“We’ve been doing well with our fitness and our strength,” said Henley, the Kent, United Kingdom native. “We’re all really fit and ready to have a long, hard match. We want to be able to carry on longer than the other teams, and I think that proved true last season. When it got close, it seemed like our team was the one that could consistently keep up a good level of play even when we were tired.”

After a winter hiatus, both the men’s and women’s teams will pick up the season at home in the Murr Center. The women have a doubleheader against Stanford and Cornell, while the men are scheduled for a single matchup against Cornell.