On Monday evening, the Crimson topped Boston College, 5-4, in its second overtime game of the tournament 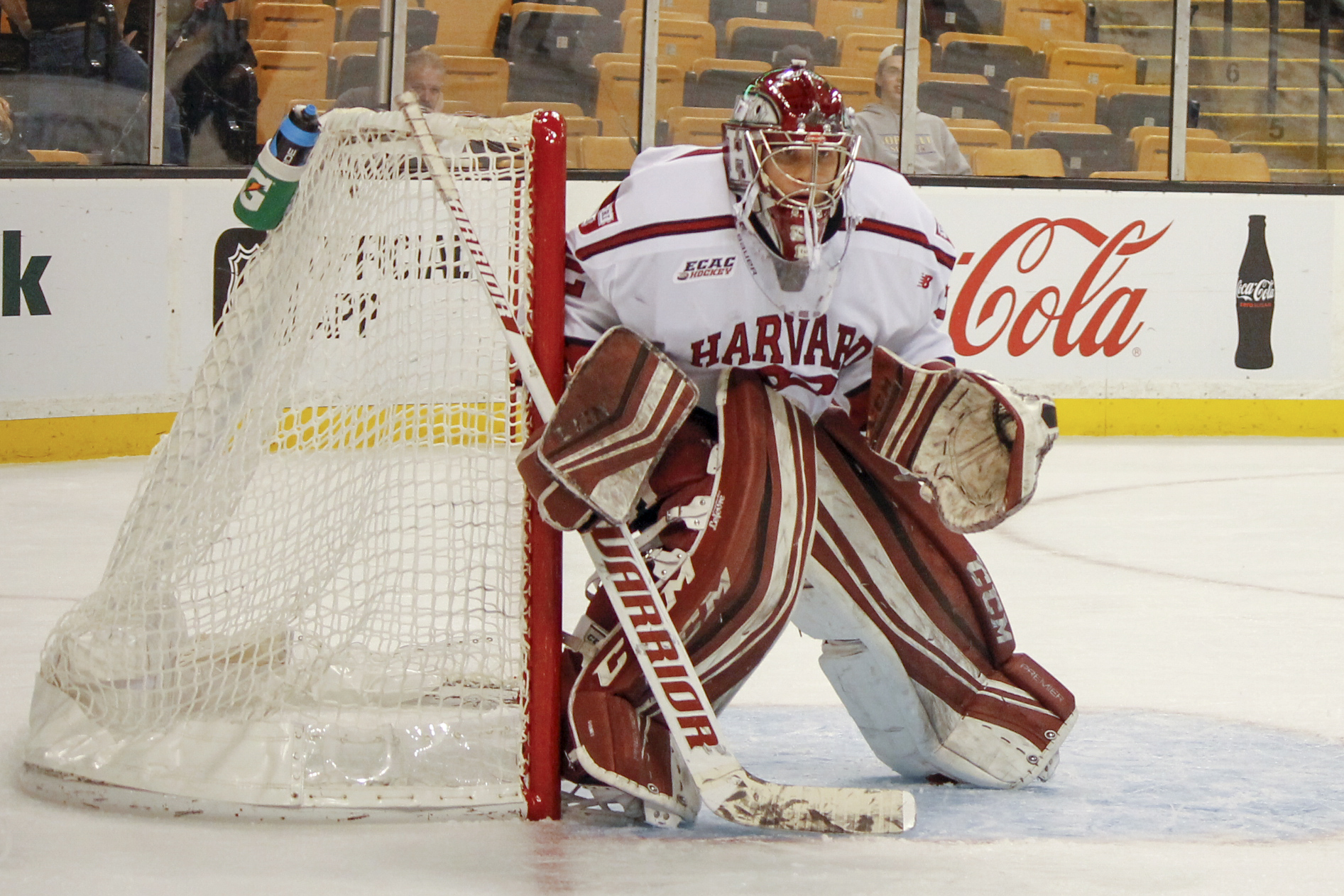 Net-minder Cameron Gornet looks on during his first career start in the Beanpot consolation game against BC. By Kathryn S. Kuhar
By Stuti R. Telidevara, Crimson Staff Writer

BOSTON — Forty minutes in, the Beanpot consolation game between the Harvard men’s hockey team and Boston College was tied 1-1. 20 minutes later, the teams were going to overtime even at 4-4.

The six-goal explosion in the third frame came from four different underclassmen, each potting the biscuit at the Beanpot for the first time in their careers. The overtime winner likewise came off the stick of a first-time scorer at TD Garden—but the culprit was senior forward Seb Lloyd.

Sophomore defenseman Adam Fox chased a dump-in from junior forward Lewis Zerter-Gossage, freeing the puck from the Eagles and feeding it into the slot. Lloyd caught the pass all alone in front of BC sophomore net-minder Ryan Edquist and beat him clean.

The win is also the Crimson icemen’s first triumph over a ranked squad all season. While the third-place finish is a far cry from the championship repeat Harvard had in mind going into the tournament, the team will look to build upon its offensive outpouring in conference play.

After a disappointing showing at Union on Friday, coach Donato put the lineup through the blender. Lloyd was promoted to the second line, while Zerter-Gossage, normally on the top line, swapped with sophomore Nathan Krusko on the second line. Two freshmen, Jack Donato and Mitchell Perrault, drew back into the lineup, as did junior defenseman Viktor Dombrovskiy. Most surprising of all, sophomore goalie Cameron Gornet made his first-ever start under bright lights, indeed.

“We’re still probably trying to find the right combinations,” coach Donato said. “When you lose one guy, that can affect multiple positions. But we also had some guys that were banged up, guys that were sick. So we had to do some line juggling.”

Earlier, sophomore blue-liner John Marino broke the 1-1 tie for Harvard less than five minutes into the third frame. Edquist kicked out a shot from Krusko, who received a nice drop pass from rookie linemate Henry Bowlby upon entering the zone. 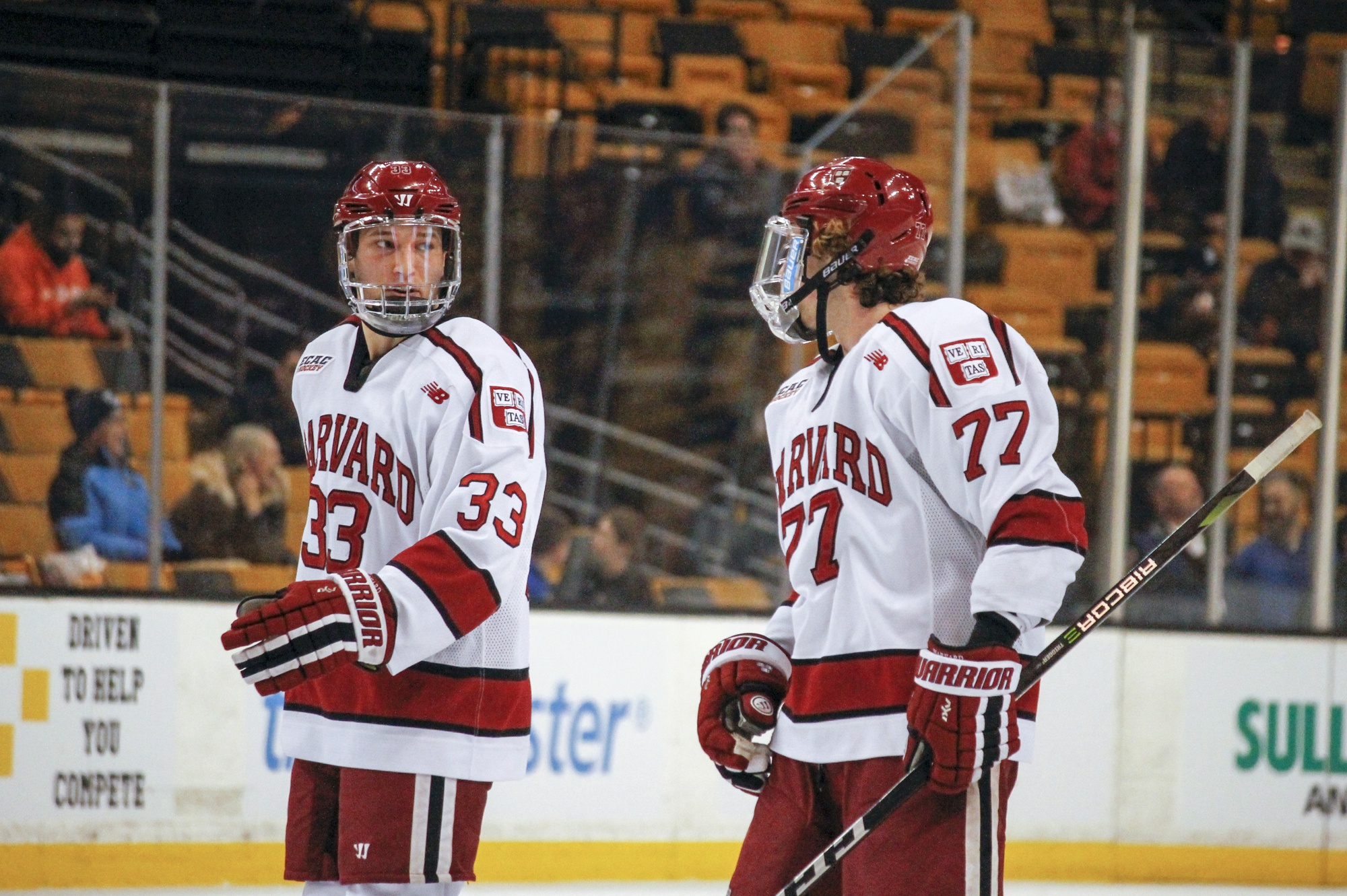 Though Edquist saved Krusko’s shot, Marino punched home the rebound. Soon after, Bowlby himself joined the party on the power play, collecting a pass to the left of the goal and walking in on the net-minder to shoot between Edquist’s wickets.

The Crimson’s 3-1 advantage did not go unthreatened, though. BC rookie Logan Hutsko, one of the team’s leading scorers, tipped a point shot past Gornet while falling to pull the Eagles within one. Later, Perrault and Donato found themselves on a 2-on-1, with Donato firing past Edquist for his first career goal, giving Perrault his first career point on the assist.

“[His] mom, who would’ve been the most excited, was probably somewhere over the North Pole on her flight,” joked coach Donato, referencing his wife’s trip to Pyeongchang to watch older son Ryan’s Olympic play. “He’s worked hard, and I thought he played an excellent game.”

Hutsko shoveled in a loose puck two times in less than a minute late in the third frame to complete his hat trick and tie the game, 4-4. Hutsko’s tallies mark the first BC Beanpot hat trick in 18 years. Ultimately, though, neither his heroics nor the Eagles’ momentum near the end of regulation time could seal the win for the team.

“[Our momentum] carried over into OT...but we just couldn’t capitalize,” said BC head coach Terry York. “Every coach talks about playing 60 minutes, but...we just have to keep getting better so we can play longer at a high tempo.”

One streak that Harvard will be glad to see broken was its dry run on the man-advantage. After not scoring on 17 straight power plays, the Crimson finally struck gold on its first attempt of the night midway through the first period. Fox shot the puck from the left point into the bodies in front of the net. An attempt by sophomore forward Ty Pelton-Byce was then tipped home by Zerter-Gossage for his first career Beanpot tally. With that and Bowlby’s goal in the third, Harvard went 2-for-4 on the man advantage.

Gornet, though forced to scramble on several of the BC’s goals, turned away 30 shots on the night (3.83 GAA, .882 SV%) and kept BC off the scoreboard for over 38 minutes. Though the team conceded its two-goal lead before ultimately seizing the game in overtime, the night’s goal-scorers differed from the usual suspects for Harvard. This marks a step towards the scoring-by-committee the team must aim for in the absence of Ryan Donato. Additionally, Fox tied a career high with three assists.

The Crimson returns to conference play next weekend against St. Lawrence and No. 7/3 Clarkson, looking to regain ground in the ECAC in its last home games of the regular season.